And they're doing so with cool beverages.
Beverage | April 2019 | Danny Klein

Customer loyalty and routine has long been the battlefield for coffee chains. While that won’t change, there’s a new clash brewing: afternoon business.

Starbucks chief financial officer Pat Grismer said Thursday that Starbuck’s p.m. performance improved for a third consecutive quarter in Q2 2019. In fact, it was the java giant’s best result in the past three years.

This market-share grapple has gained momentum in recent quarters as cold beverages move deeper into the mainstream. Dunkin’ has made a concerted effort to drive transactions into this lagged daypart with happy hour deals, like $2 Espresso and afternoon snacking menus, such as the Go2s. Dunkin’ often touts compelling food and price as a powerful one-two punch in the afternoon. More than 75 percent of breakfast sandwich transactions include a beverage at Dunkin’, and there’s whitespace to court a similar combo play with cold drinks and on-the-go snacking choices, like Donut Fries.

Dunkin’ CEO Dave Hoffmann said last quarter that the $2 PM Break promotion built great traction in the afternoon daypart. The chain closed the year with three quarters of positive comps in the afternoon, he said, not unlike Starbucks' stretch.

“We think that’s a lot of white space for us, and again, early days, but we like the improvement that we’ve made in the p.m. business, but it’s the combination of great products at a compelling price,” he said.

The much-publicized espresso launch for Dunkin' skews a younger consumer and has played well with the “all-important switchers between brands,” Hoffmann added. The espresso category grew north of 35 percent for Dunkin’.

“I’m quite confident over time that as more and more of our current customers who haven’t necessarily been espresso drinkers take advantage, for example, of our [$2 deal], they’re going to convert into espresso lovers, and it might be the second trip of the day for an afternoon indulgent espresso beverage,” CMO Tony Weisman said.

Starbucks is spending $100 million on startups.

Starbucks is getting there, Grismer said, with an improved in-store experience that’s driving improvement across all dayparts. Beverage, its highest-margin category, contributed three points of comp sales growth this past quarter. And within that segment, Starbucks’ cold platform, led by refreshment, Iced Espresso and Iced Coffee, provided a jolt, Grismer said. And there are underlying trends that offer further optimism.

“While much of the beverage comp sales growth was driven by ticket, close to half of the ticket growth was from beverage mix and attach, demonstrating that our higher-margin premium offerings resonated with customers and customers bought more beverages per transaction,” Grismer said.

Starbucks beat Wall Street expectations for the third straight quarter in Q2. The brand’s same-store sales climbed 4 percent in the U.S. versus the prior-year period thanks to a retooled menu that drove afternoon transactions. Traffic was flat. The results were the same as Q1 in the Americas market, which remains a positive trend given where Starbucks was a year ago. Visits fell during the final quarter of 2018 and Starbucks reported global comps of 1 percent in Q3 that year—its lowest since it began sharing financials on its investor site in 2011. 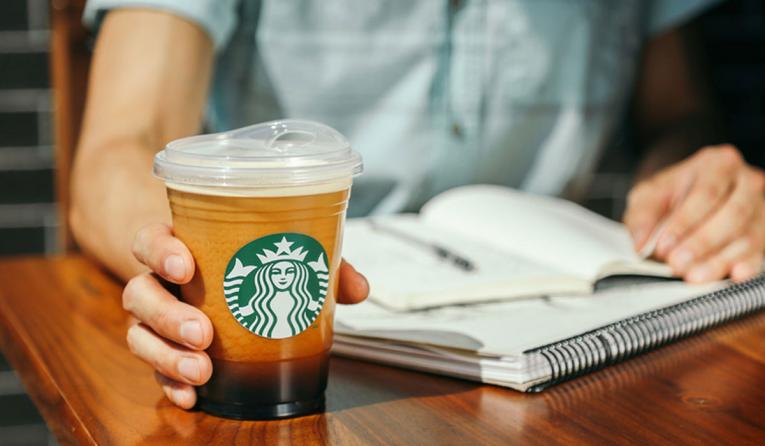 Starbucks is on a mission to get greener as well.

Returning to the afternoon note, Roz Brewer, Starbucks’ COO, said the chain is seeing a boost from its updated Rewards program as well. The new, tiered structure, which encourages sign-ups by offering rewards faster, went into effect in April and has been met with some opposition from loyal guests. The main point of contention stemmed from the shift in redemption structure. Instead of exchanging a flat 125 stars for a free food or drink item, for instance, Starbucks now apportions free items at different levels of stars. Simply, you have to hit a certain level to access rewards, which can take more stars than it did before.

“The second quarter we've seen a slight uptick in our afternoon performance,” Brewer said. “We believe we'll continue to see that based on the kind of beverage innovation that we are seeing.”

She added that Starbucks’ non-reward members tend to shop with the company in the afternoon, making beverage innovation Starbucks’ strongest weapon in the p.m. market-share battle. Its sales this past quarter were driven by a 4 percent rise in average check. Starbucks is unlikely to draw consistent afternoon business from convenience or price, like Dunkin’ would.

And that’s been a common theme for Starbucks over the years: Separating from competitors with customer-experience and “third-place” positioning, with retail and Reserve stores that serve multiple occasions instead of just standing as hangout spots.

In recent quarters, however, this rise in check was accompanied by sagging traffic. The flat figures over the past two quarters aren’t bouncing off stellar prior results exactly, yet they’re headed in the right direction, executives said.

The Rewards note fits given that afternoon transactions for coffee chains tend to be more spontaneous than early ones. So there’s less reliance on repeat users and other benefits that often come from loyalty programs. That gives Starbucks some whitespace to incentivize later visits with the promise of faster rewards and promotions, and get some of those digitally engaged customers, who might not be signed up, to take the next step.

CEO Kevin Johnson added that Starbucks’ cold beverage platform gained momentum across multiple dayparts in Q2 and was supported by the brand’s second-most viral social campaign in history—the Cloud Macchiato, promoted by signer Ariana Grande, who has some 62 million Twitter followers. The drink took its “cloud” name from Starbucks’ cold foam innovation, first introduced in 2014 and taken widespread in April 2018.

Johnson said Starbucks received “very strong customer response” to its matcha beverage platform as well. Additionally, the chain crossed the 50 percent for deployment of its Nitro Cold Brew in U.S. company-run stores. It’s on track to hit 100 percent by year’s end, he added. 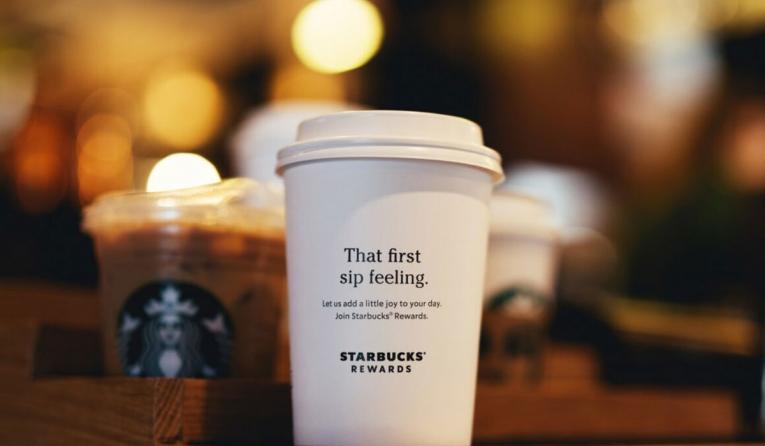 Starbucks rolled out a new Rewards program in April. Some of the feedback was mixed, but it's still early.

More on the Rewards contention

Starbucks grew its active member base by 500,000 customers in Q2, a 13 percent increase that brought its numbers to 16.8 million. Starbucks Rewards members accounted for 41 percent of sales in the U.S. this past period. Johnson called the rollout of the new program “smooth,” and said it offers greater choice and flexibility. In addition to earning two Stars for every $1 spent in Starbucks stores, members can now access free brewed hot coffee and tea refills, a free birthday treat, and exclusive personalized offers along with additional opportunities to earn Bonus Stars through monthly Double Star Days.

Howard Schneider, VP of loyalty strategy at Kobie, said the new progam is more impactful for members. "Starbucks’ Kevin Johnson said two magic words: choice and flexibility," he said. "Effective loyalty programs should avoid the one-size-fits-all approach. The essence of a well-designed program is to understand what motivates individual customers or segments and direct the right offers, content and experiences to the right customer at the right time in order to optimize the lifetime value of each customer. Starbucks’ new program offers meaningful value to more members. This allows Rewards to engage more customers and reinforce the behaviors they want to drive: afternoon and evening visits, more high-margin items on the ticket and repeat visits."

The breakdown, which some customers have compared to frequent flier programs, looks like this:

As noted before, Starbucks hopes it can convert some of its digitally registered guests who aren’t Rewards members—a sizable group that counts 15.3 million people.

Despite some of the kick back, Brewer says the negative response has been far less than in volume than past years when Starbucks made a Rewards change.

“The vision for the program is to really provide more access to potential members,” she said.

The first part of that, Brewer added, is allowing new members to gain rewards earlier. The first reward comes after two to three visits. And it’s launched with a new Rewards app that lets employees know how many stars the customer has available and then explain the benefits.

“We think that is keeping any of the dissension down just because our partners are now able to explain the program right from the POS system and tell them what's available to them,” Brewer said.

To dial into the space further and just how fierce the loyalty war wages, Dunkin’ just last week introduced a multi-tender test at more than 1,000 locations nationwide. It gave guests, for the first time, the chance to earn points regardless of how they pay.

Previously, DD Perks members could only earn points toward free beverages by paying via an enrolled Dunkin’ gift card. The test allows customers to garner points whether they pay by cash, credit, debit or a Dunkin’ gift card. Guests accumulate points with every purchase by scanning a DD Perks loyalty ID QR code in the Dunkin’ mobile app or with a new physical loyalty card, which is available at participating restaurants, before payment.

"Dunkin’ is also on the right track with their test of multi-tender loyalty. From my experience, it's a best practice for loyalty programs to be tender-neutral to reach the maximum number of customers," Schneider said. "In [quick-service] and retail environments, marketers can always offer a bonus to customers using the preferred form of payment, but a tender-neutral program allows all customers to engage."

Last quarter, Dunkin’s rewards program represented about 12 percent of Dunkin’s visits, with 3 percent on-the-go mobile. It hit 10 million members in 2019, roughly five years from inception. Dunkin’ has added about 500,000 members per quarter. Dunkin’s said that the single greatest barrier to broader participation in its Perks program was a construct that required pre-loading a credit card in order to participate and use on-the-go mobile. This multi-tender test, which could go national if successful, addresses that.

Another change that could have Rewards implications for Starbucks is delivery. Starbucks said earlier it would bring delivery to roughly 2,000 stores by spring. Johnson updated progress Thursday, noting the company expanded the program in Q2 to nearly 1,600 units across seven major markets.

Johnson said Starbucks’ early focus is to drive customer awareness that leads to trial and adoption of the new channel. “This approach is enabling us to refine the program as it grows and ensure a quality customer experience,” he said.

Starbucks grew by 319 new stores in Q2, bringing the total to 30,184—an increase of 7 percent over the prior year. But 94 percent of those net new openings were outside of the U.S., while 88 percent were licensed.

Meanwhile, in that same period, Starbucks has boomed 17 percent to 3,789 restaurants in China from 3,236.

This past quarter, Starbucks debuted 66 locations in the Americas—67 net licensed growth. The corporate footprint dropped by one unit. That was an expected slowdown from the prior-year quarter’s growth of 187 total locations.