How a Beloved Burger Chain Created Its Timeless Appeal

Founder Patrick Terry worked in P. Terry's restaurants from open to close for years in order to get the experience right.

Pass by a P. Terry’s burger joint in Austin, Texas, and you’d be forgiven if you thought it was a local staple that had been around for generations. From the Googie architecture to the simplistic branding to the roadside burger-stand vibe, P. Terry’s oozes nostalgia, harkening back to simpler times and simpler menus.

And that’s exactly what founder Patrick Terry intended when he opened the first P. Terry’s—in 2005.

For the last 15 years, Terry has been dedicated to maintaining that timeless feel, not only through design but also through top-notch food quality, best-in-class customer service, and a value-oriented menu where the most expensive burger is $3.95. The brand has expanded to 15 Austin shops and one in San Marcos, Texas, and it hired Todd Coerver—formerly of Larkburger, Taco Cabana, and Whataburger—as CEO last year to head expansion into other parts of Texas.

Reflecting on how he built a local cult favorite, Terry sat down for QSR’s podcast “Fast Forward” to share his secrets to success.

1. Be patient for the right location

Terry was in his mid-40s when he and his wife, Kathy, opened the first P. Terry’s. He’d already opened and sold two pizza joints and worked in advertising, but his heart had long been set on opening a restaurant serving burgers, fries, and milkshakes.

There was a location in South Austin that he fell in love with around 2000, but another company had leased it. It was small, just a walk-up window with a drive thru, but Terry was convinced it was the right spot. He waited five years until the lease became available, then pulled the trigger on the location for the first P. Terry’s Burger Stand.

“I just kept thinking, for some reason, that's just where I want to start,” he says. “Looking back, it's probably more luck than smarts, but something that size is controllable … especially when you're learning the business. So it turned out to be extremely helpful to do that.”

It also created a great marketing opportunity. Customers lined up all the way to the street, essentially giving the fledgling brand a billboard for potential customers who drove by.

The small square footage also proved pivotal in establishing P. Terry’s commitment to quality. While five major burger franchises neighbored his restaurant—each, he said, with trucks showing up every few days to deliver frozen product—P. Terry’s was forced to take more frequent deliveries of fresh product because it didn’t have enough storage room for anything more.

Product quality became P. Terry’s calling card. Serving fresh Black Angus burgers at $2.60 (hamburger), $2.85 (cheeseburger), and $3.95 (double with cheese), the brand established itself as a better value than the franchises next door. And when it came time to open unit No. 2, Terry says, that commitment to freshness didn’t change—even when they had much more storage space available.

“When you open the second store with a little bit more room, you don't all of a sudden say, ‘Oh, well, let's stop. Let's just start half-assing it because we can,’” Terry says. “You're just like, ‘No, this is how we've been and it works for us.’ There wasn't any reason to change. It turned out to be one of those blessings.”

2. Get in the trenches

Plenty of people romanticize the notion of opening their own restaurant, but many forget that actually running restaurants is unglamorous—and hard. Then there’s the fact that restaurants are notoriously risky, with the majority failing in their first couple of years.

Terry says opening P. Terry’s was “a leap of faith,” but one he was willing to take so long as he could find a “soft landing.” With so much at stake—right down to his name on the sign—Terry says he became laser-focused on running good restaurants, which, for him and Kathy, meant working in them open to close for the first couple of years.

“When I opened it up, it was just heads down. Every customer was the most important thing in the world,” he says. “I mean, when we would screw up an order, I would think the world had come to an end.”

P. Terry’s had been Terry’s long-term dream, and since he knew how he wanted the burgers, fries, and shakes to taste, working in the restaurants afforded him the ability to get it exactly right and then hire on people who could learn the same. Getting in the trenches with his employees became key to building P. Terry’s into the multiunit success that it is today.

Most importantly, being in the restaurants led to Terry creating three of the company’s cultural pillars.

3. Take care of your employees

In this tight labor market, restaurant operators are fighting to hire good employees and then keep them around. While good pay is a plus, additional incentives become the differentiator in getting someone to work at your restaurant versus your competitor.

Terry says P. Terry’s pays “aggressively” for the Austin market—$11–$14 per hour depending on position and experience—but more importantly leverages three employee programs to invest in its team members.

The first is Christmas bonuses: Every employee gets $10 for every month they’ve worked for P. Terry’s. “So every month you work for us adds $10 to the pot,” Terry says. “And we have people working for us for 15 years, so they're getting pretty decent little bonuses.”

Secondly, P. Terry’s offers its employees no-interest loans. The incentive originated from an early employee, Vinny, who couldn’t get to work because his truck had broken down. Terry loaned Vinny money for a cab to the restaurant—he was the fry guy, and Terry says he hates doing fries—and then a couple hundred bucks to fix the truck. That simple act eventually became an established program in which, Terry says, the company has $30,000–$40,000 loaned out at any given time. (And 14 years later, Vinny still works for P. Terry’s.)

Finally, every P. Terry’s employee receives a cake on their birthday. This all began with an early employee, Rosario, who worked a long day beside the Terrys before they discovered it was her birthday. Kathy baked a cake for Rosario the next day, and the Terrys recorded everyone else’s birthdays, too, baking cakes for all of them on their birthdays.

Kathy kept baking cakes for every employee birthday even as the brand grew, and Terry delivered them, going the whole nine by lighting a candle and singing “Happy Birthday.” They did this until the company had about 300 employees, at which point they designated a corporate employee to be the full-time cake person, driving around in a company-owned car to deliver employee birthday cakes.

Terry says these three programs have become a part of the P. Terry’s DNA.

“Those three things really can help to define who you are and what you do, and it's never for the sake of doing things differently,” he says. “It's just that's what we saw while we were doing it. If we hadn't been working every day, none of those things would have happened.” 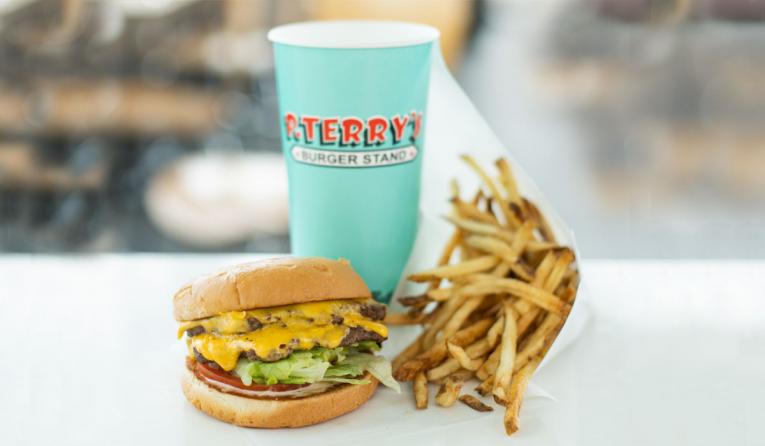 P. Terry's most expensive burger, the double with cheese, runs just $3.95 (a combo with fries and a drink is $7.60). The burgers are made with all-natural Black Angus patties.

Burgers for $4 or less are nearly unheard of today outside the major burger franchises. But Terry won’t budge on the value front, believing that the low prices ensure P. Terry’s is a dine-out option for all demographics, and especially families.

But Terry also says the company is tight about expenses, being careful not to waste any money. The brand doesn’t do much marketing, relying instead on word of mouth and more grassroots efforts. The headquarters aren’t anything fancy, just a small, nondescript office in a commercial park; Terry says general and administrative costs are kept very low. And Terry himself doesn’t treat the company like a piggy bank. For a long time, he put nearly all money back into the business, only taking out basic living expenses. He still pays for all food he eats from P. Terry’s.

“I think we've saved a lot of money by not playing big shot trying to impress anyone,” he says.

5. Get it right for the customer

When P. Terry’s launched in 2005, Facebook and Yelp were just fledgling services, and Twitter had yet to launch. But just because mistakes weren’t magnified back then like they are today on social media didn’t mean that P. Terry’s slouched on ensuring every guest experience was a good one. When he worked in the restaurants, Terry says, success wasn’t so much about trying to beat the competitor across the street as it was about creating an excellent experience from one customer to another.

“It's that constant need to get it right, it's never enough,” he says. “We just live in that world, and we accept it.”

That continues today, especially so in the social media world. P. Terry’s guests can text feedback on their experience to a special number, and texts go to not only the store manager, but also the area director, the VP of operations, and Terry himself. Guests who report any issues might receive a gift card to come back again for a better experience.

“If I can get to you fast enough to send you a gift card, you're less likely to call me an idiot [on social media],” he says.

This guest-first approach has been key to P. Terry’s massive success, a sort of grassroots way of building the brand from the ground up. “It's every day building your foundation, raising it up by each customer and taking care of each customer,” Terry says.

6. Do it for the right reasons

Fifteen years after Terry established P. Terry’s as an Austin burger icon, he’s able to take more of a back seat with company decisions. He’s not working in the restaurants—well, not as much as he used to, anyway—and he has a new CEO guiding growth.

Indeed, P. Terry’s is a success story, albeit one that’s still being written. And while it’s easy to look at Terry today and think he’s got it made, one must remember all the sweat equity that went into building P. Terry’s into what it is today. That wouldn’t have been possible if Terry hadn’t intentionally established a core mission early on, a mission to provide timeless, valuable, high-quality dining experiences to Austin diners.

Terry’s advice to young entrepreneurs getting into the restaurant industry is to have their own purpose for business, one beyond simply making money or getting rich.

“The money follows if you're doing it all right, you're taking care of the customer, and you're doing things fairly,” he says. “Everything else will follow. But if you put that out in front, I swear you think differently.”

The Wendy's of the Future has Officially Arrived
Former Wingstop CEO Looks to Turn Salad and Go into Category Leader
Is a Golden Era of Fast Food Upon Us?