Asking for Proof of Vaccination Could Be Tough Sell for Restaurants

NYC is trailblazing a path that might change everything, again.

New York City on Tuesday unveiled its “Key to NYC Pass” program, which will require proof of vaccination for indoor gatherings, restaurant dining included. This covers workers and customers, with enforcement of the policy set to begin September 13. Notably, if you’re unvaccinated, NYC won't make exceptions if you’ve tested negative for COVID-19. No vaccination, no entry. Those unvaccinated customers will be asked to dine outside.

Is this the first Domino to fall in the wake of the Delta variant’s spread across America? The variant accounted for 72 percent of positive samples in the Big Apple in the past four weeks. And its growing prevalence led to new guidance from the CDC in July that recommended fully vaccinated individuals use masks inside public areas of high transmission rates. Two months prior, it guided vaccinated people to resume normal activities without masks.

A question now, however, is how consumers will respond. Operators are all too familiar with how challenging asking front-line workers to mandate masks was during the past 18 months.

“The federal government and some states are starting to issue vaccine mandates for employees; many private employers are doing the same,” says Greg Sterling, VP of Insights at location marketing platform Uberall. “I would expect proof of vaccination will be increasingly required to perform certain types of activities [e.g., travel]. That said, any mandates by businesses will be very uneven and highly controversial. I would expect to see it most in bars and restaurants and perhaps live performances.”

The San Francisco Bar Owner Alliance, for one, announced recently that it’s requiring proof of vaccination or a 72-hour negative COVID test before entry (the option NYC denied). The policy is voluntary, but SF Bar Owner Alliance president Ben Bleiman said 85 percent of bar owners are in favor of vaccine mandates, according to a survey.

NYC Mayor Bill de Blasio rightly noted Tuesday the “Key to NYC Pass” program was something “not everyone is going to agree,” with. “But for some people,” he added,” this is going to be the life-saving act.”

It seems more likely than not NYC’s decision is the start of another chapter in this COVID journey for restaurants. Datassential polled consumers to find out where they stood in terms of compliance and adoption with new requirements, and how this might affect what’s been a resurgent sales stretch for restaurants across the country.

Per the survey, compared with new mask wearing requirements, asking customers to show their cards or a vaccine passport will cause just as many guests to order from the restaurant in an off-premises channel (takeout or delivery) instead of dining in. However, nearly a third of guests said they would leave in this scenario, and many among the vaccine-skeptical crowd said they likely would not return.

Two-thirds of consumers said they were willing to wear masks again if restaurants began to require it, but they’re not as open to showing proof of vaccination.

If a restaurant you regularly visit required guests to wear a mask to dine-in, what would you do?

Comply a wear a mask

The bottom line: There’s a much higher risk of losing customers over requiring proof of vaccination to dine-in than asking for masks, according to Datassential. At least at this stage. And, naturally, it’s going to vary widely by market.

If a restaurant you regularly visit required guests to show proof of vaccination to dine in, what would you do?

Comply and show proof of vaccination

The fear of the Delta variant is playing a role in consumer confidence, too. The number of consumers very concerned about COVID climbed up 6 percent in July compared to June, per Datassential.

Also, 35 percent of respondents said they avoided eating out at restaurants in July—a 10 percent jump since June and a 15 percent leap since March of last year.

A full 84 percent concerned about the Delta variant said they would continue to cook more meals at home to stay safe, and 60 percent would tap delivery instead of dine-in.

Lisa W. Miller & Associates, which has conducted consumer surveys throughout the pandemic, found in a recent data run that anxiety is climbing again among diners. Miller segments her groups into five buckets: First out the door; out there, taking it slow; wait and see; anxious; and very anxious.

The recovery up until March was fueled more by those ready to venture out. But the line going down of late “is like the pressure cooker releasing the steam,” Miller said. The “very anxious” group were on the sidelines, seeing a relatively flat line, until March.

Recently, however, the “first out the door” group retrenched and pulled back on restaurant visits. Miller believes this is driven by frustrations with poor experiences/not being worth it more so than safety concerns. 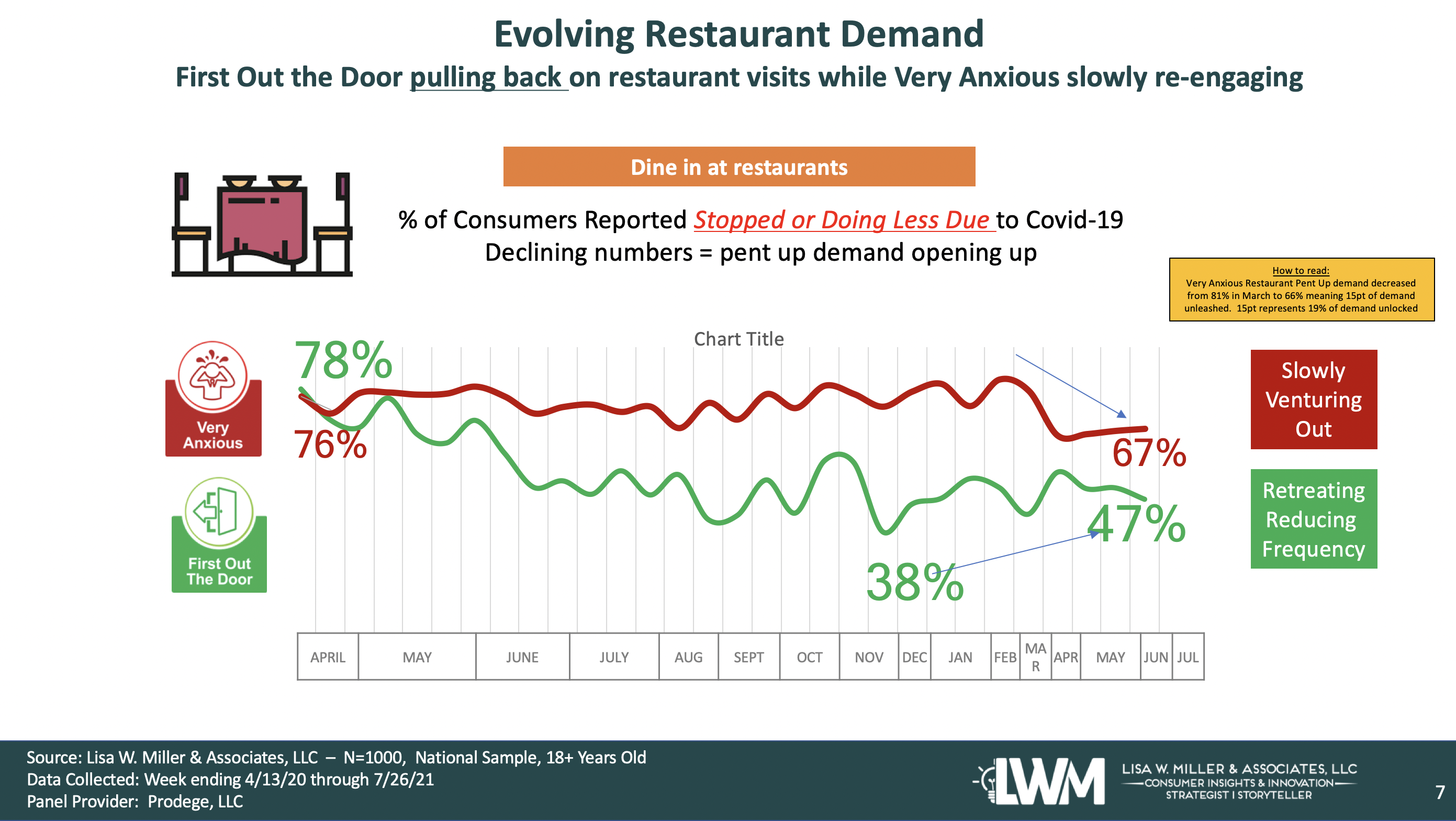 Q2 sales growth was fueled by re-entry from the “very anxious,” as well as the “wait and see,” and “anxious.”

“It's important for operators to know that these groups will be much more watchful of safety protocols, and are quick to pull back if they don't feel safe,” Miller says.

This matters on multiple levels. One being safety protocols are more important today versus a year ago as the composition of consumers returning to restaurants has shifted.

And customers are noticing the effect of the labor shortage, with 43 percent of respondents expressing frustration with lack of staffing in July versus 21 percent in February.

Larry Lynch, the National Restaurant Association’s SVP of science and industry, said in a statement operators are going to struggle meeting demands like those put forth by NYC. Checking somebody’s vaccine status isn’t like requesting ID when they ask for a cocktail, he said.

“Now, without training, our staff members are expected to check the vaccine status of every customer wanting to eat inside the establishment,” he said. “Last year when mask mandates across the country were put in place, restaurant workers suffered terrifying backlash when enforcing those rules.”

The Association’s ServeSafe platform even created a Conflict Descalation training module in 2020 to help restaurants handle angry retorts over masks. It won’t get easier with vaccinations.

“While having to require this requirement is far from ideal, now we need government to support restaurants, bars and workers with clear and fair guidelines, and an extensive outreach and education program, while also implementing more policies to support the industry’s recovery,” NYC Hospitality Alliance Executive Director Andrew Rigie said in a statement.

He added the mandated vaccine requirement would pose “economic and operational challenges” for restaurants, especially those in communities with lower vaccination rates and hesitancy. However, it could alleviate some anxiety over whether or not to follow the lead of people like Meyer. The burden of trying to implement a vaccine policy voluntarily, in other terms.

Which goes back to Rigie’s hope that NYC officials offer clear guidance for customers and operators to follow.

“Mandating vaccine requirements for restaurant and bar employees and customers to work and dine indoors is a very difficult step, but ultimately may prove an essential move to protecting public health and ensuring that New York City does not revert to restrictions and shut down orders that would again absolutely devastate small businesses that have not yet recovered from the pandemic,” he said.