Being prepared for unexpected events is key to making sure the supply chain keeps moving.

In late August, Hurricane Irene was churning in the Atlantic Ocean. Having already pummeled Puerto Rico, the powerful storm turned toward the U.S. East Coast, threatening much of the Mid-Atlantic region and keeping meteorologists guessing as to where exactly it might make landfall.

But Irene scared more than just weathermen and beach vacationers; quick-serve executives were also keeping a close eye on the storm’s path to gauge which of their stores could be impacted, and how much of a disruption it would create in their supply chains.

Irene and other hurricanes are just one potential supply chain nightmare operators face in their day-to-day business. From heat waves to deep freezes, from flash flooding to paralyzing blizzards, disaster can strike a quick-serve system any day of the year, forcing companies to aim for the best while planning for the worst.

The Show Must Go On

By now, we all know how Irene turned out; much as many feared, the storm caused billions in damage and stalled business up and down the East Coast.

The threat Irene hung over much of the U.S. for a week in August, and the clean-up it forced afterward, was a wake-up call for a number of fast food operators. Whether it’s a hurricane, a powerful tornado, or a dangerous ice storm, extreme weather can force unprepared quick-serve systems to come screeching to a halt.

The week of the August storm, Alice LeBlanc, chief global supply chain officer for Popeyes Louisiana Kitchen, and her team met to discuss the company’s preparation plans. “We had a meeting this morning to talk about the impact it will have on the region and the distributor in the region,” says LeBlanc.

“We want to make sure there are no suppliers that could potentially be impacted, but we’re also tracking that, although we think it’s going to hit the Carolinas, we might have impacts as it flows further to the Northeast in terms of rain storms.”

LeBlanc oversees a supply chain that gets food to about 1,600 stores across the U.S. For her team, failing the customers who walk into a store expecting its signature chicken or biscuits is not an option, no matter what the store has been through.

“We have a core number of products that we look at that we must have as a minimum to keep our restaurants open,” LeBlanc says.

“So let’s say the hurricane hits 10 or 15 of our stores; somehow, someway, we have got to make sure that those stores, if they are not impacted and damaged, have at least those core products.”

John Macksood is executive vice president of supply chain for Domino’s Pizza, a 5,000-plus-unit system that stretches to each corner of the country. Macksood says his team at Domino’s tries to approach an event like a natural disaster from “different angles” that are not affected by the storm.

“We will cover stores’ distribution from different centers that aren’t the normal center, just to get the outlying areas [affected by the weather event],” he says.

“There’s a lot of work that goes in there to track storms and other things. That and the snowstorms of last year in New York City and Boston and other markets, they wreak a little bit of havoc, but it’s our job that we make sure there is food in the stores.”

Of course, neither Macksood and his team at Domino’s nor LeBlanc at Popeyes are hopping into a big rig and hauling supplies to their stores themselves. Their relationship with their distributors, they say, is critical to coming up with a contingency plan should something unexpected happen.

LeBlanc says she works with all of Popeyes’ suppliers and distributors annually to make sure they have back-up plans in place for unexpected events. The most important tool she employs, however, is having additional suppliers in different geographic locations prepared to get key ingredients to the units.

“If we have a supplier in the Carolinas and that supplier is down [because of a hurricane], we have contingency plans in place where either we would have alternate suppliers or alternate locations of production that we could very quickly replenish the system,” LeBlanc says.

Misty Brooks-Vidal, director of purchasing for Krystal, also establishes firm plans with her distributors to make sure the flow of supply does not stop. She says it’s the distributors’ expertise through past events that helps Krystal stay prepared.

When she hears of possible supply chain disruptions, Brooks-Vidal’s first call is to her supplier, US Foods.

“They’ve done it before, they know what the procedure is; I rely on them heavily because they’re the link in the chain that gets the food to the restaurant,” Brooks-Vidal says. 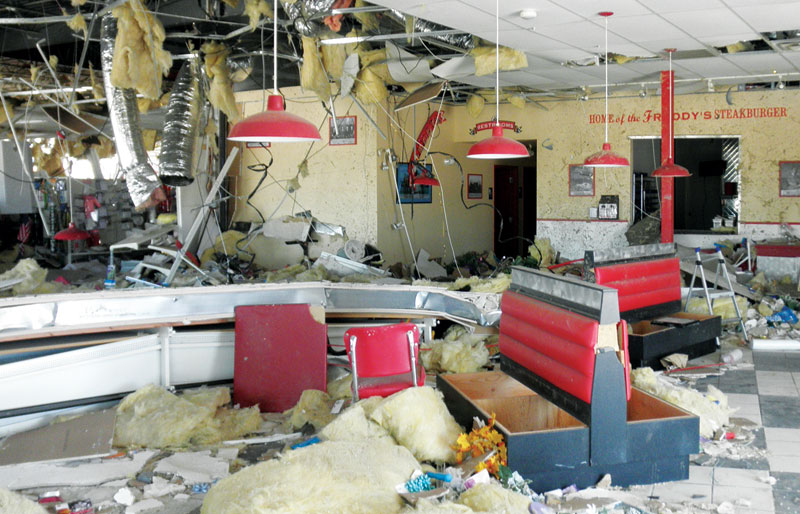 The Freddy’s Frozen Custard & Steakburgers in Joplin, Missouri, suffered huge damages and interrupted business when a tornado ripped through the town in May.

Brooks-Vidal says it’s especially critical in the Krystal system that there are back-up suppliers in place, because its signature slider patties can’t be made everywhere.

“[Our distributor] communicates with different division houses in different locations on our behalf,” she says. “For instance, if our Florida division is at risk, then our Montgomery division is going to be there for support, and vice versa.”

Beyond wanting to keep restaurants well stocked to maintain profitability, Brooks-Vidal says, Krystal also wants to ensure its food is ready for “humanitarian efforts.” With its units primarily scattered throughout the Southeast U.S., Krystal was significantly impacted by this year’s powerful tornado season and put itself in the position to feed affected citizens, Brooks-Vidal says.

Weather events are not the only unexpected obstacles that can disrupt a quick serve’s supply chain. In fact, David Rutkauskas, CEO and founder of Beautiful Brands International (bbi), has another, much more unpredictable, event that he fears.

“The thing that I worry about the most is homegrown terrorism,” Rutkauskas says. “If there’s an event like 9/11 again, everything will get all out of whack. Ten years ago, when that happened, the business world shut down for about six months. It affected everybody.”

Although an act of terrorism might be less likely to occur than a serious weather event, Rutkauskas says the BBI system, which is comprised of 13 quick-service and fast-casual brands, does have contingency plans in place for a worst-case scenario.

At BBI, Rutkauskas says the most important tool to keeping franchisees and system operators prepared for the worst is clear interoffice communication. The new, high-tech communication system in place at BBI keeps his employees apprised of the game plan in real time.

“It’s a portal where everything is put out there on a daily basis, and it’s an inner communication tool that everyone has access to from their Macs, from their iPads, from their iPhones,” he says.

“The fluidity of it really helps us manage any of these types of issues that might come up.”

The Tail That Wags the Dog

While weather events and other natural disasters can prevent a quick serve from delivering product to its stores, prolonged seasonal patterns or disasters can affect what food can be delivered in the first place.

The extended oil leak in the Gulf of Mexico in April 2010, for example, caused long-term damage to that region’s seafood supply. And the worst deep freeze in 60 years ruined many crops in the Southwest U.S. earlier this year, affecting ingredients such as peppers and tomatoes.

A severe drought and historically high temperatures in the Midwest this summer, meanwhile, caused the price of corn—the “tail that wagged the dog” in the U.S.’s food supply, says consultant Bob Bresnahan—to jump.

The drought forced the U.S. Department of Agriculture, in its “World Agriculture Supply and Demand Estimates” report, to reduce its prediction of corn harvested in the fall.

In the same report, the USDA predicted corn prices to rise 70 cents per bushel; the season-average farm price was listed at $6.20–$7.20 per bushel.

Bresnahan, CEO of agriculture consulting firm Trilateral, says higher corn prices lead to higher retail food prices across the board. Not only is corn used in several popular quick-serve menu items, but its use as feed for cattle also causes other grains to become more expensive, not to mention the meat itself, he says.

“If there’s not a lot of corn, or corn is very expensive, people will feed wheat,” Bresnahan says. “So if you’re a baker or a restaurateur … for the wheat they need to make the buns or the cookies or the tortillas, all of a sudden they’re fighting for food with the cattle feeders.”

The ever-fluctuating price of commodities and other ingredients, and the events that cause them to jump unexpectedly, is something the experts say operators must always keep an eye on. After all, the quick-serve system is very reliant on affordable food.

Macksood says Domino’s, which owns its supply chain and has 16 supply centers getting food to its stores, maintains good relationships with suppliers to be able to negotiate agreeable prices.

“We have put a lot more attention and resources on commodities,” Macksood says.

“We’re doing probably three, four, or five conference calls a week on commodities and different ones and tracking different reports to really get the best sense of where the markets are going, or for future buys and supply and understanding.”

Much like with isolated weather events that affect distribution to stores, experts suggest that having an alternative supply is the best option to avoid being at the mercy of high commodity prices caused by an unruly season.

Eric Grundmeier, executive vice president of supply chain for Qdoba, says he also keeps up relationships with suppliers so they can help look for alternative food sources, if necessary.

“If that’s altering your specifications on something like a tomato, which we’re in a position of doing if we need to here at Qdoba, you can source from other regions of the country,” he says.

Grundmeier says Qdoba usually uses red round tomatoes for its signature pico de gallo. However, should those tomatoes ever be affected by a drought or other seasonal disaster, the company can use roma tomatoes, “based on the quality, based on the availability, and based on price.”

“Having those things approved through the entire process—operations has approved them, R&D, quality assurance, food safety, all of the aspects of the supply chain all the way through to the restaurant—is important,” he says.

Ensuring the security of a supply is especially critical for those quick serves touting fresh or local ingredients, considering geographic differences in weather and the expectation from customers for them to deliver on their promises.

Early this year, Domino’s featured advertisements boasting its cheese from Wisconsin. Macksood says a specific, local-leaning campaign like that can only be done if the supply is already assured.

“If we’re launching into a promotion such as that, before we get into it we make sure we’ve secured supply for that entire promotion and that it’s available,” he says. “If there’s something that came up that was more dependent on local crops, we would make sure we have contingency plans for those.”

Regardless of the ingredients a quick serve uses and of the type of disasters that throw supplies into limbo, BBI’s Rutkauskas says the most important thing an operator can do is stay one step ahead.

How Subscription Services are Helping Revive Restaurants
Sweetgreen the Latest to Add a Drive-Thru Prototype
Restaurant Outlook for 2021: Uneven Recovery, but Better Days Ahead

Moving Beyond COVID: 3 Ways to Accelerate Innovation
How to Become a Top 10 Global Brand
The Secrets to Wingstop’s Tech Mastery

Shake Shack is Sprinting to Digital Supremacy
Why The Hummus & Pita Co. is One to Watch
Why Capriotti’s Wing Zone Blockbuster Will Boost Both Brands

Back to Normal in 2021? Not So Fast!
What’s in the $900 Billion Stimulus for Restaurants?
How to Best Avoid Restaurant Insurance Pitfalls