Can Mobile Apps Bring Customers Back to Restaurants?

Connection remains key during COVID-19, and it's changing every second.

A couple of years ago, App Annie conducted a study that suggested a shift in mobile behavior. Remember those days when everybody got a smart phone and downloaded 100 different icons? Those practices evaporated. For starters, most of us have now had a smart phone for years. But App Annie also discovered 30 percent higher engagement in non-gaming apps for Gen Z versus older demographics.

What that hinted is the purpose of apps was changing. Instead of entertainment, they started to play an active role in consumers’ daily lives. In other terms, not so much a means to kill time, but a critical part of the mobile checkout journey to purchase.

Given consumers spent $101 billion on apps in 2018 and there were 194 billion downloads, this offered good news for restaurants. Unlike other industries, notably retail, restaurants slide neatly into that “daily life” designation. People need to eat. Typically, multiple times a day. And users, especially younger ones, appreciate a frictionless experience they’re comfortable with and can keep coming back to. It’s one reason third-party delivery apps hold so much share. Years of hyper marketing and incentives ingrained the ordering process into habit for people. And so they fire up aggregators as product loyal consumers instead of brand loyal ones. Want a burger? Turn to DoorDash, Uber Eats, etc.

Take a look at how marketing is changing: While advertising on the food delivery category is down 5 percent from 2019, certain brands, including DoorDash, GrubHub, and Shipt, stepped up considerably during COVID-19 so far, Kantar reported.

According to an analysis of the category, ad spending from February 2 through April 11 totaled $269 million, down 5 percent compared to the equivalent 10-week period in 2019. Domino’s, the top spender, boosted its ad spend during this window by a modest 9.7 percent to $80.1 million. However, other top players increased their year-over-year spend by double digits, including Papa John’s, which saw a 48.3 percent increase, GrubHub (31.8 percent), DoorDash (60.2 percent), Shipt (68.9 percent) and Papa Murphy’s (57.1 percent).

And as Market Force Information noted from a pool of 4,000 consumers, 80 percent of people are turning to brands they trust during the pandemic when they’re making restaurant purchases. The decision-making process has narrowed.

Of those surveyed, close to 90 percent said they’ve visited a drive thru within the last two weeks; 47 percent choose carryout. Delivery? Just 27 percent.

The point being that now might be an ideal time for restaurants to begin leveraging that trust. Whether or not some of the more recent negatively tied to third-party delivery is hitting home with consumers is hard to say. It's hitting their wallets as much as 91 percent higher, according to The New York Times. But there’s no question people want to lean on go-to restaurants for support, and rely on familiar sources to ease their fears.

This is where the app conversation can return to the forefront.

Location technology company Bluedot Thursday released a study called “The State of What Feeds Us,” which looked into how the current health crisis has impacted consumer behavior around the use of mobile apps to purchase food and essentials. It polled 1,366 people between April 3–4.

The main takeaway: American consumers are increasingly downloading mobile apps to purchase from restaurants and stores for pickup via the drive thru and curbside. They want to support restaurants, but on their own contactless terms.

“In order to preserve their most reliable revenue source, brands are moving quickly to figure out how to adapt their mobile strategy, along with their drive-thru and pickup operations, to meet growing demand for contactless pickup,” Emil Davityan, Bluedot CEO and co-founder, said in a statement. “Consumer behavior and expectations are being dramatically reshaped by this pandemic which will impact how the customer experience will evolve, not just in the coming weeks but also longer term after the country reopens.” 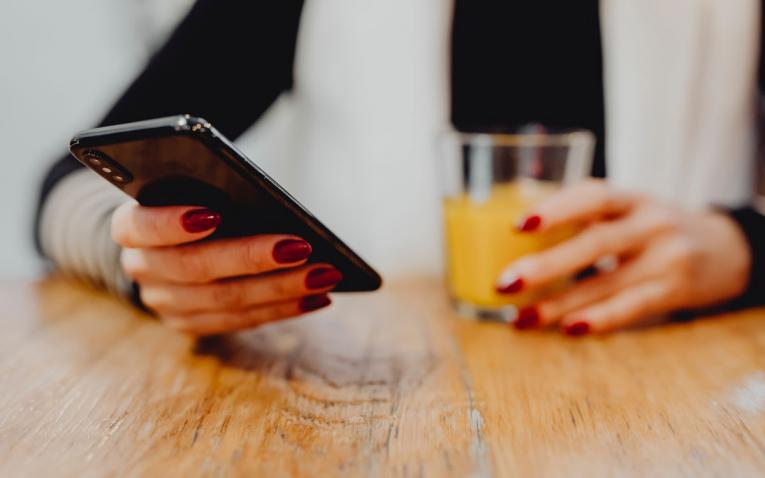 Consumers tend to be more product loyal than app loyal. But behavior is shifting a bit during COVID-19, with people putting their trust in brands they love.

Amid COVID-19, Bluedot found a vast majority of respondents—77 percent—are ordering food, groceries, and other items via apps. Fifty-one percent said they’ve downloaded at least one new app to purchase food and essentials (fast food and big-box store apps were the most downloaded).

Consumers noted they want to stay in their cars for food and essentials. This was ranked as the No. 1 consideration for curbside pickup and takeout.

A focus on fast food

Bluedot’s respondents showed a strong surge and continued interest in fast food and fast casual spots. A full 88 percent of respondents said they believe a drive thru with four cars or more is considered a long line.

Three out of four people noted they would visit the drive thru during the pandemic, with 46 percent planning to go as much or more than before. Close to a third (30 percent) said they’ve visited the drive thru more often or much more often in the last month.

And nearly a quarter of Gen Z respondents trust drive thru the most amid health and safety concerns related to COVID-19.

Also, nearly 20 percent of Gen Z respondents said they plan on visiting drive thrus more often due to COVID-19, with another 35 percent planning to visit as usual.

So how can restaurants capitalize or improve this experience? Nearly 40 percent said they want less contact/zero contact options in the drive thru. Sanitation and safety info followed.

There’s been a lot of talk recently surrounding in-store precautions, like front-counter shields and dividers. But one of the biggest pain points for guests today actually stems from the point of purchase. This is true of the drive thru as well.

KFC is using drive-thru extender payment pads to further limit contact between consumers and employees. As much as guests don’t want to hand over cards/cash to restaurant workers, the same is true of employees dealing with multiple consumers throughout a day.

This is yet another reason apps can prove a valuable ally for restaurants. The ability to order ahead and pay/leave a tip is a deal breaker for many. Yet, despite how far this rises in the coming days, there will always been a group of people, especially older guests, who pay via traditional methods. So finding ways to ease contact there, like what KFC is doing, could be a smart unlock.

Turning to fast casual, Bluedot’s study showed nearly 50 percent of Gen Z customers were willing to try out a new restaurant if curbside was an option. If that’s true, you have to assume a similarly high figure would write off restaurants if it wasn’t.

Twenty percent of mobile app users said they are downloading more fast-casual apps during COVID-19 compared to other types.

When asked what apps they’ve ordered from in the last six months:

While some of this stems from the fact there are a lot more curbside options than there used to be (full service is a good example) it still shows strong demand for an option that could linger well past the crisis. Here’s an article on 10 reasons why curbside pickup could be the next big thing.

Despite curbside and pickup polling as popular options, respondents lamented a lack of time slots for groceries, pharmacies, and large retail stores. Close to 70 percent (67) of millennials said they’ve used or want to use curbside pickup. Having open slots and offering a positive experience is one way restaurants can steal some share back from grocers. If people can’t get their food, and don’t want to brave the in-store experience, they might just pull up the restaurant app they have downloaded previously. Or decide to download a new one. For operators, having resources and systems at the ready is where the battle begins.

How respondents are currently using curbside:

The last point is something that appears to be transforming during COVID-19. Even the oldest and sturdiest of habits are being loosened by safety concerns.

Bluedot found 53 percent of consumers are downloading and using more apps with the goal of reducing interaction/contact with on-site staff.

Three out of four consumers said they were more concerned or very concerned about grocers, restaurants, and stores taking the appropriate precautions during the crisis. Baby Boomers—a generally more at-risk population—were more concerned than others.

North of 40 percent of millennials cited saving time once at the restaurant or store as a key motivator for using mobile apps. Convenience pre-COVD-19 was one thing. It’s something altogether different now. Nobody likes waiting around. Not because they’re in a rush or don’t have a long attention span (like before), but because there’s a sense of urgency with personal safety. Being out in public makes people nervous. This is especially true if they have to get out of the car.

When it comes to in-store pickup and carryout, Bluedot said, there are no clear winners on what is perceived as safest.

However, to the aforementioned concern, no lines is a vital point. So is seeing staff wipe down equipment, wearing protective gear, and minimal contact overall.

Amid health and safety concerns with COVID-19, Boomers trust in-store shopping the most, yet worry about staff taking precautions. Eighty percent said they were more concerned or very concerned about what staff were doing to prevent the spread of coronavirus.

Like always, attracting Gen Z and millennials is proving to be the key for quick-service, delivery, and grocery apps.

More than 60 percent of this generation set said they were downloading and using more apps because of ease of ordering.

In the last six months:

During this crisis period, Gen Z customers have downloaded three times more fast-food apps than grocery apps. While that might boil down to options, it’s still a very promising nugget to lean into. Younger consumers are seeking bridges to quick-service options.