Will it deter guests? Make them feel safer? Unsurprisingly, nobody knows just yet.

U.S. Census data shared Thursday showed little change with restaurant sales from July to August, which, given recent uncertainty in the market, might have surprised some. Restaurant figures were flat last month, as “food services and drinking places” collected a touch under $72 billion. It was 32 percent higher than the year-ago measure and 10 percent or so above 2019 levels. More notable, though, sales were $71.9 billion in July and $71 billion in June. So the industry’s overall recovery is plateauing a bit, likely due to challenges surfaced by the Delta variant’s surge. But it’s not reversing, either.

The sales growth was the lowest recorded since a 5.8 percent result in May, and traffic the softest in three months.

Yet, in the week that ended September 5, restaurants posted their best seven-day period since the third week of July, per Black Box. The best performing regions were Florida, the Western part of America, the Southeast, and California. The weakest were the Southwest, New York–New Jersey, New England, and Mountain Plains.

As always in this COVID story, the financial picture is a diverse and ever-evolving one. The index for food away from home rose 4.7 percent year-over-year in August and 0.4 percent versus July, according to the U.S. Bureau of Labor Statistics. Menu prices at quick-service establishments hiked 6.9 percent compared to last year, while full-service meals lifted 4.9 percent.

Customers are spending more as restaurants attempt to offset inflation and, so far, it’s working in operators’ favor.

But a lot of what’s happening is unfolding market-to-market, not on a broad scale. Just as has been the case ever since states started to reopen at different paces. More than a third of states currently have dining restrictions still in place.

As the economy reopened, Black Box data showed, full-service restaurants made progress winning back consumers but still trail pre-pandemic marks by 1.5–2 percentage points, which is modestly higher than the prior month, credited to a Delta-driven pullback.

From a research perspective, this gave Lisa Miller a chance to gaze into a crystal ball—a test market to listen and learn and try to understand how customers might react if the practice becomes more widespread. Given President Joe Biden’s recent vaccination mandates, it’s more likely than not other cities will follow suit in coming months.

Miller has conducted reports throughout COVID with her Lisa W. Miller & Associates, LLC consumer insights and innovation company. Her most recent addressed the vaccination requirement impact on restaurants. It surveyed consumers in the aforementioned markets post mandate.

To frame the magnitude, here’s a comparison point: When it comes to employees wearing masks, Miller found a net favorable impact for restaurant visits.

However, asking customers for a negative COVID test or proof of vaccination is a different story.

Percentage stopped going out to eat until the mandate is lifted

Miller shared these insights with business leaders to see if they aligned with reality. Surprisingly, or not, there were polarizing interpretations of the same facts, Miller says.

Depending on the filter, business owners saw and interpreted data differently. On the positive spectrum, the proof of vaccination net impact to restaurants was positive in NYC, San Francisco, Denver, and New Orleans. Same with masks (7 and 6 percent), “showing an opportunity for the industry to create a higher social good with a vaccine mandate,” Miller says.

But from the negative angle, there were twice as many people completely opting out of dining in-store due to the vaccine proof mandate (15 percent) versus masks (7 percent). “The 8 percent gap was alarming to some, but not all,” Miller said. 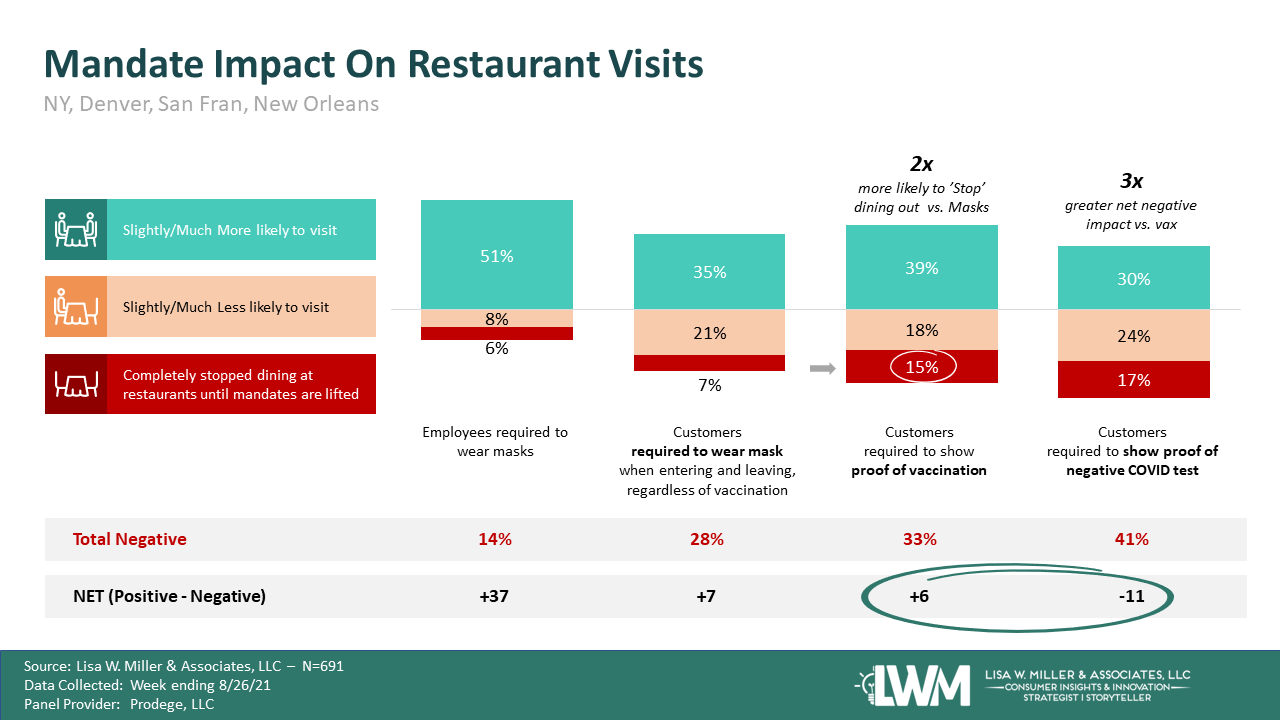 What to make of this

“There are two confounding forces colliding,” Miller said. One on hand, there are clearly customers who believe vaccinations are the right thing, yet also view requiring proof as a step too far. Meanwhile, while requiring proof of vaccination is supposed to make guests feel safer, it appears to be creating more anxiety to not go out at all, Miller said.

Not to mention, the potential added anxiety of losing the card.

Not unlike the overall recovery, vaccine sentiment depends on where you live. This should come as no real stunner. The pandemic response and message has been, if nothing else, inconsistent.

Percentage stopped going out to eat until the mandate is lifted

“The question for businesses, how, if at all, will the vaccine mandate consumer tension subside over time? Time will tell, and it may be a while,” Miller said. 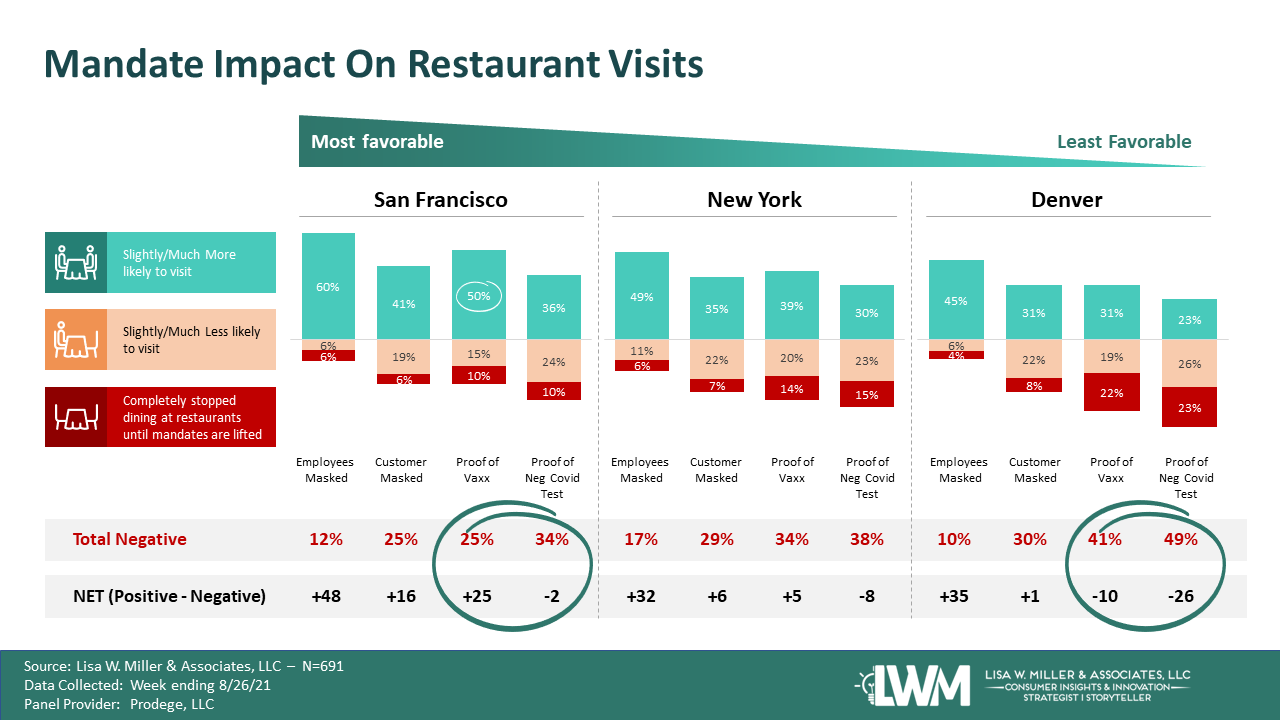 Buckle up, she adds. These markets are going to have a bumpy ride ahead given the fact we’ve never been here before. “For the rest of the country, keenly watch and take notes as other cities and municipalities consider adding the mandates,” Miller said.

And as stressed in past stories, if former mask mandates are any indication, the process is going to be challenging for restaurants. To put it lightly.

An NBC News story on Friday said three people were arrested for allegedly assaulting a NYC restaurant hostess after she asked a group of diners visiting from Texas to show proof of vaccination. Cellphone video from NBC New York showed a brawl outside Carmine's Italian restaurant. In a statement to the outlet, Carmine’s said it was a “shocking and tragic situation when one of our valued employees is assaulted for doing their job—as required by city policies—and trying to make a living."

Executional clarity. The mandate is clear, but how to execute day to day is not. Consumers are told that their cards are irreplaceable so they are concerned with carrying them around. Make the requirements clear—what they are and how to meet them. Post signage with QRCodes, on website and Facebook to take some pressure off your staff. Train your team on protocols of what's acceptable or not and be consistent.

Communication hierarchies matter. As Delta concerns increase and mandates are added, there may be a tendency to want to go back to more safety messaging. Pause. Know your target, get really good at knowing who they are, but the likely answer is don't do lead with safety. Lead with joy, reassure with safety. Yes, bring back those safety messages, but as reassurance, not the main message. That will likely turn off your leading segments and make the anxious segments more anxious.

Be prepared and patient. For those that run restaurants in the four "test markets" we appreciate your "participation" in this research as the industry will undoubtedly learn a lot. We don't need data to tell us this topic polarizes, you live it.  You can help the rest of the industry be better prepared going forward.