Have Restaurant Sales Bottomed Out?

There some signs, but there remains a long way to go.

Sifting through all the COVID-19 data can feel like walking into a hoarder’s house. There’s a lot to take in, yet impossible to find what you’re looking for.

Yet it remains an important element in this recovery battle.

Industry management platform Restaurant365, which has a customer base of 10,000-plus restaurants across 50 states with nearly 100 point-of-sale vendors represented, recently pulled data from independents to fine dining to franchisees, franchisors, large chains, and everything in between. Check out the weekly dashboard here.

Here’s a look at what the numbers, which are updating weekly, tell us so far.

As expected, the decline in restaurant sales from the week ending March 8 was rather steep. The total decline from that point to March 29 was 78.3 percent. It got worse week-to-week as closures picked up. 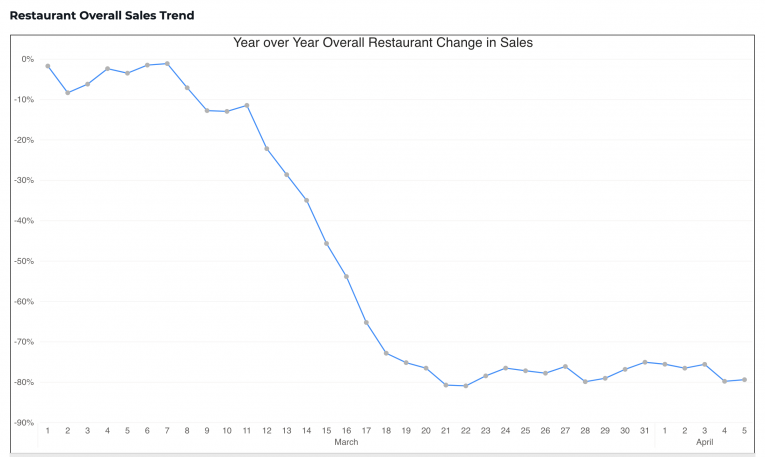 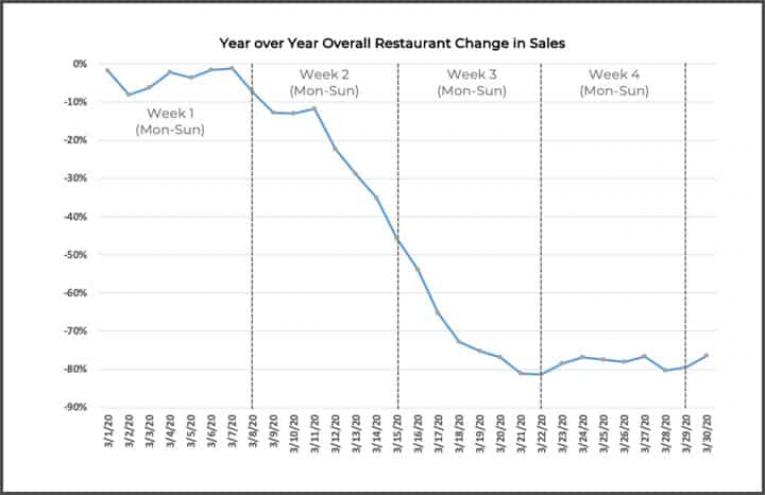 A rapid change, to say the least.

It fits that the week ending March 22 would showcase the largest spike. That’s the period when many counties and states put stay-at-home guidelines into place. It’s also worth remembering, Restuarant365 said, the data includes restaurants that closed, which makes the decline harsher.

March 11 really marked the point when sales tumbled. The company’s data showed sales the week ending March 8 were already down 5–10 percent from the previous year, However, March 11 proved the tipping point.

To put that in perspective, here’s a look at a typical week, in terms of restaurant sales.

On March 11, sales rose from Monday/Tuesday as expected. But March 12 (Thursday) did not see its typical bump. And while March 13 and March 14 got a little lift, it wasn’t nearly to the extent as usual.

Looking back, it’s easy to explain the dynamic. March 11 was when the news cycle leapt off a COVID-19 cliff. The WHO declared the coronavirus outbreak could be called a “pandemic.” President Trump announced restrictions on many foreign travelers. The Dow Jones Industrial Average officially entered a bear market. Actor Tom Hanks and his wife, Rita, announced they tested positive for coronavirus. Lastly, the NBA postponed its season, which many people point to as the large-scale event that truly set off the country’s market-by-market business shutdowns. 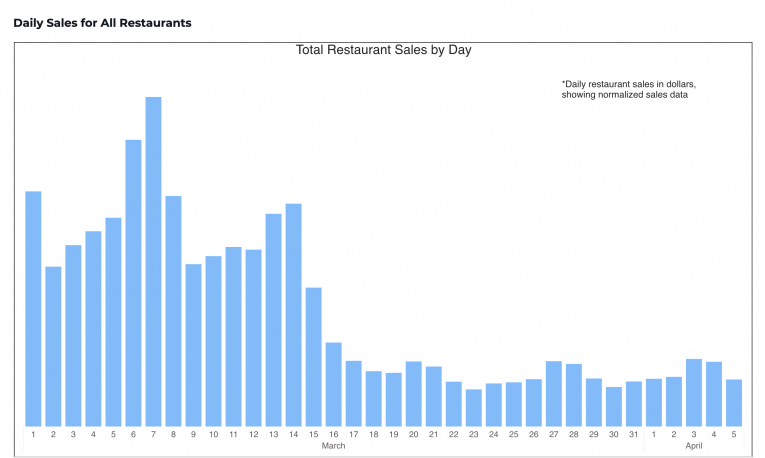 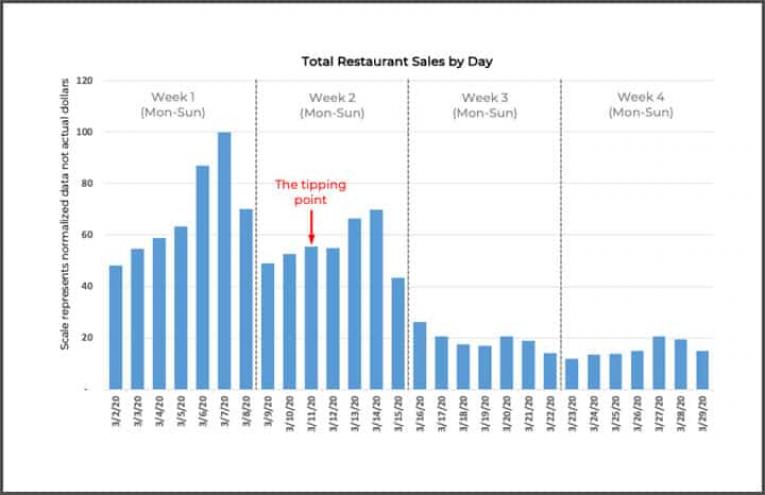 Business as usual is gone for now.

Restaurant365’s data showed a steady increase in restaurant closures, especially during the week of March 22. It flatted out to about 45 percent for the week ending March 29.

In terms of the concepts staying open, Restaurant365 found restaurants pivoting to delivery and takeout bottomed out with a 68 percent decrease in year-over-year sales on March 22. In comparison, the decrease is better than the overall 80 percent sales decline the industry witnessed. Here’s a look at some key practices to make the change. 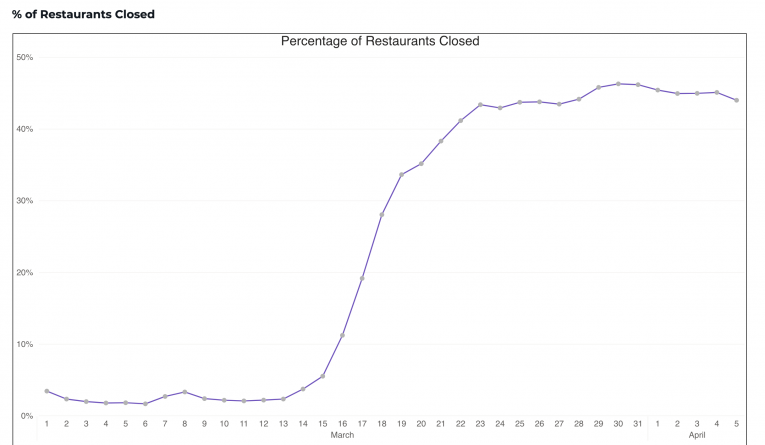 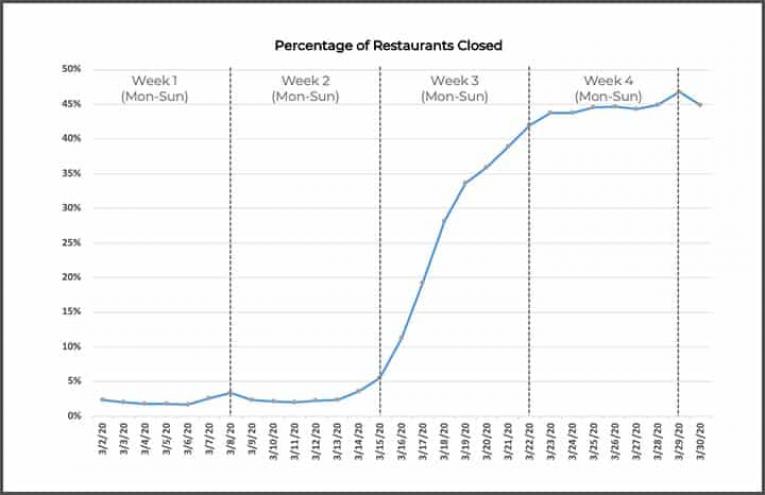 In the week ending March 29, year-over-year sales for open restaurants fell roughly 60 percent. The increase of 8 percentage points, though, could indicate sales have stabilized, Restaurant365 said.

To put it a different way, restaurants and customers have settled into the delivery/takeout reality to a certain degree. The awareness gap isn’t as wide as it was at the outset. But that doesn’t mean this signals a stable environment where restaurants are successfully living that dynamic, broadly speaking. It might just be a way to illustrate “a new normal” for restaurants during COVID-19.

"The best explanation is likely that both restaurants and their customers have hit their delivery and takeout groove," says Tony Smith, Restaurant365's CEO. "Restaurants have ramped up their promotions and figured out their logistics. Customers meanwhile, have likely established a routine that incorporates takeout and delivery." 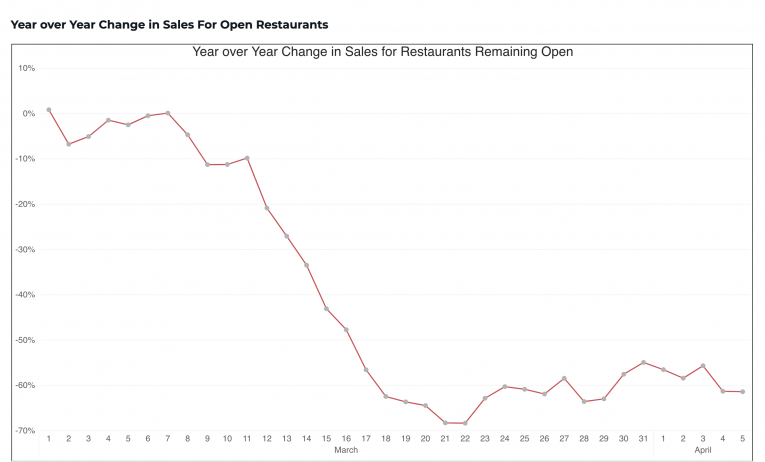 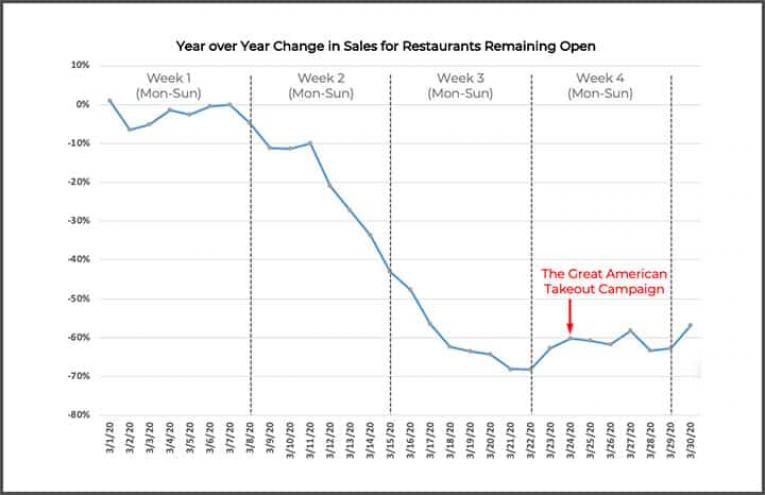 "The first insight is that weekends are, in particular, worse in than normal," Smith says ."The graph shows the year-over-year decrease in sales for restaurants that remain open. ... weekends are performing especially poorly compared to last year’s weekends in March. This is likely due to the fact that weekends typically have more dine-in business and more alcohol sales and that is hit hardest in a takeout and delivery environment."

Restaurant365 said that, similar to a failing stock market, there’s always heightened interest in understanding when a bottom is hit and, even more importantly, when an uptrend begins.

So have restaurant sales bottomed? There are some promising signs, the company said.

As the most recent chart showed, you could make the case in the latest week of data things have gone from bad to not as bad. Call it a moral victory for now.

Restaurant365 pointed out that week coincided with the launch of #TheGreatAmericanTakeout, which is repeating weekly. The number from the week ending April 5 will help confirm a bottom and if a rebound (of sorts) is taking place.