Welcome to a new age in guest behavior.

Consumer Trends | February 16, 2021 | Danny Klein
The Habit
From curbside to drive thru, mobile is the great connector.

Talk of the “new normal” is ready to evolve. Restaurants have come far enough to view life after COVID-19 not as some post-apocalyptic challenge, but rather as a refocused or reimagined version of why they were successful in the first place. Call it reset, not an extinction event.

Perhaps then, we toss aside “new normal,” in favor of a “new era of customer habits.” Although COVID-19 was undeniably the catalyst, consumers have signaled that behaviors picked up over the last year are here to stay. The question is, which ones are worth investing in?

Location technology company Bluedot has tracked behavior—and its impact on restaurants—throughout the pandemic. Its third “State of What Feeds Us” study focused on guest expectations versus reality when it comes to drive thru, curbside, wait times, mobile apps, and more.

One banner theme—Logistics is the new customer engagement.

Let’s start by examining some of the dining habits with staying power.

Restaurants talked often about accessibility before COVID. Opening channels to expand convenience. The need to put your brand in front of agile guests. And what better place than mobile? Pre-virus, the average adult spent about 3.5 hours a day using the Internet on their phones, according to a 2019 study from Zenith. This shot up during quarantine. One study found people start looking at screens within 20 minutes of waking up and a third switch on a device within 5 minutes.

Per App Annie, Americans averaged about four hours a day on their phone in 2020, up from three hours.

Exact figures aside, it’s clear mobile is an extension of nearly every consumer’s constant journey. It’s their portal to information, acquisition, and communication.

According to Bluedot, 85 percent of respondents said they plan to keep mobile apps for restaurants and food once the pandemic subsides. Why get rid of them? If the experience won them over during COVID, it will remain the best bridge to convenience available.

Eight out of 10 consumers said they expect to continue their current dining habits beyond coronavirus. Perhaps they add in others, but they won’t abandon COVID go-tos. 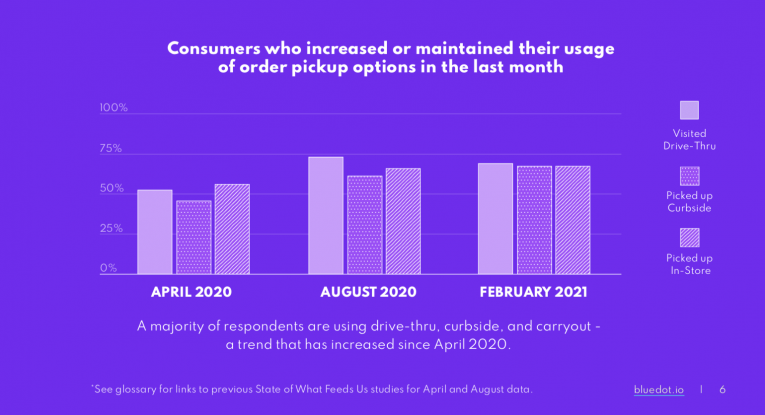 Only 23 percent of respondents said they’d return to pre-COVID dining habits altogether. One in three plan on fully adopting newly formed habits and never returning to pre-pandemic ways. Will there be some who don’t dine-in again? A hyper-opposite to the pent-up demand boiling of late? There’s a good chance there was a subset of consumers who never liked doing so in the first place. Maybe they were heavy drive-thru or counter-service users. Either way, the crowd-avoidant guest, as small as that category might or might not be, has never had more options. And even if that population diminishes over time, it’s safe to assume people will progress at different rates. Certain diners will lag others when the dine-in rush returns. Kind of like waiting for the holiday season’s hottest gift to lose buzz so you can check reviews, recalibrate, and pick it up after the dust clears.

Broadly, consumer fear and/or anxiety levels have fallen since the start of COVID.

In Bluedot’s study, curbside has actually now overtaken drive thru as the safest fast-food order option, as perceived by guests.

Diving further, not only are more consumers visiting the drive thru, they’re visiting more often than ever.

There’s been a 26 percent increase over the last 10 months, Bluedot found. A whopping 91 percent of respondents said they’d visited a drive thru in the last 30 days.

In April, more than 50 percent said they had not planned on using drive thru (or using less frequently). Fast forward to February, and only 9 percent have not visited in the last month. Adoption and acceptance is through the roof. Some credit goes to mobile and the integration of apps and other digital transactions into the experience. That and chains simply getting more efficient and guest-centric. McDonald’s, for instance, welcomed 300 million more cars in 2020 than the prior year. Of course, much of this is also tied to which restaurants are open and which are not, and which are clearly open and which take some discovery on the customer’s part.

Driving by a packed Chick-fil-A inspires a herd effect not as easily replicated in a restaurant that’s closed for dine-in yet remains open for off-premises. People go where they’re comfortable. And sometimes that stems from knowing what you know, and not worrying about what you don’t.

Regardless, the ability to impress new customers, reward loyal ones, and reengage lapsed users is a true chance for drive-thru focused brands today. 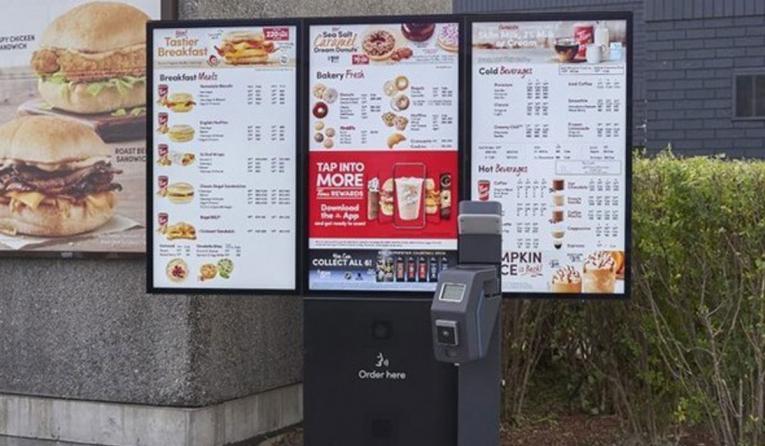 Contactless payment at the drive thru is a big push for Burger King and Tim Hortons.

Visited drive thru some or more often than before

Said CEO Jose Cil, “We believe strongly that it is time to modernize our drive-thru lanes throughout the U.S. and Canada to provide even better, quicker and contactless service for our guest.”

Guest experience: RBI’s initiative includes presenting menu options on digital screens tailored to each guest, as well as the integration of the company’s loyalty program at the moment of ordering.

Contactless: These remote payment devices should boost throughput and improve efficiency. But maybe more notably, if not equally, it’s simply what the guest is asking for.

Last August, sanitation ranked No. 1 for safety at drive thrus. The fact contactless surged ahead tells you all you need to know about where future innovation lies.

Returning to curbside, nearly 80 percent (77 percent) of consumers have utilized curbside pickup in the last month.

Pickup up fast-food curbside same or more often than before

What’s exciting and complicated about curbside, compared to drive thru, is the relative whitespace. Brands didn’t feature it all that often before COVID. And it’s far more capital friendly to stand up than drive thru. You don’t need to pick sites around it, or build physical infrastructure to support it.

This is both an alluring point and one that carries some customer risk, which is viable anytime you launch a service channel that wasn’t part of your brand’s promise before.

Fifty-five percent of consumers in Bluedot’s study expect to be automatically checked-in via the restaurant’s app, and for staff to be notified to bring items directly to their car. Yet only 25 percent of people said they’ve received this level of service.

There’s a lot of room for winners and losers to make their mark. We’ve crossed the novelty phase and are now firmly in the execution one. Since penetration of curbside is so widespread now, putting the guest first and removing friction will separate success stories from flame outs. Because, unlike in those early days of COVID, people can go elsewhere for the same convenience. In fact, they can go pretty much anywhere.

Thirty-three percent of consumers ranked not being acknowledged upon arrival as one of their top curbside turn-offs. What would make them feel safest? Not leaving their car was the No. 1 pick.

Sloppy precautions and processes at curbside continue to dampen experience, Bluedot said, with a 48 percent increase in respondents citing these as major concerns. And demand is sticky—54 percent said they like using curbside pickup because it’s safer than dining in the restaurant.

The biggest curbside friction area is “waiting.” In October, 44 percent of people said so. In February, it was up to 51 percent.

Nearly seven out of 10 people said they like curbside because it is fast and easy. So if the experience is neither of those, it’s not delivering on the curbside potential. 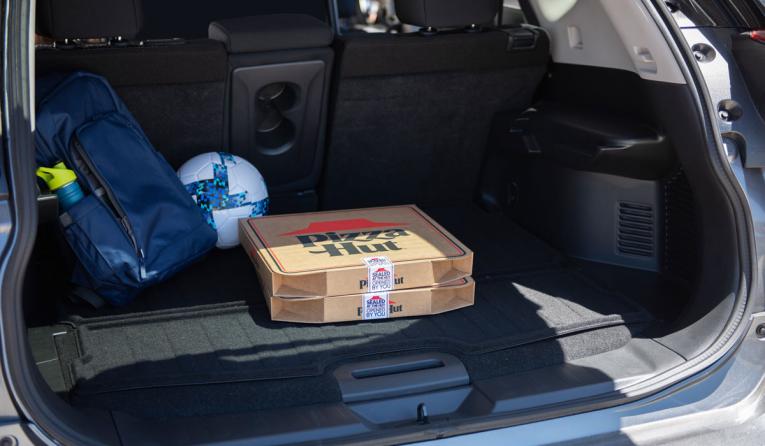 Curbside will have winners and losers after COVID-19. It does already.

Switching gears to takeout, 53 percent of respondents who were not ordering carryout before April said they are doing so today. And this is climbing, too. Eighty-nine percent of guests said they’ve used in-store pickup at fast-food restaurants in the last month.

Picked up in-store same or more often than before

Like drive thru and curbside, priorities shifted as frequency did. Consumers now list “decreased wait times,” as their top priority. In August, it was wiping down equipment in protective gear.

As you can see, consumers, as their anxiety over COVID dips a bit, are turning back to some of the age-old ticks. They’re seeking out convenience once again. Even more so.

This can’t be understated. Consumer expectations are shifting as speed of service becomes a deal breaker.

Nearly 80 percent of Bluedot’s respondents said they would leave or consider leaving when they saw a long line. This is a crystal change. More options for convenience in the marketplace, plus a different set of issues with lines. Not just time, but personal safety as well. People continue to fear strangers during COVID over anything else. More so than brands. More so than establishments.

And so, impatience is on the rise. An increasing number of guests want wait times under 6 minutes, Bluedot found.

These numbers are stark.

While not yet a majority (under 20 percent), the number of consumers expecting wait times under 4 minutes has skyrocketed compared to August. It’s up 47 percent at the drive thru, 101 percent at curbside, and 109 percent for in-store pickup.

Back to the mobile conversation, this is where the battleground will wage. Eighty-six percent of respondents said they’ve ordered directly from a restaurant app since COVID.

The number of new apps downloaded hiked compared to April. For consumers who have downloaded two to three new apps, it’s up 45 percent. For three to five, 134 percent; and five-plus, an eye-opening 265 percent.

Eighty-five percent of guests have at least one restaurant app on their phone.

One to two times a month

One to two times a week

Less than three times a week

And when deployed, restaurants appear to be winning the battle against aggregators. Seventy-nine percent of consumers said they order directly from restaurant apps more than once a month. Thirty-six percent said they never order from third-party apps.

Understanding the reasons why could provide a blueprint.

Thirty-six percent of consumers said they’ve specifically turned to mobile or online ordering due to their fear over walking into a store or restaurant. Once in, keeping them is the loyalty unlock on the table for operators.

“One of the big questions looming over restaurant brands during the course of the health crisis is whether the shift in consumer restaurant habits, including the growth of off-premises, will continue long term. It’s clear now from the data that while COVID-19 might have been the catalyst, the dramatic changes in consumer behavior are here to stay,” Emil Davityan, Bluedot co-founder and CEO, said. “Restaurant customers are choosing a multi-channel approach to order pickup including the drive-thru, curbside, carryout and delivery. This means the operational logistics can no longer be a one size fits all approach and brands must meet consumer demand with a personalized, flexible solution that adapts to individual preferences.”