Curfews and closures affected business in the early days.

While the news cycle lately has, understandably, pushed COVID-19 down the ladder a bit, the reality isn’t quite the same for restaurants. One crisis didn’t replace another; they compounded each other.

Early data indicates that businesses just starting to recover from the pandemic weathered another financial hit in cities where protesting is most prominent.

Many restaurants had to close to protect employees and wait out demonstrations. Others shortened hours due to curfews. Generally, fewer customers are going out to retail amid protests.

The Cheesecake factory said earlier in the week that it closed, or partially shuttered, 87 restaurants over the weekend for these reasons. And that, plus COVID-19 setbacks, drove down same-store sales 63 percent in Q2 to date through May 31 (Q1 ended March 31).

Inspire Brands CEO Paul Brown said in a June 2 letter that “this violence also impacted a number of our company and franchise-owned restaurants and was especially tough on our restaurant team members who were on the frontlines as the attacks were unfolding.”

The company, which runs Arby’s, Buffalo Wild Wings, Sonic Drive-In, Jimmy John’s, and fast casual Rusty Taco, closed “many” of its units in the middle of protests and sent employees home early as a precaution, Brown added. Nobody was injured.

And these financial concerns don’t address the restaurants that were burned, looted, or damaged significantly. Those stories will continue to emerge in coming days and weeks.

Womply, through daily analysis of credit and debit card transactions at 400,000 local businesses, took a look at recent results to measure the impact thus far.

In Minneapolis, after seeing a steady recovery at local restaurants, revenue last weekend plunged to below the average daily revenue experience since March 15. Similar trends emerged in LA and Philadelphia.

The chart below takes a day-by-day look: 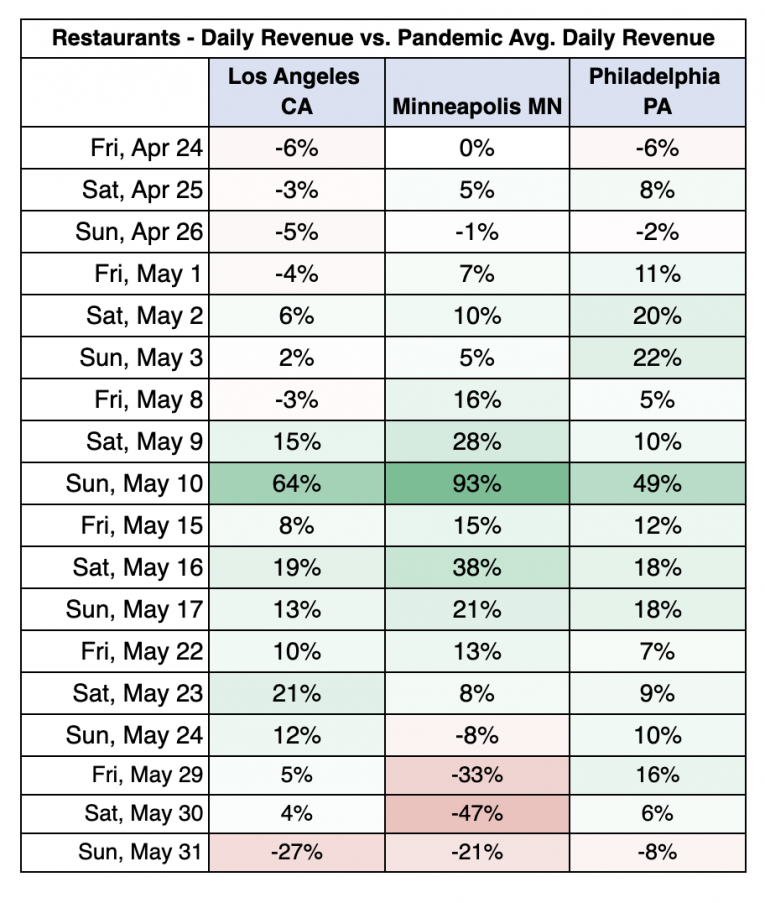 New CEO of David Chang’s Fuku Plots 2023 Brand Reset
Can the Labor Shortage Bring Out the Best in Restaurants?
Building Great Teams on a Foundation of Pride and Purpose

3 Ways Digital is Changing the Drive-Thru Experience
Do Fast-Food Restaurants Need Dine-in Space?
In Search of the Perfect Drive-Thru Restaurant