Brands No. 51-65 are fast-rising quick-service and fast-casual companies that just missed the QSR 50.

Auntie Anne’s hasn’t been shy about venturing abroad over the past year, breaking into new markets like Japan and Poland, where first-day sales exceeded expectations by 80 percent. Joining the ranks of Focus Brands late last year—alongside sister brands Cinnabon, Schlotzsky’s, Carvel Ice Cream, and Moe’s Southwest Grill—the pretzel pros boasted record sales of $394 million in 2010. Auntie Anne’s has 1,100 stores and a presence in 44 states and more than 20 countries.

Under new president and CEO Frank Paci, McAlister’s systemwide sales exceeded $357 million in 2010 and are projected to reach $385 million this year. Expansion is key for the company, which has plans to develop 80 stores in markets like Virginia, Oklahoma, and Iowa by the end of 2012, in addition to its 305 existing locations. Aiming to speed up service and enhance quality, the company has designed a new store prototype that will launch in Mississippi during Q3. Customers can also look forward to new menu additions, like artisan breads, Black Angus roast beef, and Black Forest ham. 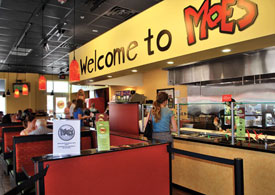 Starting the new year off with the introduction of its “Food Mission,” a new restaurant prototype, and expansion overseas, Moe’s Southwest Grill has had a lot on its plate over the last 12 months. Its more than 420 locations pulled in $347 million in U.S. sales in 2010, and the brand introduced new products like the LTO Spicy Trio, which featured Spicy Queso and Jalapeño Sour Cream. Moe’s plans to open 65 locations in 2011, including 40 stores in Istanbul.

Purchased by Roark Capital Group earlier this year, Wingstop saw sales in Q1 increase 2.5 percent over the same quarter last year, and it may have Super Bowl Sunday to thank. The company sold a record-setting 5 million wings on game day. National Football League legend and spokesman Troy Aikman joined the company’s board of directors in February and helped launch the Glider, Wingstop’s first chicken sandwich. The Texas-based brand is on the path to opening its 500th location this fall and is also set to add another 20 stores in Mexico over the next three years. 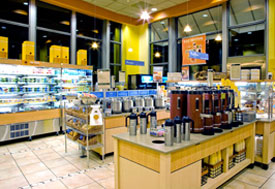 The bakery chain has plans to open more than 20 units this year in markets as close as New York and far away as Bangalore, India. With nearly 15 new menu developments since last November—including a turkey, cranberry, and brie sandwich; a Greek salad; and five new cupcake flavors—and the launch of a refresh program, which features larger menuboards and updated furniture packages for its cafés, Au Bon Pain wants to keep its regulars coming back for more.

As a brand with only nine company-owned stores, Taco John’s continued to emphasize its franchise focus last September when it offered new franchisees waived royalty fees during their first year of operations. The taco joint ended the year with 418 franchise locations and saw average unit sales of $725,000 in 2010. It then turned its attention toward the digital world. Launching the “My Town Mania” initiative, an online loyalty program, Taco John’s has grown its mobile database by 1,746 percent.

With health on its mind and menu—it was named one of Parents magazine’s 10 Best Chain Restaurants—Souplantation/Sweet Tomatoes pulled in $295 million from its 118 units in 2010. Perhaps the biggest change for the brand this year was the launch of its new bite-sized Souplantation Express, which opened its first location in January in Carlsbad, California. The company plans to open four additional Express locations, as well as eight of its buffet-style restaurants, over the next 12 months and is expanding its catering service in San Diego, Houston, Dallas, and North Carolina. 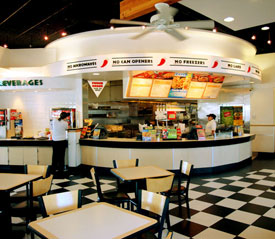 You may have seen CEO David Kim on the CBS hit, Undercover Boss, on which he gave one unsuspecting Las Vegas manager a Baja Fresh
franchise of his very own, but that’s not all the company was up to last year. The 187-unit chain launched its “Earth Fresh” initiative in March, which introduced products like unbleached recycled burrito wrapping paper and biodegradable plates, in an effort to steer the company toward sustainability.

Still working toward recovery after filing for Chapter 11 bankruptcy in April 2010 and being bought out by Luby’s the following July, the hamburger joint brought in $290 million in U.S. sales last year. Although it saw a loss of almost 50 units in 2010, the company is still rolling out new products, like wild boar burgers—part of the Fudds Exotics line—and Fudds Favorites, a line of premium burgers like the Bacon Cheddar and the Three Cheese.

Hoping to reach the 2,000-store mark by 2020, Firehouse signed development agreements in March to open 429 new stores across the country over the next several years. Targeted markets include Iowa, Louisiana, Michigan, Nebraska, Ohio, and Texas. The Jacksonville, Florida–based sub brand has also been busy launching a national fundraising campaign, which kicked off in May, to raise money for first responders and tornado survivors who suffered from the Southeast storms this past spring.

Growth is top priority for the smoothie brand, with the January opening of its first South Korean store and plans to develop 50–70 locations before the year is up. The company’s 392 franchised units saw a 4.1 percent sales increase in Q1 over the previous year, and in May, Jamba signed a 10-year, 80-store development agreement in Canada. Fresh products have been rolling out, including its Whirl’ns line of frozen yogurt, probiotic yogurt smoothies, and Fruit Refresher beverages made with coconut water.

Breaking into the New Jersey market last November (with plans to open an additional 35 stores in the Northeast over the next eight years) and promising to more than double its presence in the Lone Star State within four years, Corner Bakery Café is on a roll as it prepares to turn 20 this November. The line of cafés ended the year with U.S. systemwide sales of $247 million and celebrated the new year with the launch of its “100 under 600” program, featuring 100 sandwich, panini, salad, and soup combos with less than 600 calories. 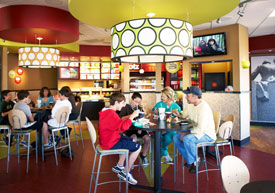 With a focus on making the brand “Lotz Better,” Schlotzsky’s launched a nationwide initiative to re-image more than 350 stores by the end of 2011. Keeping its eye on bright colors, modern furniture, and a circle theme—a tribute to the chain’s toasted round sandwiches—the prototype also unleashed a new service model in which crewmembers deliver food to tables. Schlotzsky’s plans to have 600–700 stores by 2015 and is actively developing in untapped markets like Atlanta, Denver, and Phoenix. 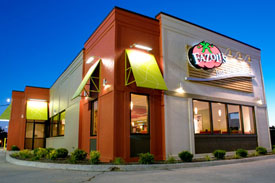 Fazoli’s ventured into an unfamiliar frontier last October, opening its first retail location in a St. Louis Walmart. The company also introduced a new service style and design, featuring bold colors, fun graphics, and meals served tableside, in Kentucky, Missouri, Nebraska, Wisconsin, and Illinois. More than 60 of the chain’s 232 units have undergone the makeover, and 77 additional units are scheduled to be remodeled this year.

The bagel shop is a new addition to the Contenders list and another company under new ownership this year. It was acquired by Le Duff America in March, and the Vermont-based brand reported U.S. sales of more than $203 million in 2010. In May, the 300-unit chain introduced its first-ever “Skinny Bagel”—designed for calorie-conscious diners—and, in 2010, renovated 45 bakeries, with plans to complete another 40 bakeries before the end of 2011.

Next: Moe’s On a Mission

HMSHost Leads Food Tech Evolution Inside Airports
The Next Wave of On-Demand Restaurant Delivery
Is Your Restaurant Franchise Marketing Outdated?