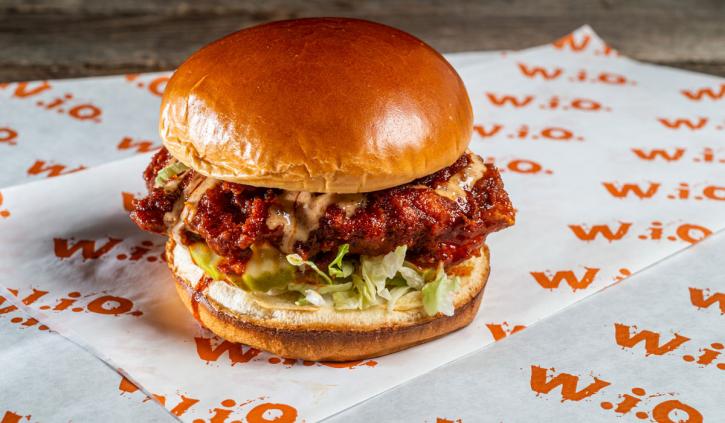 The chicken category has been on fire since the pandemic began in March 2020.

After Popeyes' chicken sandwich went viral in the latter half of 2019, numerous chains followed with their own version of the item, including big-time names like McDonald's, KFC, Burger King, Wendy's, and Zaxby's. Additionally, the food segment has seen an influx of chicken-based virtual brands like It's Just Wings by Chili's, Cosmic Wings by Applebee's, and the Wing Experience by Smokey Bones. Data from The NPD Group shows chicken entrees at U.S. restaurants were up 4 percent in the year ending April 2021.

However, the rise in demand—combined with an ongoing labor crisis—has caused shortages and price inflation. KFC told operators in April to remove chicken tenders and Nashville Hot chicken items from online menus because of supply issues, The Wall Street Journal reported. Additionally, 770-unit Bojangles had supply challenges with its Chicken Supreme tenders this past spring. In terms of price increases, Wingstop CEO Charlie Morrison told CNN Business in late June the wholesale price of wings in 2020 reached as low as 98 cents, but now it's $3.22. U.S. producer prices for processed poultry rose 6.6 percent from May to June, according to the Bureau of Labor Statistics.

Despite headwinds, a host of chicken chains have forged ahead with skyrocketing sales and a plethora of franchising deals. The expansion efforts target areas across the country, including California, Colorado, Texas, Massachusetts, Florida, and much more. Operators view the volatile labor and price market as short-term and are willing to play the long game. Here are 10 concepts with fewer than 100 units ready to grow and command more market share in the coming years. 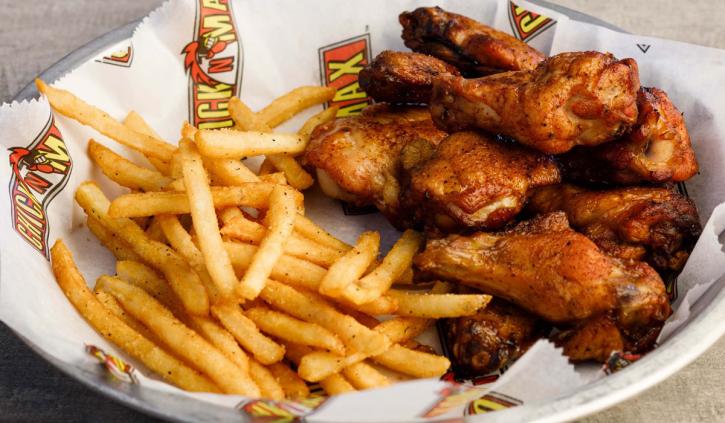 The chain was founded by Max Sheets in 2018, with a vision to become the home of the better-chicken sandwich. Chick N Max has three locations throughout Wichita, Kansas, with a fourth coming soon. In late March, the fast casual announced its first franchising program, with plans to target multi-unit operators across Colorado, Kansas, Missouri, Nebraska, Oklahoma, Texas, and the Southeast. Chick N Max expects to reach six locations by the end of 2022 and open as many as five new units each year after that.

With expansion on the horizon, Chick N Max is also working on prototypes, which Sheets described as “Chick N Max 2.0.” With each new location, the brand is continuing to evolve the look, feel, and size. The first store is 3,000 square feet, but the second and third are 2,800 and 2,400, respectively. The next prototype is roughly 2,100 square feet. Sheets even mentioned the possibility of looking at double drive-thrus. Amid the COVID pandemic, digital and off-premises channels skyrocketed, and drive-thru more than doubled. 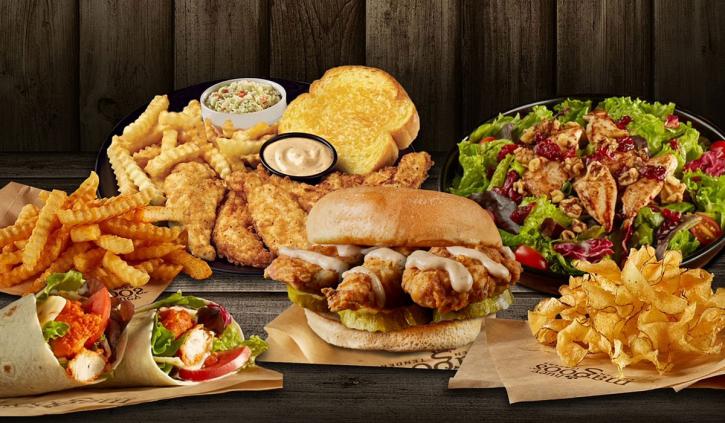 Under the leadership of former Wingstop executives since 2016, the chicken chain has grown to 18 units across its home state of Florida, Georgia, and Mississippi. All but one of those units are run by franchisees. That footprint is quickly changing as Huey Magoo’s expects to reach roughly 25 stores by the end of 2021 and open a record-breaking 15–20 locations in 2022. In the years thereafter, the brand thinks it can realistically open 25–30 stores annually, putting it on pace to triple its unit count by the close of 2023.

There are five ways to open a Huey Magoo's: In-line, endcap with drive-thru, conversion to freestanding drive-thru, new build, and express. Five of the 18 open units have drive-thru, and those stores boast the highest volumes in the system. 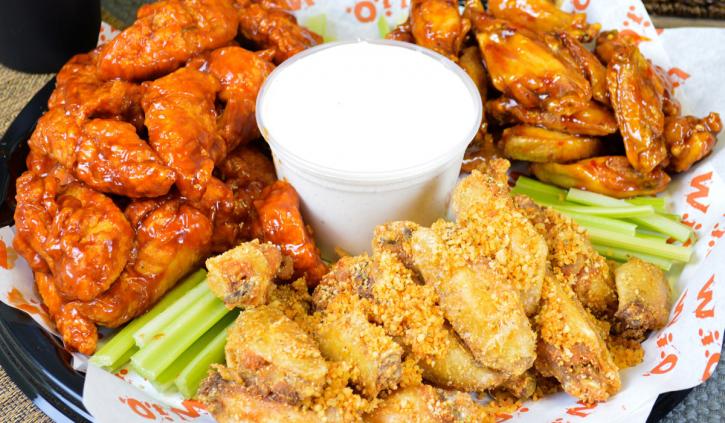 This year is proving to be a turning point for the emerging wing chain, which has just over 10 units. So far, five new operators have signed agreements for 13 locations across the Eastern and Southern U.S., expanding the chain's presence to markets like Atlanta, Dallas-Fort Worth, and Orlando. Now, Wing It On! is focused on continuing to build its footprint in fast-growing areas along the East Coast and the South, with a priority on Long Island, Boston, Raleigh-Durham, Central Florida, and Houston. The brand is aiming to have 25 units committed by the end of the year.

In January, Wing It On! introduced thigh wings to its menu to offset the shortage and high cost of chicken wings. The new menu item was a success, helping increase sales volume by 27 percent at participating locations. A new Nashville hot chicken sandwich and sauce option for wings and boneless tenders was introduced in March, as well. 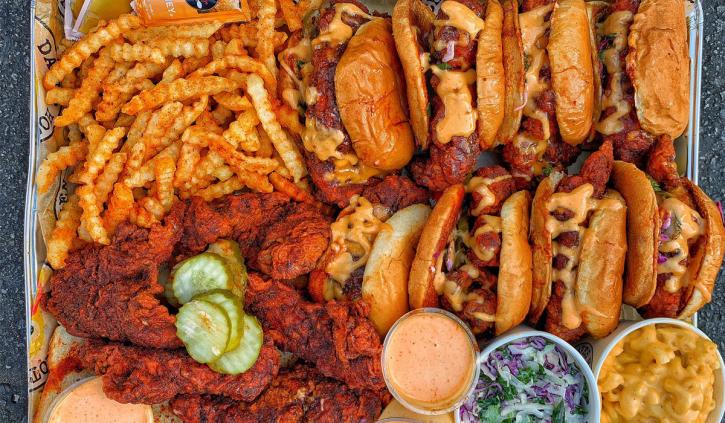 When the pandemic first hit in March 2020, Dave's franchise sales slowed, but only for a couple of weeks. Business surged, and the growing chain was able to “sell more than we ever dreamed of” in terms of franchise territories, said CEO Bill Phelps. Dave’s sold the rights to 285 locations in 2020. That figure is now in the 400 range, which includes more than a dozen states and markets like Boston; Oklahoma City; Indianapolis; Fort Wayne, Indiana; Cleveland; and Columbus, Ohio.

Dave's has more than a dozen locations, and is projected to across the 40-unit mark before the end of 2021.

The brand's franchise offering became more enticing throughout COVID as the chain proved it was pandemic-proof. At the onset of the crisis, the brand saw 9 percent of its business come from third-party deliveries and zero from online orders. In two weeks, the chain's entire off-premises channel ballooned to 60 percent, and eventually peaked at 63 percent. Instead of being "screwed," as Phelps once feared, “business went through the roof,” as more consumers turned to convenience and mobile ordering. 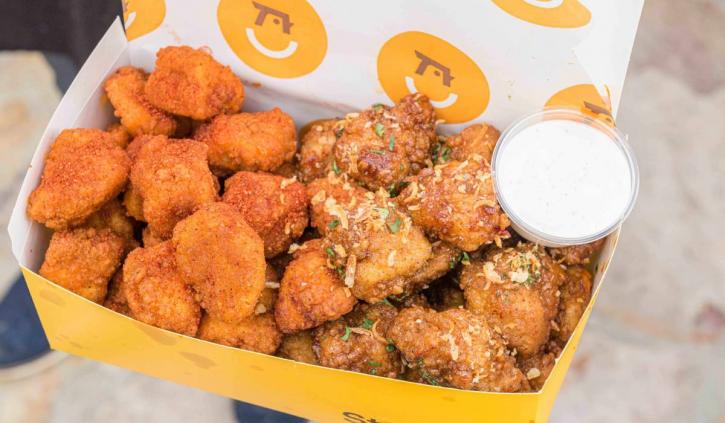 The company prides itself as the nation's first "super-premium" fast-food concept, and that may be the best way to describe how 2021 is going. Year-to-date, same-store sales rose 75 percent against 2019 and 36 percent versus 2020. This growth comes on the heels of a successful 2020 despite the pandemic, in which Starbird reported a 36 percent increase in systemwide revenue year-over-year and industry leading sales per square foot.

The red-hot pace has put the California-based brand in a position to do something it has never done before—a nationwide franchising program, set to kick off within the first three months of 2022. To grow the initiative, Starbird is partnering with Pivotal Growth Partners, which has previously assisted the likes of A&W Restaurants, Baskin-Robbins, Big Boy Restaurants, Dunkin’, Long John Silver’s, Marco’s Pizza, and Yum! Brands. The chicken brand’s diverse footprint features five streetside stores, two ghost kitchens, and locations in San Francisco International Airport and Levi’s Stadium—all based in the surrounding Bay Area. It plans to have 11 stores open to finish 2021 and 16 to 20 by the end of 2022. 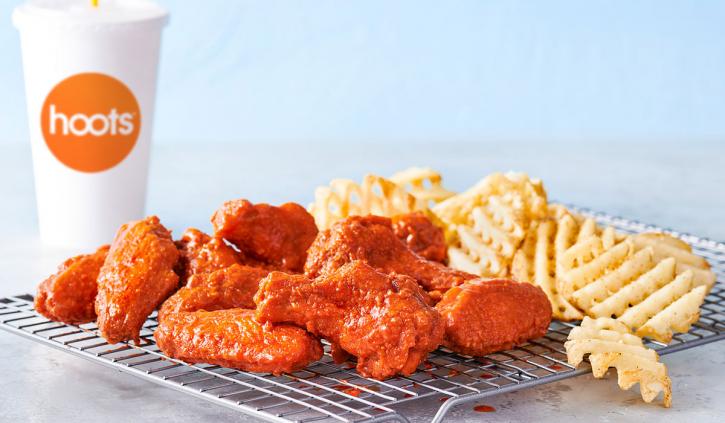 In the past decade, Hooters has been well aware of the rise in fast casuals, which feature a smaller footprint, limited overhead, and increased convenience through takeout and delivery. The sports bar responded by forming fast-casual offshoot Hoots Wings, which is signing franchise deals at a blistering pace. The brand has eight locations across Georgia, Illinois, Texas, and Florida, and is targeting expansion in the Southeast, Midwest, and Northeast.

In June, Hoots Wings announced the signing of a 16-unit deal for locations in the greater Philadelphia area. All locations are expected to be open by 2026, with the first one or two locations debuting by the end of this year. The overall plan is to bring 50 locations to key markets across Pennsylvania in the next five years. In February, franchisee AE Restaurant Group signed on to open 60 Hoots Wings locations in Texas, specifically targeting the Dallas-Fort Worth Metroplex and Austin. The operator expects to open at least six locations in 2021, and eight to 10 locations each year thereafter. 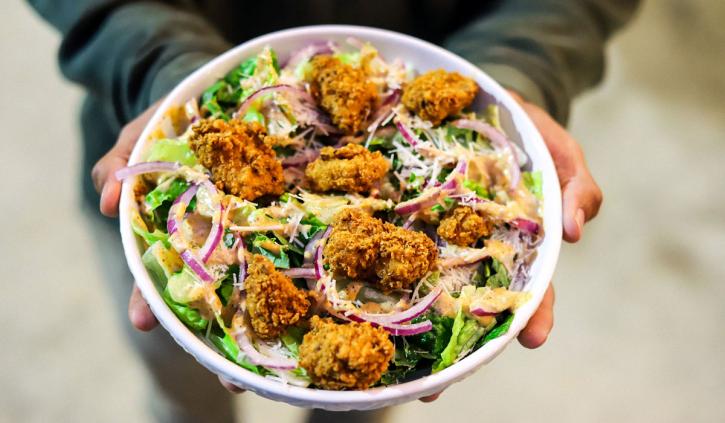 The mission of Project Pollo is to change consumption and challenge chicken with its plant-based selection. In less than a year, the brand has opened eight locations across Dallas, Austin, and San Antonio. The team has laid out a plan to reach 100 locations by 2024.

The locations have similar colors and ambiance, but all look different and come in a variety of sizes. One store is 560 square feet and generates almost $3,000 per square foot. Another location was converted from a 3,040-square-foot Jack in the Box, which has been dual-purposed into an office for district managers and directors. Founder Lucas Bradbury told QSR “we’re going to probably spend less on opening 12 locations than an average McDonald’s will spend on their location, yet generate three to four times the amount of volume.”

The menu is anchored by chickenless sandwiches, including the Spicy Project—Signature-Breaded Chickn covered in Spicy Garlic Buffalo Sauce, House Ranch, and served with a pickled jalapeño. Other offerings include chickenless strips and wraps, and sides like loaded fries and mac and cheese. 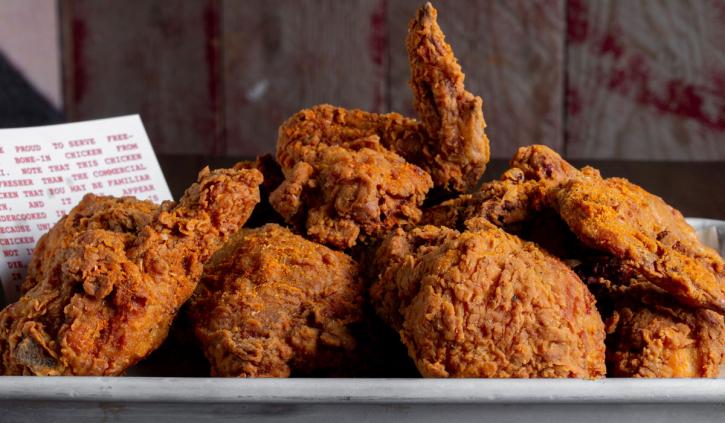 The concept, created by Michael Rosen, started in San Diego in a shack behind Juniper and Ivy, a fine-dining restaurant he founded. The chicken chain has since grown to four open stores, including one on the Las Vegas Strip. Two more are to come in Denver and Utah.

The growth in sales caught the eye of investors. Savory, a Mercato Partners Fund, launched an inaugural $90 million fund in June 2020 with the goal of fueling growth and injecting capital into up-and-coming brands. In September, the fund announced a controlling investment in The Crack Shack, with a goal of expanding the restaurant by 35 to 50 units in the next four to five years. The growth strategy is to place the chicken brand in secondary and tertiary markets in states like Utah, Arizona, and Idaho. The Savory team doesn’t want to lean too far into digital or lean too far into sit-down—they’d prefer a happy medium. The Crack Shack’s initial boxes were around 6,000 to 6,500 square feet, and Managing Director Andrew Smith said there will be smaller ones with less dine-in capacity, but there’ll also be bigger stores than what people would expect. 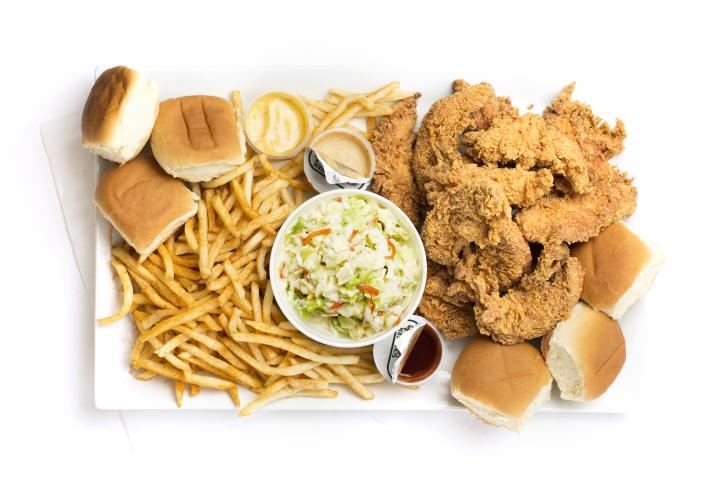 The brand's franchising efforts are led by industry veterans Tom O’Keefe and Nick Binnings. The duo has more than 50 years of combined experience when it comes to restaurant operations and franchising.

O’Keefe said the Shreveport, Louisiana-based Southern Classic initially thought about franchising about 10 years ago, but the chain backed off because it was building its company base. Over time, the restaurant has developed what O’Keefe describes as a cult-like following in Northwest Louisiana, to the point where it felt franchising was the best move. The chicken company is targeting areas across Louisiana, Mississippi, Arkansas, and Texas for the first wave of expansion. Currently, the chain has one unit in Arkansas, two in Texas, and 14 in Louisiana. Binnings explained that Southern Classic will follow a “wagon wheel” strategy in which the growth begins in active markets. Once the brand opens units in these areas and sees success, it’ll continue expansion into the bordering states.

Operating with a drive-thru and walk-up model, the chain saw systemwide sales grow 20 percent year-over-year in 2020. 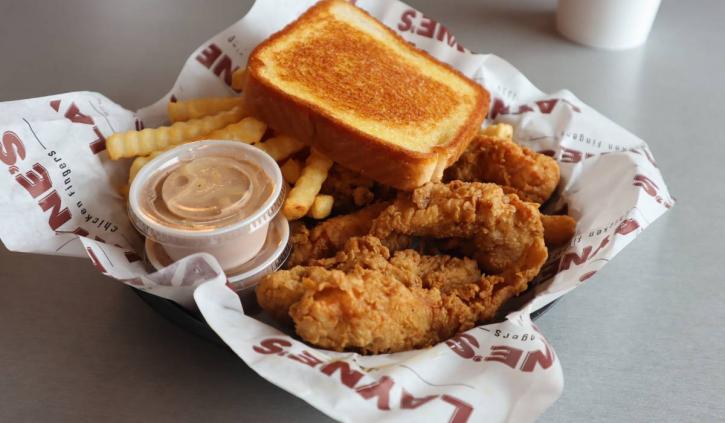 The brand has been around since 1994, primarily as a mom-and-pop company based in College Station, Texas, near the campus of Texas A&M. Four years ago, Garrett Reed and his business partner purchased the the small chain with the specific purpose of evaluating the existing infrastructure and policies and transforming the mom and pop into something that could be repeatable.

In the four years since then, Layne's expanded to eight stores and refined its operating model—propping up all the things it did right and pivoting away from all the things it did wrong. During that process, the chain hired COO Samir Wattar to oversee the nuts and bolts of franchising such as purchasing, distribution, and supply chain. Once the foundation was set up completely, Layne's began a full-blown franchising effort six months ago, with a primary focus on expanding throughout Texas.