10 Fast-Food Storylines Everyone Was Talking About in 2021 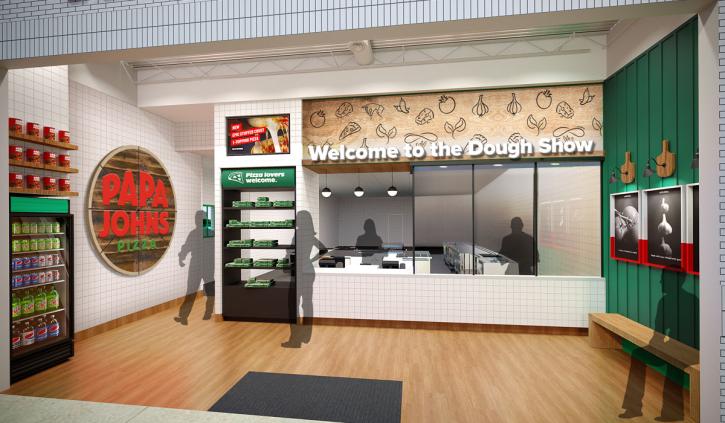 It was a year unlike any in recent memory, even in comparison to 2020. For instance, before 2021, Muscle Maker Grill (2020) and Wingstop (2015) were the last two limited-service brands to go public via an IPO. However, this year, four brands reached the stock market in a matter of months, and two more are scheduled to break into that sphere in 2022. Additionally, 2020 may have had the biggest transaction in years (Inspire's $11.3 billion purchase of Dunkin'), but 2021 won in terms of quantity, with more than a dozen restaurants and private-equity firms making key financial moves.

READ MORE: 22 Restaurant Deals that Changed the Industry in 2021

All of this was done under the looming shadow of industrywide labor shortages and record-breaking inflation, two trends that industry experts don't expect to relent for the better part of 2022. The year was packed with stories that will have impact in 2022 and beyond. Here are QSR's top stories for the counter-service restaurant industry in 2021.

Note: If viewing on desktop, click arrows in picture to see the next slide. 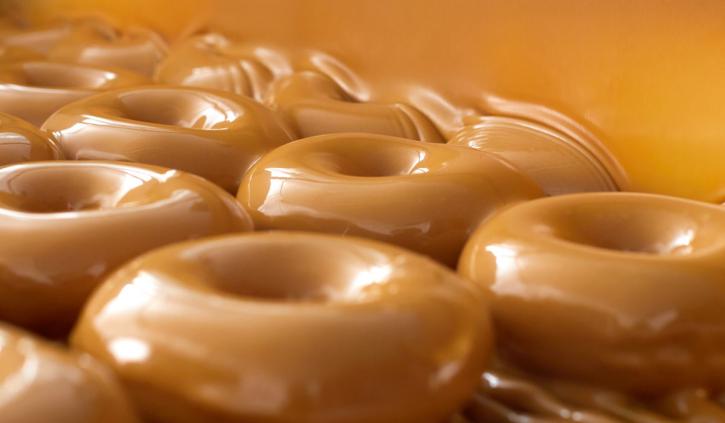 This year proved to be an explosive run to the stock market, with Krispy Kreme, Dutch Bros Coffee, Portillo's, and Sweetgreen all trading before the end of 2021. That group will soon be followed by MOD Pizza and Panera Brands in 2022.

Krispy Kreme was first to make the move, announcing its intentions to do so in early May. At the start of July, the doughnut chain announced an initial public offering of 29,411,765 shares at $17 per share, raising $500 million, equal to a value of $2.7 billion. The doughnut chain was public from 2000 to 2016 before being bought by JAB Holding for $1.35 billion. JAB also acquired Panera for $7.5 billion in 2017 and purchased British chain Pret a Manger for $2 billion in 2018.

The most recent announcement came from MOD Pizza, a chain that opened a net of 22 stores in 2020 and saw digital revenue soar 275 percent. MOD is the 57th biggest quick-service restaurant in the nation in terms of U.S. sales, according to QSR 50 data, and the largest among pizza fast casuals. The chain posted an AUV of just under $1 million last year. 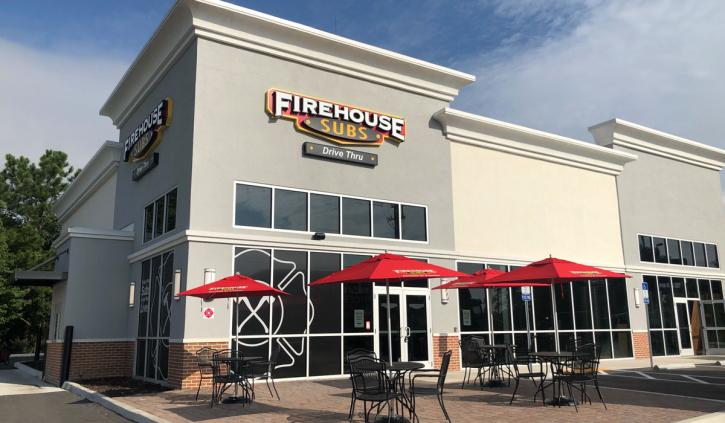 A host of quick-service chains and private-equity firms viewed 2021 as a time to capitalize on a new playing field produced by COVID.

The biggest move was Restaurant Brand International's $1 billion acquisition of Firehouse Subs. Since 2010, the sandwich chain has tripled in size to roughly 1,200 stores and quadrupled systemwide sales to an expected $1.1 billion this year. Year-to-date through October, U.S. same-store sales were growing 20 percent versus 2019, and the brand projects $50 million in adjusted EBITDA for the full year.

Additionally, FAT Brands bolstered its fast-casual market share with the $442.5 million purchase of Global Franchise Group and the $130 million acquisition of Fazoli's. 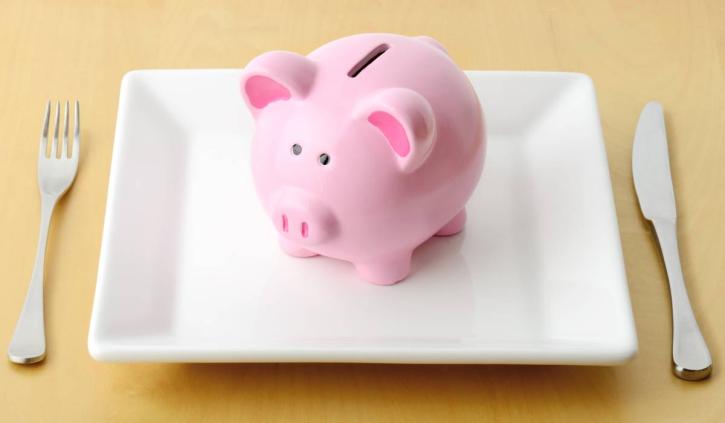 The index for food away from home rose 5.8 percent year-over-year in November, the biggest change since the period ending January 1982. That included a 7.9 percent increase in limited-service meals year-over-year. In October, quick-service menu items rose 7.1 percent in the past year, the largest 12-month increase in recorded history.

Despite the trend, major quick-service players like McDonald's and Chipotle haven't noticed much pushback from customers, who seem willing to accept the hikes.

“The 6 percent has been pretty well-received by customers,” CEO Chris Kempczinski said in October. “We do certainly have a very big focus to make sure that we are balancing cost pressures and being able to cover those with making sure that our value perception by customers continue to be favorable, and we are continuing to see those surveys and scores from a value favorability perspective still positive from customers.”

However, some say the bubble will soon burst. Fazoli's CEO Carl Howard believes "stealth inflation" (aka the nickel and dime increases of menu items) is “going to smack the consumer right in the face” in the coming months. 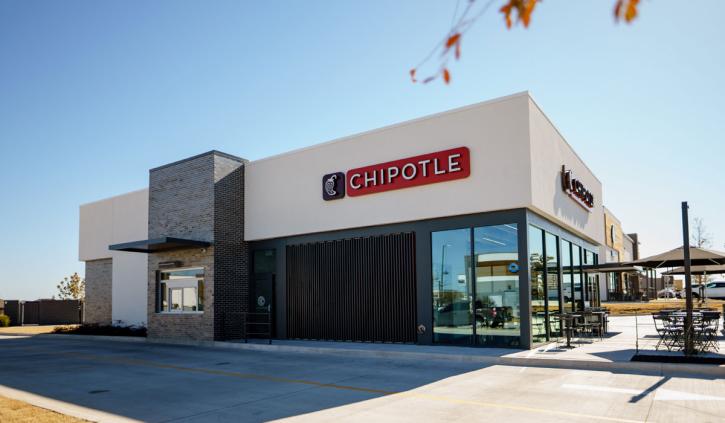 In response to the labor shortage, brands have worked to improve recruitment and retention with pay increases.

Starbucks announced in late October that it will raise its minimum wage to $15 per hour by next summer after committing to do so in December 2020. By the summer, average pay for all U.S. hourly workers will rise to nearly $17 per hour—up from $14 per hour—with barista hourly rates ranging from $15 to $23 per hour based on market and tenure. McDonald's increased hourly wages at company-run restaurants to an average of $13 per hour and will bump it to an average of $15 per hour by 2024. The news came just after Chipotle announced it was raising its average wage to $15 per hour.

Managerial workers are being rewarded, too. Whataburger promoted all of its general managers and pushed their salaries to six figures. And at Taco Bell, general managers in company-owned restaurants have a base pay of $80,000, with potential to earn up to $100,000 with bonuses. 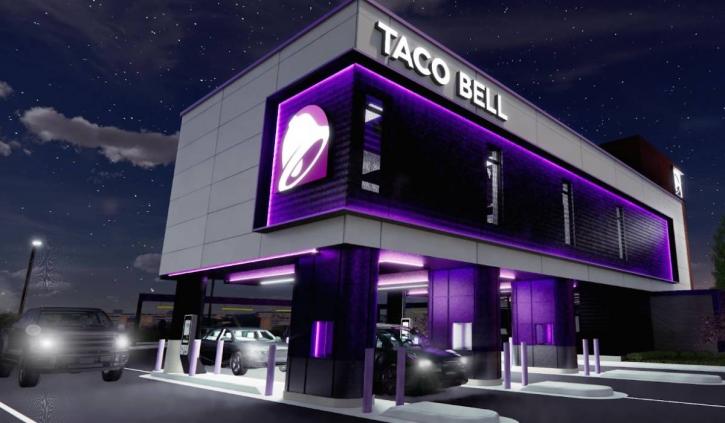 When the pandemic first arrived, consumers turned to drive-thru in bulk, and the channel's acceleration hasn't stopped since then. Drive-thru, which represents 52 percent of off-premises traffic, increased visits by 9 percent for the year ending October, and by 23 percent compared to two years ago, according to the NPD Group.

Quick-service chains have responded by giving consumers exactly what they want. In December, Chipotle unveiled its first Chipotlane Digital Kitchen, which features a mobile order drive-thru, walk-up window, and no dining room or front line. As of September 30, there were 284 Chipotlanes, including 12 conversions and eight relocations. Chipotlanes launched in early 2018 and are opening with about 15 percent higher sales compared to non-Chipotlanes.

Several brands are moving toward double drive-thrus, or even triple drive-thrus in Portillo's case. Taco Bell is taking it a step even further with its Defy concept—a 3,000-square-foot, two-story model with four drive-thru lanes, including one traditional lane and three others specifically for mobile or delivery order pickups. There’s also digital check-in screens that allow mobile order consumers to scan their order via a QR code and pick up food through a contactless proprietary “bell-evator” lift system. 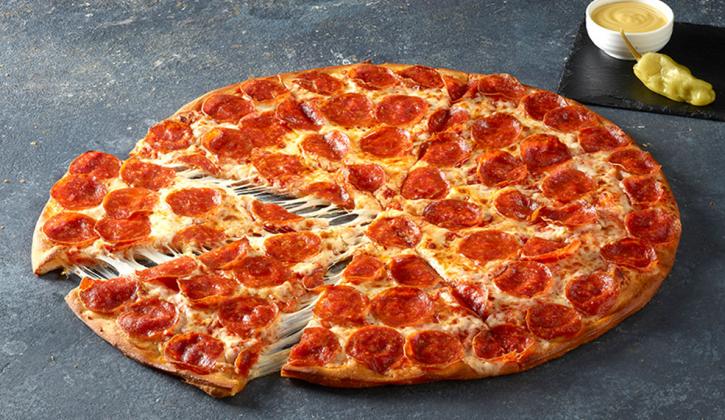 Franchising efforts have ramped up across the industry, including some initiating their first program, such as Caribou Coffee, H&H Bagels, Miller's Famous Sandwiches, and Smalls Sliders.

In other cases, brands are setting new development benchmarks as operators look to take advantage of the post-pandemic landscape. For instance, Papa Johns signed a deal with Sun Holdings to open 100 stores across Texas through 2029—the largest domestic development agreement in company history. Also, Slim Chickens, which has more than 750 locations in development, recently announced an unprecedented 60-unit deal for the entire state of Indiana and the Southeast region of Florida. Wingstop continues to lead the fast-casual wing category, as well. The chain achieved another record quarter with 49 net new restaurants in Q3. The brand finished the quarter with 1,673 stores systemwide, a nearly 200-unit increase year-over-year. 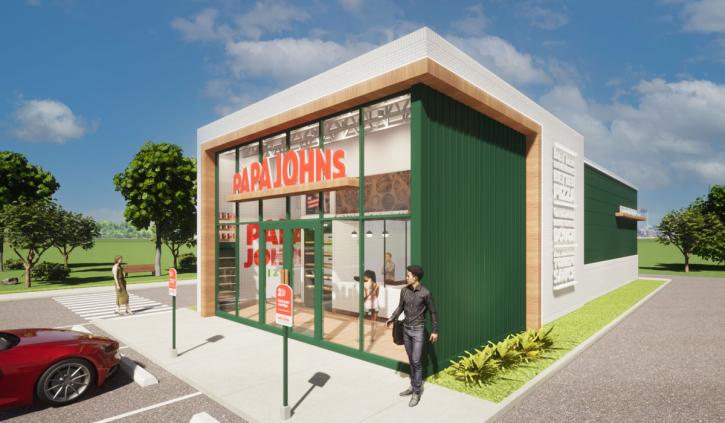 For some, 2021 was the time to revitalize branding and consumer perception.

In November, Papa Johns unveiled a fresh logo (yes, the apostrophe is gone) and visual brand identity, as well as a customer-centric restaurant design that offers a streamlined, flexible environment for operators to capitalize on a changing restaurant world. The new brand identity centers on Papa Johns' premium-ingredient platform. The brand went as far in this effort as redesigning its typography to create a custom font inspired by the way dough moves and stretches when employees make pizza. 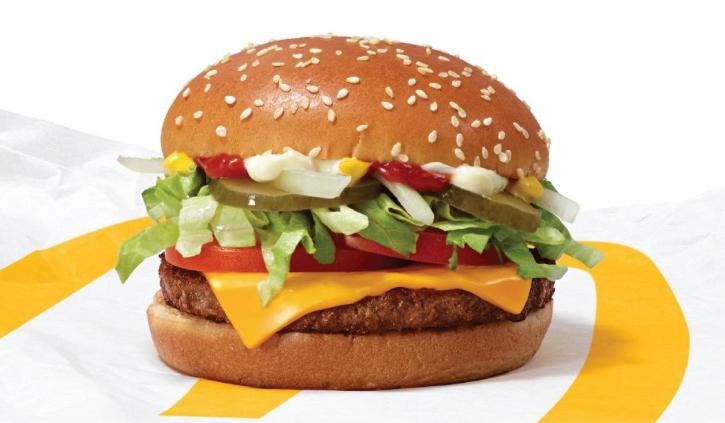 The acceleration toward more meatless options did not let up in 2021.

The most notable example is McDonald's McPlant burger. The patty is composed of ingredients like peas, rice, and potatoes. It's served on a sesame seed bun with tomato, lettuce, pickles, onions, mayonnaise, ketchup, mustard, and a slice of American cheese. In November, the fast-food giant began a "small-scale test" at eight restaurants to help it understand how offering traditional burgers and plant-based patties affects kitchens.

Wendy's attempted to build its plant-based game, too, with the test of its Spicy Black Bean Burger in June.  The full build boasts multiple levels of flavor from a signature black bean patty crafted with a blend of spices, layered with crunchy chipotle jalapeños for added texture, creamy, expertly melted pepper jack cheese and a spicy chipotle sauce. 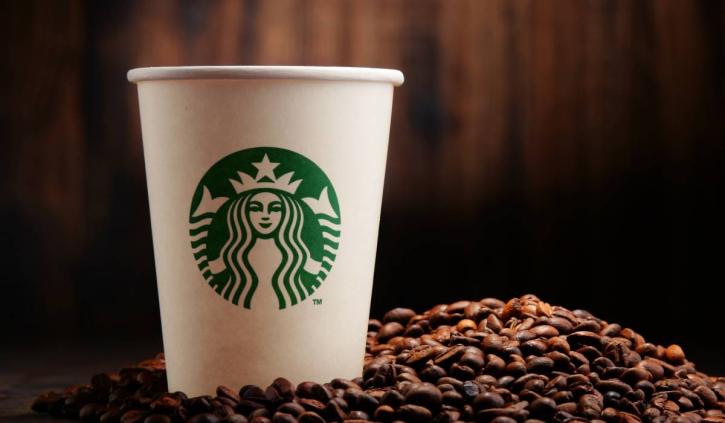 In 2020, only 1.2 percent of workers at food services and drinking places were unionized, according to the Bureau of Labor Statistics, making it one of the least organized industries in the nation. But recent events suggest the tide may be turning.

In December, Starbucks employees at one Buffalo store voted in favor of unionizing, becoming the first to do so among the chain's more than 8,000 U.S. corporate locations. The measure passed by a 19-8 vote. The employees are supported by Workers United, an affiliate of Service Employees International Union. Three locations petitioned to vote in August. A second store declined by a 12-8 margin and a third unit voted 15-9 in favor of a union, but seven ballots were challenged, so a definitive ruling couldn't be reached.

Also, Burgerville announced earlier this month that it ratified the first fast-food labor contract in the U.S. The deal involves the Burgerville Workers Union, which represents five of the chain's 40 locations. The tentative agreement came after three years and 51 negotiation sessions. Under the guidelines, All hourly employees will receive wage increases that are 25 cents per hour more than the highest minimum wage between Oregon and Washington, until the starting wage of either state reaches $15. Burgerville already adopted this policy in 2019 and has so far reached starting wages of $14.25 an hour. The contract is in effect until May 2023. 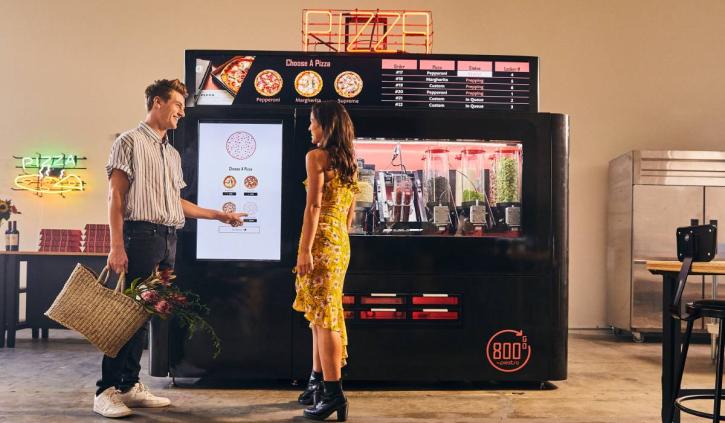 Labor shortages and consumer demand for convenience is pushing brands toward automation, especially in the pizza category.

800 Degrees Pizza and restaurant tech company Piestro partnered to form 800 Degrees Go, a hub-and-spoke model featuring pizza-making robots. The hubs will be small-footprint 800 Degrees Go kitchens—either in brick-and-mortar restaurants or delivery-only ghost kitchens—that will double as commissaries for Piestro's fully automated pizza-making kiosks, which will use the same recipes, ingredients, and cooking technology as 800 Degrees Go kitchens. The announcement came three months after the pizza fast casual revealed it signed an agreement for Piestro to produce 3,600 fully automated pizza-making kiosks in the next five years.