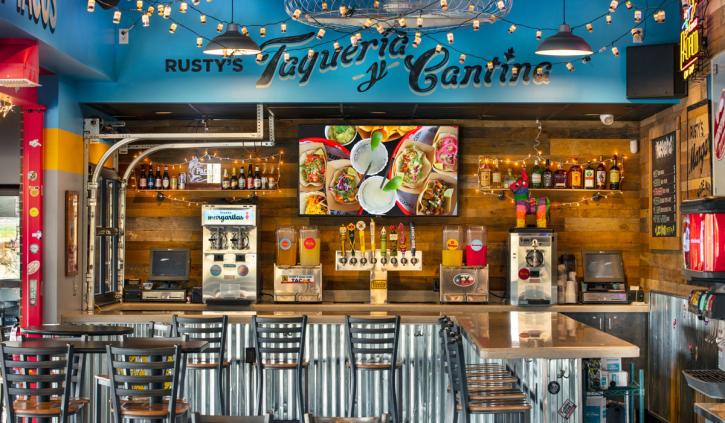 Taco Brands on the Rise

With thousands of restaurants covering the U.S., Chipotle, and Taco Bell sit atop the U.S.'s Mexican quick-service segment, with QDOBA and Moe's approaching four-digit territory.

Just ask Tacombi, which recently received a multi-million-dollar investment led by industry veteran Danny Meyer, or Fuzzy's Taco Shop, a chain that wants to surpass 300 stores across the nation.

With 100,000 restaurants closing since the start of the pandemic, the opportunity for mid-scale brands to expand has emerged. Here are 11 rising taco restaurants—with fewer than 200 units—hoping to rise out of the post-pandemic landscape. 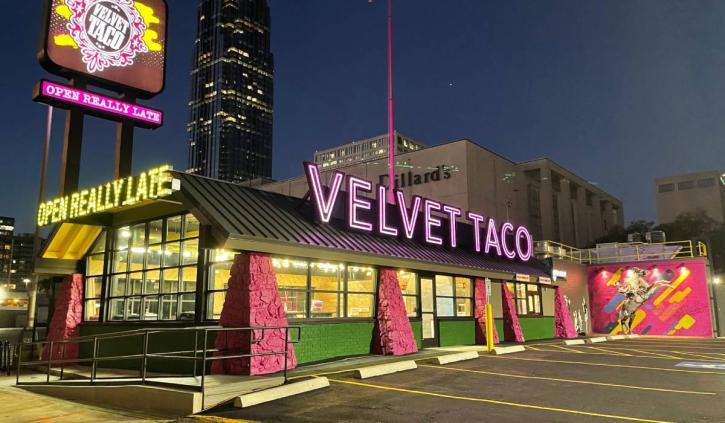 Toward the end of 2021, the taco chain announced private-equity firm Leonard Green & Partners as its new majority owner. The company replaced L Catterton, which served as majority owner for five years, and FB Society, the innovation lab that founded the brand 10 years ago.

In late February, Velvet Taco opened in Tulsa, Oklahoma—it's second unit in the state and 32nd overall. The chain plans to open several more locations in 2022 in Texas, Oklahoma, and the Carolinas.

The new restaurant maximizes space with dual prep lines and dedicated pickup windows for digital pre-orders. Off-premises sales are almost double what they were in 2019, and mix 50 percent.

Going forward, those channels will be supported by Velvet Taco's new loyalty program, The Velvet Room. It offers a tiered, visit-based program that rewards guests with unique offerings and VIP experiences without leaning into traditional discounts. 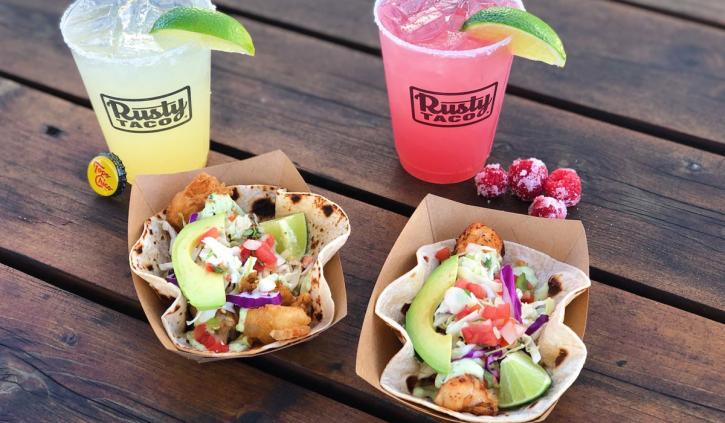 With the backing of multi-brand platform Inspire Brands, Rusty Taco has spent recent years setting itself up for growth, said President Brendan Mauri. Multiple franchise agreements were signed in 2021, which will lead to growth throughout Utah, Nevada, Virginia, and Texas. Several new operators are already a part of the Inspire family.

If the fast casual expands strategically, Mauri said there’s potential for 40–50 new units per year, possibly even higher. For 2022, the fast casual is eyeing 30 percent growth, which would be about a dozen restaurants.

The chain’s most recent opening came in San Antonio, a restaurant owned by Andy Besing and Perrin Larsh of Lone Star Restaurant Group. The duo also operates four Arby’s restaurants. Mauri said warm weather states like Texas, New Mexico, and Arizona are attractive because of the outdoor patio potential, but he also notes franchisees have had success in Minnesota and Ohio.

Although more quick-service chains are exploring drive-thru, Rusty Taco decided to move against that trend because of its scratch-made menu. However, the fast casual does plan to investigate mobile order pickup windows. 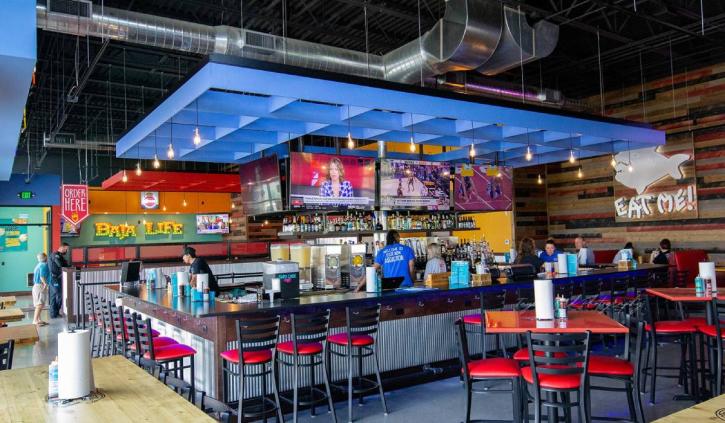 CEO Paul Damico and Aziz Hashim, founder and managing partner of Fuzzy’s Taco Shop majority owner NRD Capital, felt the chain could serve as the foundation of a larger, multi-brand company, guided by the elevated atmosphere at the bar, patio, and dining room.

The new entity is called Experiential Brands, with Fuzzy's becoming the first member and the example of the "growth oriented franchised brands" the company will look to purchase. Damico will also serve as Experiential's chief executive.

Damico isn’t sure yet how many restaurants Experiential Brands will ultimately seek, but he knows there’s a significant number of concepts—whether young and emerging or well-defined and mature—that are looking for growth capital or an M&A deal. At any given time, the CEO and his team are looking at two or three brands.

Fuzzy’s will position itself as an example of what growth should look like. The long-term goal is to double in size to more than 300 locations in the next five years. Texas, Oklahoma, Missouri, and Colorado will serve as growth markets for existing franchisees while new partners will focus on expansion in the Carolinas, Georgia, the Florida Panhandle, Alabama, and Tennessee. 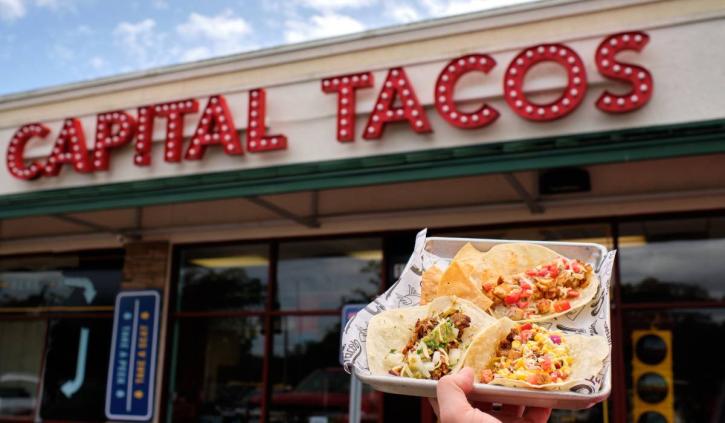 The fast casual was founded in 2013 in a 1,000-square-foot storefront in Land O' Lakes, Florida. The chain has since expanded to five units throughout the state, each with its unique atmosphere. As Capital Tacos moves further into franchising, it plans to keep that individualistic mindset by seeking second-generation spaces and transforming them. Target markets are Florida, Georgia, South Carolina, North Carolina, Tennessee, Arkansas, Alabama, Missouri, and Louisiana.

The company is prepped with a tech stack that includes Punchh, Olo, and Koala, and proprietary, custom-built kitchen display systems. Restaurants have seen a double-digit revenue increase over 2019, and a majority of the chain’s revenue is now digital.

“We’ve had literally hundreds of requests over the years—from guests who have visited our stores locally across Florida and from states across the country—asking if and how they can bring Capital to their hometown,” said Josh Luger, Capital Tacos’ operating partner and co-owner. “We’ve spent years with our heads down, building out and bulletproofing the concept before going back to these folks, as we are now, saying, ‘yes, you can’ and ‘here’s how.’ And the timing to do so is better than ever.” 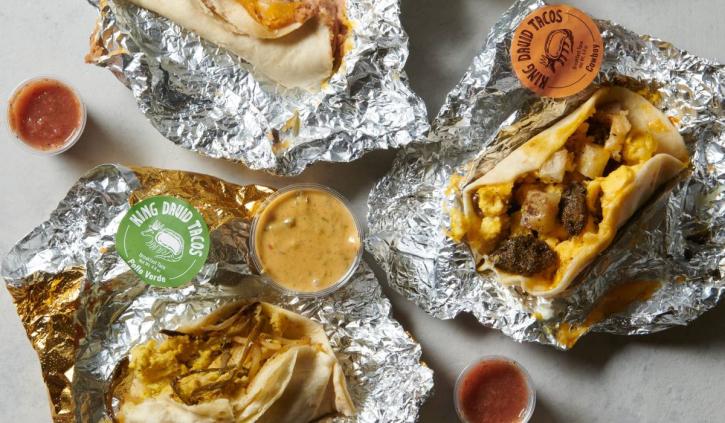 Recently, the brand partnered with Blank Street, a local coffee company, to launch a fleet of sustainable breakfast taco and coffee carts around the city. The carts will be fully battery powered with zero emissions.

The tacos can also be found at more than 50 retail locations, including coffee shops and Whole Foods. Founder Liz Solomon Dwyer said the brand plans on focusing its expansion efforts on more retail partnerships over the next three-to-five years. Growth will be mainly focused in the region with sights set on New Jersey and Connecticut as potential new markets.

"That seemed to be kind of a head scratcher because they’re delicious,” she said. “From my perspective, I thought breakfast tacos were the perfect food for the city because they lend themselves so well to grab-and-go convenience. They also hit on so many dietary preferences and needs, especially crunched meal times.” 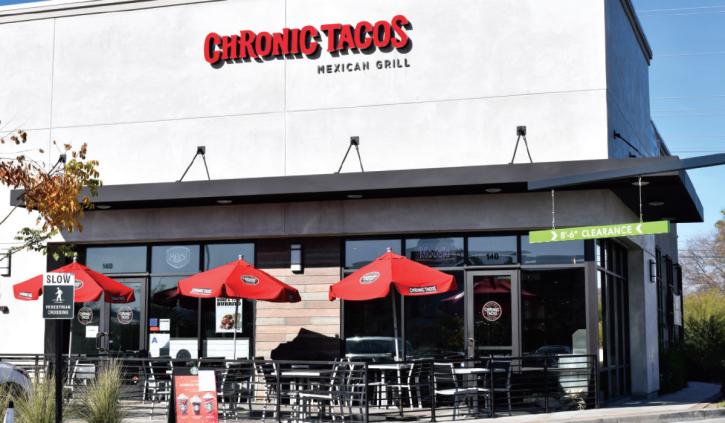 Overall, the brand has expanded to more than 50 restaurants after being founded in 2002 by friends Randy Wyner and Dan Biello. That includes an international presence, with three units in Japan and six throughout Canada. With same-store sales growing 8 percent year-over-year in 2021, Chronic Tacos is continuing to search for qualified franchise partners to help build the business.

The chain welcomes innovative and progressive partnerships to help build customer awareness. For instance, to celebrate National Taco Day in October, Chronic Tacos teamed up with Weedmaps, an online marketplace for cannabis users, to offer free tacos via the Weedmaps app. 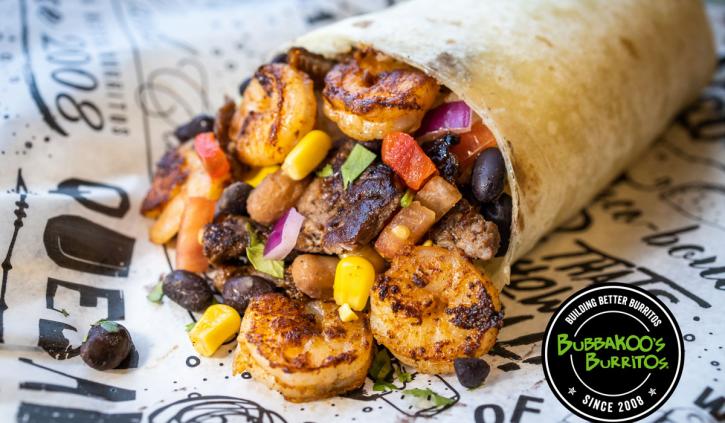 The company has more than 60 locations open across nine states and more than 100 in development.

To better cultivate its relationship with franchisees, the chain recently promoted Christopher Ives to CFO. He previously worked as vice president of finance and development, where he oversaw many aspects of financial operations, franchise development, and technology strategies.

“His analytical approach to our overall strategy and growth goals has resulted in increased sales, store unit profitability, and internal development growth for our partners. Our partners trust in his ability and look to him for guidance, which made the promotion to Chief Financial Officer an easy one,” said Paul Altero, co-founder of Bubbakoo’s Burritos.

To leverage digital growth and extra capacity, Bubbakoo's launched virtual brand Toss’ em Wing Factory last summer. Offering three styles of wings, traditional, boneless, and meatless which is a breaded cauliflower, customers can choose from 12 sauces ranging from “not spicy” to “really spicy” on their website, as well as two dry rub options. 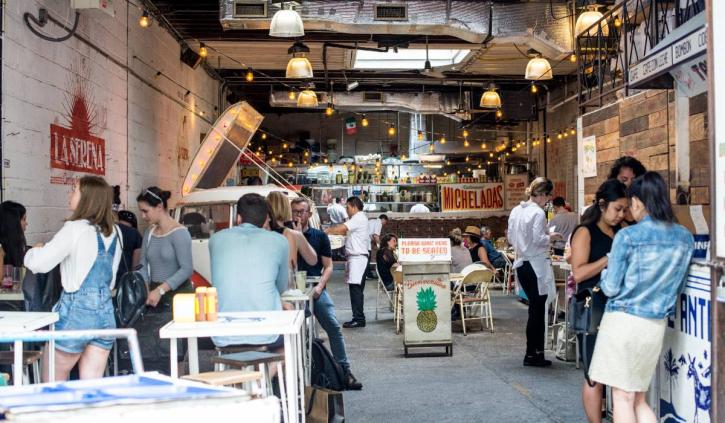 With the capital injection, the brand hopes to reach 75 stores across multiple formats and grow Vista Hermosa, its line of consumer packaged goods available in more than 800 locations, including Whole Foods.

Tacombi has returned to sales growth against 2019, boosted by its "rapidly expanding" takeout and delivery business and "outsized growth" on its website and mobile app, the company said. The $27.5 million investment will be used in part to power its omni-channel presence and develop and integrate "technology that will enable more efficiencies and enhance consumer and employee experiences."

The restaurant started as a taco stand on a Mexican beach in 2006, and opened its first U.S. taqueria in New York City's Nolita neighborhood in 2010. It has since expanded to 13 locations in New York, Miami, and Washington D.C. The company prides itself on authentic taco recipes and traditional Mexican bites and drinks, such as the Pollo Yucateco and Baja Crispy Fish tacos, La Bisteca and Pollo Superior burritos, and watermelon and pineapple aguas frescas. 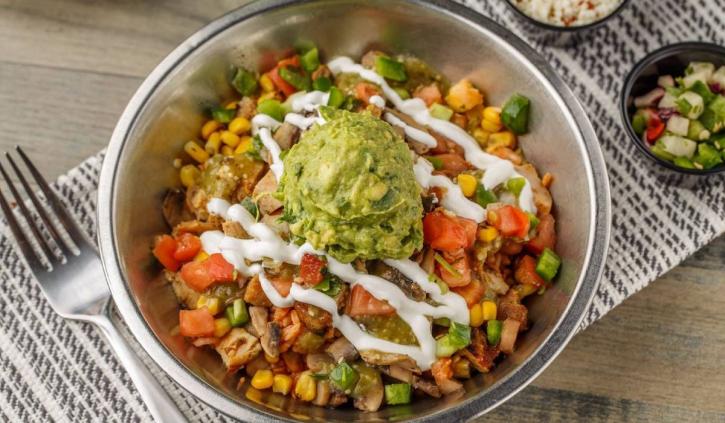 Uberrito plans to open 10–25 franchised stores in 2022 and roughly 15–20 each year afterward. The chain is focused on Sunbelt states like Texas, Oklahoma, Louisiana, South Carolina, Florida, and Georgia, and also Midwestern markets, such as Illinois and Minnesota.

Pete Pascuzzi, a former franchisee that joined the brand as CEO in 2020, said he understands what it’s like inside and outside the four walls of a restaurant, and he plans to approach development from an operator’s mindset.

“Franchising is a long-term commitment, and you must like the people you work with,” he said. “With that in mind, we made some shifts in our approach to growth. One of the most important changes is the idea that we’re not in the business of just selling franchises. A franchisee must be as good a fit for us as we are for them. While subtle, that adjustment has made a world of difference in our ability to talk with like-minded franchisee candidates that share our passion for scratch-made food and great customer service.”

With off-premises now occupying 66 percent of sales, future store designs will be built around the on-the-go consumer. As opposed to the larger 2,800-square-feet stores that sit 80 to 90 people and have patios, Pascuzzi envisions roughly 2,200 to 2,400 square feet with double drive-thru lanes. The inside lane would be for mobile orders while the other lane would be the traditional drive-thru lane with a menu board. 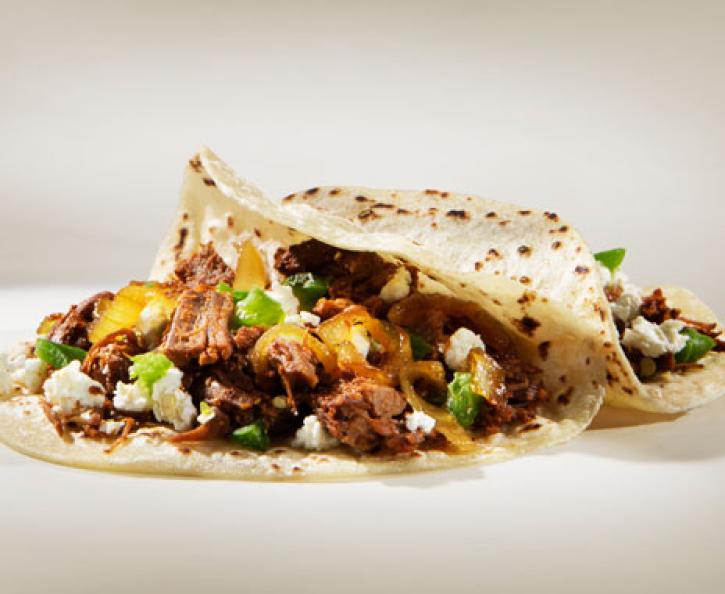 After its founding 1992, Pancheros has expanded to 13 states with roughly 70 locations, and more growth is on the way.

Those efforts will be aided by Joe Gale, who was hired as the chain's director of franchise development in 2021. He brings more than 20 years of relevant restaurant industry experience to the position. He spent the past two-plus decades with Coca-Cola, guiding sales directly with franchise brands and restaurant franchise owners. In his new position, Gale is prioritizing multi-unit franchise development deals across the U.S, and he will engage new franchise prospects looking to diversify their portfolios.

In November, Pancheros announced the opening of a new location in Moline, Illinois, which became the first unit to offer a mobile pickup window. In February, Pancheros opened a unit in Cherry Hill, New Jersey. 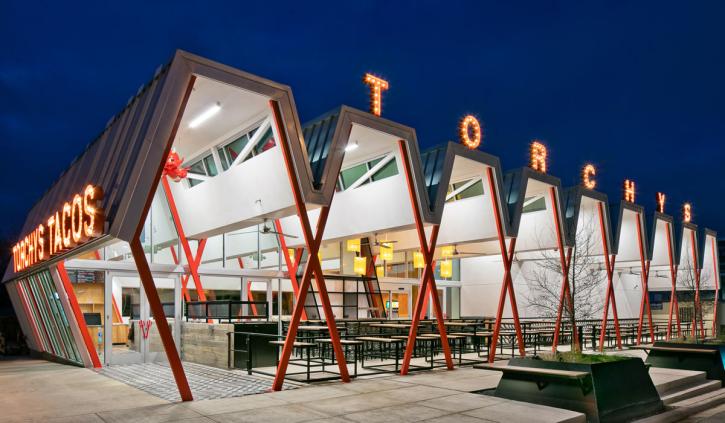 In November 2020, Torchy's Tacos announced it sold a $400 million stake to a new group of investors, further fueling its aggressive expansion efforts. The brand is leveraging the investment to enter 10 more states in the next few years. At the time, the Texas-based fast casual had 83 stores across Texas, Oklahoma, Colorado, Arkansas, Louisiana, Missouri, and Kansas, with an AUV of $3.8 million.

The brand has since eclipsed 100 stores, and is looking for more. In January 2020, Hart said Torchy's wanted to reach at least 160 stores in the next three years.

In March 2021, Bloomberg reported Torchy's was moving forward with plans for an IPO. The chain was reportedly working with Morgan Stanley, Bank of America Corp, and JPMorgan Chase & Co. Sources told the media outlet that Torchy’s could raise about $300 million and be valued at about $1 billion.

The chain is currently searching for a new CEO after GJ Hart announced his retirement. Under Hart, Torchy's grew from 45 to 96 locations, including the opening of nearly 30 stores across 2020 and 2021.