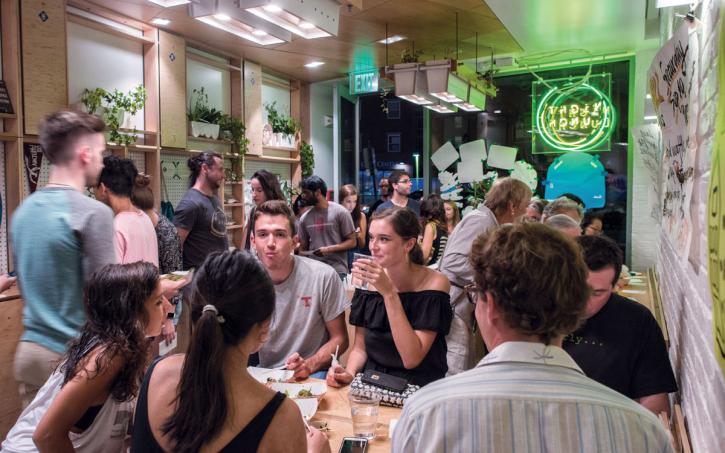 In the last decade’s fast-casual renaissance, New York City has proved a fertile breeding ground for brands that have captured national attention and influenced the entire restaurant industry. With concepts that have elevated standard foodservice options (Shake Shack, Dos Toros, Melt Shop) and those that have redefined responsible eating (Dig Inn, By Chloe, Little Beet) or carved their own niche (Luke’s Lobster), New York’s fast-casual scene is among the best in the nation.

But as those brands have expanded and established roots in cities like Boston, Chicago, Los Angeles, and Washington, D.C.—and many points in between—a new wave of fast-casual innovation has surged in New York. Take a look at these 13 brands that are taking off in the Big Apple and could join the ranks of the nation’s elite. Think we missed someone? Head to our Facebook page to share which New York City fast casuals you think are the next big thing!

(QSR is honoring New York’s fast-casual scene at its third-annual New York Fast Casual Meet Up on April 26. New York–based fast-casual operators can click here for the invitation and to RSVP.) 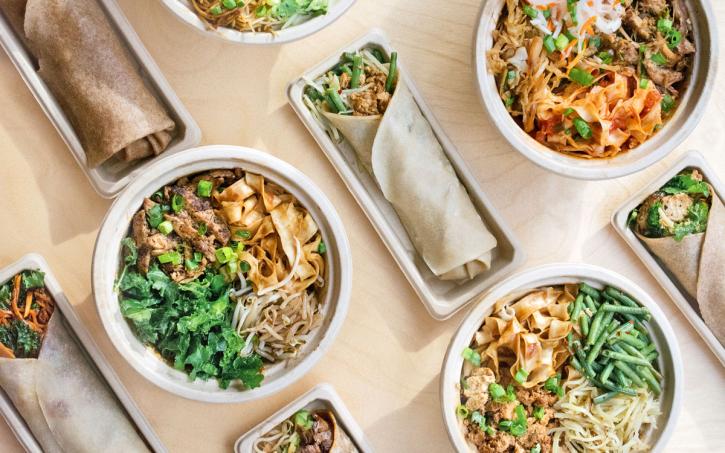 Launched in New Haven, Connecticut, by Yale grads, Junzi Kitchen has planted roots in New York as it seeks to build a following for its North China–inspired noodle bowls and bings (a traditional Chinese food similar to a flatbread). But Junzi isn’t your standard lunch-heavy fast casual; the brand boasts a monthly Chef’s Table dinner series with its executive chef, Lucas Sin, and also rolls out an after-hours menu from 10:30 p.m. to 1:30 a.m. on Fridays and Saturdays with special food and drinks inspired by Asian street food. 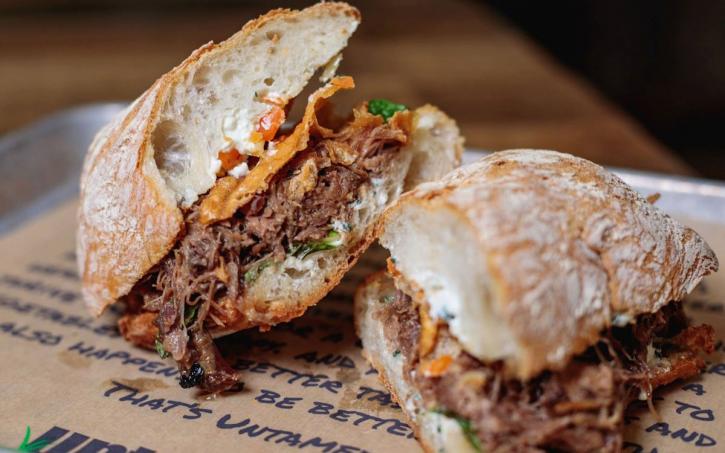 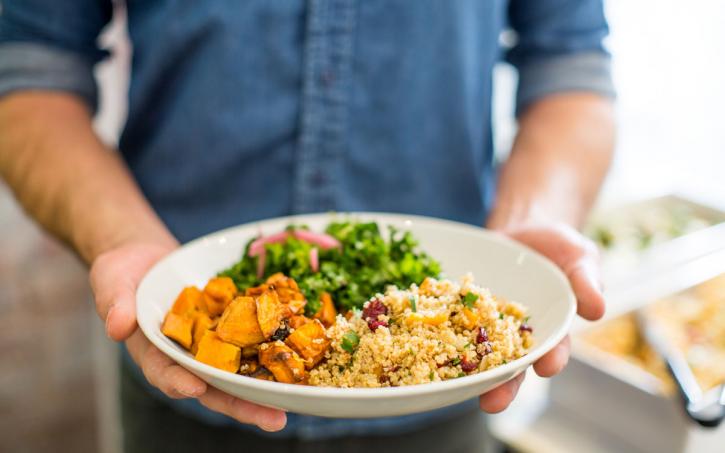 Clean food is the star at Mulberry & Vine, which serves globally inspired bowls and plates. Guests can customize their dish, picking two from among 12 sides (including Thai chili noodles, fennel white bean salad, and charred avocado), a base (brown rice or vegan mash), and one of six proteins (including Mediterranean braised chicken and sesame scallion tofu). Or you can order a house-designed option, like the Sweet Life with kale, apples, sweet potatoes, celery-date salad, curry coconut crunch, and turmeric honey Dijon over organic romaine. 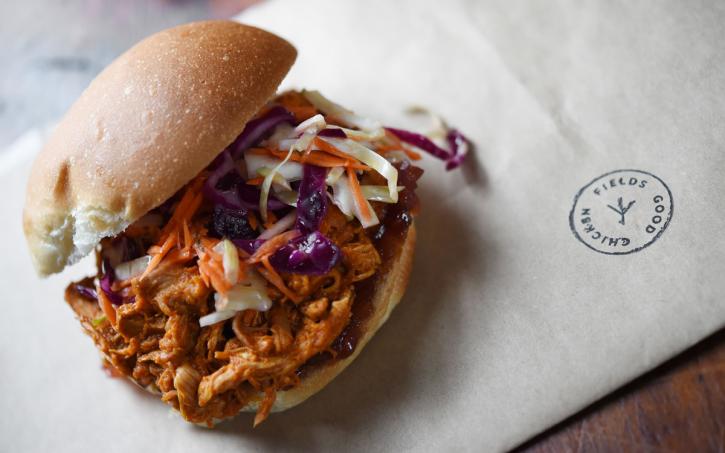 As a sister brand to The Melt Shop and Little Beet under the Aurify Brands umbrella, Fields Good Chicken comes from a good flock. Founder Field Failing launched the concept when his professional cycling career ended and he wanted to start his own restaurant serving high-quality, wholesome chicken. The brand sources FreeBird chicken, which is humanely raised, vegetarian-fed, antibiotic- and hormone-free, and locally sourced from family farms in Pennsylvania. Guests can order the chicken in salads or bowls, or can go with a quarter, half, or whole bird with sides for the family. 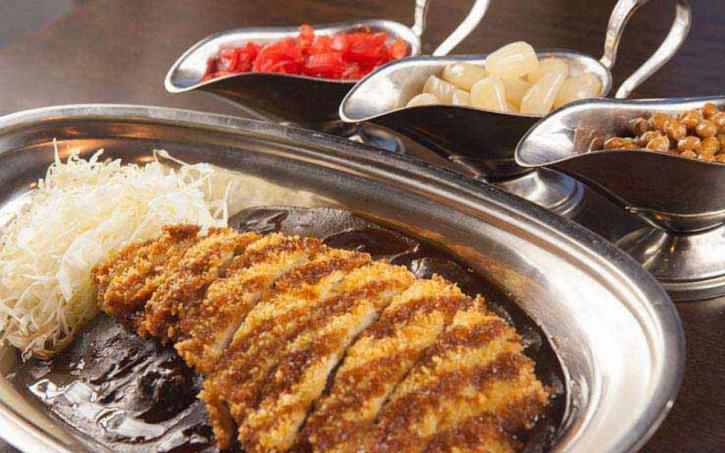 Americans typically associate curry with India or Thailand, but Japan? Indeed, Japan has a thriving curry scene, and that popular comfort food is the core of Go! Go! Curry’s menu. The brand first launched in Japan (“go” is the pronunciation of the number five in Japanese; the restaurant’s name was inspired by baseball player Hideki Matsui, who wore jersey number 55) and has 75 locations there. Led by CEO Tomoko Omori, Go Go Curry USA has six locations in New York and one in Cambridge, Massachusetts, offering customers a range of signature curries or the ability to build their own. 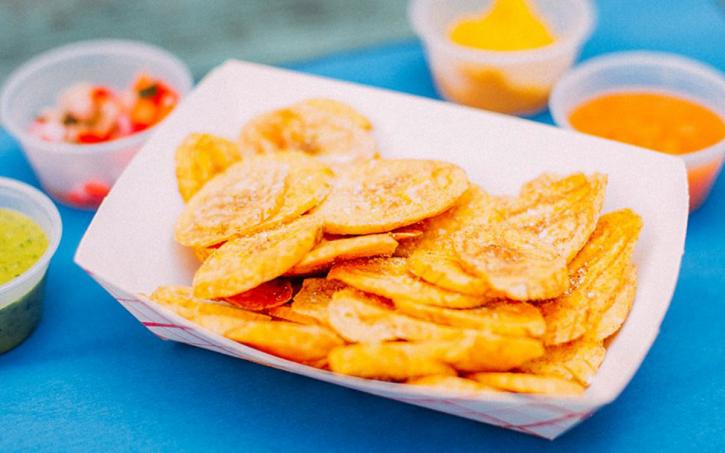 LoLo’s website boasts that it’s “where the Caribbean meets Cape Cod,” and indeed the restaurant boasts a sunny vibe and an impressive range of seafood dishes, like seafood boils with shrimp, snow crab legs, or crawfish, or shareables like crabby dip or Belizean conch fritters. There’s even a Beach Bar on site for those who really want to disappear into a beach-vacation fantasy. 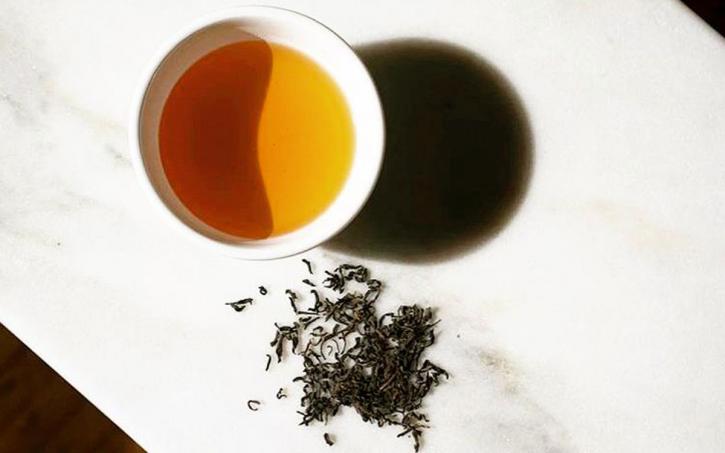 Pairing classic flavors with the sleek atmosphere of a fast-casual restaurant, Inday offers a modern and accessible entry into Indian food. Guests can build their own bowl or choose from among several signature bowls, like the Chicken + Rice with chicken thigh, basmati rice, slaw, tomatoes, coconut tahini, citrus hot sauce, and crispy shallots, or the Cauli’fornia with cauliflower “rice,” baked falafel, supergreens, beets, coconut chutney, cucumbers, coconut tahini, and seeds. 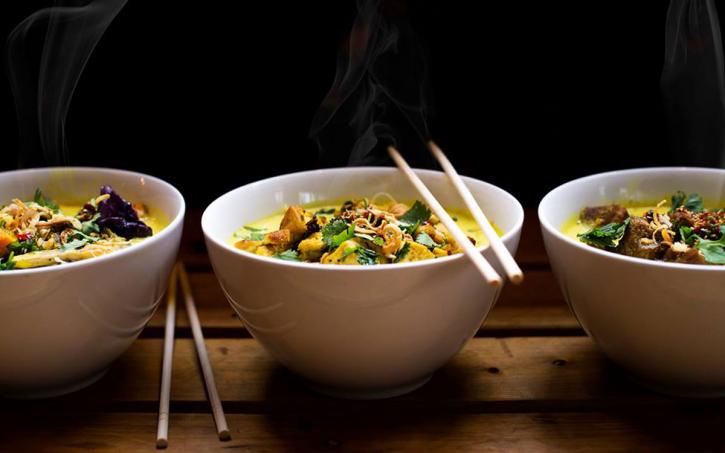 Founder Mark Sy, who grew up in Hong Kong and the Philippines, opened Viên in 2013 after he moved to New York and grew tired of the lunch options available in the city. Viên’s menu pairs the spicy, tangy, salty, and sweet flavors well known in Southeast Asia, with the restaurant’s tagline (“Light. Fresh. Asian.”) noting its tendency toward the less indulgent side of Asian cuisine. Guests can build their own dish, choosing from among six “mains” (including grilled lemongrass chicken or seared turmeric tofu), five sauces (like Vietnamese lime and ginger herb), and several garnishes, all of which is served on one of five bases, including bánh mì or chilled rice noodles. 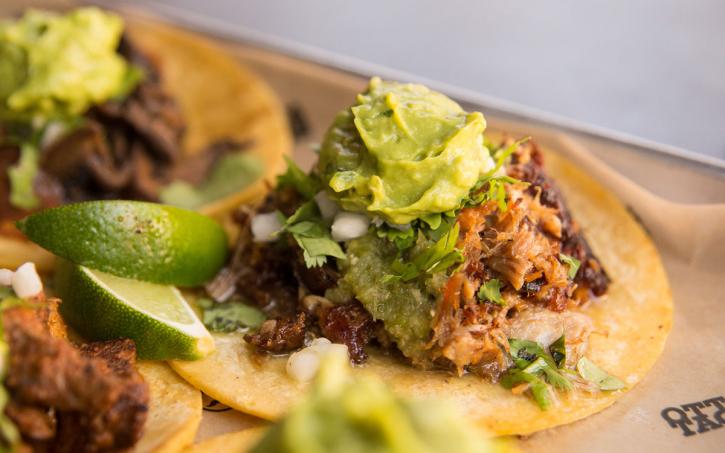 Otto’s Tacos strives for California flavor in its tacos, as founder Otto Cedeno says his goal was to “capture the nostalgia of flavors of home,” namely the small taquerias around his native Southern California. Otto’s Tacos menu can “get a little weird sometimes,” Cedeno says, featuring everything from buffalo chicken tacos to eggplant parmesan tacos. But the core menu also includes staples like chicken, carnitas, and carne asada tacos. 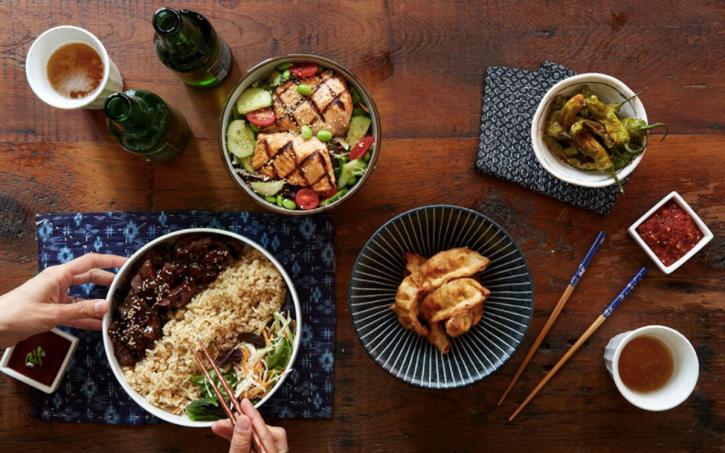 Seattle native Paul Krug opened Glaze in 2010, inspired by the teriyaki shops he grew up around in the Pacific Northwest. The brand now has four locations in New York, as well as two in San Francisco and one each in Chicago and Madison, Wisconsin, all of them focusing on a modernized Seattle-style teriyaki with house-made sauces and grilled-to-order proteins. The menu includes standards like chicken breast, chicken thigh, and steak over rice, but also innovates with Ora King salmon, crispy gyoza dumplings, and a cold soba noodle salad. Glaze is in the midst of a brand refresh, as it’s moving its flagship New York location into a new, bigger space that features a sauce bar; revamping the store design to have a more contemporary, clean, and bright aesthetic; and updating the menu with new proteins, healthier ingredients, and more seasonal produce. 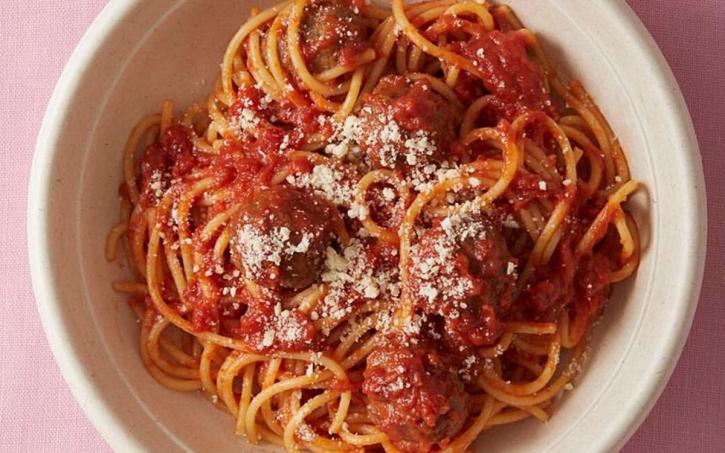 Pasta has yet to take off in the fast-casual arena, but chef Mark Ladner hopes to change that at his new shop, Pasta Flyer. Ladner, who made a name for himself as chef at renowned restaurant Del Posto, says he wants to make classic Italian cuisine accessible in a more affordable and convenient setting, and Pasta Flyer offers that with high-quality pasta bowls at a $7–$9 price point. The menu is straightforward, with five pasta varieties—fusilli, fettuccine, whole-grain rigatoni, spaghetti, and gluten-free penne—matched with signature sauces, all of which can be mixed and matched at the customer’s request. There are also five sides—salad, spicy broccoli rabe, fried cauliflower, baked eggplant parmigiano, and garlic dots—along with beer, wine, and other beverages. 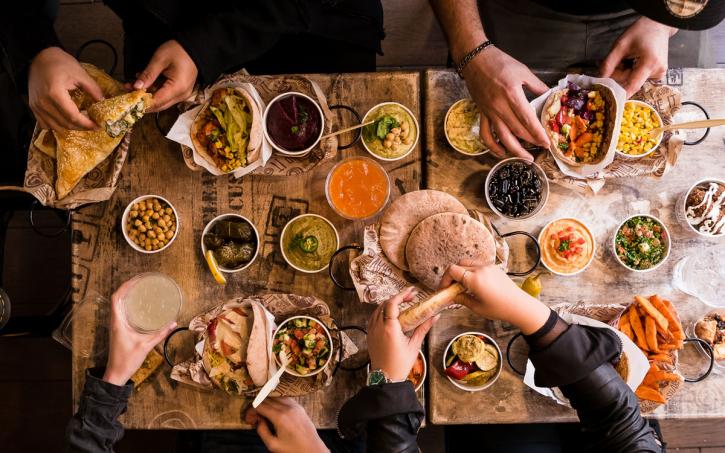 The Mediterranean fast casual category is exploding across the U.S., and The Hummus & Pita Co. hopes to be among the leaders. The franchised brand recently announced planned expansion into Los Angeles, and also has locations in development in Colorado, New Jersey, Connecticut, and Michigan. The Hummus & Pita Co. dishes pitas, laffas, bowls, and platters, with guests choosing from proteins like falafel, shawarma, and gyro and a wide range of toppings. Then, of course, there’s the hummus, of which there are even dessert varieties: chocolate, cookie dough, and cake batter. 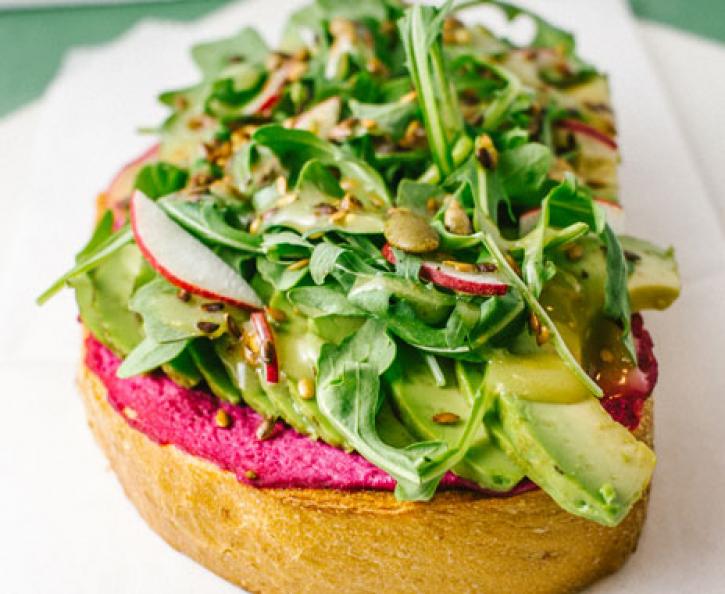 Can a restaurant focused almost entirely on avocados thrive in today’s marketplace? As Avocaderia has discovered, it sure can. What started as a food-hall concept in Brooklyn’s Industry City, the “world’s first avocado bar” announced plans to expand to Chelsea’s Terminal Warehouse, with further expansion possible after that. The menu boasts avocado-based toasts, salads, bowls, and smoothies, as well as dishes like the Avo Burger with avocado, smoked salmon, herb yogurt, watermelon radish, arugula, black sesame seeds, and lime citronette.