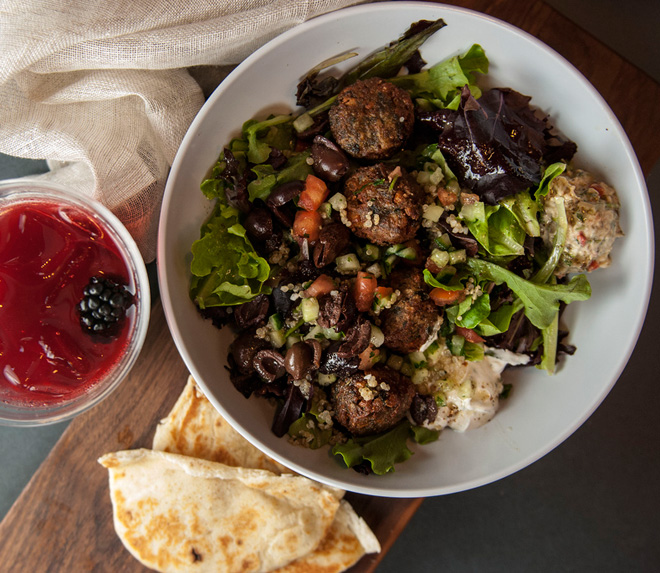 In the wake of Chipotle’s phenomenal growth, much has been made about the customization model that has been the driving force to the fast-casual industry, not to mention the incredible interest in authentic ethnic food that has spread across the country. And in some ways, Cava Grill fits perfectly into that model; the concept that is a spin-off of D.C.’s full-service Cava Mezze restaurant lets customers walk down an assembly line filled with fresh ingredients, building their own bowl of authentic Mediterranean flavors.

But Cava also has its own distinct flair; you get a sense of it when you walk into the restaurants, see the map of all the farm partners, pick up a paper menu laying out the many dips, proteins, toppings, and dressings. It’s there, too, when you walk through the line with Brett Schulman, the former Wall Street banker who is now Cava’s CEO, and watch as he greets the employees by name, compliments them on their service, asks how things have been.

“We’re never going to be what [Chipotle] is; we’re not the same price, we’re not the same cuisine,” Schulman says of the Chipotle comparisons as he digs into a stuffed bowl in an upstairs corner of the fast casual’s Chinatown location. “We’re not as familiar as Mexican, Asian, or Italian cuisine, so [Chipotle] is a nice frame of reference for people, a sort of ‘Cava for Dummies,’ so they know what to expect if they don’t know when they come in. But at the same time, we want to express our culinary [style], our ethos, our food quality.”

Those things all contribute to a Cava culture that is present throughout a visit to the restaurant. Schulman points to the brand’s open kitchens, stylized menuboards, wine and beer on tap, kids’ menu, and full-service roots as being key differentiators. But there’s also the lifestyle the executive team promotes among its employees—one that operates much like a family and encourages “creative thinkers,” as Schulman says—and the fact that the company is constantly looking to enhance its ingredients and food quality.

Schulman says the team at Cava is motivated by the fact that business is very diverse—there’s young, there’s old; there are men, there are women. There are families, office workers, folks of many different ethnicities. “Palates are expanding, and people are getting more adventurous; people are eating spicier foods at a younger age,” he says. “They’re seeking the next frontier of food. We think we can be that option for them.”

That next frontier is now expanding beyond the D.C. market; after opening its first 12 locations in the capital, Cava—with more than $60 million in funding from investor partners—opened two locations in California in 2015 and has plans for further national growth. Its growth model closely mirrors other Fast Casual 2.0 brands, including others from its hometown market.

“We get a lot of overlap with Sweetgreen where customers will go to Sweetgreen and get a salad on a Monday and go to Cava and get a bowl on Thursday,” Schulman says. “That’s all a win. When you’re among like-minded brands, I think you can create some great energy and critical mass to just be a center of gravity.”

Can Papa John’s Be as Big as Domino’s?
Listen to QSR Uncut Episode 2: Is the Virtual Restaurant Bubble About to Burst?
Double Down on Digital: How Restaurant Brands are Planning for the Future

800 Degrees, Pizza Robots, and the Future of Innovative Growth
How to Adapt Your Franchise Model to a Post-COVID World
BurgerFi to Purchase Anthony's Coal Fired Pizza & Wings for $161.3 Million