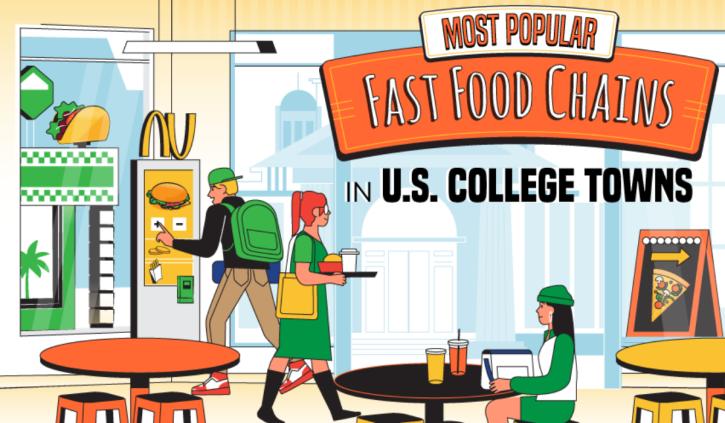 From sharing slices of pizza in dorm rooms to 2 a.m. Taco Bell runs, it's no secret college students love fast food. Though Gen Z consumers in college towns have more choices than ever, a few notable trends are emerging, such as an increasing preference for healthier options and brands that boast sustainable practices.

To determine which fast food spots are the most popular among college students, Yelp teamed up with BrokeScholar to analyze data for quick-serve chains within a two-mile radius of 144 of the country's public universities.

And the eatery with the most votes was... 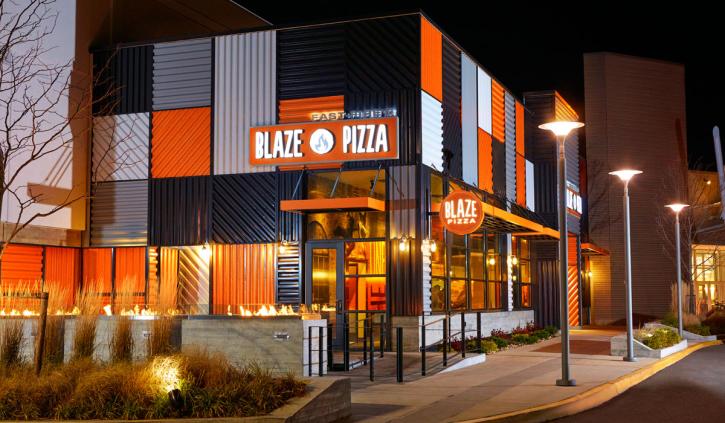 As one of the largest fast-casual pizza chains in the U.S. with more than 330 locations, Blaze Pizza ranked as the number one student pick across 20 college campuses, including Arizona State, Rutgers University-Newark, Iowa State, Texas A&M, University of Florida, and UCLA.

Students listed the brand's responsibly-sourced ingredients and eco-friendly packaging as important factors, as well as its plethora of options to accommodate different diets, from gluten-free and cauliflower crusts to vegan options. Blaze also has some of the highest ratings nationally, with seven locations scoring 4.5 out of 5 stars on Yelp.

The brand added a net of 18 restaurants between 2019 and 2021, and in October, announced a 10-unit deal to grow in Dallas-Forth Worth and a three-store agreement in Prince George County outside of Washington, D.C. Blaze Pizza also recently hired former Focus Brands executive Beto Guajardo as its new CEO, replacing Mandy Shaw who stepped down in November. 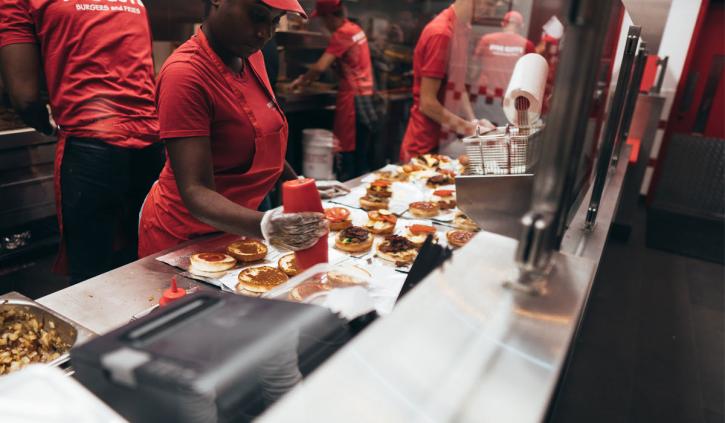 A classic meal of burgers and French fries isn't going out of style anytime soon. Coming in second, college students picked Five Guys as their favorite fast food chain at 19 public schools, including University of South Carolina, University of Virginia, Penn State, and Texas Tech, to name a few. 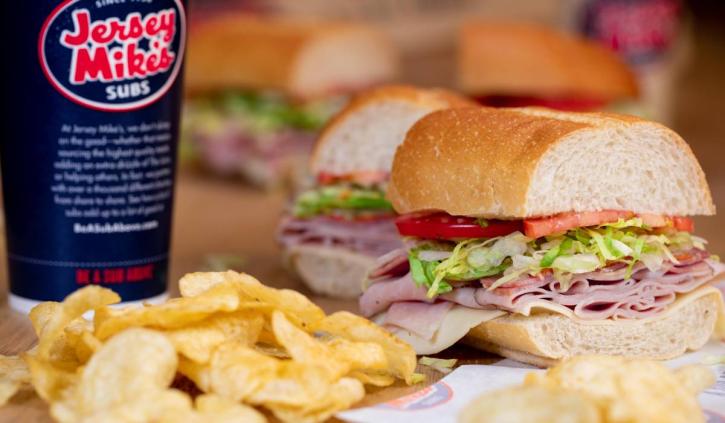 Jersey Mike's opened nearly 250 stores in 2021, continuing its takeover of college towns across the country by ending the year with 2,100 total locations. 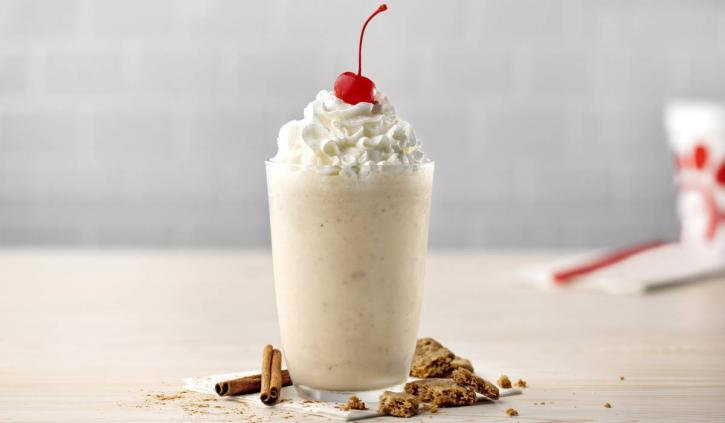 No. 4: A tie between Chick-fil-A and Jimmy John's

Students at 11 universities on the list ranked Chick-fil-A as their go-to spot to grab grub in between lectures, while another 11 schools picked Jimmy John's. The sandwich chain has more than 2,700 locations across the country, just shy of Chick-fil-A's 2,900 store count.

While sandwiches are clear winners for college students across the country, national chicken chains are particularly popular in the southern U.S., taking seven top ratings.

Let's take a look at how fast food chains ranked by region: 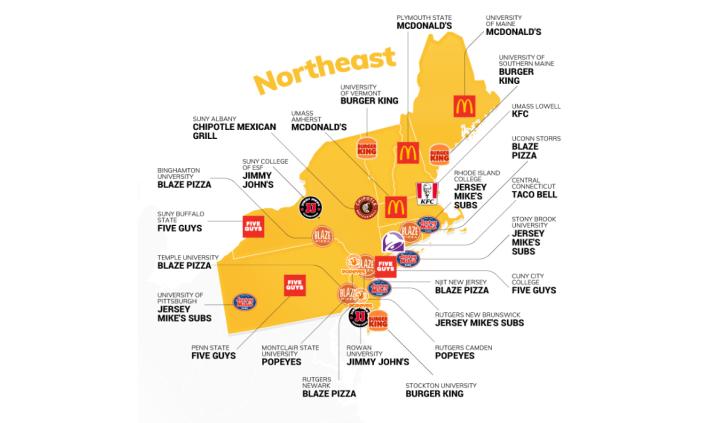 Blaze Pizza was the most popular restaurant in the Northeast U.S. within two miles of each state's top public universities, even beating Jersey Mike's at New Jersey Institute of Technology. 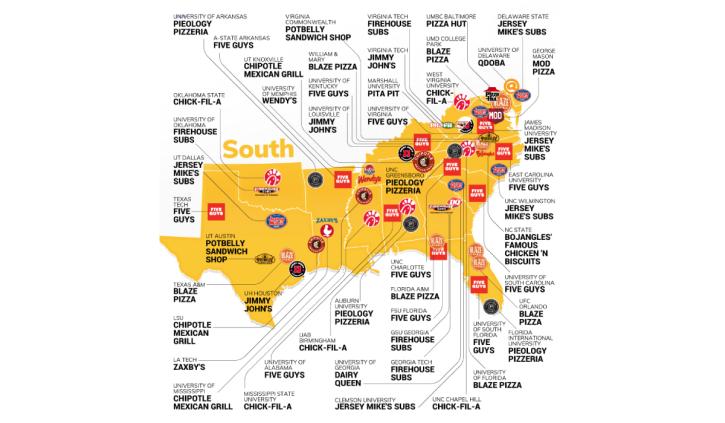 Fifteen out of the 49 colleges in the Southern U.S. picked sandwich chains as their favorite fast food spot, more than any other category. Five of those schools chose Jersey Mike's.

North Carolina State notably chose Bojangles' Famous Chicken 'N Biscuits—showcasing a growing trend for preferring regional and local chains. Bojangles was founded by Jack Fulk in Charlotte in 1977, and has grown to nearly 800 locations across the country. 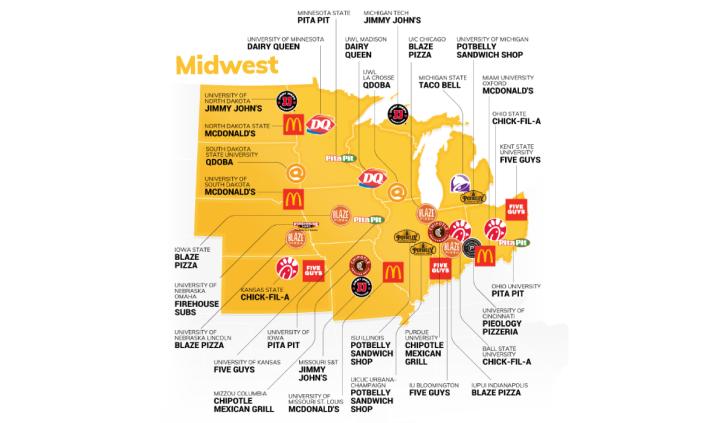 The Midwest doesn't have a clear winner, though Blaze Pizza and McDonald's are the top favorites at four schools each. Meanwhile, students at 10 of the region's 32 colleges gave their highest reviews to sandwich shops. Three schools picked Jimmy John's, three voted for Potbelly, while three others voted for Pita Pit. 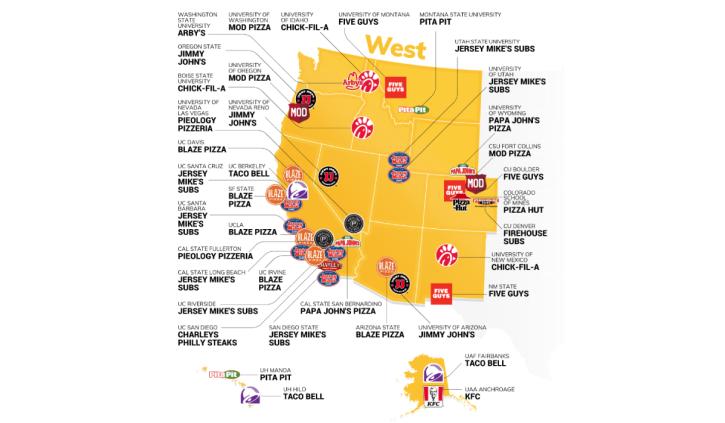 Sandwiches take the cake at 15 out of the 39 western-region universities, with Jersey Mike's topping the list.

For more, check out this interactive table of the study's findings.