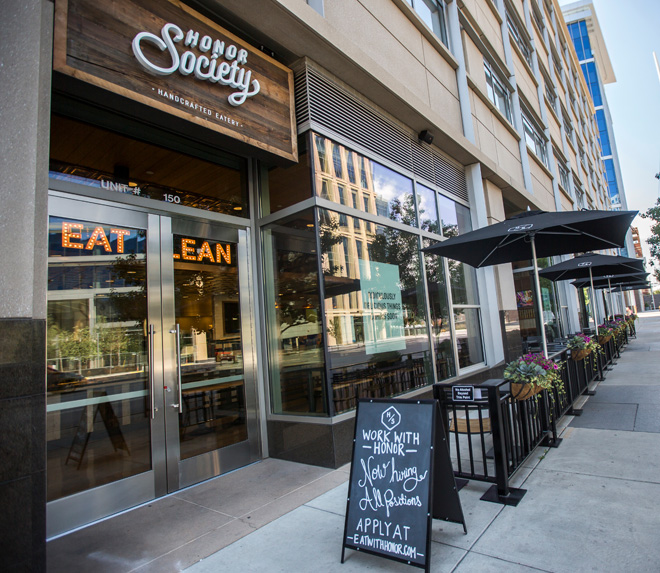 Denver is the cradle of the original fast-casual category and birthplace to Chipotle itself. Now it’s home to a team of restaurant veterans—a fine-dining chef and Yum! Brands franchisee among them—who hope to pioneer the Fast Casual 2.0 movement in the city.

Business partners Jonas Tempel, Rob Alvarado, Ian Smith, Justin Brunson, and Ben Kaplan opened Honor Society this summer as a destination for breakfast, lunch, happy hour, or dinner. The Fast Casual 2.0 restaurant has an expansive menu designed by Brunson, a renowned Denver chef who owns popular fine-dining restaurant Old Major and the two-unit local quick serve Masterpiece Delicatessen. The menu includes entrées like short rib, cedar plank salmon, and fried chicken, which can be served in a salad, on a plate, or in a sandwich. There are also pizzas, soups, and breakfast items, as well as a high-quality kids’ menu.

Honor Society also features a full bar, with wines and local beers on tap, as well as house-made cocktails and “clean” cocktails, which are healthier alcoholic beverages.

Alvarado, CEO of Yum franchisee Palo Alto Inc./Alvarado Concepts LLC, says he and his team wanted to add some “finer touches” to the traditional fast-casual model.

“It’s little things such as runners who actually take your food out to you, more linens and actual china plating and real silverware, things like that,” he says. “We do things such as making most of our food in-house. … We offer craft beers on tap, wines on tap, but we also have what we call our clean cocktail program, these healthier takes on cocktails, on tap. So it’s really a step above what you would find in a traditional fast-casual restaurant and more reminiscent of a true full-service restaurant.”

As Honor Society is just a few months old, the owners don’t have an idea for just what they might accomplish with the restaurant, Alvarado says, but he adds that they built its systems “with growth in mind.” Like other Fast Casual 2.0 operators, the Honor Society team understands that an elevated fast-casual experience has the potential to kick open plenty of doors with the restaurant-crazed public.

“Just how fast casual came in and played its role there, I think this is the next level, where restaurants can play for even a different demographic who maybe before were only visiting casual restaurants,” he says. “I think this will appeal to folks who want that same quality food but want to access it more frequently at a more affordable price point.”