How Some Operators are Striving for Better Sustainability Standards 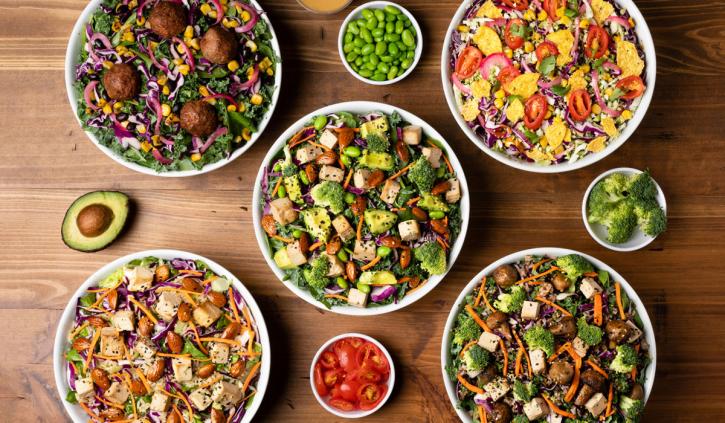 With respect to technology, the pandemic jumpstarted the industry’s innovation cycle. But there were certain movements left neglected. Sustainability chief among them. For many companies, climate-friendly initiatives turned to the wayside as disposable, single-use materials became the norm. It was both an additional way to protect against the virus and a result of higher off-premises volume.

Nearly two years later, where does that leave restaurants? QSR caught up with four leaders in the space. 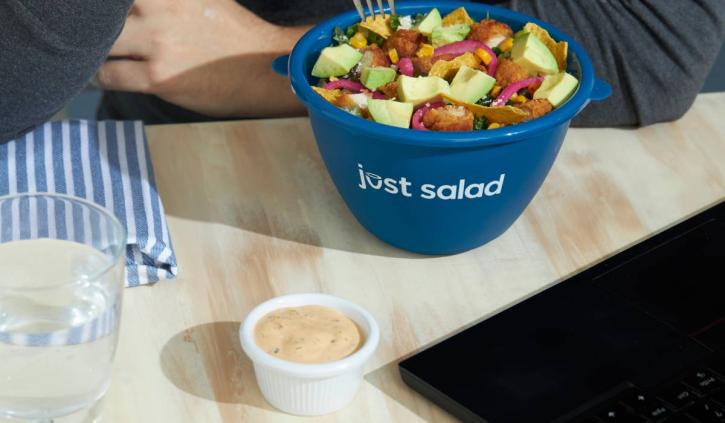 When Just Salad was founded in 2006, co-founder and CEO Nick Kenner was alarmed by the prevalence of plastic salad bowls in the industry. Just Salad’s solution was to launch a reusable bowl program that became the emblem of the brand. Since, the scale of the plastic- and single-use pollution crisis and its public awareness has become much greater.

Just Salad worked to take as much single-use plastic out of its supply chain as possible while creating more compostable materials. The brand joined the bandwagon by enabling customers to opt out of plastic utensils every time they order.

But COVID jolted some of Just Salad’s sustainability programs temporarily out of operation. Seemingly overnight, in New York City, the chain had to shutter its indoor dining for a period of months and could no longer accept reusable bowls on-premises.

As more research revealed that COVID spread via touch was not a primary mode of transmission, however, a panel of scientists, doctors, and academics vouched for the safety of reusable packaging in a joint statement, says Sandra Noonan, Just Salad’s chief sustainability officer.

“That was a seminal moment to see that statement,” Noonan says. “I think it has provided operators and the growing reuse movement with just that extra level of confidence—or third-party validation—that reuse can be done just as safely or even more safely than disposable.”

“I think when you're achieving that triple whammy of great taste, healthy and honest, good for the planet, that is magic for a certain type of customer,” Noonan says. 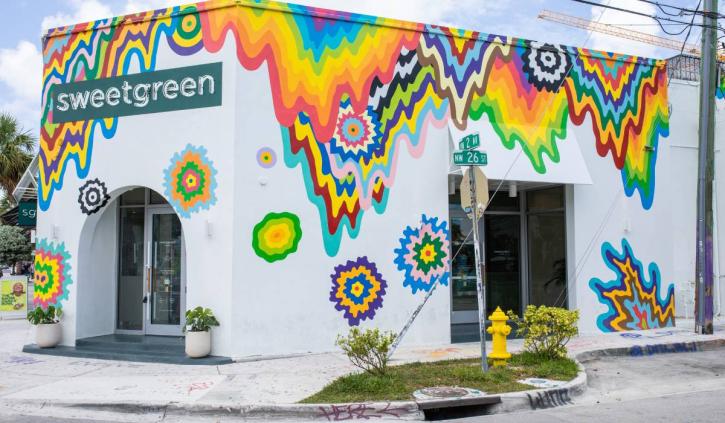 Sweetgreen was founded on locally sourced, organic supply chain principles from the outset. Packaging has been compostable for years now. The brand works with farmers employing regenerative practices and calculates a carbon footprint for each menu item while continually looking for additional areas of improvement.

Sweetgreen eliminated PFAS in most packaging as well. (PFAS are known as “forever chemicals” that are used in many packaging and have been linked to cancer and other negative health impacts).

Still, when COVID occurred, there was an undeniable hit to some core practices. Sweetgreen had to pause its reusable cutlery tests in stores and also pause reusable bowls. The total PFAS-free move was delayed (everything but sweetgreen’s plates are currently PFAS-free).

Food safety was sweetgreen’s priority, and during a pandemic of this size and magnitude, the brand wasn’t going to take chances, says sweetgreen’s VP of Supply Chain and Sustainability Kevin Quandt. It’s just a matter of getting back on track.

Even though some programs across the industry had to be suspended, Quandt believes consumers are more interested than ever in connecting food decisions and purchases with their greater impact on the planet. Consumers are looking for packaging that is more sustainable and just as convenient.

All of this ties into sweetgreen’s decision this year to start building a plan to become carbon neutral by 2027, which would involve reducing its carbon by 50 percent.

“It's pretty complex,” Quandt says. “It's not just one thing, and you're done. It permeates the entire organization. What I really love about the sweetgreen team is that it's very approachable to go to any stakeholder in the company and say, ‘Hey, we've got this goal. We need you to be a part of it. We don't necessarily have the blueprint or answer. But let's work together to make progress.’” 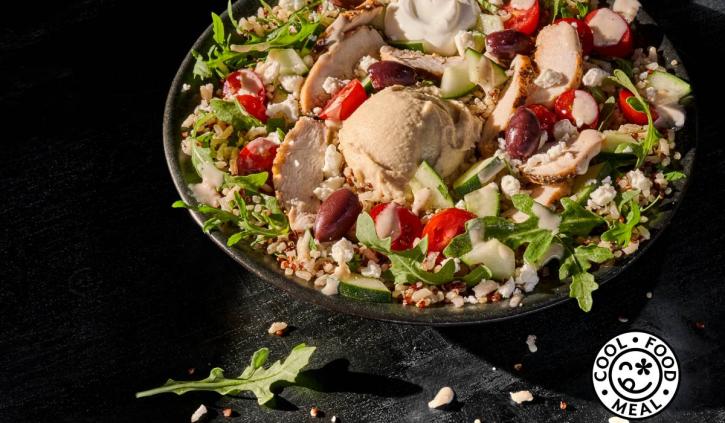 Perhaps the buzziest announcement to hit the sustainability beat came this fall when Panera Bread said it was the first national fast casual to commit itself to being climate positive. Panera Bread will adapt operations to become climate positive, or take out more carbon than it emits, by 2050.

Initiatives to reach interim 2025 goals include increasing the percentage of Cool Food Meals, or those that have a low impact on the climate as certified by the World Resources Institute, to 60 percent of bakery-cafe entrees. Panera will also transition to 100 percent circular, reusable, and compostable packaging and use green, renewable energy for at least 50 percent of owned operations by 2025, the company said.

While other brands sometimes lost reach of certain sustainable practices, VP of Food Beliefs and Sustainability Sara Burnett says Panera maintained its standards across the supply chain. However, with more orders to go, the company had to use more off-premises packaging than ever. In turn, Panera replaced sandwich boxes with a compostable thermal wrap, reducing the amount of material by 60 percent.

Burnett says Panera has always prioritized maintaining food quality and food safety, and throughout the pandemic, the brand just looked for more ways to reduce impact alongside the demand for off-premises packaging. Changes like moving from a threefold to a twofold napkin, which seemed small, had significant impacts without causing customer issues.

“We had to continue to innovate to try to prioritize sustainability, even though we had these headwinds of increased packaging,” Burnett says. “That's just why it's so critical. We don't see that off-premises is going to completely revert to pre-COVID numbers. So we have to keep innovating. We have to keep using less material, using the right types of material, when we think about designing new packaging.” 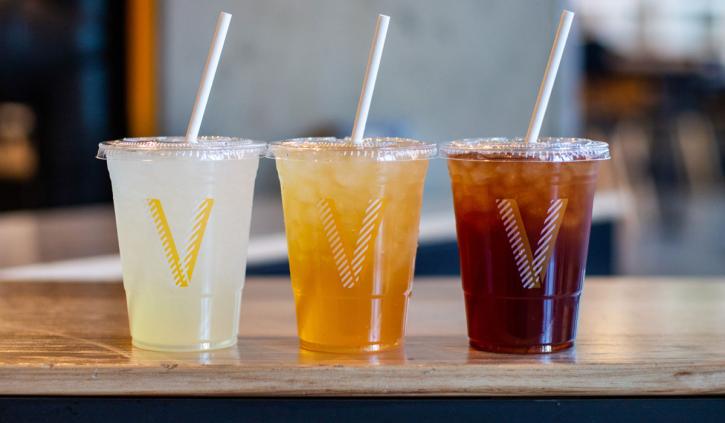 CAVA is another brand that has always viewed sustainability as a priority, says Brett Schulman, CAVA’s co-founder and CEO. Pre-pandemic, the fast casual had great success with reusable bowls available for dine-in, as well as compostable to-go bowls and recyclable lids. CAVA eliminated all plastic wrap in its food prep processes and cut plastic straws, and the brand is also working on eliminating added PFAS from all foodservice packaging by Q1 of 2022.

Suffice to say, CAVA had been thinking about its sustainability practices in depth for a while. CAVA also partners with Open Water, which sells sparkling and still water in BPA-free aluminum packaging that is recyclable. Some CAVA dressings use aquafaba, a byproduct created during the hummus making process, as an ingredient to make CAVA’s recipe creamier, and chicken, lamb, and beef are antibiotic free with no additives.

When COVID hit, CAVA, too, had to remove its reusable bowls from the in-restaurant experience and didn’t add them back until spring of 2021. But CAVA’s manufacturing facility in Laurel, Maryland, brought on organic waste and single-use plastic reduction programs, resulting in fewer gallons of wastewater in local water streams (178,000 gallons a year) and hundreds less single use containers thrown out.

“While most consumers are willing to try more sustainable packaging and recognize that there is a bigger problem to solve with plastics, food waste and limited access to recycling/composting infrastructure, they are not always willing to change routines or sacrifice convenience or price for a different bowl, cup, lid or straw,” Schulman says. “At CAVA, we try to offer ‘for here ware’ at every restaurant as the default for dine-in guests at no cost to them. We want to show consumers that sustainable behavior can be the norm, easy, enjoyable and cost less.” 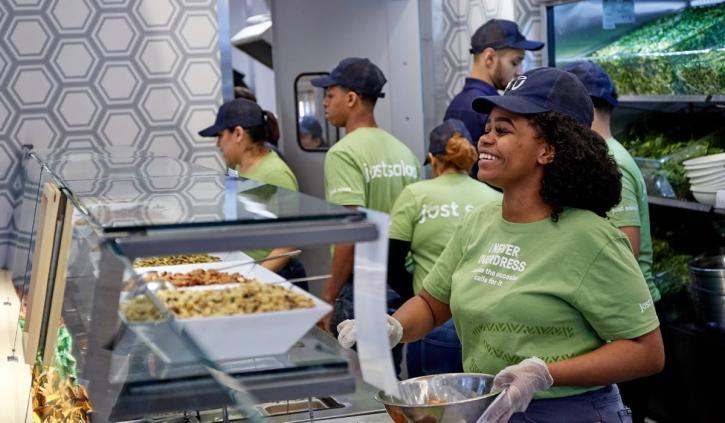 Ultimately, Schulman says there are challenges and opportunities related to single-use packaging trends that increased during the pandemic. The opportunity lies in the fact that reusables can support a world experiencing severe supply chain shortages, Schulman says.

Consumers want choice and ease, Schulman says. The pandemic as changed many behaviors, including where and how consumers get their food. Yet it’s also given diners a closer look at the amount of waste generated by packaging.

As sweetgreen takes smaller steps toward its goal of carbon neutrality by 2027, the company says it recognizes food decisions create some of the biggest impacts on the climate crisis.

“Because agricultural practices are so impactful to where the carbon emissions are coming from, we should all be more mindful of our decisions related to food and its impact on climate,” Quandt says. “So restaurants, or anybody in the foodservice space should start to think about their impact and how to mitigate some of the emissions that are happening.”

Consumer concerns will guide restaurants toward these goals, granted public and consumer priorities are on a seemingly never-ending shift. The pandemic reflected this. Schulman says CAVA saw a slow-down in non-single use options and a greater focus on racial justice, health inequities and labor, and job rights. Still, sustainability was not forgotten, and it likely won’t be as the climate crisis continues.

“For many, the pandemic was also a period when many consumers began thinking about how things could be different, including how we interact with our environment and how much waste we generate,” Schulman says. “We believe waste will continue to be a long-term, top-of-mind issue because of major environmental worries. Waste is often the most tangible to the consumer—it’s what they see every day when they leave a store with their food or beverage.”

When even a mega brand like McDonald’s is investing in a plant-based burger, it’s clear sustainability is fast becoming mainstream, Noonan says.

“Concepts that aren't thinking about sustainability as a leg in the door of the brand might be risking relevance,” Noonan says.