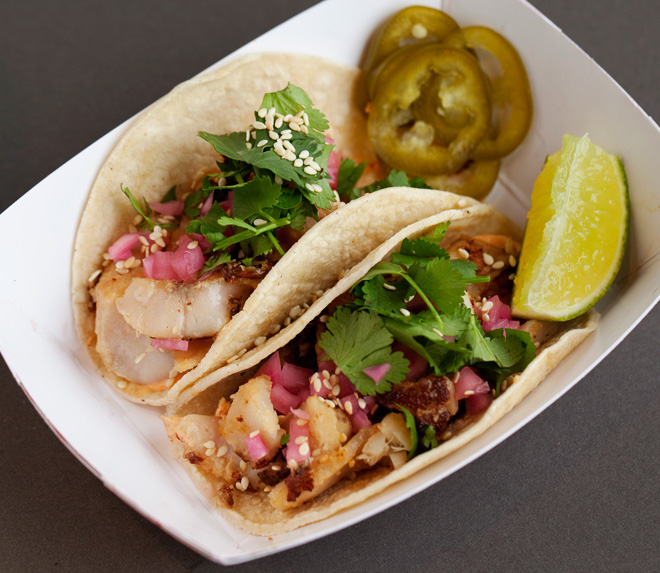 In Seattle, two women with the one-time dream of opening a food truck have suddenly found themselves operators of two—soon to be three—mega-successful counter-service restaurants, each with its own unique flair. Marination, founded by Roz Edison and Kamala Saxton in 2009, first earned fans in Seattle as a roaming food truck slinging Hawaiian-Korean fusion fare like Spicy Pork Tacos, SPAM Sliders, and Kimchi Quesadillas. It then grew to a 600-square-foot brick-and-mortar space that Edison says was essentially a replica of the truck but with a kegerator, and then to a location on the Puget Sound that overlooks downtown Seattle.

“We try to distinguish ourselves from other fast casuals mostly by making everything in-house from scratch, even at mass volume,” Edison says. “‘Everyday Aloha’ is our model, and we love that. All of our order takers are trained to do everything they can possibly do to remember people’s names or faces or at least something about them. Even if they don’t remember any of those things but remember that they’ve seen this person and say, ‘Welcome back, good to see you again’—that’s not very typical in a fast casual like Chipotle.”

This customer service—along with the alcohol on the menu—is an important piece to Marination’s position as an upscale Fast Casual 2.0 concept. Much of the rest of the experience at first blush comes across like a traditional quick serve; menu prices are low, service times are fast, and the food isn’t high-falutin’. “It’s not local—we’re not going that route, which is different than the ‘fine fast’ [industry],” Edison says. “And it’s not a ton of salad, so we’re not saying we’re your first place to go when you’re on a diet. But we’re also not all deep-fried. It’s a good balance.”

Edison and Saxton are also very “hands-on and engaged,” Edison says, maintaining a tight control over the two Marination units, as well as their full-service restaurant, Super Six, which opened this year. The business partners work hard to know all of their employees and get their hands dirty in the kitchen, helping on the line wherever necessary.

That’s why Marination’s growth plans are tempered. After the third brick-and-mortar location opens, Edison and Saxton have no plans to continue building the brand. While Edison says “never say never,” she adds that she and Saxton are content with their small Fast Casual 2.0 operation, even as they receive invitations to expand out into the broader Pacific Northwest region. Growing beyond Seattle means giving up control and not being on the frontlines, Edison says, and that’s not something she and Saxton are interested in.

“You can’t separate Marination from who I am and where I go,” she says. “And for me, that means that it is a huge responsibility to make sure Marination continues to deliver a positive experience for every one of the people I run into.”