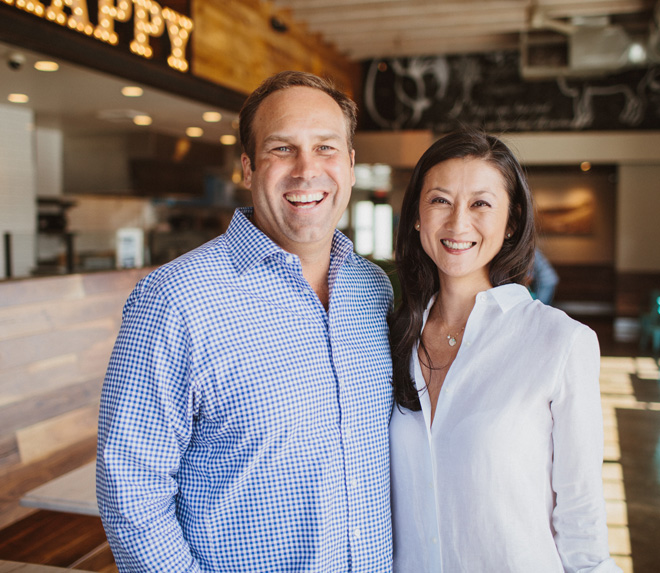 Mario Del Pero, cofounder and CEO of Los Angeles–based sandwich brand Mendocino Farms, operated a fast-casual teriyaki brand with his now-wife Ellen Chen in the late ’90s, before fast casual was even the term to define what they were doing. They sold the brand once it had grown to three locations, and in 2003—when they realized there weren’t enough alternatives to casual-dining brands—they started to develop the idea for Mendocino Farms.

“Since we were such early adopters of what would become fast casual, it gave us a lot of time to really study what worked, what didn’t work,” Del Pero says. “At that time, the only inspiration that people were taking from casual dining was basically the better quality of the ingredients. The format was very identical to fast food. … So when we were creating this concept, we had a little more context because we’d been in it for five years, and we were saying, ‘Can we pull more things from upscale casual?’”

The resulting brand, Mendocino Farms (or Mendo, as it’s affectionately known to staff and customers alike), formally launched in 2005, has grown to 12 locations, averages about $3.4 million per unit, and just welcomed upscale grocer Whole Foods as a minority stakeholder. Del Pero and Chen are quietly building a burgeoning restaurant empire whose tagline is “Eat happy” and in which several of Fast Casual 2.0’s signature traits are perfectly encapsulated.

First, there’s the menu, a “sandwich market” rife with locally sourced goods; there’s a Peruvian Steak Sandwich, a Kurobuta Pork Belly Banh Mi, a Vegan Dosa. But Mendo is also busy creating a restaurant experience that Del Pero says strives to make the restaurants a gathering place for their communities. It trains its employees to take customers’ orders as they’re waiting in line and then run the food out once it’s ready to go. Each Mendo is designed by the same in-house architect but different interior designers, giving the stores a sense of unity as well as independent character. Fine-dining chefs regularly visit the brand for days at a time, working with its culinary team—made up of trained chefs, many of whom carry full-service experience—to develop new menu items. There are communal tables, cornhole courts, fooseball, beer and wine.

Del Pero cites the convergence of three consumer trends from the last decade and a half for Fast Casual 2.0’s conception. First, he says, was the rise in popularity of grocery brands like Whole Foods, which educated Americans on local ingredients and wholesome eating. Second was the popularity of food TV, which further educated customers and got them excited about ingredients and recipes they’d never even heard of before.

The third trend, he says, was the food-truck boom. While the trend has, in many cities, come and gone, Del Pero says the timing of food trucks’ popularity, especially in Los Angeles—ground zero for the truck trend and home to the movement’s godfather, Roy Choi—is not to be underappreciated. Thriving at the peak of the recession, food trucks presented a creative outlet to educated people who were suddenly unemployed. “You had a lot of these specialized foods that were done by people who were unbelievably thoughtful and great students of trying to understand how to be successful,” he says. At the height of the food-truck trend, he adds, several trucks parked outside a Mendocino Farms location during peak hours—and he welcomed it. “All ships rise with high tides. It’s been one of the greatest movements.”

Mendocino Farms is preparing for growth, though Del Pero still isn’t certain whether that growth will be regional or national. The trick, he says, is growing the infrastructure—the suppliers, the partners, the hospitality-training program—along with the brand. “One of the three things we’re fighting in ‘fine fast’ is, the minute you start trying to scale, you start watering down the food, you start cheapening the dining rooms, and your hospitality goes out the window,” Del Pero says. “So we’re fighting those three things.”

The recent investment from Whole Foods shouldn’t hurt. The grocer, which Del Pero cites repeatedly as an inspiration to Mendo (our interview was conducted before news of the investment broke), became a minority stakeholder and will help the sandwich brand expand to San Francisco and San Diego. It also plans to open Mendo within some of its Whole Foods locations.

Similar to so many other Fast Casual 2.0 brands, franchising isn’t in the cards, and Del Pero suggests the elevated level of service and culinary expertise in Fast Casual 2.0 isn’t something that can be easily packaged in a franchise model. “All of these places are doing pretty chef-driven menus, and any time you have that level of complexity, you better have [franchisees with] 50-plus units under their belt,” he says. “And if you’re thinking of franchising, it better be in area development deals with someone who already owns casual-dining chains—not fast-food places.”

Contactless Ordering, and Other Tips to Navigate COVID-19
One Key Strategy for Life After Coronavirus
Navigating Unprecedented Times: 5 Ways to Boost Your Restaurant’s Mobile App

Trying to Picture Life for Restaurants After COVID-19
The First 22 Days of March: Restaurants Have Lost $25 Billion
The Rush Away From Restaurants Continues