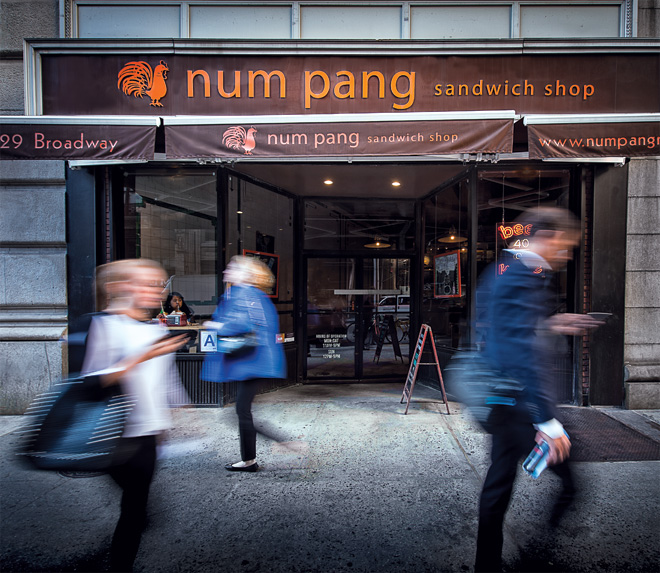 Ratha Chaupoly and Ben Daitz first opened New York’s Num Pang, the Cambodian sandwich joint, in 2009 as a spinoff of Kampuchea, a fine-dining restaurant Chaupoly opened in 2006. That restaurant—one of the first Cambodian-inspired concepts in New York, inspired by Chaupoly’s heritage—had num pangs (loosely translates to “sandwich”) on the menu that became so popular the business partners and college buddies figured they could operate a separate concept around them.

They were right. The first location—squeezed into a 250-square-food space near New York’s Union Square—was such a hit that it sold out every day for its first three months and the team had to prep food at home in order to keep up with demand. Num Pang has since grown to eight locations in the Big Apple and was recently ranked by Zagat as customers’ favorite fast casual in the city. While the first location only had a handful of sandwich selections on the menu, Num Pang now features several regular and seasonal sandwiches—like the Pulled Duroc Pork, Coconut Tiger Shrimp, and Grilled Skirt Steak sandwiches—soups, salads, and noodle and rice bowls, as well as premium beverages and, in some locations, beer and wine. The restaurants are vibrant, with graffiti splashed across the walls and hip-hop blaring over the speakers.

Chaupoly says the goal with Num Pang’s menu was always to replicate his and Daitz’s experience in fine dining. “Fine dining is such an art form, from plating, making, designing the food to building your service,” he says. “This is the way I think about it: I’m going to build you something beautiful. So how do you take this and get it to the public’s eye in order for them to taste and feel and experience it? You take that concept and you put it in [a counter-service format], and you don’t really think anything different.”

He adds that the ingredients and flavors are on par with what would be served in a fine-dining format, pointing to the brisket as an example of this; taking 8 hours to cook and chill, the brisket is something Chaupoly says he could serve as a main course in a full-service restaurant. At Num Pang, it’s served in a sandwich for around $9, paired with bold and fresh flavors that are packed into every bite.

“We wanted to take the core values of our experiences … and make sure that the customer experience was what we had spent time learning in fine dining, but in an affordable, quick package,” Daitz says. “That encompasses looking at how a sandwich is built from the same perspective of how you would build a $50 entrée, which is looking at it from the texture—there needs to be some crunch, some softness—and the flavor—there needs to be some richness, some acidity, some freshness, etc. Everything you would experience when you would order a fine-dining dish, we were trying to fit into the sandwich experience.”

Now Chaupoly and Daitz hope to deliver the Num Pang experience beyond the New York market. Their team is preparing to scale the concept, and they envision national growth, starting with the Northeast. As for growth methods, they hold to the same strategy as many other Fast Casual 2.0 brands: no franchising.

“I think the old franchise model works well when you’re delivering a bread, sliced meat, and sliced cheese experience,” Daitz says. “When you have a more culinarily advanced model that you’re trying to roll out, there are obvious pitfalls in keeping the brand consistent as you go out of market.”

This is a commonly held problem among Fast Casual 2.0 brands. Because so many of them are designed around a chef-driven menu, expansion becomes a little trickier than with traditional limited-service restaurants. Daitz hails Panera Bread and Chipotle as “incredible brands” but adds that what Num Pang is trying to accomplish is more complex to execute.

“I think the hardest thing about growth is mastering consistency when you start to scale,” he says. “I like to think that the culinary innovation behind Num Pang might be in a different place than those two brands.”

Overcoming that challenge, Chaupoly says, is all about the people Num Pang brings into the fold. “How can I give a great experience? How can I give great, thought-out food, with techniques you can find in a sit-down-service restaurant, and provide that with quick service?” he says. “It becomes really about the people you have. If you can build a model that you can train and cultivate and build a good culture within your business model, then I think you have something.”