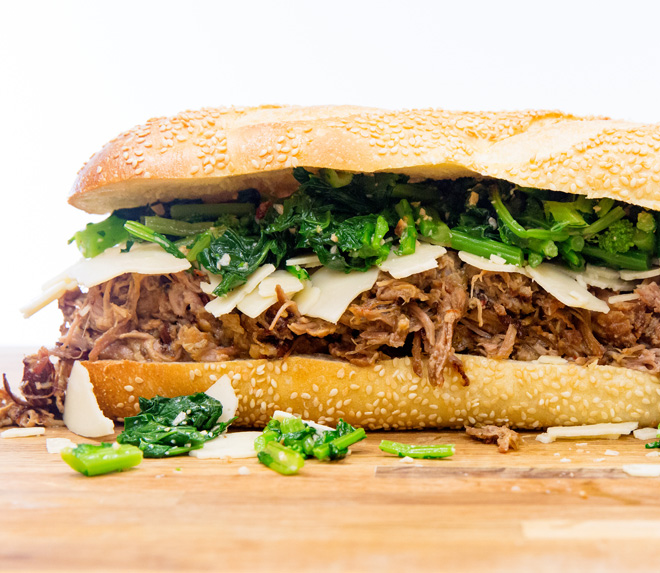 D.C.’s 14th Street corridor, just north of downtown, is your classic tale of a boarded-up neighborhood revitalized by an influx of Millennial middle-class workers and restaurant operators willing to take a chance on a down-trodden part of town. On the southern end of that north-south corridor, squeezed between an upscale eatery and a Trader Joe’s, is Taylor Gourmet, the fast-casual hoagie shop founded by childhood buddies and Philadelphia transplants Casey Patten and David Mazza. It’s one of 10 units for the company—all of them in the D.C. area—and it’s outfitted with the same sleek and sustainable design that has come to define the brand.

On a warm fall afternoon, before the dinner rush, Patten sits near the same table where President Barack Obama, a fan, dined a few years back. He’s a charismatic 35-year-old who wears many hats for Taylor Gourmet, one being head of culinary development. As a sampling of fall seasonal items rotates by—the Tuscan Chicken Barley Soup; the City Hall hoagie with a breaded chicken cutlet, barbecue sauce, smoked bacon, blue cheese, house-made pickles, and a seasonal slaw; and the KimchiSteak, with bulgogi-marinated ribeye, kimchi, aged Cheddar, toasted sesame seeds, and scallions, among other items—Patten describes each with conviction, using words like sexy to illustrate the food, discussing at length the laborious processes that go into every ingredient.

Like &pizza, Taylor Gourmet is aiming to create a neighborhood shop experience that rejects the typical chain vibe. To do so with a menu that rotates several items seasonally and with upscale ingredients that are all made in-house at each location, Patten says, the company is working on systems that allow for consistency but without risking any of the quality the brand had at day one.

For 2016, Taylor Gourmet plans to build five more D.C.-area locations. After that, the company plans to expand throughout the East Coast, with Patten naming New York, Boston, Atlanta, Texas, and North Carolina as growth targets.

Still, for as big as Taylor Gourmet becomes, D.C. will always be home; since first opening the shop in 2008, Patten has become an integral part of the fast-casual community there, having collaborated with several other area operators and helping some get the connections they need in real estate, supply, and other facets of the business. “For me, I don’t want people to hit the same pitfalls as I did, because sometimes they’re too hard to dig out of and it takes too much time, money, and effort,” Patten says. “At the end of the day, we’re all entrepreneurs. You never want to see someone fail anywhere.”

Loyalty Programs Emerged as a Restaurant Must-Have in 2020
A Missed Opportunity for Burger King?
Convenience Doesn’t End at the Drive-Thru Anymore

How to Adapt Your Franchise Model to a Post-COVID World
Can Papa John’s Be as Big as Domino’s?
BurgerFi to Purchase Anthony's Coal Fired Pizza & Wings for $161.3 Million

Leveraging Marketing Tech to Recruit the Best Restaurant Employees
Restaurant Recovery and Reset: Outlook for 2021’s Second Half
Listen to QSR Uncut Episode 2: Is the Virtual Restaurant Bubble About to Burst?

Double Down on Digital: How Restaurant Brands are Planning for the Future
How the Asian Food Space Has Evolved in Quick Service
Chick-fil-A CEO Dan Cathy Stepping Aside in November