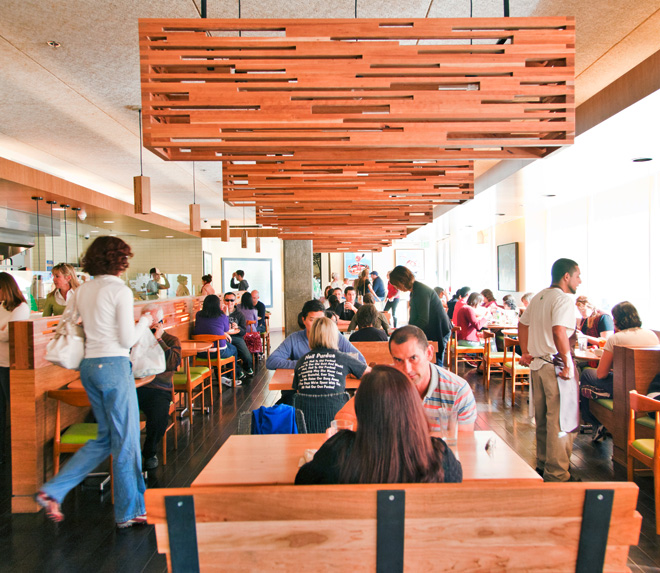 Tender Greens was founded in 2006 and has grown to 22 locations. While the core of the Tender Greens menu is salad, it also features soups, sandwiches, and plates with signature proteins like albacore tuna, steak, and chicken. Most of its produce is sourced from Scarborough Farms in Oxnard, California, which invested in the brand early on. Much of the rest of its menu is also locally sourced.

Tender Greens’ slogan is “slow food done fast,” and that stems from the chef experience each of the three founders—Erik Oberholtzer, Matt Lyman, and David Dressler—brought to the table when they decided they wanted to create a premium restaurant that was more affordable.

“We were just ‘quick casual’ by service model in that we wanted to pull the waiters out of the equation, valet parking out of the equation, so that it wasn’t so expensive, and it was also fast and efficient,” Oberholtzer says. “So we borrowed the efficiencies of the fast-food world, but wove the fine-dining and luxury space into every bit of Tender Greens.” He adds that the cofounders were “reluctant to absorb” the “fast casual” mantle, as it refers to a box created by Chipotle and Panera Bread that their team didn’t want to be lumped into.

Like many other Fast Casual 2.0 brands, Tender Greens isn’t franchising. It does, however, have an investment partner on board to help with expansion: Danny Meyer. The Union Square Hospitality Group (USHG) mogul and founder of Shake Shack invested in the concept this summer, becoming a board member and minority stakeholder—the first such investment he’s made with USHG.

With so much of its menu locally sourced—and in California, no less, the largest agriculture state in the nation—Tender Greens isn’t in a hurry to open new restaurants. Oberholtzer says USHG’s investment will help the Fast Casual 2.0 brand expand to cities like Chicago, New York, and Austin, Texas (in talking about expansion, Oberholtzer also brings up Whole Foods, noting that Tender Greens’ customer is the same one who visits the grocer). The team wants to scale its sourcing strategies along with the brand, and Oberholtzer says that will be easier with new hydroponics and aquaponics systems, through which Tender Greens can grow food under controlled conditions and as close to the restaurant as possible.

“The great thing about being aligned with Danny Meyer and USHG is that we have the best in the business to help us with this next phase, and in many ways, we see Tender Greens as a blend between his fine-dining group and the single-minded focus and scalable success of Shake Shack,” he says. “Having those two models to draw from, while having the support and commitment to hospitality and culture that Danny himself brings, as well as everybody in his organization, we’re very excited about the future.”

Oberholtzer sees the Fast Casual 2.0 movement thriving on the same idea he and his cofounders had 10 years ago: So many chefs around the country, he says, want to maintain their high cooking and sourcing standards, but in a package that is more accessible to the public.

He thinks the successful Fast Casual 2.0 brands of the future will be driven not by a desire for growth or profits but by a desire to serve unique food as a sort of community service, much like how Shake Shack first launched in New York as a community project in Madison Square Park. Operators with this vision, Oberholtzer says, will create a variety of exciting concepts all across the country that have local and regional flair.

“I think what you’ll see is there will be some great one-off local brands that emerge in markets across the country,” he says. “Then there will be other regional players that are able to scale up and enter suburban markets or secondary markets over time. And then there will be national or international brands that make it; they’ll have the bandwidth and the organizational structure and the systems and the brand identity to expand further. You’ll see success at all levels.”

How Does Recent Court Decision Affect Joint Employer Laws?
Embracing Consumer Changes for Long-Term Restaurant Success
Why is Nobody Talking About a Mobile Food Strategy?

Emerging Franchises Discover Ways to Thrive in Pandemic Conditions
How One Mrs. Fields Franchisee Opened During the Pandemic
The ‘Joint Employer’ Saga Resurfaces for Franchisors

Is Flexible Self-Scheduling an Answer to COVID Staffing Dilemmas?
How the Hourly Restaurant Workforce Has Evolved During COVID-19
How One Sandwich Chain is Tackling Labor in a COVID World