Which brands are generating the most buzz?
Customer Experience | September 2019 | Danny Klein

Opinions will always differ whether citizen journalism is helpful or harmful for the flow of information. In the case of restaurants, it often concerns an inescapable reality: Everybody's a critic. People take to review sites, social media platforms and amplify their voice among their circle of influence, however sizable or insignificant that might be. The result is that restaurants are always one digital reaction away—justified or not—from gaining or losing a customer.

But there’s no reason to see the glass as half empty all the time. The same technology spreading this word-of-mouth culture also enables brands and marketers to leverage consumer insights to improve, course correct, and discover competitive differentiators that weren’t so clear before. And all without pencils and comment cards.

Social allows restaurants to tap into consumer trends and discover what needs to be changed, and what current brand qualities should be emphasized. It’s unbridled opportunity to drive not just engagement, but authentic interactions. Just think Popeyes. The chicken chain launched a sandwich and used Twitter to explode its brand awareness. One calculated jab at Chick-fil-A led to a firestorm of commentary. And it was due, again, to the citizen-journalism nature of today’s internet—people didn’t just talk about the product, they had to try it and let everyone know what they thought. Because on Twitter we’re all important, to our own people, in our own minds. Restaurants can use that notion to their advantage.

According to analytics platform NetBase, 2018 social network ad revenues were more than $23 billion in 2018—double that of 2015. For perspective, just over a decade ago, the arena barely existed. Facebook didn’t launch its first ad until 2005. LinkedIn was a year later. Twitter introduced promoted tweets and accounts in 2010. Mobile ads didn’t arrive at Facebook until 2012, the same year Pinterest unveiled business accounts. LinkedIn added mobile adds in 2013 and Instagram created sponsored photos and videos. Snapchat joined the ad conversation in 2014.

In sum, this is really still an infant-stage realm, and it’s changing by the minute as platforms like Facebook adjust algorithms to limit organic reach and push brands into the pay-for-impression world. And yet, per NetBase, 60 percent of people said they no longer trust social media companies. This means being authentic, personal, and transparent has never been more critical.

It’s an interesting chance for restaurants. People feel connected with brands they’re familiar with and can count on, and few industries are as omni-present as the foodservice universe, especially the fast-food side, where some chains have stood for a century.

All that said, what kind of social interactions drive authentic engagement and brand passion, and how can restaurants capitalize on these experiences to drive more guest traffic? That’s the question.

NetBase broke down some data to see which restaurants generated the most buzz, and what lessons can be gleaned.

Here’s the top 10. Factors that went into “social rank” included mention volume, awareness (people talking about the brand), reach (the conversations being put out on their own channels), net sentiment, and brand passion. 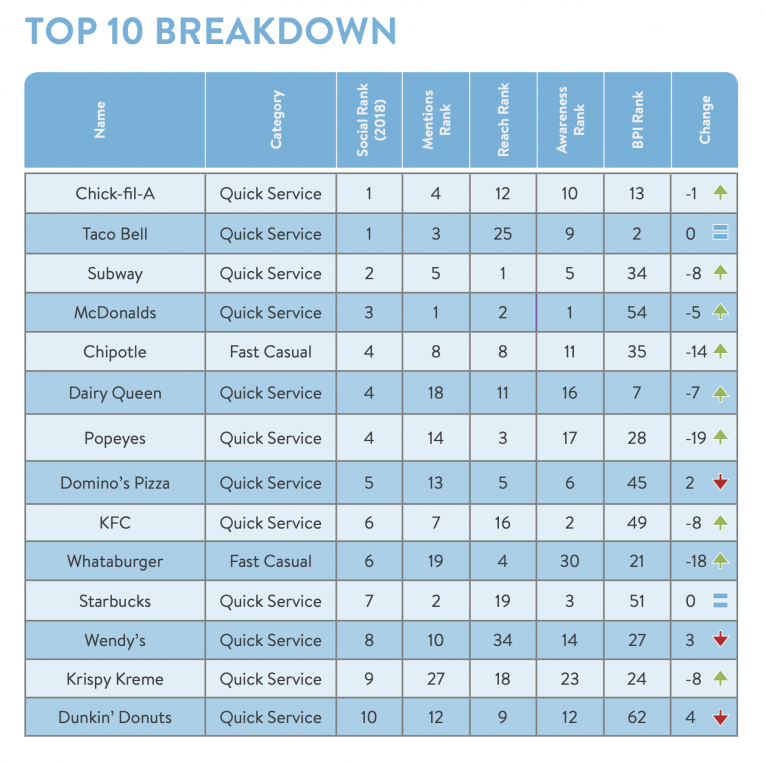 Interestingly, and perhaps not surprisingly, quick-service chains ruled this list. If you really think about the most visible food brands on the web, fast-food giants come to mind. Two fast casual chains made the cut, while no casual-dining brands broke through. 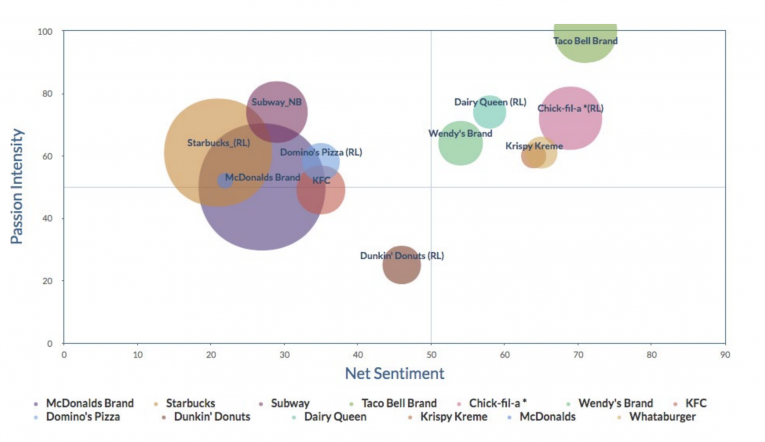 Chick-fil-a jumped a spot to tie with Taco Bell for No. 1. NetBase credited Chick-fil-A’s customer service for producing a social trickle-down effect of sorts. People make jokes and share memes about the brand’s friendliness online, which leads to strong organic reach. And, by now, it’s even fair to say it leads to employees embracing the ethos more since the spotlight is on. Hey, you can become a meme, too, if you treat customers above and beyond.

Additionally, Chick-fil-A produced enormous organic visibility from its recognizable food options. YouTube star Jacob Sartorius, who has some nine million followers, shared his love for Chick-fil-A multiple times this year on Instagram. The impression count that followed was invaluable, and it didn’t cost Chick-fil-A a thing.

While this sounds like a simple equation, it’s really not. Chick-fil-A’s breakfast, for instance, was a strong point of social conversation, NetBase said. “This goes to show, if you make great food and build your business on great customer service, people will share their love online, only giving more visibility to this up and coming restaurant franchise,” the company said.

Sometimes marketers get lost in the gimmicks. But nothing sticks around longer from a social perspective than real loyalty driven by brand DNA elements.

Where’s it coming from, and why?

If you want to get a conversation going, head to Twitter. Tumblr also appears to have some whitespace in terms of looking at what customers are sharing. 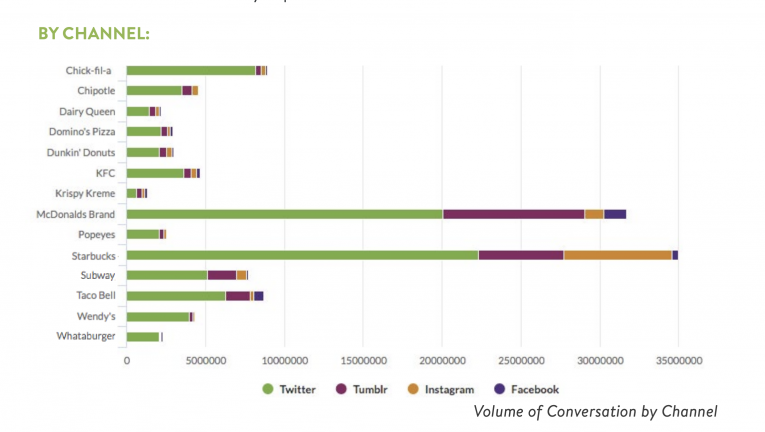 On the earlier point of using social to be proactive, restaurants can really mine these platforms for insights into their own operations. The same is true of review sites. Although many (most) people complain because they have an audience and no other reason, you can find trends and truths hiding amid the noise. If 40 people post about a restaurant’s bathroom in two days, it probably needs to be fixed. NetBase looked at order accuracy, hospitality, menu selection, quality, and value. Diving into themes allows operators to identify where a brand is performing well or needs some help, as well as what guests are saying about competitors.

In this industry, problems are always going to pop up. But can you course correct and turn a dissatisfied customer into a repeat user? That’s where a lot of the traffic battle is won.

Given that restaurants cater to a wide range of tastes and are often geographically centralized, NetBase opted for a selection of specific brands across multiple categories rather than an exhaustive list. 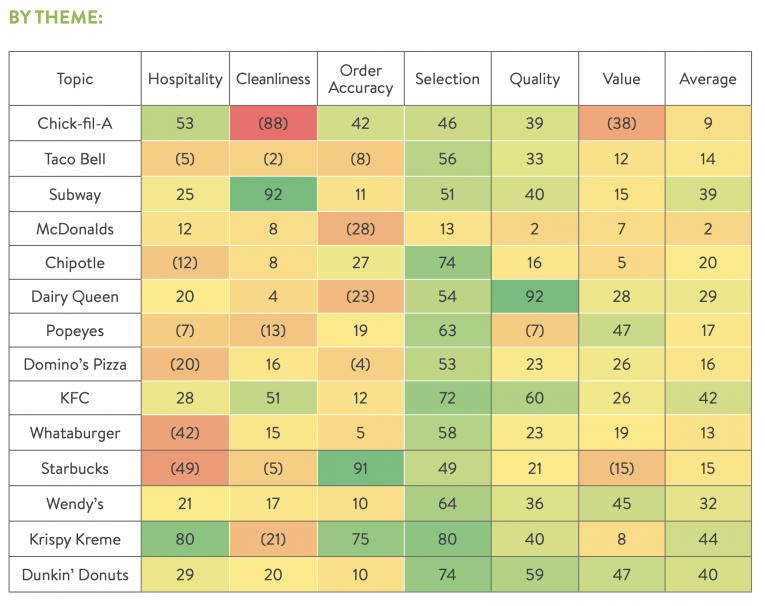 NetBase’s net sentiment score expresses a ratio of positive to negative sentiment about a brand or topic, ranging from positive 100 to negative 100. A score of 100 means all opinions of a brand are positive.

This metric alone doesn’t tell the whole story, though. The company’s “passion intensity” figure draws it clearer. This 0–100 ranking expresses the ratio of strong emotions (like love or hate) to weak emotions (like or dislike). Combined, it shows whether someone really likes or loves a brand.

A&W, as illustrated by NetBase, turned in a net sentiment of 84 percent, with brand passion of 87 percent. In other terms, the iconic chain’s fans are die-hards. On the flip side, if a chain had negative sentiment with high passion intensity, they wouldn’t just dislike them, they’d hate them.

Let’s jump much deeper into the rankings. 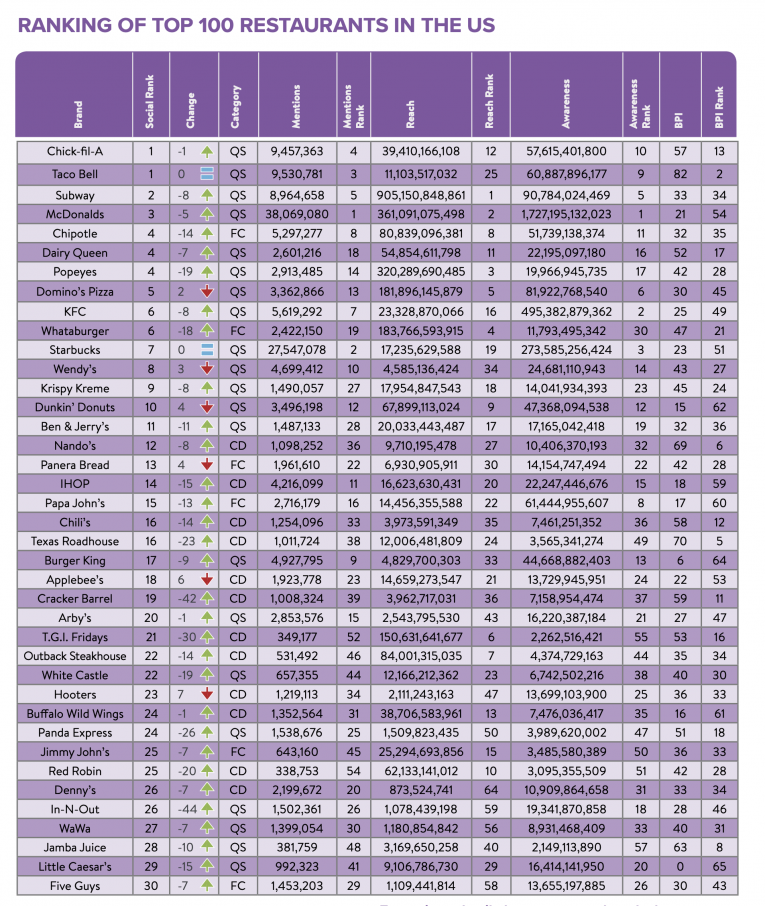 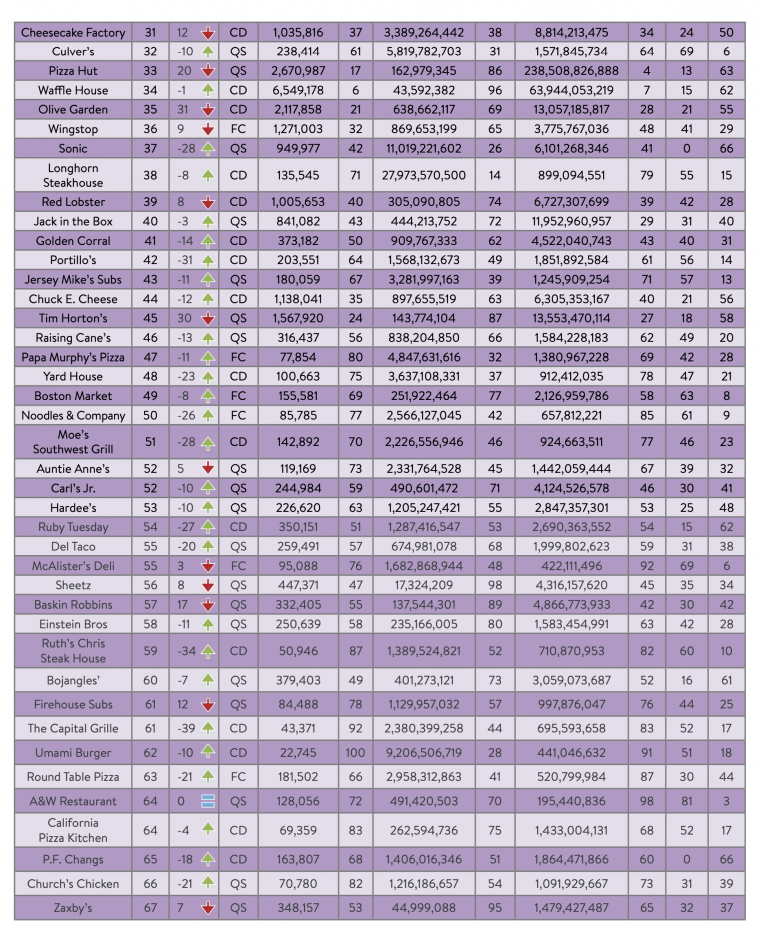 And rounding out the top 100. It’s also worth noting that some of Netbase’s awareness and reach scores were due to an inactivity and/or lack of social presence by the brand itself. As the company points out, consumers tend not to be as motivated to post about a product experience when the brand has been inactive for a while. 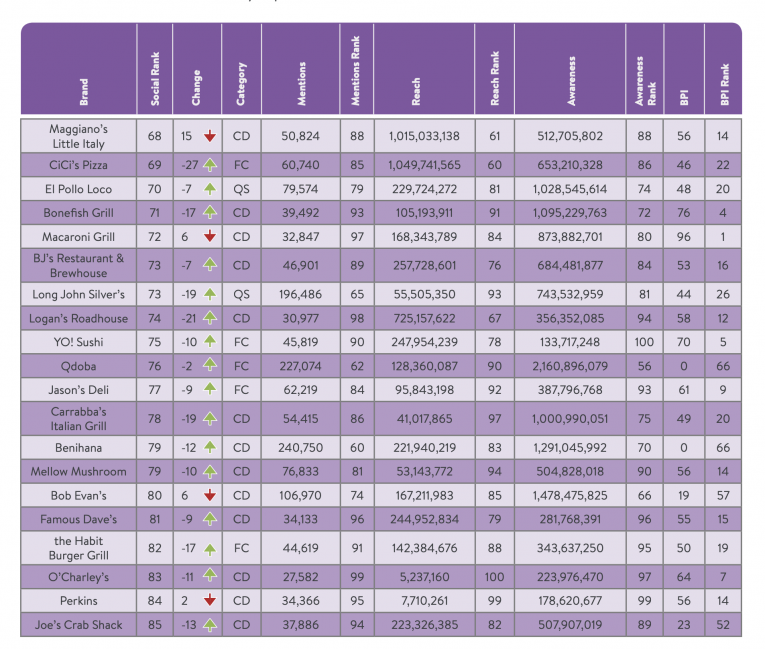 Here’s a glossary of the teams in the charts.

NetBase also looked into each category. Fast casual brands represented 18 of the 100 restaurants, with Jason’s Deli performing highest in sentiment across all themes, especially hospitality and selection. In reference to the putting-out fires note and how it can buoy a brand, Jason’s Deli suffered a possible data breach and launched a response plan that pulls up positively due to the company’s quick reaction, NetBase said. The salad bar, broccoli cheese soup, gumbo, and free ice cream also earned high marks. 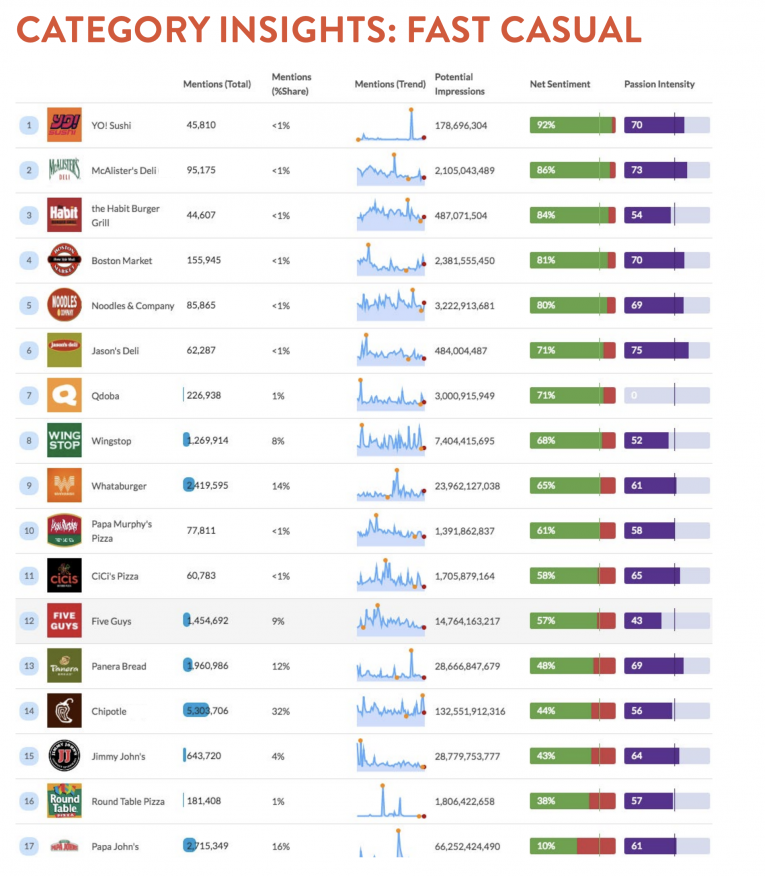 Another lift for Jason’s Deli, in terms of impressions, came from its community partners program, which offered free meals for coaches when the team brought them in, as part of the #phenomchallengelive.

Chipotle ruled the conversation category with 32 percent, moving up 12 spots from last year’s ranking. While the brand continues to grapple with negative comments related to food-safety issues and other flare ups, like when a manager refused to serve a team of “dine and dashers,” guests responded to the food. Talks of cravings (I need Chipotle right now, etc.) remained a stellar anchor to the brand’s social presence. Delivery was also a game-changer.

Whataburger’s ascension came from a few factors, NetBase said. Not all of them positive, like when a man had a drink thrown in his face for wearing a MAGA hat. On the other side, First Lady Melania Trump and vice president Mike Pence’s wife, Karen Pence, visited a Whataburger after meeting with Hurricane Harvey first responders, putting the brand in the news.

Also, Whataburger’s paid partnership with the Houston Rockets generated upward of 139,000 views for its “Whataplays of the season” video.

YO! Sushi climbed 10 spots to turn in a sentiment score of 92 and passion intensity of 70.

As for quick service: 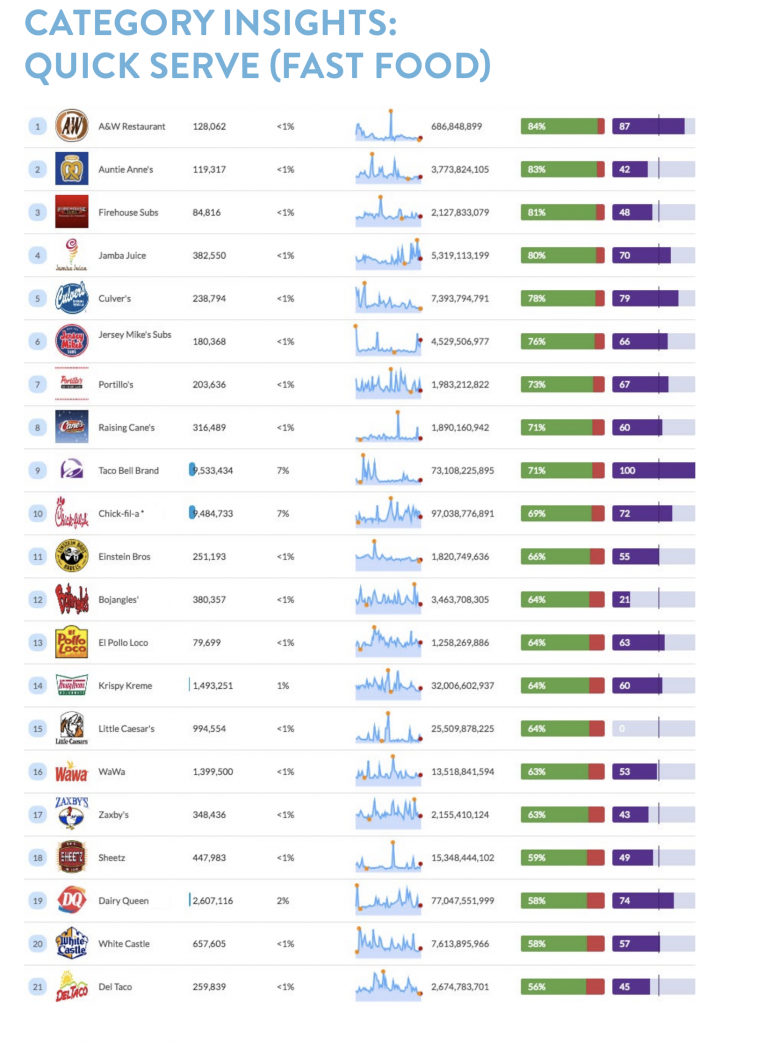 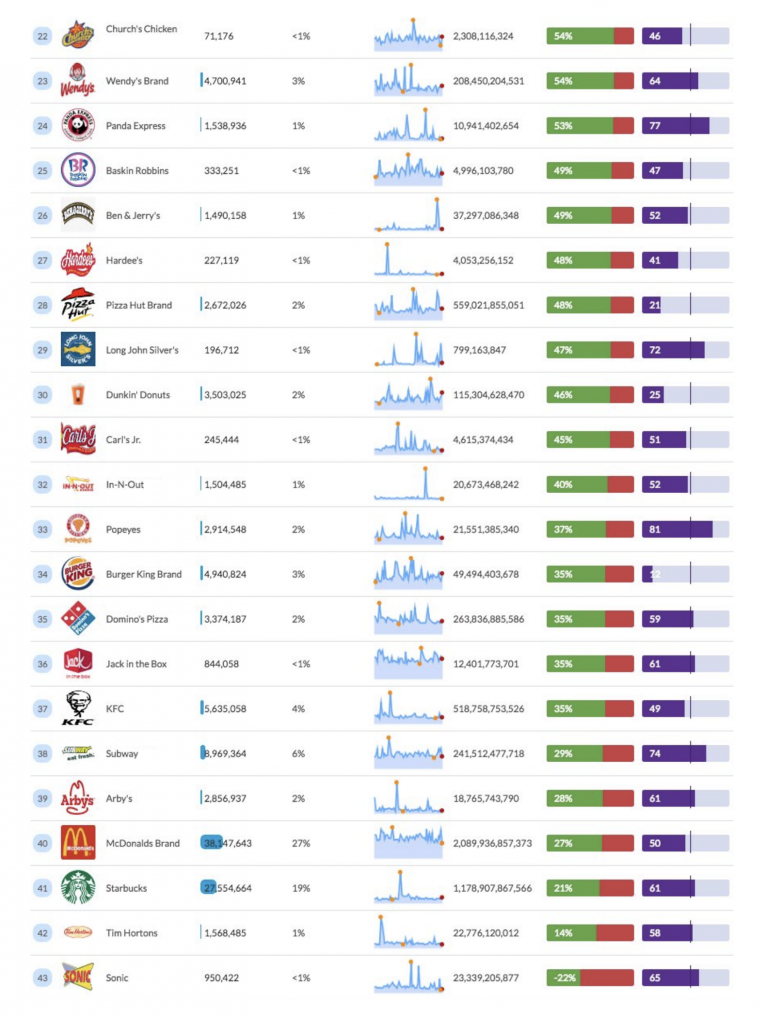 McDonald’s and Starbucks led the volume debate, with more than 60 percent conversation volume of the 100 restaurants on the list. Yet brands like Firehouse performed higher in sentiment. The sandwich chain scored high on cleanliness, order accuracy, selection, quality, and value. Taco Bell topped in passion intensity with a score of 100. The Yum! Brands chain sponsored events like MTV’s VMAs and the iheartradio music awards, which led to 300,000 mentions per event. The famed Nacho Fries also generated upward of 11,000 mentions in a year’s time—all highly positive. The “steal a base, get a taco,” deal during the World Series also produced an additional 150,000 mentions.

NetBase gave A&W high marks for its social strategy, getting labeled by many consumers as their “favorite corporate Twitter account.” Events like #nationalrootbeerfloatday and #freemugfriday kept the buzz going. A&W often holds contests encouraging retweets to win prizes. The brand’s bumps in impressions are largely due to its own social promotions, which not only enable fans to interact and win prizes, but also create online discussions around timely events. A&W’s #AWcademy awards offered branded opportunities to engage with guests and stay top of mind.

Restaurants can harness social media to reach guests in a multitude of ways. They can also troubleshoot problems on a large scale and find authentic customers who quickly become brand ambassadors. Influencers and word-of-mouth marketing allows restaurants to get in front of new potential customers by sharing their message. And paid partnership opportunities also open the door to control the story in front of key demographics, such as Taco Bell’s sponsorships.

What it can really accomplish, however, is to humanize a brand in a day when the journey to purchase is worth its weight in gold. It all just starts with listening.