Find out which brands are celebrating anniversaries and milestones this year.

Jake’s may be the youngest brand on our anniversary list this year, but its mindset is decidedly old school.

“We wanted to go back in time to where the burgers were just being introduced to the United States—back to the turn of the century when people experienced ground beef for the first time,” says John Eucalitto, president of the premium-burger chain.

Along with a name change came a whole new design, featuring a classic look of red barn-board interiors with white and stainless steel accents. “We’re just the middle-of-the-road concept,” Eucalitto says. “We see ourselves as being the concept in small-town America, and that’s what we like to be.”

In fact, Jake’s finds itself in many small towns, such as Torrington, Connecticut, and Kennett Square, Pennsylvania, and plans to continue popping up as the “hometown favorite” all across the country.

For Jake’s customers, the appeal lies in the creative products it’s become famous for, like the Turkey Dinner (a turkey burger with stuffing and cranberry sauce), Cotton Candy milkshakes, and the Grilled Chicken Club on pretzel bread.

The King of Culture

When you call the Pizza Patrón corporate office, don’t be surprised if you’re greeted with a cheery “Buenos diás!” That’s because the 100-unit Texas-based pizza chain caters specifically to Spanish-speaking neighborhoods.

“Our brand is geared entirely toward serving the Hispanic community, and so that dictates where we locate stores, how we staff our stores, how we advertise,” says Andrew Gamm, director of brand development.

Pizza Patrón, founded by Wingstop founder Antonio Swad, celebrated its aniversario de plata (silver anniversary) by partnering with Pepsi to give away Lindros collectors’ bottles. They were popular in Mexico in the ’80s and ’90s and bear the image of Cantinflas, a Mexican movie icon.

“It’s the type of promotion we like to do because it’s very cultural and it reinforces who we are in the marketplace,” Gamm says.

Although a relatively young brand, Pizza Patrón has been through several prototype changes in its time. Starting as a carryout-only model, it transitioned to a 600–800-square-foot mall/airport concept in 2004 (known as the Rapidito model). A year later, it added its first dine-in store, and a drive-thru model (known as “QSP”—Quick Service Pizza) followed in 2006.

The brand caught international attention in 2007 when it began accepting pesos at its stores, gaining 500 million media impressions worth $30 million in advertising in the U.S. alone.

Gamm says Pizza Patrón is well positioned, thanks to the growth of the Hispanic community in the U.S.

“I feel in many ways that Pizza Patrón is the right concept at the right time,” he says. “That makes our business a very good one and makes for a very bright future for us.”

On June 7, 2011, Bojangles’ opened the doors on its 500th store, located in Surf City, North Carolina. For the chicken ’n biscuits chain that started as a small Carolina brand, hitting the 500-store milestone is “a validation,” says Eric Newman, executive vice president of Bojangles’ Restaurants.

“Bojangles’ has proven itself over 35 years and over 500 operating restaurants with almost $800 million in systems sales and historical sales of more than $10 billion,” Newman says.

Opening a store at the pace of one every nine days, Bojangles’ has been one of the fastest-growing quick-serve brands over the past several years. “We intend not only to continue what we’ve been doing, but to add layers of growth to that,” Newman says. “We have a large group of new prospective franchisees that we’re talking to. In fact, there seems to be pent-up demand.”

The company has a presence in 10 states, as well as Washington, D.C., and was recently bought by Boston-based private-equity group Advent International, which has
experience with retail brands.

“I would certainly think and hope that 35 years from now,” Newman says, “you would see a national and international brand thriving by every measure.”

For Wienerschnitzel, there’s no better way to commemorate a golden anniversary than to focus on its customer, and that means giving away cash, cars, and Chili Dogs.

The West Coast hot dog chain kicked off the year by rolling back prices on the Chili Dog, offering the customer favorite for only 99 cents and helping to spur customer counts and sales.

Next came “Cash-in On a Corn Dog,” giving guests a chance to win $50,000 in cash. The biggest promotion took place in July (the month Wienerschnitzel was founded in 1961), when the brand gave away 50 Fiat 500s to 50 lucky winners.

Wienerschnitzel, which now has more than 350 units, is looking forward to moving toward smaller venues and expanding its footprint across the West. Sorry East Coasters—president Dennis Tase says the company won’t be reaching the opposite shore any time soon. 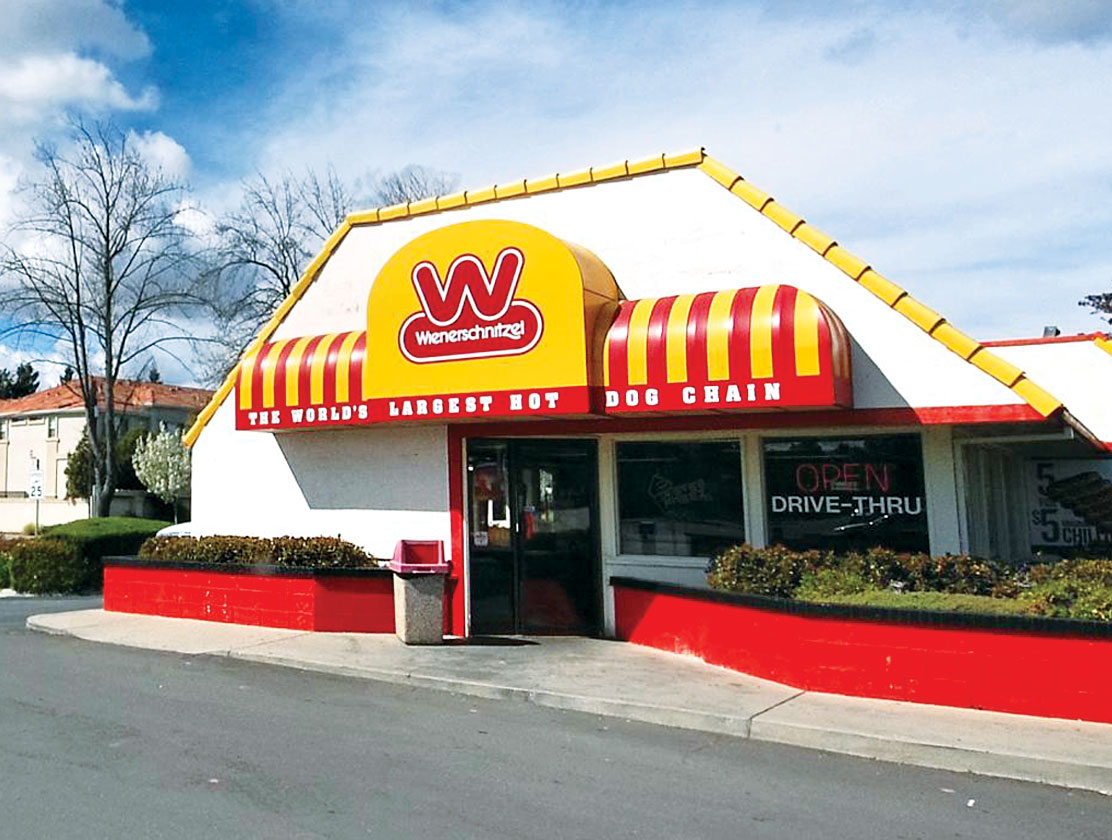 “We’ve stopped and reflected on where we’ve been and where we want to go and realized that there’s certain limitations for our company,” Tase says.

“Being as small as we are, we have limitations,” he says, “but we also have opportunities.”

And Wienerschnitzel plans to take advantage of those opportunities and stick around to reach the centennial mark.

“We have too much passion from our franchisees; they carry the lifeblood of our brand,” Tase says. “They’ll carry the brand into the next 50 years.”

New is the word on everyone’s lips at Togo’s, a West Coast sandwich shop that’s celebrating its 40th year of business.

Whether it’s additional products—like the line of Toasted Wraps including the Viva Veggie with hummus and the Cha Cha Chicken with corn salsa—or the new-fangled website, featuring a nutritional calculator and individual franchisee pages, Togo’s is introducing a handful of changes.

“Togo’s continues to evolve, but we stay true to our heritage,” says Renae Scott, vice president of branding and marketing. That heritage even inspired a systemwide relaunch program, with a design model focusing on bright colors like avocado green and vibrant orange, as well as a brand-new logo and exterior.

The 40th anniversary theme this year focuses on “40 years of love and sandwiches,” Scott says, following one man’s love for Togo’s throughout his life. Guests will see him on his first date, on road trips, and in his new home, all with Togo’s sandwiches by his side.

In August, Togo’s launched a Facebook game, where fans could work together to build a 40-mile sandwich, reaping rewards along the way.

The focus on its fans is one thing that isn’t new at Togo’s, and the company has no plans to change it any time soon.

“I see Togo’s continuing to be part of people’s lives in new and unexpected ways,” Scott says. “Togo’s will still be the same great neighborhood sandwich shop that we’ve always been 30 years from now. We may just need to add electric-car charging stations to our new design.”

If you’ve ever wondered how each McDonald’s can churn out the same standard of service, whether it’s in an airport in Dallas or a stand-alone in Sweden, here’s the answer: Hamburger University (hu).

Over the years, HU has graduated more than 275,000 McDonald’s franchisees, employees, and suppliers from all over the world. And it doesn’t stop there: More than two in five senior leaders at the company are graduates of HU.

“Hamburger University is an investment in our future where we challenge highly motivated, dedicated people and provide them with training and experience,” says Fred Turner, founder of HU and McDonald’s honorary chairman.

The university, which hit the 50-year mark in April, has six international campuses in Tokyo, London, Sydney, Munich, São Paolo, and Shanghai. It began as a 15-student operation in 1961 when Turner initiated the program in the basement of his McDonald’s in Elk Grove Village, Illinois.

“Lifelong learning is a goal for some,” Turner says, “but it’s a way of life at McDonald’s.”

‘We Didn’t Invent Frozen Yogurt, We Just Innovated It’

Celebrating 30 years as “The Country’s Best Yogurt” this month, the frozen yogurt chain has been working hard to update its image.

“We did a lot of introspection and soul-searching from a brand perspective last year in terms of, ‘OK, we’re 30 years old. Are we old and tired, or are we contemporary and relevant?’” says Greg Allison, vice president of marketing for TCBY.

The answer can be found in the newly designed logo and a fresh platform focused on self service and the customer experience.

To promote the transformation and its anniversary, TCBY launched a global YouTube contest, in which fans were asked to tell the world what the fro-yo concept meant to them. 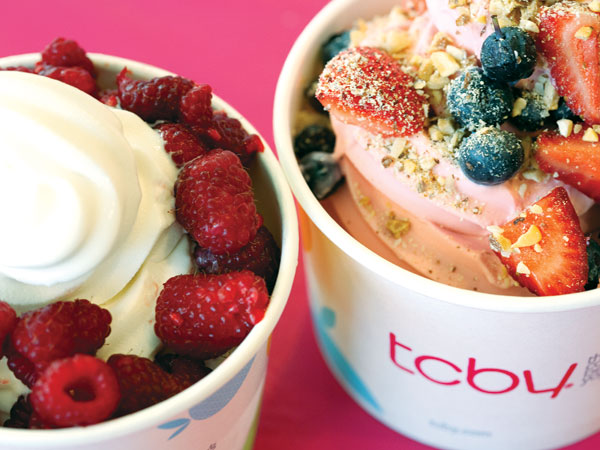 “We started off the 30th-anniversary year by letting our customers share some things about us, because the brand is not what we say it is, but what they say it is,” Allison says.

This month, TCBY is going old school with its “Throwback Flavors,” giving guests the chance to taste some of the company’s most popular flavors from over the years.

“What consumers can expect from TCBY is more flavors more frequently,” Allison says.

“While we have great flavors today, and some of these flavors have been around for 30 years, we know we need to come up with new flavors and new taste profiles.”

Although growth had been slow until the last few years, Capriotti’s is now operating 70 units in 11 states.

“The original owners didn’t have a lofty growth goal, which is why they really took their time and grew at a pace they were comfortable with,” says Ashley Morris, CEO of Capriotti’s.

“We bought the company with 45 operating restaurants, and we bought it with the notion that this is going to be a 1,000-chain store one day,” Morris says. The sandwich shop plans to open 300–500 units over the next four to six years.

Since joining in 2008, Morris has been impressed by the company’s success in the Southwest and the Mid-Atlantic. “We were able to grow the brand in two geographic areas located 3,000 miles away from each other and made it a success on both sides of the country,” he says.

Although it added salads to its menu lineup in June, which was the first large menu addition in Capriotti’s history, the company isn’t going overboard with anniversary celebrations.

But if you live in the Las Vegas area, be on the lookout for the chain’s big “Birthday Bash,” set to take place later this year.

Giving Back to Those We Serve 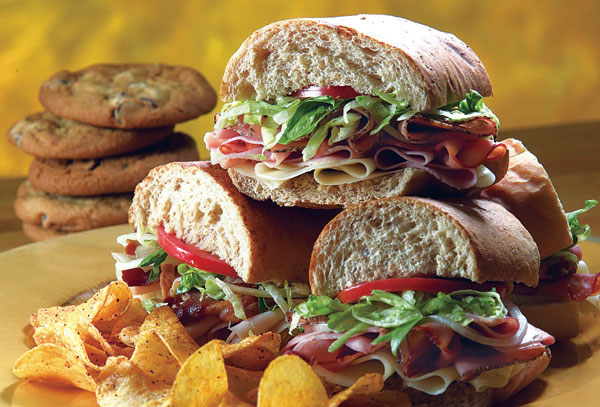 As a company that’s been serving authentic East Coast subs for 55 years, Jersey Mike’s has learned to make it easy.

“It’s a fairly simple deal: We find great franchisees, we make great subs, and we give back to the communities that we serve,” says Hoyt Jones, president of Jersey Mike’s Subs.

In celebration of its big anniversary, the sub company kicked off the year with a “Month of Giving” in March, in which every Jersey Mike’s store across the country raised funds for a local charity.

The fundraising month culminated in a national “Make a Difference Day” on March 28, a day on which any customer who made a charitable donation received a free regular sub.

The company is now in the middle of a six-month-long partnership with the Susan G. Komen Foundation, aiming to raise more than $1 million dollars for breast cancer research by the end of October.

The company continued its charity-driven celebration with a national conference in June for franchisees and employees.

Special awards were given to Inspiring Partners who were recognized for their their community involvement.

Aside from its giving mindset, Jersey Mike’s has something else to celebrate this year: The company is slated to open its 500th location this month.

Some of Jersey Mike’s other recent victories include breaking into new markets in Washington D.C., San Diego, and Chicago.