The Arriviamo Bar is Starbucks' first in the U.S.

Inside Starbucks’ massive 23,000-square-foot Reserve Roastery in New York, which opens Friday, is a first-to-market U.S. entry for the java chain. The Arriviamo Bar is Starbucks’ stateside debut of its craft cocktail concept inspired by the Italian tradition of aperitivo (early evening social cocktails paired with small bites).

The New York City edition is modeled after the Arriviamo Bar in the Milan Roastery and features a bar menu concepted by mixologist Julia Momose. It features an assortment of cocktails ranging from classics like Aperol Spritz to coffee- and tea-inspired creations.

Specialty cocktails include the Nocino Notte, made with cold brew coffee, gin, and black truffle salt, and the Triomphe, made with Teavana/MC Darjeeling de Triomphe Tea, gin, dry Riesling, aquavit, passionfruit sparkling water and orange saffron bitters. It also serves a selection of beer and wine.

“Opening a bar with beautiful wine and drinks is one thing, but we’re taking what we know best, coffee and tea, and using that to elevate everything,” Liz Muller, chief design officer and senior vice president of Starbucks, said in a statement. “The unique drinks, the glassware—it will be an experience to open your palette and your mind to new tastes and combinations.”

At 60 feet, the mixology bar is the longest in any Starbucks Roastery worldwide, and is front and center on the store’s mezzanine. Guests can view the concept from every corner of the Roastery. It greets customers who walk through the door—fitting since Arriviamo means, “we have arrived” in Italian. 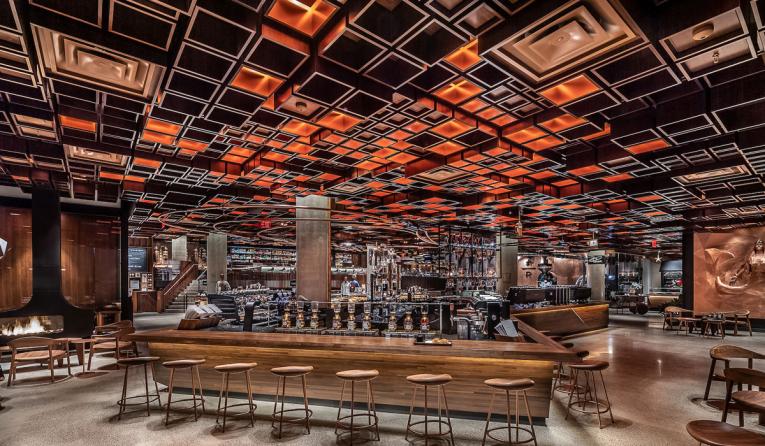 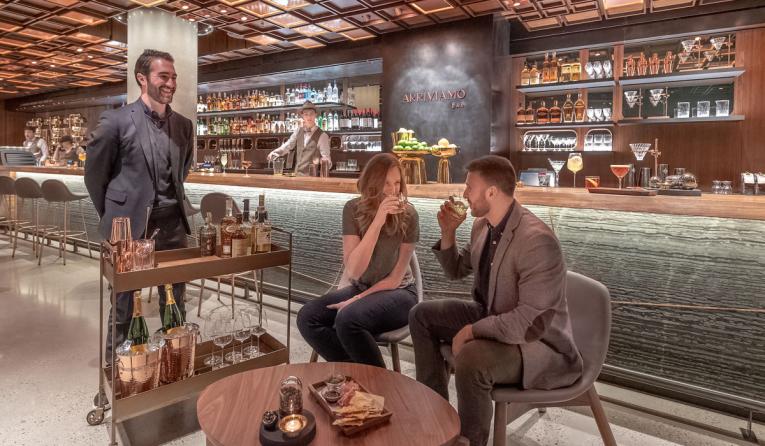 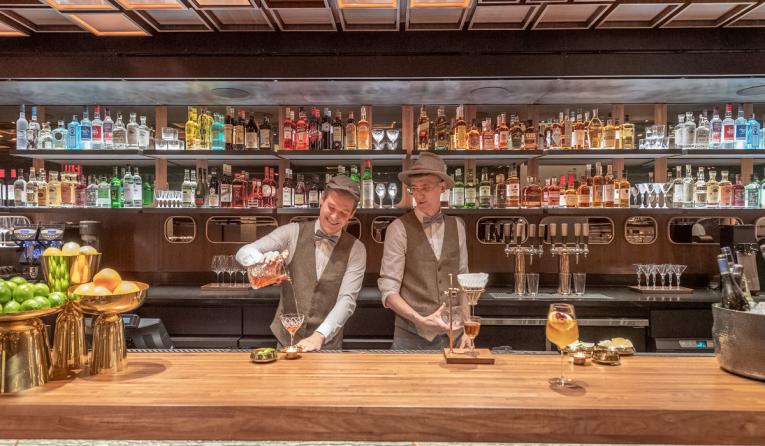 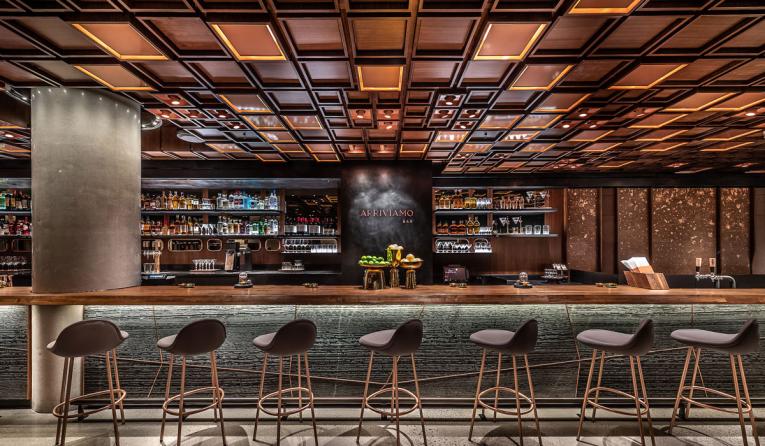 “We knew if we were opening a bar in this neighborhood, it had to be among the best, and this is truly a statement,” Muller added. “I want to have my party there.”

The mixology feature is just a sole aspect of one of Starbucks’ most ambitious designs to date. Located in New York City’s meatpacking districting, it marks the fourth Starbucks Roastery and second in the U.S., joining the Seattle venue. The others are in Shanghai and Milan, with future openings slated for Tokyo and Chicago in 2019.

“We designed the Roastery as the pinnacle experience around all-things-coffee, and there is nothing else like it in the world. With premium coffees, teas, mixology and the iconic Milanese Princi Bakery, it serves as a Starbucks brand amplifier and a platform for future innovation,” said Kevin Johnson, Starbucks CEO, in a statement. “Beverages such as Draft Nitro, Cold Foam and the recent launch of Juniper Latte all began at the Roastery and have since been introduced to Starbucks locations around the world. It is the ultimate Starbucks Experience and an unforgettable way to connect with our customers.”

Howard Schultz, Starbucks’ former leader who now serves as chairman emeritus after departing the board of directors in June, opened the first Big Apple Starbucks on Broadway and 87th Street in 1994. Now, there are 350 Starbucks across the five boroughs and about 5,000 employees. The Reserve itself employs close to 300 people, including roasters, baristas, commessas, and mixologists.

Also akin to fellow Reserve venues, the location is designed to reflect its community. It’s housed on the street level of a new nine-story office building. “New York is a hub to the world,” Muller said. “It’s an unbelievable place with such history. The meatpacking district has a fantastic history of industry, and the neighborhood has an electric energy; it is alive. We’ve designed a space where the excitement and dynamic activity of the neighborhood is mirrored in the Roastery. We want our customers to come in and feel very inspired.”

Some design features include a ceiling featuring an “undulating ocean” of squares and rectangles inspired by the building’s exterior and by the grid of New York City blocks outside. The ceiling also features a network of twisting, subway-like “symphony pipes” through the freshly roasted beans travel (making the tinkling sound of rain along the way) to silos at the main bar, or the take-home scoop bar. 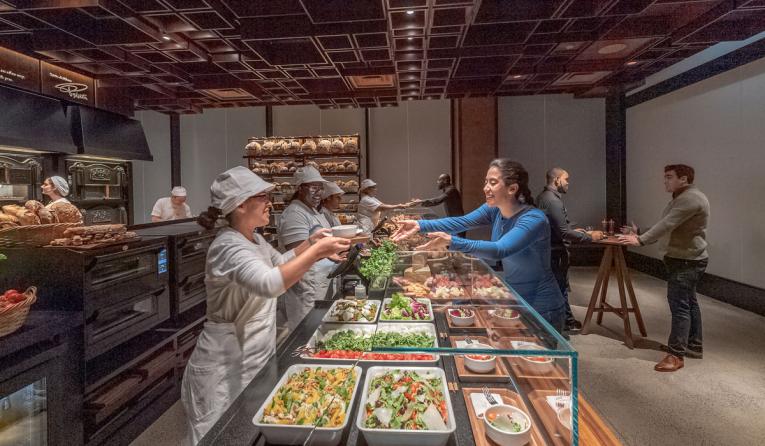 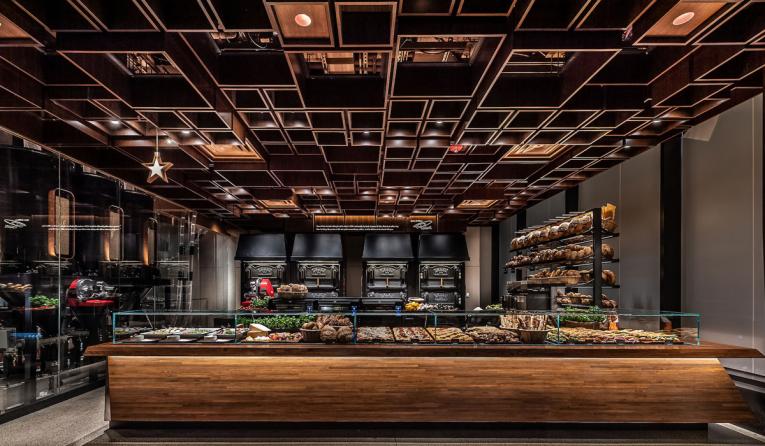 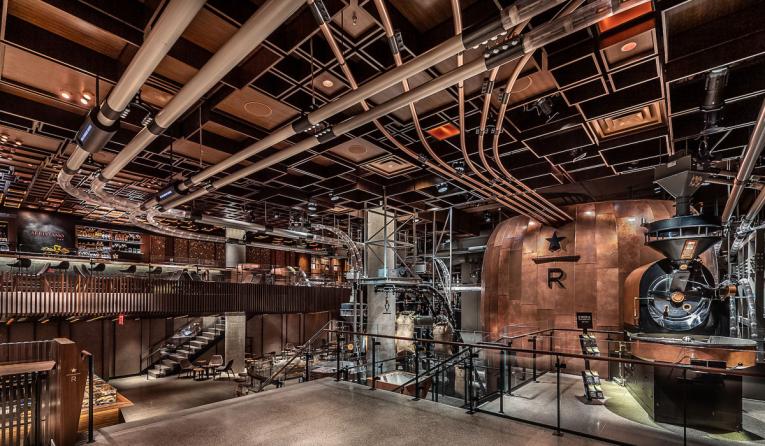 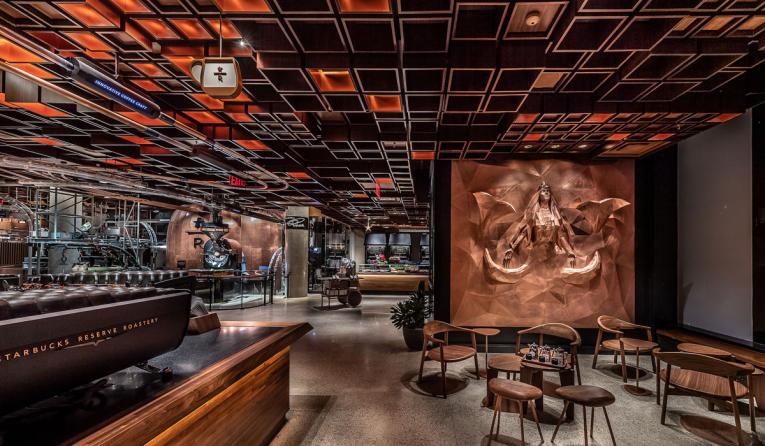 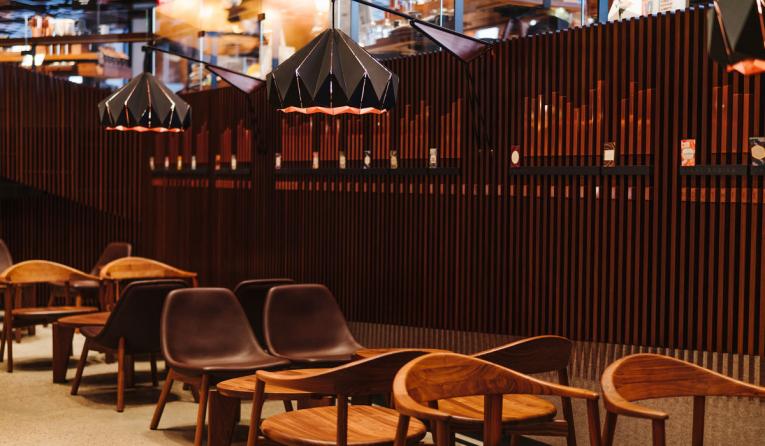 Starbucks worked with longtime collaborator Bassamfellows on the design of an exclusive suite of walnut furniture for the New York Roastery.

Also inside the Roastery is Starbucks’ Milanese boutique bakery concept, Princi, which makes breads, Pizzas, cornetti, focaccias, desserts, and more on-site. The first Princi location in the U.S. opened at the Seattle Roastery in November 2017. Starbucks said at the time Princi would become the exclusive food offering in all new Starbucks Reserve Roastery locations. Starbucks has a plan to scale these as a stand-alone concept as well. The first opened in New York City this past October.

“There’s a glorious display counter with bakery items, salads and desserts, and you can stand outside on the street and see bakers taking fresh bread from the ovens through the window,” Muller added. “It’s a really beautiful bakery experience.”

Another feature of Starbucks’ New York City Reserve location is the “scoop bar.” There customers can take home bags of the 14 rotating, freshly roasted coffees from farms around the world. 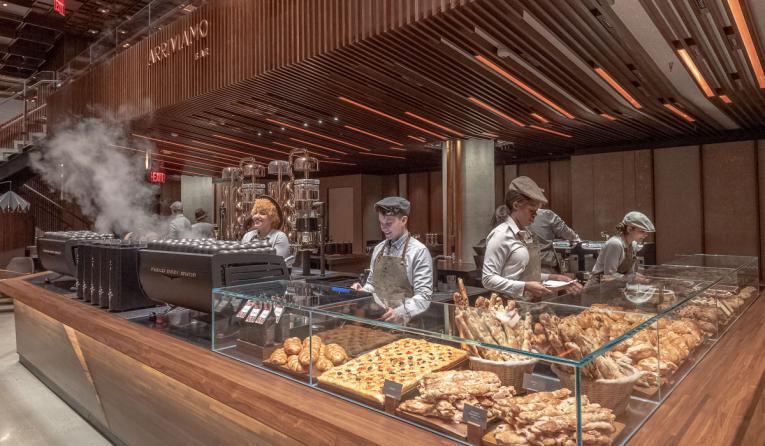 Starbucks has plans to scale its Princi concept as a stand-alone concept as well. 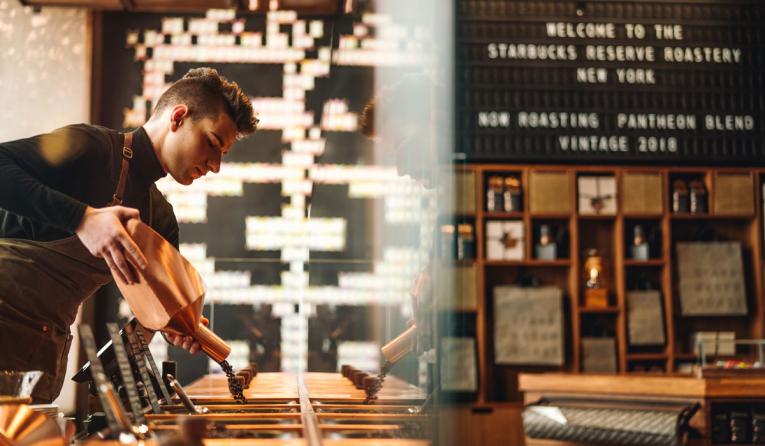 At the “scoop bar” customers can take home bags of 14 rotating, freshly roasted coffees from farms around the world. 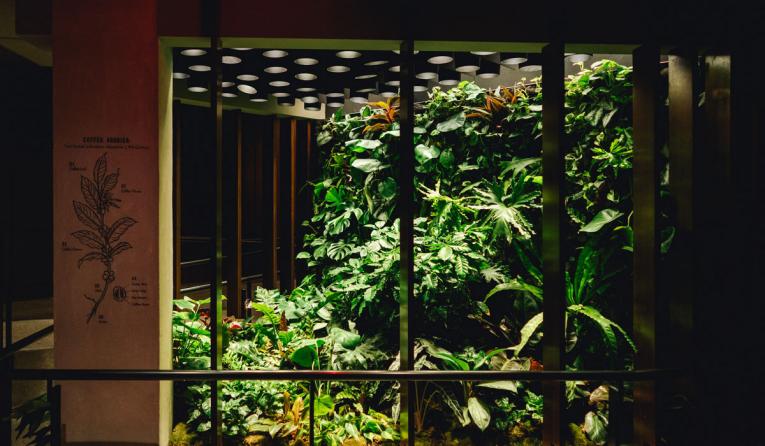 The cellar features another first for Starbucks—a terrarium inspired by Hacienda Alsacia.

“In true mercantile tradition, we wanted to make sure we showed the customer what we were trading,” Muller said. “The scoop bar features a vintage hanging scale to celebrate the tradition of the neighborhood and nine beautiful coffee bean silos in the window that will be manually filled each morning, so you’ll be able to walk by and say, ‘Wow, they’ve got Colombia and Brazil today.’”

The location features the largest fully operational coffee roasting plant in Manhattan, and will roast more than 1.5 million pounds of coffee per year, Starbucks said. Each Roastery features a custom cask to hold the freshly roasted beans as they rest before being used. New York’s is a 30-foot sleek, hammered copper cask fabricated and installed by A. Zahner, an internationally known engineering and fabrication company best known for the use of metal in the world of art and architecture.

The cellar features another first for Starbucks—a terrarium inspired by Hacienda Alsacia, the Starbucks coffee farm in Costa Rica. Furbish in Baltimore created the terrarium and cultivated and curated plants for about six months before installing them in the Roastery.

Starbucks is coming off one of its stronger quarters in recent periods. After a string of soft results, including its lowest comps in nearly a decade last quarter, the java chain surprised Wall Street with an expectations-battering Q4 in October. Starbucks posted same-store sales gains of 4 percent in the U.S. and Americas—its best in five quarters and easily ahead of analysts’ forecast of 2.7 percent. Adjusted earnings per share of 62 cents beat 60 cents. Revenue upped 10.6 percent to a record $6.3 billion from $5.7 billion last year (better than the expected $6.27 billion), and global same-store sales rose 3 percent over the 2.3 percent expectation.