Honeygrow differentiated itself from the fast-casual pack by offering customizable stir-fries.

For its first few years in business, Honeygrow enjoyed the same kind of momentum and accolades as other trendy fast casuals popping up on the East Coast. Its unique stir-fry menu and ahead-of-its-time touchscreen ordering platform helped it earn a loyal following and propelled it out of its home market of Philadelphia and into cities like New York, Boston, and Washington, D.C.

But in 2018, Honeygrow's momentum came to a screeching halt.

“It was the end of last year, we were getting beaten up, and it just sucked,” says Justin Rosenberg, Honeygrow founder and CEO, in the latest episode of QSR’s podcast “Fast Forward.” “It was just like, wow, we had massive success only to quickly see it turn to the polar opposite. And we had to have really tough conversations with board members, to employees, to my family, like, ‘Hey, if this doesn't work, what are we going to do?’”

The problems started at the beginning of 2018, Rosenberg says. While company sales were mostly good, two other bets the company had made weren’t panning out: its expansion into Chicago and the launch of the Honeygrow sister concept, Minigrow.

Minigrow launched in 2017 as an effort to score real estate in more urban markets, especially New York City. It didn’t require a hood like Honeygrow, so it could fit into smaller footprints with a more streamlined menu.

But Rosenberg says Minigrow “never really took off”; customers didn’t understand it, he says, and it couldn’t re-create the foundational elements that made Honeygrow a success.

“The reality is that Honeygrow works. You walk in, there’s the smell, there's cooking, there's theater. The food's really good. We're buying as local as possible. It's a good experience for a giant range in terms of demographic,” he says. “And Minigrow took a little more time to launch, and we launched it where rent’s really high and competition’s crazy.”

Meanwhile, the three Honeygrow stores in Chicago weren’t meeting expectations. Rosenberg says the company made some bad real estate decisions; two of the units were downtown but not in great locations, and one was in the suburbs but anchored by a mall, which turned out to be a disadvantage. Further, a brutal Chicago winter likely stymied any kind of traffic momentum (“You want that first six months to be really great,” Rosenberg says, “and it wasn’t.”)

By early 2018, Rosenberg says, it was clear something needed to change.

“You have to make a decision. I'm in a leadership position. It’s how I roll,” he says. “The numbers don't lie. We could sit here and high-five and kumbaya, and from the outside we look great. Or we can make some tough decisions and do what we have to do to survive and be great. So we started closing the restaurants at the end of last year.”

The company closed four Honeygrows and four Minigrows; all three locations in Chicago were shuttered. It also paused planned expansion. Today, there are 25 Honeygrows in seven states, and two Minigrows—one each in Boston and New York. 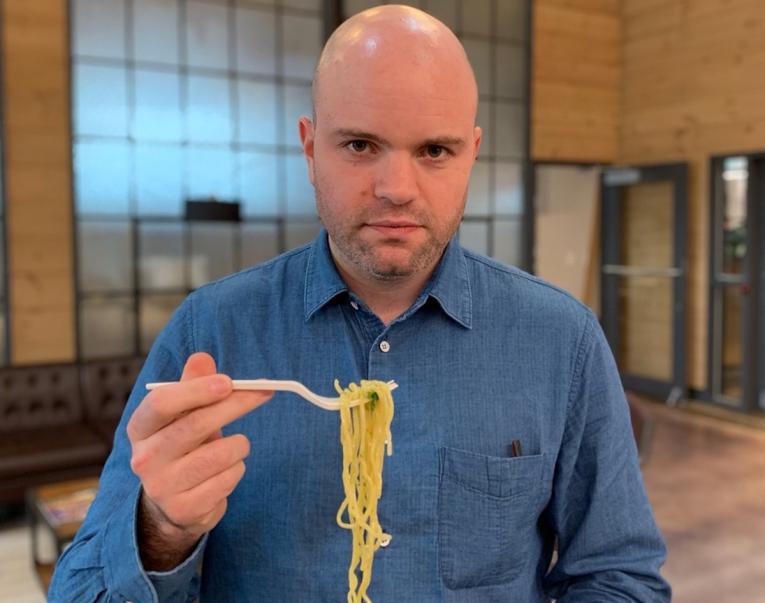 Justin Rosenberg opened the first Honeygrow in Philadelphia in 2012.

It was a wake-up call for a brand that rode fast casual’s momentum in the early 2010s to quick expansion and millions in investment. Rosenberg opened Honeygrow in 2012, just as the fast-casual category was establishing itself as a restaurant force to reckon with. While burgers and salads were especially taking off in the fast-casual format, Rosenberg—who had recently converted to a plant-based diet—decided to open a stir-fry concept that cooked customized noodles, vegetables, and proteins in a wok right in front of the customer.

Honeygrow quickly grew to 30-plus locations and by December 2017 had raised $70 million in capital.

But while the store closures may have killed the brand’s momentum, Rosenberg devised a plan to ensure the brand itself could be saved. He took a multipronged plan to his board in 2018 that tasked the company with getting out of some bad leases it had signed, reducing corporate expenses, and driving same-store net operating income (NOI).

In addition, Honeygrow renegotiated its third-party delivery fees (Rosenberg says it was a $700,000 expense in 2018 and the company couldn’t figure out if it was incremental) and rebooted its corporate culture.

“We made a lot of hires [early on] where I think people jumped in for the opportunity, which is fine, but they weren’t necessarily willing to put in the work,” Rosenberg says. “And people became more mundane. At the office, people were leaving earlier and earlier and earlier, and I'm here late watching this. There was that lack of passion and love that made it so successful for the first five years.”

Beyond all of that, Rosenberg says in-store performance was due for an improvement. He says the team started looking into its data and discovered that the average ticket time was 11–12 minutes, while order accuracy was lagging. So they revised their training procedures and encouraged some friendly competition among team members to improve performance.

“We wound up focusing so hard on speed, while maintaining quality and accuracy, that today our ticket times around 6 minutes and 30 seconds,” he says.

One year after Rosenberg’s decision to close stores, Honeygrow is back on track. He says the brand is EBITDA positive, and as of July 2019, its same-store NOI was up 55 percent. Expansion is once again in the cards; while Honeygrow will continue to open urban locations where appropriate, he says, it’s also investing in suburban growth, with stores in cities like Christiana, Delaware; Rockville, Maryland; and Pittsburgh.

And it now has the right team to drive those expansion efforts. Rosenberg says the corporate culture at Honeygrow’s Philadelphia headquarters is all in on making the fast casual a thriving national chain.

“That culture has returned, and the team truly buys into the mission and what we’re doing,” he says.

It’s a big turnaround for Honeygrow, but Rosenberg isn’t much for singing his own praises. After all, he says, it was just another bump in the long road to success.

For more on Honeygrow’s rise and Rosenberg’s efforts to reboot the brand, listen to the latest episode of “Fast Forward” by streaming above. Access the full “Fast Forward” archive here.