The OG in Chicken Fingers is Ready for the Spotlight

Guthrie’s is planting its flag in simplicity and profitability as it looks to franchise growth.

There’s no denying that chicken is hot right now. From Popeyes and Chick-fil-A crowing over chicken-sandwich superiority to Wingstop dominating during the pandemic and Nashville hot chicken brands like Dave’s and Hattie B’s emerging as formidable players, the industry is flying high even as many restaurants struggle to recover from the COVID crisis.

That’s especially true of chicken-finger brands, as the likes of Raising Cane’s, Zaxby’s, and Slim Chickens are all enjoying big success in 2020. And now another chicken-finger concept—in fact, the originator of the space—is ready to ride those tail feathers to its own glory.

Guthrie’s, a 65-year-old concept out of Auburn, Alabama, may not have the name recognition of those other chicken franchises, but its decision in 1982 to scrap burgers from its menu gave it the distinction of becoming the world’s first chicken-finger-only restaurant. And now CEO Joe Kelly Guthrie, son of Guthrie’s founder, is determined to reclaim the credit as being the OG in the space while also tapping into the chicken craze for growth.

“We don’t want to be left behind with our own product that we created,” he says.

Hal Guthrie opened the first Guthrie’s in Haleyville, Alabama, in 1955 as a family-style drive-in serving comfort food like burgers, steaks, and milkshakes. The restaurant added chicken fingers to the menu in 1978, and when it opened its second location in Auburn in an old Sonic, Guthrie says, the team realized that chicken fingers were accounting for 60 percent of sales. So they scrapped the rest of the menu and committed to growing with chicken fingers as their core product.

“We did try a couple of things in ’06, ’07, and quickly realized that we weren't experts at anything else but chicken fingers and went back to just chicken fingers on the menu,” Guthrie says. “So that'll make twice in our 55-year history that we had served multiple items, and it was just not for us. We found a really good niche.”

At first Guthrie’s growth was slow, reaching five locations by 1992. It’s since grown to about 40 units around the Southeast and Midwest, and in the intervening years, brands like Raising Cane’s and Zaxby’s have put chicken fingers on the map.

Like other chicken concepts, Guthrie’s has seen its sales surge during the COVID-19 pandemic, largely thanks to its drive thru. Guthrie says sales are up 30–40 percent across the board. That’s a big reason why he says the time is right to ramp up expansion. 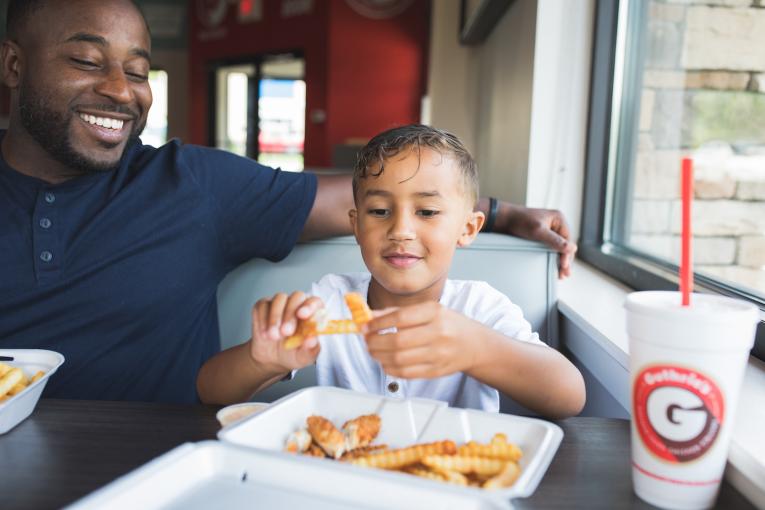 Guthrie's sales are up about 30–40 percent during the COVID-19 pandemic.

Guthrie plans to pitch potential franchisees on three key advantages that the Guthrie’s business holds. The first is being the originator of the space, and the second is the simplicity of the model, which Guthrie says helps keep labor to about half of a traditional quick serve.

“I could teach you how to cook our food in about 30 or 45 minutes, and within a day or two you would be fairly proficient at it,” he says.

The third advantage is the big one: profitability. The popularity of the product combined with its simplicity of operations means that Guthrie’s restaurants crank out a generous profit. And the company is hoping to improve that profitability; to prepare for the next growth phase, it developed a new store prototype that cuts the footprint from around 3,400 square feet to about 2,000, with a heavy emphasis on drive-thru business.

“We can easily do $20,000–$25,000 days out of that 2,000 square feet, and have done that at some of our franchise openings in the last year. If you could do that kind of volume, you don't need a bigger store,” Guthrie says. “We are the most efficient concept there is. … We're the most profitable restaurant concept that there is, and I could put my numbers up against anyone's.”

Guthrie’s has plans for about 20 new locations in the next year, half of which will be corporate owned. Guthrie says the reality of the chicken-finger category today is that the major players are fast becoming national chains, opening the door to nearly every community in America.

“I believe you will see chicken-finger restaurants on every corner in every town, just like you see hamburger restaurants,” he says. “We can pretty much make it work in virtually any size town over 2,000 or 3,000 people.”