The founder of Punch Bowl Social has a new brand, service format, and plans for the future.

Robert Thompson has never lacked for ideas. But he’s been around eatertainment long enough—perhaps longer than anybody else at 25 years, when he introduced Buffalo Billiards & Havana Diner Lounge—to know it takes more to give a big-box concept a true shot. Holistically, Thompson felt he had an idea stirring already, one that could find 6 percent in the P&L from a food-hall-like service style and smaller footprint.

What pulled the founder and former CEO of Punch Bowl Social in, however, were the calls.

There’s little gray area when it comes to eatertainment’s COVID journey. Chuck E. Cheese parent company CEC Entertainment saw comparable venue sales drop 94 percent from March 17–March 26 in 2020. That April, the company furloughed many of its hourly workers and about 65 percent of its support center staff before declaring bankruptcy in late June.

Dave & Buster’s stock plunged 89 percent during an early stretch (from $46.25 per share to $4.87) as it furloughed more than 15,000 employees, temporarily closed all 137—at the time—locations and reduced store management and corporate staff nearly 90 percent. The brand was spending roughly $6.5 million per week that spring.

The aforementioned Punch Bowl Social, which struck a major deal with Cracker Barrel in July 2019, with the casual icon taking a non-controlling interest, filed for bankruptcy amid COVID as well. Thompson left the brand to pursue other interests, including buying and revamping The Frenchmen Hotel in New Orleans and opening Three Saints Revival this past November in Denver. Cracker Barrel divested, and after a battle between lenders CrowdOut Capital and Sortis Holdings, CrowdOut acquired the chain with a $32 million credit bid while Sortis obtained assets not associated with the bankruptcy case.

To put it in plain terms, a category defined by social gatherings was cratered by a marketplace suddenly characterized by crowd avoidance. But much has changed since. Dave & Buster’s and Chuck E. Cheese forged comebacks, with the former even buying competitor Main Event for $835 million in April. Concepts have sprung up as well, from darts to golf-themed models.

There’s pent-up demand to capitalize on as routines bounce back, and a clear, social-driven alternative to the convenience, digital-centric options that define much of fast food these days.

Going back to Thompson’s initial spark, Jaguar Bolera was devised for today’s market, and where eatertainment can slot in, rather than a throwback to the category’s roots.

Guests queue up and order from a counter and then grab a device and go wherever they want. Using geo-tracking, servers find guests and bring orders anywhere within the four walls, even across multiple floors, Thompson says. 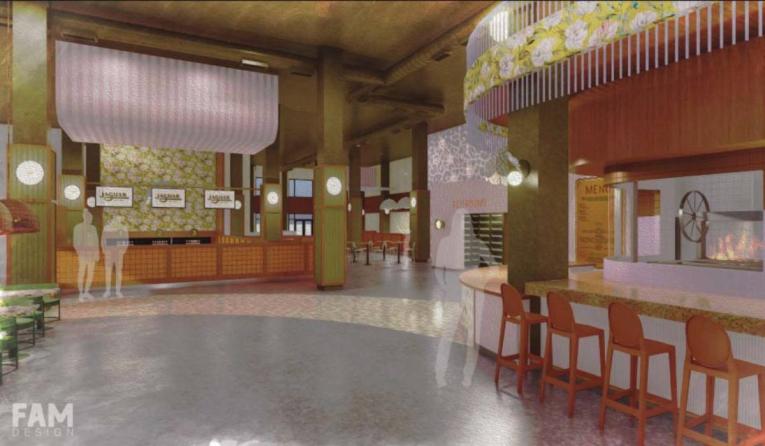 Jaguar Bolera will bring together Southern and Mexican flavors in a food-hall-style format eatertainment box.

There are a few reasons for this approach, he adds. One is what Thompson refers to as “surge moments,” which is something large eatertainment complexes have historically grappled with. There are peak blocks where 500 or 600 guests walk through the hour.

“And when you’re doing full service,” Thompson says, “it’s almost impossible to provide quality full service to a guest when you have that kind of a surge.”

The second driver was labor margin. It’s no industry secret counter service enjoys a simpler labor model than sit-down brands. “We’re losing tip credit across the country, right? So our waiters are no longer $2 to $5 an hour employees,” Thompson says. “So to be able to eliminate some of those folks, set all this up in a more service friendly environment that can handle higher volumes at once, is really what—for me—when I stood back and I looked at the larger picture, it felt like a no-brainer to move to this type of service model.”

Yet true to Thompson’s DNA, there will be cocktail service and bars across every venue. And the food—a wood-fired marriage of Southern and Mexican cuisines—will stand apart. One of the defining traits of Punch Bowl Social was the fact food and beverage accounted for 89 percent of revenue. Games, as Thompson once said, were the “cheese in the mousetrap” to bring customers in. It gave millennials what they were asking for—experiential service with the same quality of food and drink they sought in daily restaurant choices.

The key change here is food gets paid through the queue, which allows guests flexibility to roam throughout the facility.

One thing that Dave & Buster’s (taco truck pilot, cart service) have found in recent years is guests don’t always want to stop activities to dine. And this model enables that, Thompson says. 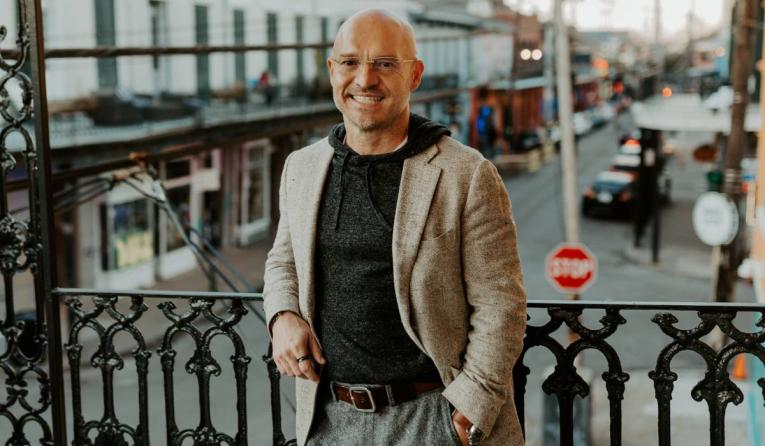 Thompson describes the concept’s design as “deconstructed Southern grandma on her way to the social club.”

In terms of what customers will be doing, “Bolera” in Spanish translates to “bowling alley.” But Jaguar Bolera will stick to the duckpin style, which Thompson moved to a couple of years ago. Imagine full-length lanes, just with smaller pins, a smaller ball, and you get three throws each turn versus two.

The concept will also emphasize “maker-tainment,” as Thompson puts it. Activities where customers sign up for everything from cooking classes to fashion seminars to needlepoint. Essentially, anything where Jaguar Bolera can put cocktails and food in their hands and let them socialize. Also, there will be karaoke rooms.

What customers won’t find, though, is a bar/arcade mix. Or putting. Thompson says in 2017 he visited London to study the crop of putting-based brands opening globally. “The data shows that putting has this extraordinarily high trial,” he says. “But it’s not sustainable, and it has negative comps, year-after-year, once the trial period ends.”

In the past, Thompson put putting in some concepts, but as a side dish, never the protein, he says. He won’t try either going forward. In fact, Thompson expects some coming fallout in the sector to open second-generation real estate.

With Jaguar Bolera, Thompson adds it’s important to note it’s not a food hall; just the service format. He chose that moniker since the category doesn’t lack for consumer awareness and guests will understand the aim without the need for education. However, there’s not seven kitchens and seven different menus. People don’t approach a bevy of ordering stations. “It all happens at once place,” Thompson says. “But food hall is a really widely understood term since there’s so many out there.”

Thompson describes the concept’s design as “deconstructed Southern grandma on her way to the social club.” Highly patterned. Spirited. Feminine. “It’s this whole Southern hospitality, and it’s a little weird,” he says.

Despite ample interest, Thompson say he has no plans to roll out 100 Jaguar Boleras. He’ll be selective and focus on premium builds. “We absolutely intend to be best in class,” he says.