Chef Kevin Sbraga is elevating the hot chicken game with Sonny & Sons, which he thinks is tailor-made for the food-hall boom.
Emerging Concepts | September 2019 | Sam Oches

Sonny & Sons dishes hot chicken as a sandwich, tenders, or wings, with sides like crispy potatoes, mac and cheese, collard greens, and coleslaw.

Food halls continue to proliferate across the country, and now one former “Top Chef” winner is hoping to leverage their popularity into scaling his fast-casual hot chicken concept.

Philadelphia-based Sbraga—who connected with Crave Food Hall at Discover Park through a consultant and designer working on the project—says the captive college-student audience attracted him to the Purdue food hall, which is part of a luxury apartment building for students and includes nine unique concepts.

“Fifty-five thousand people within two square miles is pretty dense,” he says. “There are pretty limited options in terms of freestanding [restaurants] that are not traditional school dining, that are independent. And students nowadays are demanding better food. You look at the millennials and the next generation, and they want better things.”

The Sonny & Sons menu is simple. Hot chicken is available either as a sandwich ($7.95), tenders ($8.95), or jumbo wings ($9.95), served in hot, mild, or plain profiles. Sides are mac and cheese, collard greens, crispy potatoes, and coleslaw, and guests can also order a half bird with choice of side for $14.95.

“It’s embracing the idea of comfort food and putting a little twist on it,” Sbraga says. 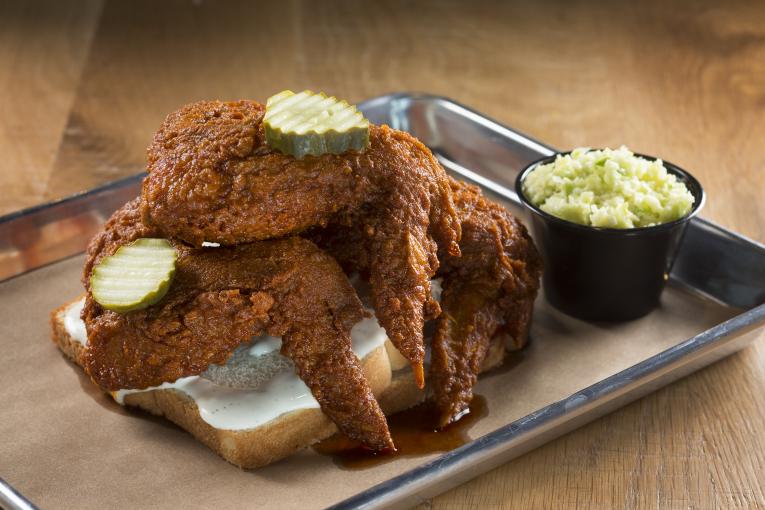 Sbraga burst onto the national dining scene by winning “Top Chef” in 2010 and then opening the lauded restaurant Sbraga in Philadelphia in 2011. He opened two other full-service restaurants—The Fat Ham and Juniper Commons—in Philadelphia and also expanded to Jacksonville, Florida, with Sbraga & Company in 2015.

But Sbraga acknowledges he didn’t have the bandwidth to scale full-service concepts; all four of those restaurants are now closed.

“If I were to do full service again, I feel like I’d only do one restaurant, it would be high-end, it would be what I want it to be, and that’s it. And it would become more about myself and what I want to do with food,” he says. “This is more about cooking great food and giving [customers] what they’re looking for.”

It was a lesson he learned at The Fat Ham, a casual Southern comfort-food concept where the hot chicken offering became such a star of the menu that Sbraga retooled the concept around it.

When an opportunity came up for Sbraga to operate a pop-up in a shipping container at Philadelphia’s Spruce Street Harbor Park in 2016, he chose to do “Little Fat Ham” and crafted a menu around the same hot flavor profiles. Another concept in the park had an exclusive on chicken, so Sbraga dished hot brisket, pulled pork, and fish instead.

The fast-casual nature of Little Fat Ham was an eye-opener for Sbraga.

“I liked the model. The employees had fun cooking the food, the guests enjoyed it, and it was a place where I felt like I could hang out,” he says. “So once that started, I was like, ‘OK, well we have something we can build on.’ That’s where the wheels really started turning.” 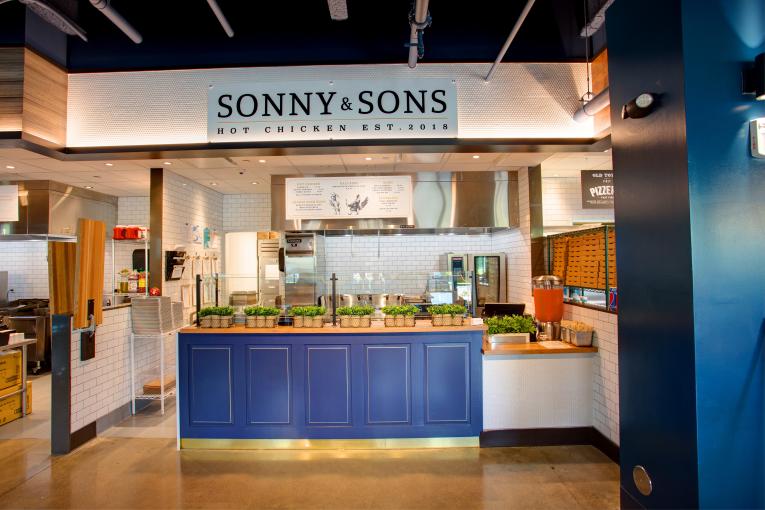 The first Sonny & Sons is located at Crave Food Hall near Purdue University.

Sonny & Sons is named after Sbraga’s late father, while the latter half of the name references Sbraga’s son and his intention to pass the business down through the generations.

The brand logo is an elegant-looking chicken dressed to the nines—an intentional departure, Sbraga says, from the “rustic” and “rugged” branding that’s come to identify other growing hot-chicken concepts.

Crave Food Hall is just one of hundreds of food halls to open in the last few years. A 2018 report from commercial real estate company Cushman & Wakefield found that the number of food halls in the U.S. would go from 70 in 2015 to 300 in 2020.

Sbraga says it’s a tantalizing real estate opportunity for a chef like him hoping to scale a fast-casual brand. “There are a lot of opportunities with a lot of new food halls going up,” he says, noting that he’s had discussions with projects in Denver, Chicago, Miami, Houston, Washington D.C., and Raleigh, North Carolina. “We like the food hall model right now, and I think that’s a great place for us to start.”

It’s a perfect opportunity for a chef hoping to build a counter-service brand that is both elevated and refined. And Sbraga recognizes the opportunity; that’s why he’s perfecting the systems at the Purdue unit so can plug and play at other food halls across the country.