When Red Robin contacted Donatos Pizza roughly two years ago, the Ohio-based brand, understandably, proceeded with some caution. The chain was deep into its own growth prospects and recalled a brief, yet erratic run under the colossal umbrella of McDonald’s Corporation. Donatos, founded in 1963 when Ohio State sophomore Jim Grote bought a small pizza shop in Columbus, Ohio, from a seminarian for $1,300, was acquired by the fast-food giant in 1999. At the time, McDonald’s was exploring life outside burgers. It made an investment in Chipotle a year earlier that helped the fast casual grow from 14 locations to nearly 500 within seven years. It also bought Boston Market in May 2000.

By 2003, though, McDonald’s started divesting itself of ancillary brands and sold Donatos back to Grote and his daughter, Jane Abell. Three years later, after getting its stake to 90 percent, McDonald’s unloaded Chipotle as well. A year after that, Bostom Market was dealt to Sun Capital.

So when Red Robin reached out, “it wasn’t like we were jumping up and down at the beginning,” says Donatos CEO Tom Krouse.

But the reason Red Robin engaged Donatos had little to do with a takeover or anything resembling one. Then-COO Carin Stutz, who is now president and CEO of Native Foods, knew Krouse from their Wendy’s days. She shared a 2017 story about a former pilot Red Robin ran with Round Table Pizza at a store in Greshman, Oregon. The product was well received, but operationally it was muddy. And given leadership flux at the time, Red Robin didn’t pursue the initiative further.

Yet two years ago, Red Robin, then directed by CEO Denny Marie Post, resurfaced pizza and burgers as a potential marriage amid a surging off-premises landscape.

Donatos fit the bill—a legacy brand with cult-like fervor and a reputation for tight operations. In fact, the only real factor holding 166-unit Donatos’ expansion in check was distribution and lofty standards. “We have a high number of unique recipes for our ingredients that are not stock products like a lot of restaurant chains,” Krouse says. “Which is a double-edged sword.”

It meant Doantos wouldn’t grow until quality traits could scale alongside storefronts. “The challenge is, if everything is so custom, you can’t just show up in California, you’ve got to get the product there,” Krouse says.

“That’s really what was holding it back,” he adds. “We were getting lots of inquires about franchising in all parts of the country. And we could only say yes to a fraction of those because we just weren’t able to get there.”

An important trend to note, too, is Donatos guarded expansion closely in recent years as it stressed profitability.

During the McDonald’s era, Donatos expanded to 200 locations but retracted to 182 when Grote regained ownership.

Post, who retired in April 2019, also reached out to Krouse’s wife, Jane, who is the company’s chair.

“The thing is, I have a philosophy that is that answer is yes until there’s a reason to say no, but let’s not start with no,” Krouse says.

The first step, given everything in Donatos’ past, was to familiarize with Red Robin’s organization and culture. Krouse kept checking off boxes as he did so.

The end result, in essence, became a partnership structured as a franchisee agreement. Red Robin nests (not co-brands) Donatos within restaurants and pays a percentage of revenue to the company. “It didn’t necessarily start out that way,” Krouse says. “It started out as just a concept of serving Donatos in the Red Robin.”

A few targets on the table: see if consumers could bridge the gap (was pizza a leap too far?), and could restaurants deliver the product (in-store and out) without bottlenecking operations. One main difference from the Round Table test was Donatos makes its dough in Ohio and ships fresh to restaurants. So Red Robin didn’t have to craft the dough in-house and Donatos could keep the lid on its iconic thin-crust recipe.

Adding Donatos required $30,000 in incremental marketing spend per unit in the first year. There was also a capital cost to the company of $145,000 and pre-opening expense of $20,000 per restaurant. Additionally, in the initial rollout blueprint, Red Robin guided for the second year and beyond, about $45,000 yearly, per restaurant incremental gross margin.

But the investment was plenty worth it, as results would eventually show (more on this shortly).

And for Donatos, Krouse says, tests needed to prove pizza wasn’t holding up service times, which could then lead to a negative customer experience, and, potentially some brand erosion in new markets. “We found the operational execution in terms of time, service time was great,” he says. “And the product ratings were very high. That was probably, obviously, one of our biggest objectives—to make sure that we were producing and they were making the exact same pizza that we make in our restaurants.”

Once these concerns cleared, the companies expanded tests and added marketing, heading to Arizona and Raleigh, North Carolina. “We had a couple of markets, additional markets, that had little to no awareness of who Donatos was. So we could really provide a customer proposition and I think that after we got through that testing period, that’s when we felt we really had something,” Krouse says.

The Donatos portion of the menu features 7-inch, 10-inch and 14-inch options plus a gluten-free 12-inch pizza. Most of the core Donatos pizzas are represented, including the Serious Cheese, Founder’s Favorite, Serious Meat, Very Vegy, and, Edge to Edge Pepperoni. There’s also a Red Robin exclusive Whiskey River BBQ pizza with beef, a pizza-sized take on one of the burger restaurant’s signature sandwiches.

In March 2020, however, COVID-19 forced Red Robin to suspend rollout as it temporarily shuttered units and guarded capital at all costs.

This changed in August once Red Robin began to reboot its business. Forty-eight Red Robins added Donatos prior to the pandemic, and those stores consistently outperformed restaurants without it from a comp-sales standpoint by about 700 basis points.

Naturally, the company was eager to get back on the pizza trail, with CEO Paul Murphy calling Donatos a “compelling return on investment.” Not to mention, the prospect of adding a highly incremental delivery channel with pizza—the darling product of COVID-19.

Just imagine this dynamic, which has become common place for sit-down chains the past nine or so months: off-premises sales at Red Robin jumped 208.7 percent, year-over-year, to 63.8 percent of total food and beverage business in Q2. Just the previous quarter, it mixed 26.3 percent of the business. Pre-pandemic, 14 percent.

So when November arrived, it was hardly surprising to see Donatos spread to 31 more Red Robins in the Seattle market. The chain announced it planned to bring the menu to about 120 locations in 2021. In late Q3, Red Robin virtually trained teams to prepare Donatos products and placed already purchased equipment in Pacific Northwest Locations. At that point, 79 total Red Robins in five states featured Donatos.

Said Murphy of the add, a “proven growth catalyst both top and bottom line, which we’ll bring to bear on the business over the next two to three years.” 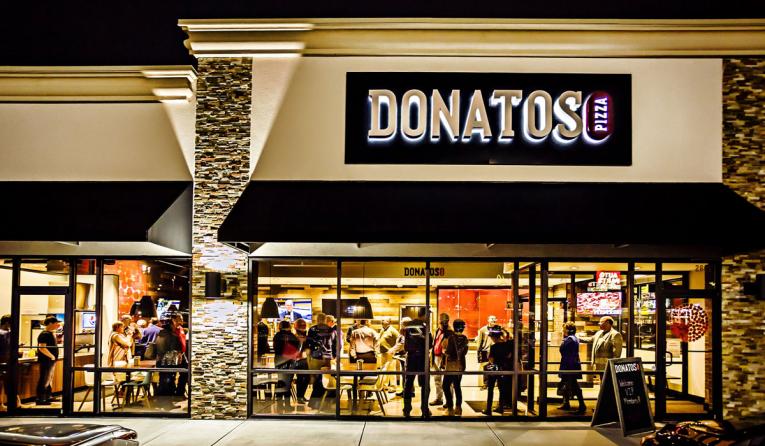 Donatos hasn't lacked for franchisee interest. It's simply been methodical in how it grows.

“I think it’s been quite successful considering the barriers that we’re dealing with right now,” Krouse says.

And like Red Robin, he expects next year to bear even more results. “I think when you put the full effort of a full-year marketing campaign, they’ve been able to optimize a lot of their off-premises tactics thanks to the pandemic, once you get through that I think it’s going to be incredible, really,” he says.

One surprise, Krouse adds, came inside restaurants. People ordered 10-inch pizzas as appetizers, “which we hadn’t really foreseen that,” he says. Also, guests bought pizzas for take-home after their meal. “So you combine that with the pandemic really bringing the focus to off-premises and I think coming out of this we should be even stronger than we were before,” he says.

While pizza’s benefit for Red Robin is clear—support the family target, cross the bridge into stronger off-premises business—what was the lure for Donatos? Beyond the revenue from licensing, the regional chain believes it can drive awareness, trial, and customer demand without stressing that supply and operator system it protects so closely.

A good test with this, Krouse says, was the fact they’ve received “hundreds and hundreds” of emails and letters from customers expressing appreciation for the new avenue to get Donatos. Historically, the brand enjoyed a raving base thanks to its Ohio State University footprint.

“We do have these raving fans, cult-like thing going in markets so the overall broad awareness may not initially be high, but when the word of mouth travels from people who grew up with it or had it when they were at Ohio State, and then they come in and very skeptically by the way, to make sure that it’s actually the same,” he says. “… [they said in the letters] it’s exactly the way I remember it.”

The business proposition for Doantos is that it allows the chain to expand its footprint, distribution channels, and awareness in parts of the country it’s not known for, or markets it doesn’t currently have stores.

It opened its latest store in Sarasota, Florida, November 5 and has debuted eight locations since April.

This is why the quality portion of Red Robin’s tests were so important. Like how a ghost kitchen could seed a market for potential demand and lead to future physical infrastructure, Donatos could have the potential to drive this awareness into something much bigger if results back it.

Krouse says the brand has marketing plans for next year to run parallel to Red Robin’s rollout.

"Our partnership is bigger than just the complement of pizza and burgers,” he said. “Culturally we are very aligned with a focus on people and product. And with pizza and burgers the top two most ordered restaurant fare, it’s amazing these two strategies have never successfully intersected before. But this has been a real game changer for the both of us.”