The burger chain has led the pack for seven straight years.

Employee Management | August 24, 2022 | Danny Klein
Adobe Stock
According to Glassdoor reviews, In-N-Out is paying hourly employees and GMs more, and earning recognition across the board.

In the summer of 2019, Chipotle’s chief restaurant officer, Scott Boatwright, referred to the labor landscape as a “talent crisis.” The pool had, for the first time in his career, or lifetime for that matter, surpassed a mark where there were more jobs than people to fill those roles. And so, while a celebratory milestone for some, it represented a changing reality for restaurants.

One key arena was the makeup itself. The labor force participation rate of teens had stagnated. A year earlier, the Bureau of Labor Statistics found 1.7 million teens worked in restaurants—the same number as 2007. Yet over that same span, the number of units jumped close to 16 percent.

The overall math was easy to crunch: In March 2019, the National Restaurant Association pegged the number of hospitality vacancies at a million. With the national unemployment rate sub-4 percent (it was 3.6 percent) that May, Boatwright’s point resonated.

So how has this resurfaced in the crosshairs of a pandemic rebound? Restaurants are staring down a field that added 74,100 jobs in July and now boasts 11.7 million people. While upward, it’s still more than 600,000 jobs short of February 2020. The unemployment rate, nationwide, was 3.5 percent. The BLS estimated hourly restaurant wages had climbed at a double-digit pace since April 2021 before retracting to 9 percent in June. Average hourly earnings actually fell in July for the first time since May 2020 (negative 0.16 percent). Still, they’re roughly 8 percent above year-over-year levels.

Enough time has passed where these data sets point to a lasting vision. In June 2022, there were 1.304 million job openings in the accomodation and food services field and 1.004 million hires. There were 918,000 separations.

When you couple wage bumps with commodity pressures, the result is a restaurant world where menu prices are increasing at the fastest clip since 1981. They surged 7.6 percent in July compared to the prior-year period, a slight deceleration from June's 40-year high. Full-service meal prices climbed 8.9 percent and quick service 7.2 percent. Something that’s insulated restaurants is the food at home index soared 13.1 percent in the past 12 months, the largest yearly hike since the period ending March 1979.

All told, however, the pressing labor challenge returns to Boatwright’s 2019 descriptor. Has the “talent crisis” accentuated in light of recent workforce evolutions? The not-so-simple answer is yes. Restaurants have fewer workers to pick from and smaller staffs to operate with. They’re paying more to hire and more to retain, from bonus structures to enhanced benefits. So the ability to win the so-called “war for talent” is as much a differentiator today as it’s ever been, if not more so.

Sharon Zackfia, head of William Blair’s equity research consumer group, releases a yearly longitudinal analysis of restaurant employee satisfaction. This iteration, which dates back to 2015, pulled more than 350,000 Glassdoor reviews for more than 90 restaurant concepts to get a sense of which brands might be separating themselves.

To start with some high-level notes, average employee ratings declined from 2021, when workers seemed to be giving restaurants more credit than usual for their efforts to staff back in COVID’s initial wake. They remain, however, above 2019 levels (36 percent higher). Overall and subcategory ratings are nearly unilaterally better than pre-COVID marks, with 92 percent higher than 2019 numbers. Put differently, the restaurant industry is a better employer today than it was before the crisis. Or at least workers appear to think so.

Higher pay also did not necessarily key employee satisfaction, as charts throughout this study will show. Despite wages climbing quickly, as noted, the correlation between compensation/benefits and employees’ overall ratings of the restaurants they work for was the lowest of the six measured attributes (others include culture/values, career opportunities, work/life balance, senior management, and diversity/inclusion). Additionally, compensation/benefits represented the only attribute for which the link with employee satisfaction was markedly lower than pre-COVID, with a 70 percent correlation to overall employee satisfaction versus 74 percent in 2019 and 80 percent-plus in 2016/2017.

“Instead, our analysis continues to suggest that qualitative attributes such as culture/values, senior management, and diversity/inclusion are much more important determinants of employee satisfaction, with correlations of 91, 90, and 87 percent, respectively, and with all three trending upward over the past two years,” the company said. “As a result, we believe that restaurants need to reexamine ways to highlight or alter the less tangible parts of their businesses to better align with the softer [and stickier] attributes that lead to higher employee satisfaction.”

Before getting into the data, it is worth noting that Glassdoor does not authenticate reviews. And generally, voluntary reviews can skew extreme positive or negative thanks to selection bias. The number of reviews varies as well by brand and there isn’t a vetting process to figure whether an employee is telling the truth or not. Despite this, William Blair says, the stability of concept rankings over time and the stability of the relationships between subcores and restaurant subsectors creates an approach that provides meaningful insights into relative levels of employee satisfaction.

What jumps out about the above chart is the diversity and inclusion metric. In just a year, it’s lifted 26 percentage points, illustrating what a lot of brand initiatives today reflect—that corporate purpose is no longer a perk; it’s a core vital that employees take the temperature of before signing up.

But let’s get into pay.

And for GMs on an annual basis

As William Blair explains, within each subsector, there was a notable difference in the magnitude of wage increases between companies that paid above-average versus below-average rates in 2021, with nearly across-the-board above-average wage jumps for hourly crew at concepts that ranked below average in pay last year.

In regard to GMs in quick service, salaries at below-average concepts rose more than twice as quickly as those with above-average managerial salaries. The gap industrywide is tightening.

Regional footprints play a role in the below breakdown, especially in the case of California-housed In-N-Out. Overall, relative wages for the category’s hourly employees rose 16 percent in 2022. Striking here is the lack of parity. You can only stand out so much on wages in the quick-service industry’s present scenario.

Also keep in mind this is what employees are sharing on Glassdoor, not what the restaurants themselves are reporting. Bartaco, for instance, told QSR its GM pay is "$25,000" above what Glassdoor is suggesting.

William Blair’s report measures a net promoter score from a labor angle. Essentially, the percentage of employees who would recommend their job to a friend. There’s a lot of stability in this exhibit. “When companies get the foundational intangibles right, the reward is often manifested in multiple years of top-ranked NPS,” the company said. It’s one of those 1,000-foot looks that wears down year-to-year volatility and turns out something with larger implications.

The standout: In-N-Out has topped the list for seven straight years. It’s the only brand to maintain a top-10 ranking every calendar since 2016.

Black Rifle Coffee Company and Dutch Bros. cracked the 2022 top 10—No. 4 and No. 5, respectively—while Shake Shack and Portillo’s were the only chains with sequentially improving scores from elevated 2021 levels. Compared across, nearly half of the restaurants upped in rank, led by Portillo’s, which surged 47 spots to No. 40. 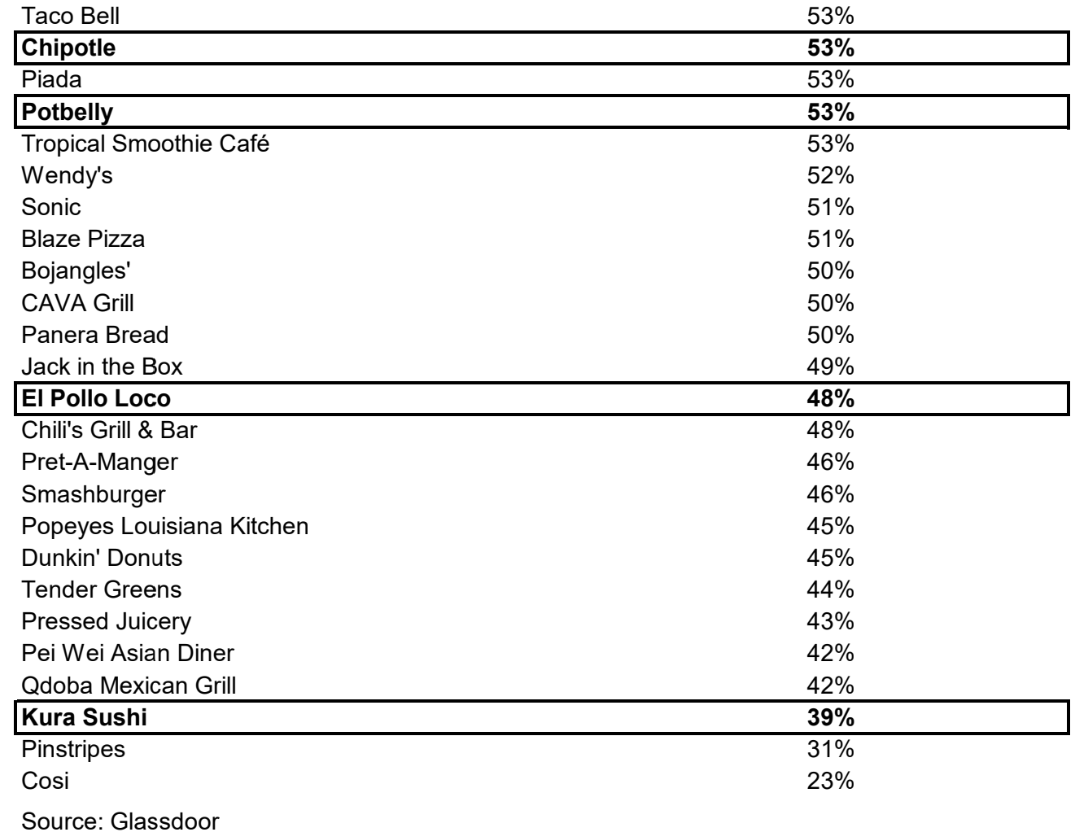 As always, it bears asking what employees are giving restaurants credit for. That crystalizes below. 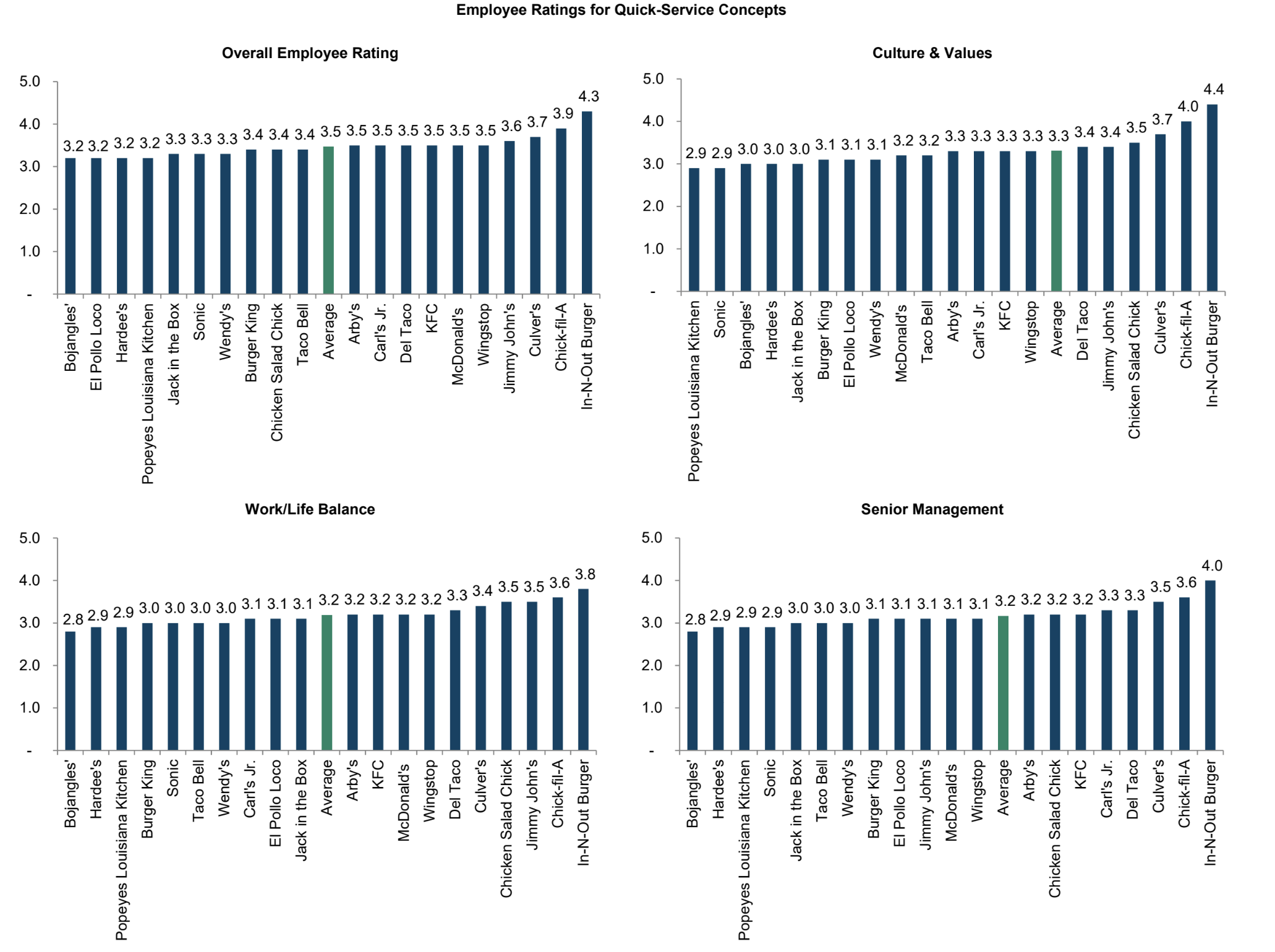 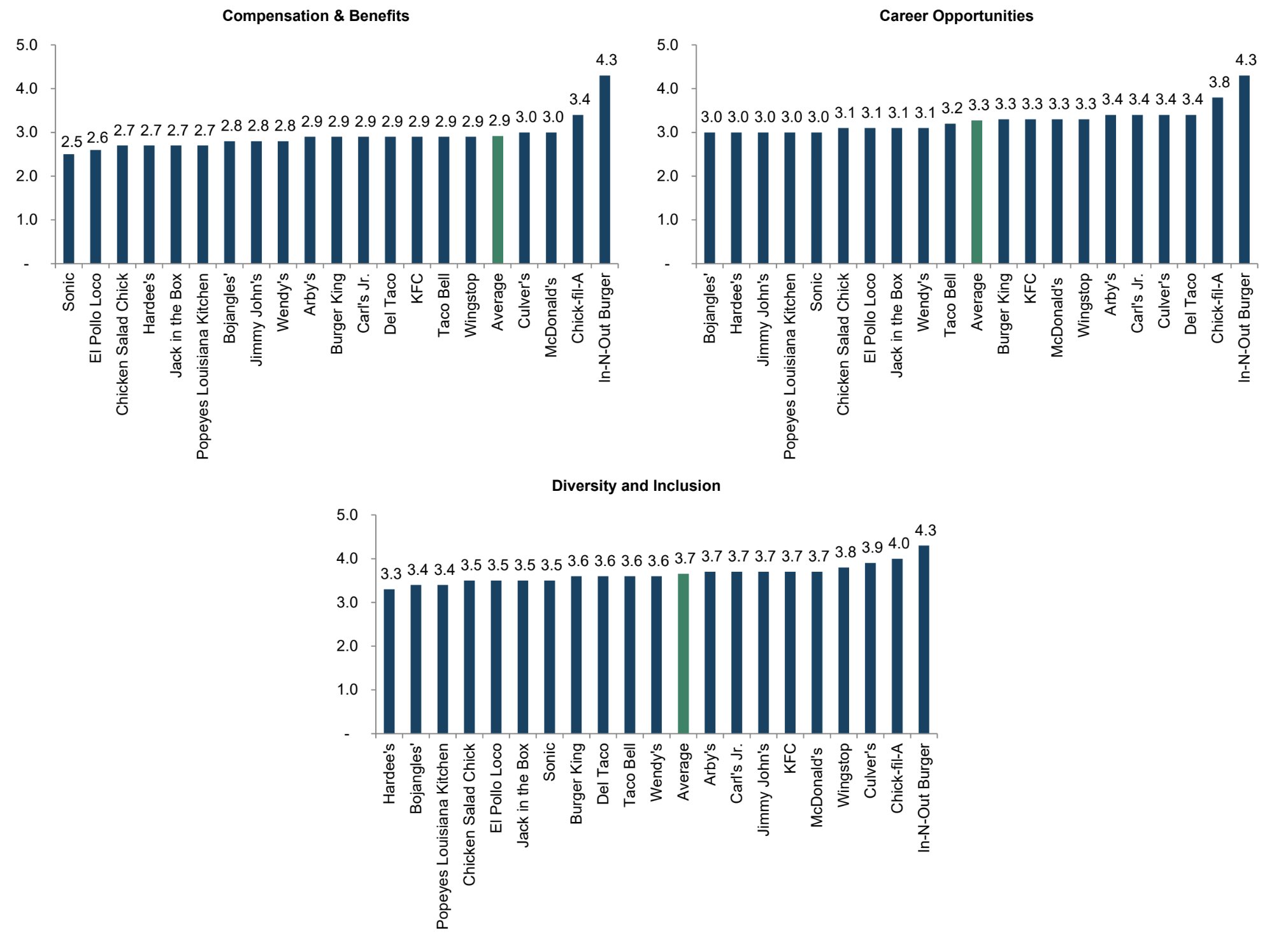 A fast-riser in this year’s study was chicken chain PDQ, a brand founded in 2011 that was the culmination of two years of research from CEO Nick Reader—formerly CFO of the Tampa Bay Buccaneers, the NFL’s youngest at the time—and Bob Basham, cofounder of Outback Steakhouse. Fellow Outback cofounder Tim Gannon, the man credited with creating the Bloomin’ Onion, was also involved in PDQ’s early growth.

PDQ grabbed the top overall spot in the segment for the first time, moving up from No. 7 last year. The brand didn’t lead any single measured attribute, but won on consistency. All of its ratings were above average and were similar or bumped higher on a relative basis for everything but work/life balance.

And onto the ratings: 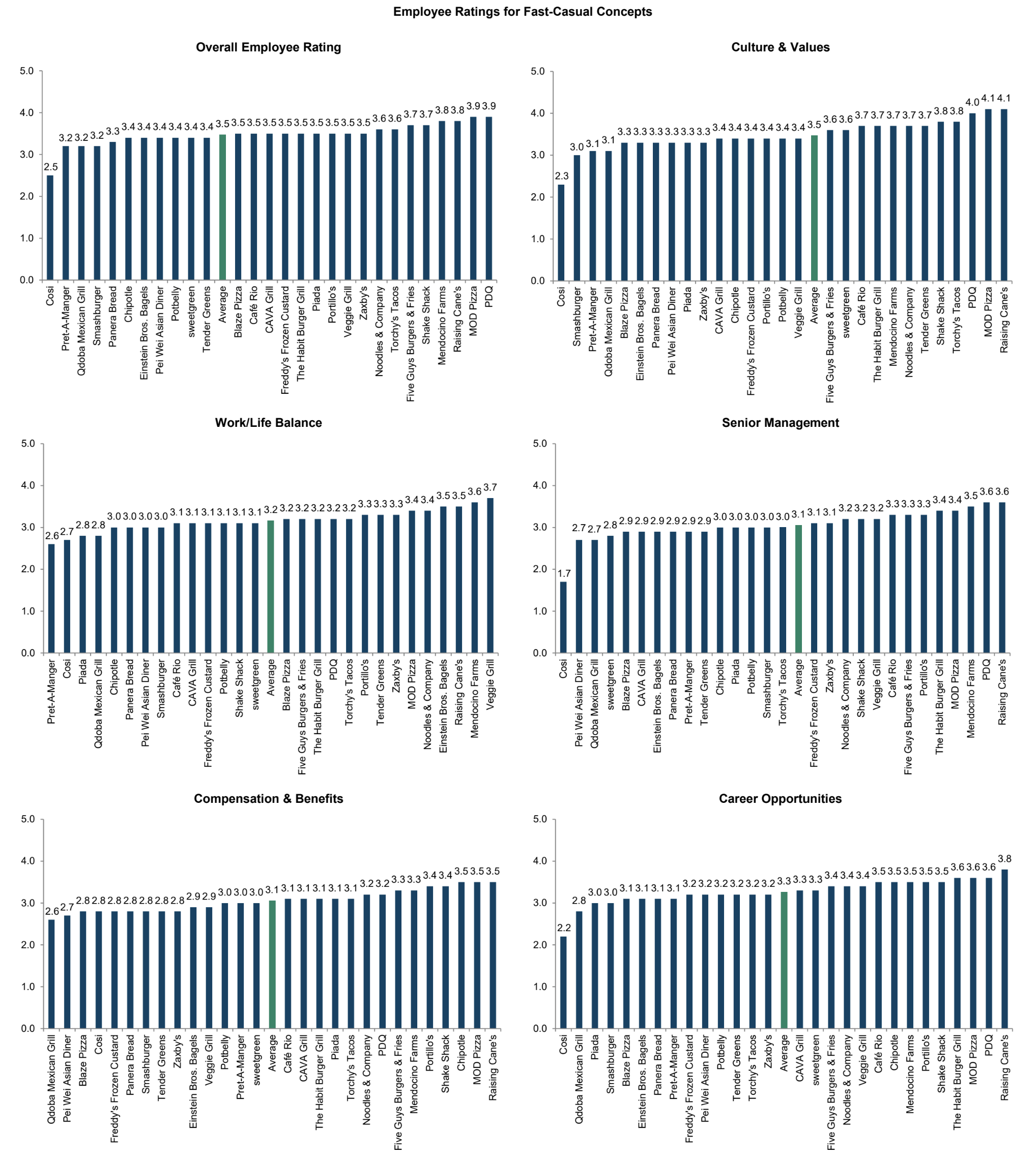 Dutch Bros.’ employee proposition came to light in its recent quarterly recap, too. The brand’s tailing 12-month shop-level turnover was 66 percent, well below the industry average, as it entertained 64,000 applicants and hired 3,500. “We're not having any problem hiring good people, and that goes across the system,” CEO Joth Ricci told investors.

For managers, Q2 turnover was in the low double digits, while operator turnover was almost nonexistent. In the past year, Dutch Bros promoted 50 operators. As of June 30, 115 of these employees are running 336 company-run shops, which averages out to 2.9 units per operator.

Hourly wages upped 8 percent in the overall category, per Glassdoor, and diversity/inclusion was the highest average rated subcategory as well. 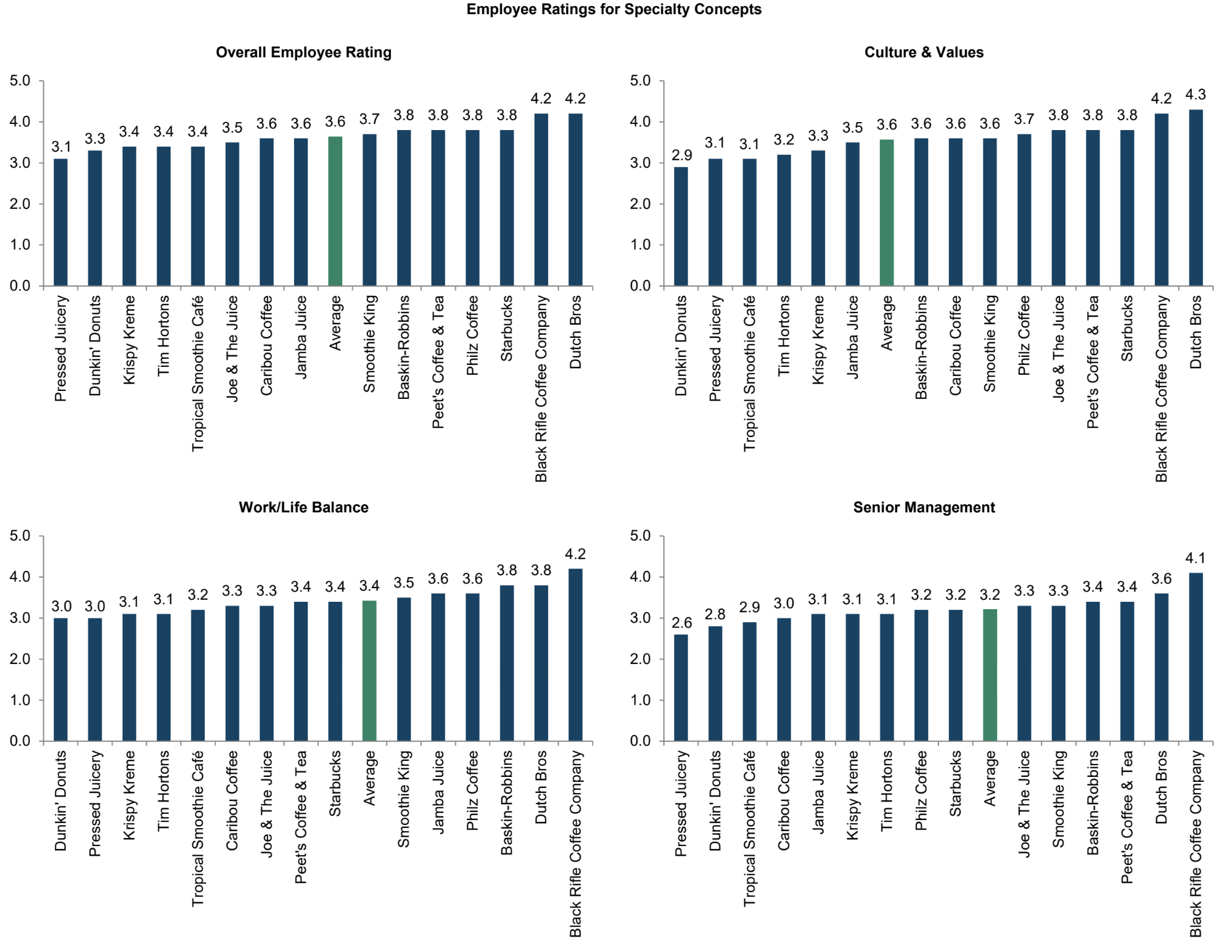 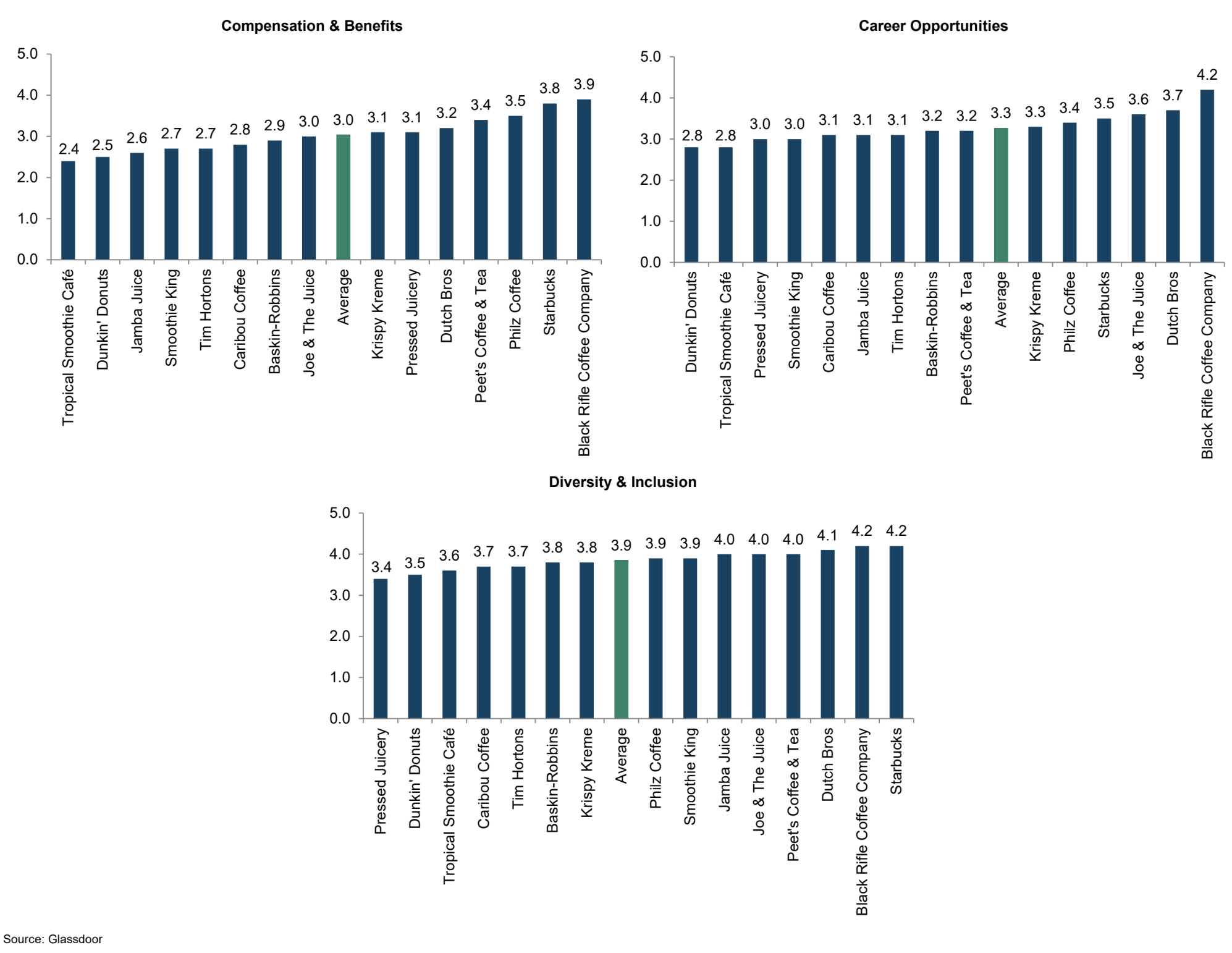 A glance into casual dining

For casual dining, we’ll just take a look at the GM pay and category breakdowns. Hourly compensation is difficult to measure through review sites considering the role of tips. 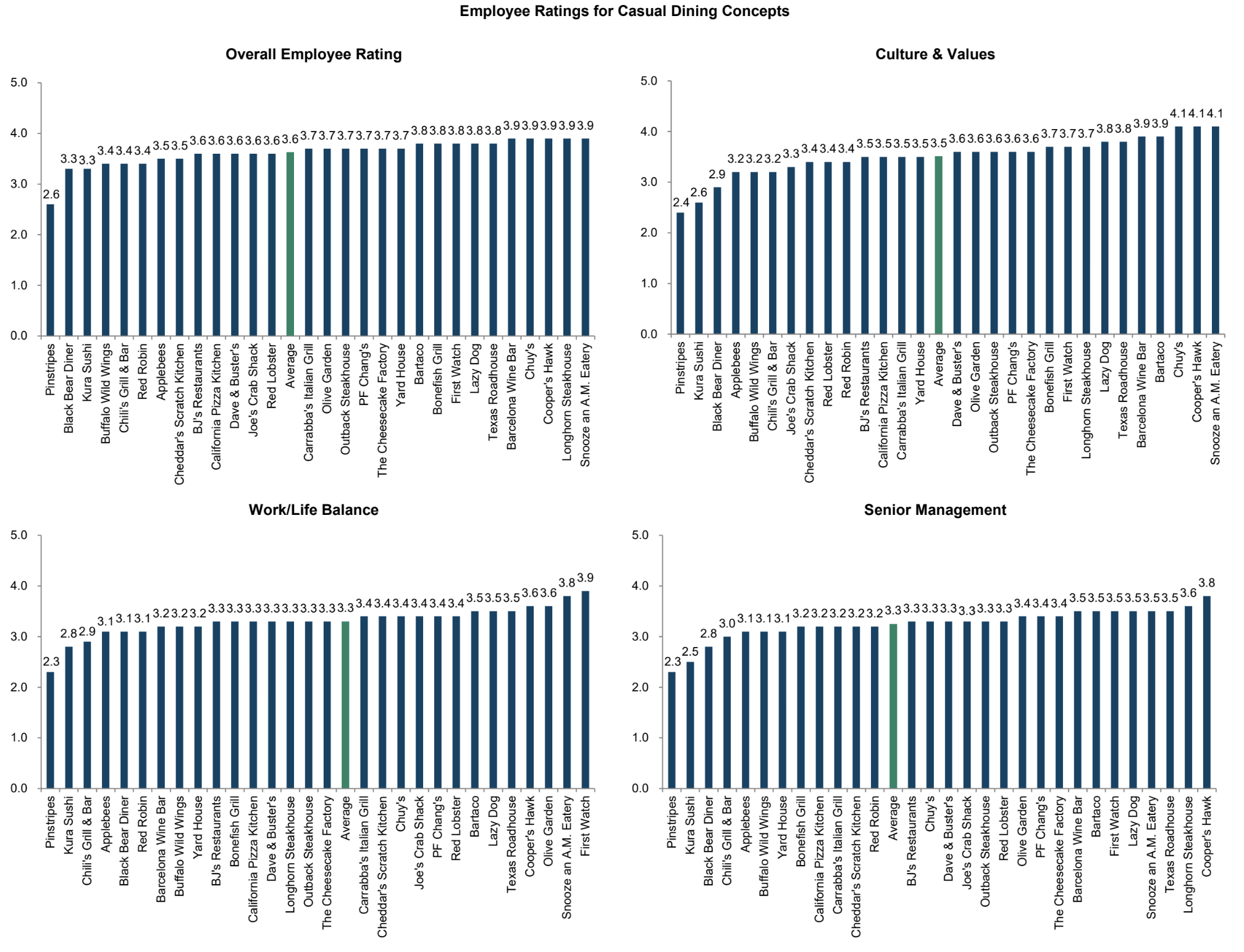 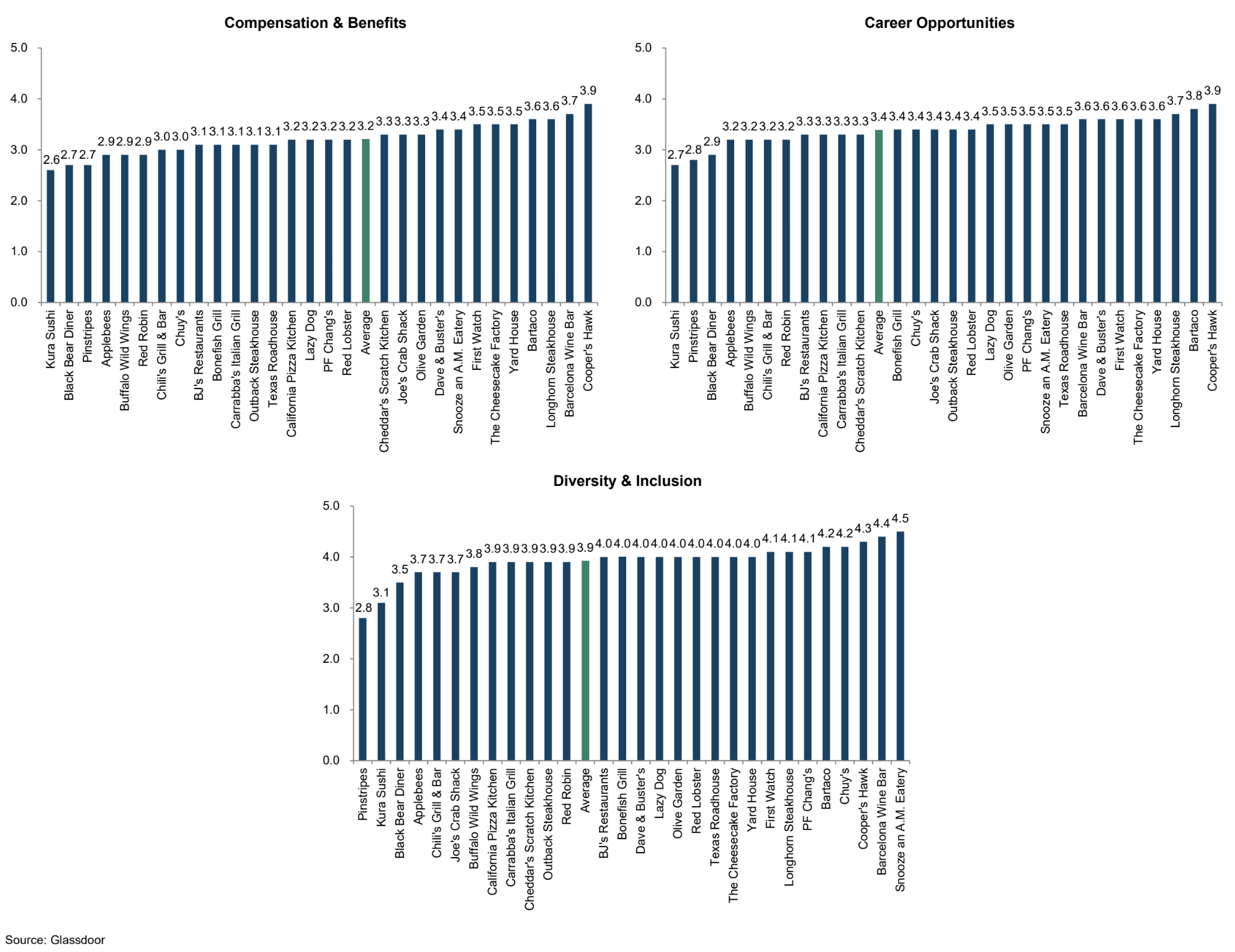