Some fast casuals are boosting their offerings, from internship programs to partnerships with culinary schools.
Employee Management | February 2020 | Barney Wolf

Fast casuals believe an educational investment in employees will not only reduce turnover, but also improve restaurant performance.

In the current tight labor market, as operators are looking for every edge to attract and retain good workers, some are embracing the words of the founding father Benjamin Franklin, who wrote, “An investment in knowledge pays the best interest.”

Fast casuals such as Honeygrow, Hopdoddy Burger Bar, and Tender Greens are looking to use education as a tool, not only to help existing employees grow and become better workers, but also as an enticement for others, especially younger generations, to join and remain with their teams.

“What we see in the current culinary employee shortage is that employers want to have a more knowledgeable workforce that will remain longer” with a company, says Patricia Souza, vice president of career services for Auguste Escoffier School of Culinary Arts.

Earlier this year, Escoffier and Hopdoddy unveiled a partnership that provides access to the schools’ online apprenticeship-model culinary programs to interested Hopdoddy employees working in the brand’s nearly three-dozen units across seven states.

At Philadelphia-based chain Honeygrow, providing an educational component for staff is something founder and CEO Justin Rosenberg says he ponders constantly. The company focuses on teaching skills usually learned in fine-dining restaurants, including gaining knowledge on ingredient sourcing and quality.

“We really want a culture of training and of employees wondering, ‘How can I get better?’” Rosenberg says.

Meanwhile, Tender Greens has developed an educational initiative rooted in a specific social issue. Dubbed the Sustainable Life Program, the program is a six-month paid internship offered to emancipated foster youth interested in the culinary arts.

“If an intern could make it through six months of training at the various stations in our restaurants, and they come halfway and we come halfway, we would love to give them a job as a graduating gift,” says David Dressler, cofounder and chief people officer at Tender Greens.

Some industry experts say culinary education is a good idea for any operator.

“Too few companies are doing it,” says Gary Stibel, founder and chief executive of the New England Consulting Group. “And it’s not just culinary education but human education.” He adds that it’s about teaching employees how to deal with people, both guests and fellow employees, in addition to ingredients and kitchen equipment.

At the same time, chef Thomas J. Delle Donne—assistant dean of culinary relations and special projects at the Johnson & Wales University College of Culinary Arts—says that all potential areas of education are up for grabs, including more niche topics like the sourcing of food.

“Anything beyond just workforce development is good,” he says. 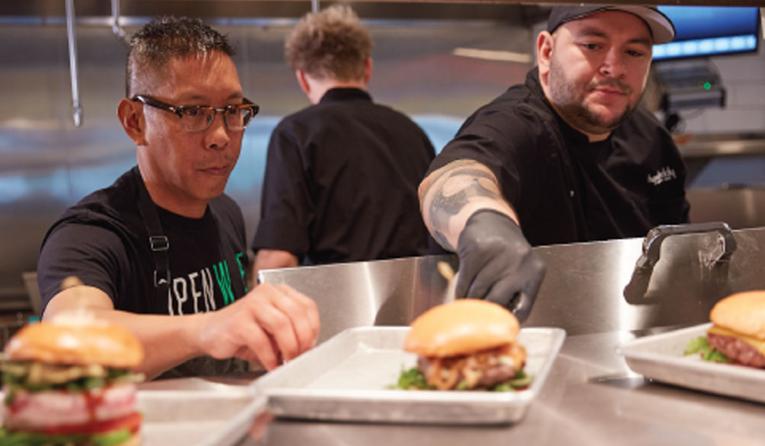 Honeygrow is a more complex Asian concept than some smaller fast casuals, offering stir-fries that can’t be prepared without a set of culinary skills. As a result, kitchen employees learn  everything from the right way to chop (using knives safely) to stir-frying (correctly smoking a wok) to recognizing the best ingredients to use in salads (dark green romaine, for instance).

“We want to make sure we really train these guys and they understand the food,” Rosenberg says.

The work and life skills program at 31-unit chain Tender Greens is offered at its California units only. “When my partners and I were starting the company, we were employing a lot of young high school kids who had many issues at home and for whom we became father figures in many ways,” Dressler says. “It opened our hearts to the concept that Tender Greens would be more than a place to come and work.”

The internship program includes restaurant training, classes, field trips, and workshops. While some of the candidates continue to struggle with challenges in their personal lives, including homelessness, and may need to drop out of the program for one reason or another, at least 30 participants have graduated thus far.

The initiative also provides an opportunity for the restaurant company’s executive chefs—the main managers and supervisors at each restaurant—to grow and mature as they work with the kids, who are atypical hires. “Those relationships become beautiful to see,” Dressler says.

The online culinary program that Hopdoddy—and some other businesses—has with Escoffier for full-time employees includes two 30-week diploma options, each ending with a six-week “externship” working in the industry, including their own work experience at Hopdoddy. Hopdoddy employees pay discounted tuition rates for the program, too.

“We identified Hopdoddy as a progressive company in the industry,” Souza says of the partnership. “We are in a war for talent.”

She says fast casuals, along with quick serves, need to work to retain employees amid significant industry turnover. Providing an educational benefit is a plus, positioning the culinary trade as a career instead of simply a job.

Of course, the hope is that these educational efforts will entice employees to stay with companies. At the same time, though, workers may learn enough through these opportunities that they become more valuable elsewhere, with some even considering furthering their careers at another type of restaurant.

The prospect of employees looking to other futures within the industry is not something that overly concerns professionals.

“The idea is to build up the employees and to allow them a path for success,” Johnson & Wales’ Delle Donne says. “It’s not about keeping them locked up and confined. If I am leaving the nest singing the praises of the company where I worked, and I am on a path to success, imagine what that says to future employees. Anything positive is a fantastic win for the company.”

Rosenberg sums it up best: “If we are doing other things right and the employees are being paid right, we will not worry about them leaving,” he says. “We think if we train them well and treat them well, they will stay.”