The java giant's founder has plenty of work ahead.

Starbucks founder Howard Schultz’s return as CEO hasn’t arrived during a placid stretch. He spent his first week addressing “significant pressures leading to the fracturing of our partner and customer experiences,” Schultz wrote Sunday in a letter. Namely, the fast-gaining energy of a union campaign that surfaced publicly in late August. On Thursday and Friday, Starbucks workers at six upstate New York stores voted to unionize. That upped the total of company locations where employees backed a union to 16.

Thus far, the union—Workers United—has lost just one election. It was also leading by a wide margin at a store in Kansas, per The New York Times, whose votes tallied Friday.

Since the union’s first two victories in December, Starbucks workers at more than 175 other locations across 25 states filed for union elections (there are about 9,000 corporate-run Starbucks in the U.S.). The National Labor Relations Board said it would count ballots in at least three more units this week.

He didn’t mince objectives Sunday, saying his return was intended to “reimagine Starbucks—built on our core values and guiding principles.”

That began with stopping stock repurchases so Starbucks could invest more in employees and locations, he said. “I am not in business … to make every single decision based on the stock price, or the quarter, or EPS, or adding shareholder value at the expense of our people or our customers,” Schultz said last Monday.

Schultz spent the ensuing week meeting with employees via open forums and “collaboration sessions” across the country. In the latter, he posted a board outlining concerns from front-line workers. Among them, how dealing with customers has become more difficult, jobs harder, pay too low, shifts unpredictable, and, broadly from a company angle, “what we say we value and what we do is not lining up.”

Stops included Phoenix, Chicago; Long Beach and San Jose, California. These groups comprised 20–30 partners with chairs arranged in a circle or semicircle. There were no tables or laptops, and each session began with a coffee tasting. Starbucks said feedback will be incorporated into an announcement on May 3. 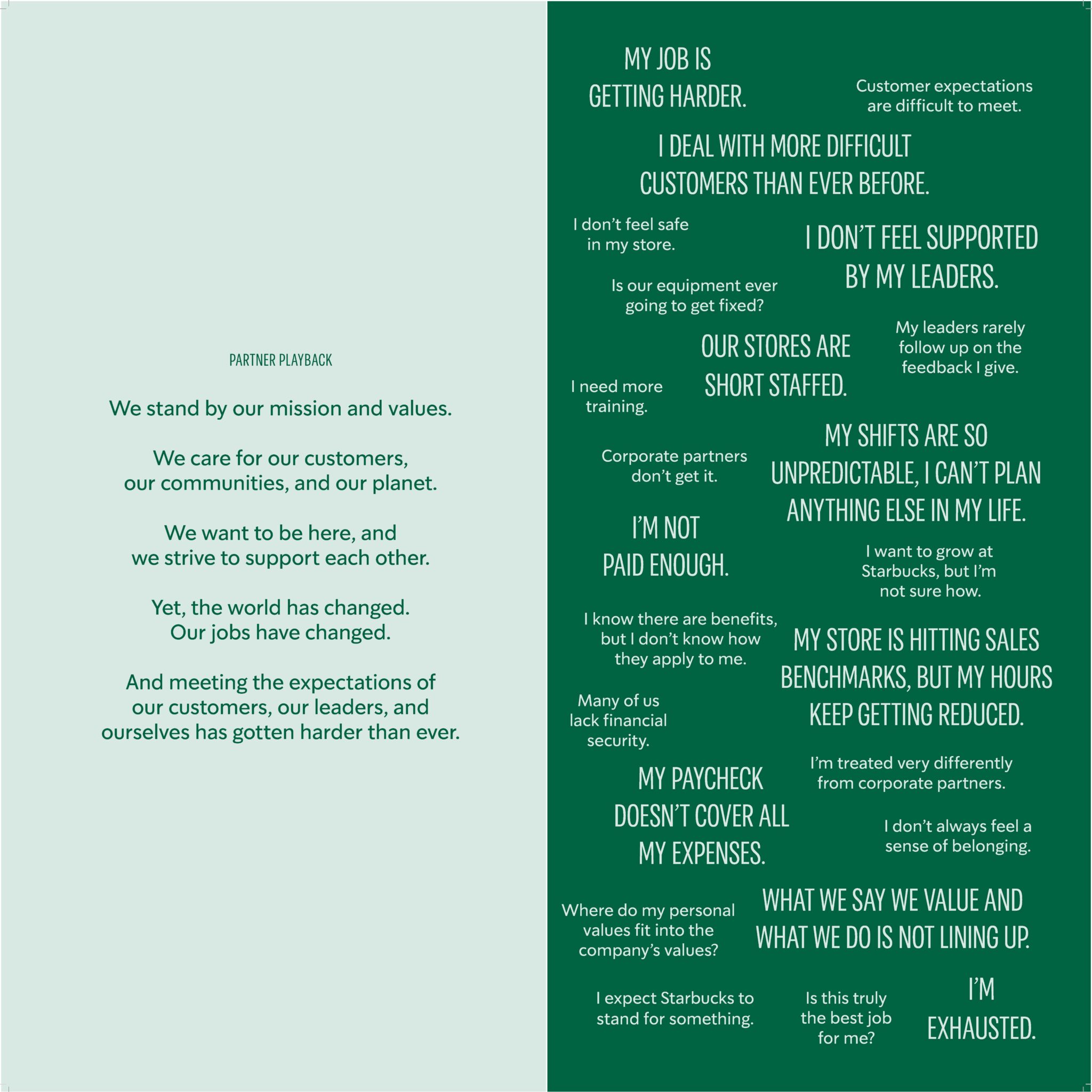 Schultz added Starbucks wants to progress talks “constructively” with employees, but can’t be “distracted by the different vision being put forward by union organizers at some Starbucks stores.”

“And while not all the partners supporting unionization are colluding with outside union forces, the critical point is that I do not believe conflict, division, and dissension—which has been a focus of union organizing—benefits Starbucks or our partners,” he wrote.

These “collaboration sessions” were disrupted by union organizers at times, Schultz shared. “Put simply, the law gives our partners a right to organize, and it also protects the right to work without having a union,” he said.

Schultz added “he’s learned” less than 1 percent of more than 200,000 Starbucks employees in the U.S. voted for unionization. And in elections that took place in Starbucks stores, he said, roughly 65 percent of employees chose to abstain.

“Going forward it will be important for all of you to recognize that outside labor unions are attempting to sell a very different view of what Starbucks should be,” he wrote, addressing employees. “In stores where any union election occurs, it is important for all partners to have a voice—by voting—because otherwise these important rights may be dictated by what a minority of partners actually support.

Starbucks created a FAQ page regarding the union development. Including an explanation on what changes Workers United could make: “Voting for Workers United will not automatically change your pay and benefits or how we operate in any way. Voting in Workers United only gives the union negotiators the right to ask for changes to be made. Starbucks would have to agree to make any changes in negotiations," Starbucks said.

Also: “If voted in, Workers United represents the partners and Starbucks would be prohibited by law from directly dealing with partners over their terms and conditions of employment. Under the National Labor Relations Act, Workers United would become your ‘exclusive bargaining representative’ and you’d have to rely on them to speak for you on important issues. Without a union, you can speak for yourself, directly to your leaders and support partners.”

Starbucks claimed it’s never separated an employee for organizing, “and we wouldn’t.” It recently investigated “several potential safety and security violations at a store in Memphis.” This was a location where Starbucks fired seven employees for alleged policy violations. Workers claimed it was retaliation for organizing, per Eater.

“Our investigation revealed partners failed to maintain a secure work environment when they opened a closed store after hours, without permission, to hold a private event,” Starbucks said. “They also opened the closed store to non-partners and these unauthorized individuals were allowed behind the line and in the back of house while leaving the unlocked door unattended.”

Anybody who is not a Starbucks employee, and those who are not scheduled to work, are, according to policy, not allowed access to stores when they’re closed. “We also learned that a partner opened the store safe when the partner was not the designated cash controller. Given these serious violations [though there were additional safety and security violations], several of the partners involved are no longer with Starbucks. Out of respect for their privacy, we will not go into further detail here,” the company said.

According to The Times, Starbucks has sent senior officials to stores in certain cases, a move it said was intended to address operational issues like staffing and training. Yet some union supporters argued they found the visits intimidating. The union also accused Starbucks of looking to cut back hours nationally as a way to encourage longtime employees to leave the company and replace them with workers who aren’t as interested in unionizing, The Times reported. In March, the labor board issued a formal complaint against Starbucks for retaliating against two Arizona employees, a step it generally takes after finding merit in accusations against employers or unions.

Starbucks denied the claims and said it schedules hours to meet customer demand.

Per The Times, Schultz’s appointment was seen by a collection of investors as a chance to shift union posture. But Starbucks shortly announced thereafter it would not agree to stay neutral in elections. On Schultz’s first day, the company fired Laila Dalton, one of the two Arizona workers the NLRB accused Starbucks of retaliating against. Starbucks said Dalton violated company policy by recording co-workers’ conversations without their permission.

Repairing these rifts isn’t going to be as simple as raising wages, Schultz said Sunday.

“As one long-standing store manager said to me: ‘With 80 percent of baristas being partners less than a year, we have to do better to teach and share how we started and why we do what we do while better supporting each and every partner,’” he said.

The company announced two quarters ago it planned to write a $1 billion check to boost employee pay—a directive that would unfold in stages: By summer 2022, the company expects to offer a starting wage of at least $15 per hour for store-level workers, making good on a promise from December 2020. Come January, employees with two or more years tenure will receive up to a 5 percent raise and those with five or more years will see wages lift 10 percent. Overall, Starbucks said hourly U.S. employees are set to make an average of nearly $17 an hour with baristas taking in $15–$23.

“We have to reimagine the customer experience. The third-place environment which has been such a foundational aspect of the Starbucks Experience all over the world is now somewhat confined by the fact that people are not using our stores the same way,” Schultz said. “And so, all those stores that we have that have big lobbies, they may not be as relevant tomorrow as they have been in the past. We have to redefine, redesign our store experience.”

Starbucks is working on a new coffee blend “by and for green apron partners,” digital innovation through NFTs, and the continued evolution of employee benefits, it added. Details are expected in the coming weeks.

“All I ask of you is to embrace, not a standard of mediocrity, but embrace every step of the way, a standard of excellence,” he said in an internal announcement. “… And let’s honor everything that Starbucks has stood for for 50 years. And I promise you we’re going to come out of here like a goddamn tidal wave.”

From a financial view, Starbucks has faced mixed trends of late. The company delivered record Q1 revenue of $8.1 billion as U.S. same-store sales climbed 18 percent, including a 12 percent increase in transactions.

However, it’s grappled with staffing shortages and “extraordinary cost pressure,” like many chains industry-wide. While operating margins lifted to 14.6 percent from 13.5 percent in Q1, the figure missed company expectations and resulted in Starbucks guiding lower profits for the remainder of the calendar. In all, the chain projected Omicron’s setback—which triggered staffing shortages in the supply chain and higher distribution and transportation costs in response, as well as lofty isolation pay given higher callouts— to drag margins by roughly 200 basis points. Starbucks took pricing action in October and this past January, additional hikes are expected through the balance of 2022.

The company’s spending patterns have reflected external trends, too. Cold beverages now account for 70 percent of Starbucks’ beverage transactions as mobility shifts in the wake of COVID and busted routines. Mobile order and pay, drive-thru, and delivery accounted for more than 70 percent of Starbucks sales in Q1. Drive-thrus posted their fourth straight period of double-digit comps growth.

Additionally, 53 percent of Q1 U.S. spend in company-operated stores flowed through Starbucks Rewards members, with the company’s 90-day active membership reaching 26.4 million—21 percent higher than this time last year. In just that period, Starbucks tacked on 1.6 million members, a cohort that, on average, visits the brand triple the number of non-rewards users. The chain saw Starbucks Card activations and reloads in excess of $3 billion, also a high mark in brand history.

Speaking to Schultz’s earlier observation about training, Starbucks said in Q4 70 percent of its hourly employees were new to the brand. It’s adjusted labor models and store hours at times to address hurdles, and is also continuing to work on efficiencies, like reducing low-volume SKUs, as it did during the first COVID surge, and adding equipment, like warming ovens, cold brew systems, and Mastrena 2 machines.

“We’re going to do everything we can to ensure the fact that our partners understand the most important elements of everything Starbucks has done and will do is elevating the partner experience,” Schultz said, referring back to unions. “And my job in coming back to Starbucks, is to ensure the fact that we, the collective we, co-create, reimagine a new Starbucks with our partners at the center of it all. As a pro-partner company. A company that does not need someone in between us and our people.”

At an open forum on April 4, speaking to 15 employees, Schultz said Starbucks needs to reexamine the environment in stores, “the joy, “the sense of community,” and “fulfillment.”

“[Our partners] have done Herculean things over the last few years. As much as we’ve tried to do, we haven’t done enough. That’s an admission, we have to tell the truth. We will, I promise, do better for our partners,” he said. “They’re counting us out. But Starbucks best days are ahead of us. I promise you. Write it down.”