Subway is also still looking for a permanent CEO.

For the second time in less than a month, a Subway executive is leaving the world’s largest restaurant chain. James Walker, the brand’s vice president of North America, resigned January 18, effective immediately, the company confirmed to multiple outlets.

Walker formerly served as president of Johnny Rockets and CDO of Beef ‘O’ Brady’s and The Brass Tap. He was promoted to head Subway’s North American operations less than a year ago, and his resignation comes about two years from being named VP of development.

Subway is also still searching for a permanent chief executive following the May announcement that Suzanne Greco would step aside from day-to-day duties and officially retire in June. Trevor Haynes, the 44,000-unit chain’s chief business development officer who joined the company in 2016, has been serving as interim CEO. Greco took the reins as CEO in 2015 following the death of her brother and Subway founder, Fred DeLuca.

Subway trimmed its U.S. unit count by 866 restaurants from 2016–2017 and 359 from 2015–17 after adding 4,445 stores the previous six years combined. According to the New York Post, which cited a “source close to Subway headquarters” the chain’s 25,000 or so U.S. restaurants had flat or slightly declining same-store sales in “most of the country” last year. The New York Post also reports, from a November 2017 internal memo it reviewed, traffic dropped 25 percent from 2012–2017. 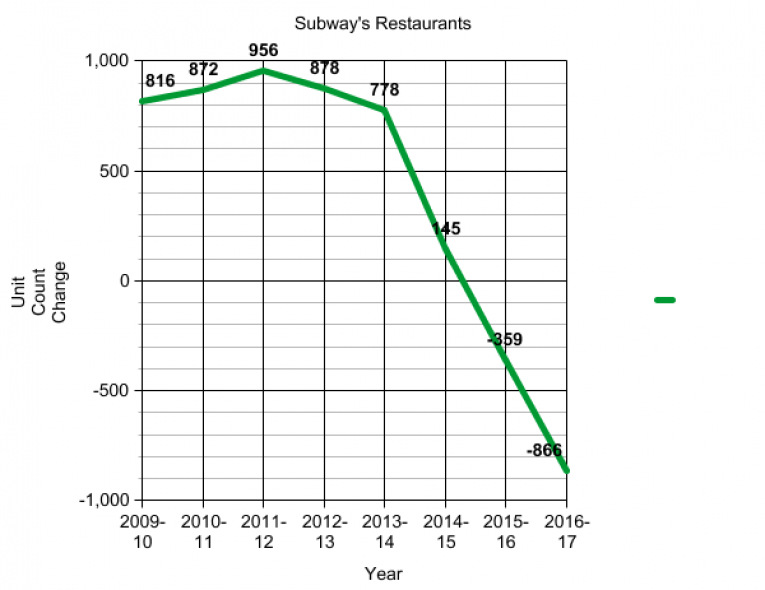 Subway's unit count has been on the decline in recent years as it looks to remodels and fresh designs to boost performance.

Subway’s “Fresh Forward” revamp, which hit the marketplace in 2017, has returned some early positives. Subway said, a year later, it saw a gross profit lift of 11 percent and increased traffic around 8 percent in its remodeled units. In addition to the hike seen at refreshed stores, Subway noted that in Fresh Forward designs at relocated restaurants versus remodels, it saw an even steeper increase in sales and traffic—about 18 percent and 15 percent, respectively.

Subway added in November that its newly design app achieved year-over-year growth of 100 percent in users and was increasing 25 percent, month-over-month, since a May update.

Tripodi started with Subway in late 2015 after leading the marketing efforts at Coca-Cola. He replaced Tony Pace and guided Subway through a tumultuous time. It was soon after the death of DeLuca and just as Subway was looking to separate itself from former spokesman Jared Fogle, who pled guilt to possessing child pornography and for paying for sex with minors. He’s serving a 15-year, 8-month sentence.

In an interview with Marketing Week, Tripoldi said, “This was one of the most challenging jobs I've ever had because it was a privately held company that had lived in a little bit of isolation for many years, so I had to drive some significant transformation.”