2019 Will be a Game-Changer for Church's Chicken

Q&A with Church's new VP of digital marketing and technology.

Church’s turnaround was showing even better top-line results on the international side at its sister brand, Texas Chicken, with comps growth of 6-plus percent year-to-date.

And then, just 15 days later, the legacy chain hinted at a branding bombshell. For the second time in company history, Church’s Chicken and Texas Chicken came together. Presenting in front of a standing-room-only crowd at a San Antonio conference center, executives unveiled the first global brand positioning ever at Church’s.

To understand why this happened and what it entails, Tony Moralejo, executive vice president of international for the brands, says you need to consider the history. When Moralejo took over the international responsibilities in August of 2016, he immediately noticed very tangible differences in Church’s domestic and global business. But was the company embracing and leveraging those correctly across its 40 franchisees and 25 international markets? In total, there are more than 1,500 locations generating systemwide sales north of $1 billion. At the end of 2017, Church’s had 1,009 U.S. stores (858 franchised units) and U.S. systemwide sales of $785.96 (in millions).

“Depending on where you go in the world, the Church’s Chicken or Texas Chicken experience is different,” Moralejo says. “And in many ways it was a tale of two brands with different personalities and different voices.”

Not just that—the two brands are in distinctly different stages of their life cycles. The domestic Church’s chain dates back nearly seven decades when George W. Church founded the brand in San Antonio. The international footprint, however, is really in the early stages of its momentum. Many of the stores are in new markets. There’s not a legacy element to grapple with. So while Church’s and Texas Chicken are rooted in similar places, there’s evidence to suggest they should be expressed differently to consumers. And this doesn’t lock into international versus domestic, either. Texas Chickens in Asia and the Middle East are speaking to different audiences as well.

"We never really determined whether the international version of Church’s Chicken should be any different than its U.S. counterpart. And they were. I think we relied on our food, our product. And that was sufficient for us to compete with all the giants, all the larger players in the quick-service space.” — Tony Moralejo, executive vice president of international.

Take this major difference for example: By October, Texas Chicken had introduced more than 70 new limited-time products in that calendar year alone. Domestically, Church’s wasn’t even in the ballpark. Moralejo says there’s a logical and sales-driving explanation. Internationally, Texas Chicken can use LTOs to create reverence locally or regionally. You simply have a wider array of flavors. In Southeast Asia, for example, there’s nine-pepper spice chicken and other promotions that resonate with local customers to drive repeat visits. The core product is viewed as Texas or U.S. inspired and, yes, carries a certain lure, but it helps tapping into the flavors found in guests’ everyday lives as well.

“You want to stick true to your heritage and what you stand for and what your core products are, but then you use the LTO to draw that consumer in who maybe is craving more and more regional flavors,” Moralejo says. “While it doesn’t necessarily need to become part of your menu, you showed that flexibility and local variance to the local palate and you introduced those products, and they do quite well.”

Moralejo says they have international franchisees who execute multiple center-of-the-plate LTOs every month. In the U.S., you may see four to six, perhaps eight LTOs a year.

Returning to the brand positioning, Moralejo couldn’t share exacts just yet. He said a new logo and design are coming to Texas Chicken. Overall it’s going to be a “total brand transformation,” the company said, touching everything from training and recruitment and service delivery to advertising, uniforms, packaging, and product innovation. Virtually all internal and consumer-facing touch points will be impacted.

Moralejo called the initiative a “massive and intensely collaborative effort” that tapped into the insights of franchisees and engaged research, design, and advertising agency minds.

Here's an icon that represents what the new brand positioning will feel like.

On the ground level it boiled down to this: As Texas Chicken started to take off, Moralejo, says, the chain needed to pay attention to and define what each brand stood for.

“We never really determined whether the international version of Church’s Chicken should be any different than its U.S. counterpart. And they were,” he says. “I think we relied on our food, our product. And that was sufficient for us to compete with all the giants, all the larger players in the quick-service space.”

Texas Chicken, though, needed a strategy to differentiate itself further, Moralejo says, if it was going to keep pace. In the spring of 2017, executives began plotting what this would look like. Over the next 18-plus months what started as an international-only initiative morphed into a global plan affecting Church's as well.

On December 4, Church’s announced that Alan Magee, formerly senior director of brand marketing at Moe’s Southwest Grill, was joining the company as its VP of digital marketing and technology. "The decision to bring Alan aboard is tied directly to the rollout of our new global brand positioning," Christina said in a release. "As our brand moves in an increasingly digital direction, we've created this role specifically to address the unique needs, challenges, and opportunities that come with marketing across digital and non-traditional platforms.” 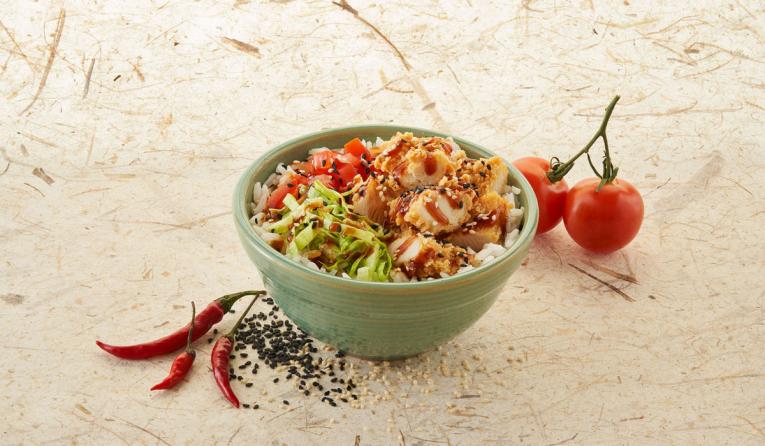 LTOs, like this rice bowl, are much more common internationally than domestically for the company.

He will help define this new positioning, which Moralejo says was designed around three objectives.

The first was identifying the company’s strategy.

Next: establish that vision. Optimize and validate the company’s new brand position. “First create that brand position and then validate it with the consumers that are out there,” he adds.

Lastly, and this is where Church’s and Texas Chicken currently reside—how do you bring it to life now that you’ve got the strategy?

Much of the positioning is inward facing, he adds. Church’s wanted to define how it talks internally.

Outwardly, however, is where it’s a work in progress. Marketing and advertising, “that’s the phase we’re in today,” Moralejo says.

The new image, still yet to be unveiled publicly, was shown to international franchisees in September at the company’s annual summit. By Q1 of 2019, Moralejo says, guests will start seeing new Texas Chicken restaurants reflective of those different positioning elements in the physical building itself—in its messaging, uniforms, packaging, and so forth.

Landing on these changes came down to a multi-phased quantitative and qualitative research project. Texas Chicken studied guests globally to understand as much as possible about their behavior and lifestyles.

“Then we validated that positing by going back to the markets and talking to our guests once again. What did they like about it? What did they not like about? Did they feel that we had a license to do certain things with our brand?” Moralejo says.

They tested until “we had a consumer driven, consumer-validated positioning and image that resonated with all of our guests.” 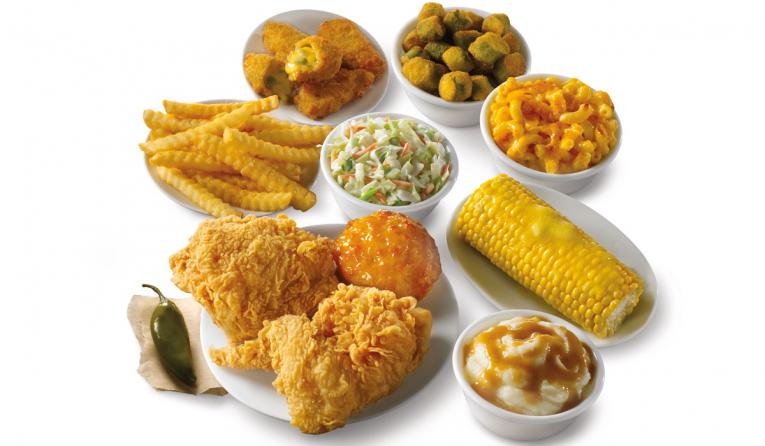 The menus at Church's and Texas Chicken vary by market.

What did the guest tell them?

“We call our positioning territory ‘Texas style.’” Moralejo says. “And customers felt it was a stronger connection and resonated best with their view of our brand. They told us that we stood for quality. We stood for tradition. We were modern. That our food was flavorful. That we had a differentiated product. And all of those things, we’re now in the process of bringing that all to life in our restaurants.”

Moralejo hints that while the old design was Western and traditional, the new is contemporary and resonates a lot broader across key categories in the company’s strategy in terms of who the consumers are that visit Texas Chicken restaurants.

Operationally, the company is looking at changing how it greets guests who walk through the door. What they say to guests as they leave. The messaging over the front door. “All of that is going to change because all of that is going to be filtered through and rooted in our new brand position,” Moralejo says. “Which again, is based on our heritage and our tradition, which has a strong Texas-style element.”

Moralejo adds there isn’t a ton of customer confusion between Church’s and Texas Chicken. Most of the international consumers, unless they’ve travelled to the Southeastern U.S., aren’t familiar with Church’s. Texas Chicken is the quick-service chicken brand they’re used to. The food differs, too.

There is one reason Texas Chicken didn’t need to change, though: performance. Moralejo says the company lacked an integrated, holistic branding strategy. But it’s restaurants overseas were fresh and clean. “This wasn’t an initiative to simply come up with a new image for the sake of having a new image,” he says. “It was preparing ourselves for the next 20 years. And you need to do that. You’ve got a lot of strong, regional players, especially in the fried chicken quick-service space.”

The American, Texas branding carried plenty of weight internationally. Moralejo says researched showed that consumers didn’t view fried chicken as being an imported U.S. food, especially in Asia, where fried chicken has long been a staple of their cuisine. Instead, guests saw it as a U.S. version of fried chicken. “They view it as their cuisine and they’re having another country’s version of it. It’s quite an interesting insight,” Moralejo says.

“We’re going to double down and leverage all of those positive qualities from the name Texas and you’re going to see it play a large role in the overall positioning,” he adds. “And it plays quite a significant role in the image and look and feel of our restaurant, both external and internal.”

Moralejo says he didn’t get much sleep the night before showcasing the transformation to franchisees in San Antonio. The new logo especially, which he says is a “lot more forward looking.”

“We’re really excited about this,” he says. “Internationally, the image isn’t bad. It’s pretty good. It competes. But what better time to change it than when we are performing well and established. We’re setting ourselves up for the future, and we can’t wait for people to see it.”