800 Degrees, Pizza Robots, and the Future of Innovative Growth

The chain plans to grow via streetside stores, ghost kitchens, and robotic kiosks.

When CEO Tommy Lee joined the 15-unit chain in 2017, just under 10 percent of sales came outside the four walls. Within the next few years, the channel exploded to between 30–50 percent. The more off-premises climbed, the more it became clear to Lee and his team further adaption was necessary.

“How do we become more consumer-friendly and guest-friendly for this off-premises need and then the pandemic it?” Lee recalls. “So we've been working through what makes the most sense.”

For 800 Degrees, one of the answers has been Piestro, a fully automated kiosk that is capable of making a pizza in less than three minutes on any street corner. When Piestro CEO Massimo Noja De Marco first approached the pizza brand, the restaurant wasn’t too interested after seeing less-than-stellar results from other products on the market.

De Marco showcased Piestro’s proprietary oven, which becomes hot enough to cook pizza in two to three minutes, but doesn’t overheat in small, enclosed spaces. All of the ingredients are inside the machine. Once an order is placed—which can be digitally scheduled for pickup or ordered in real time via the kiosk’s interactive menu—the robot will proceed to craft the pizza, cut it into slices, and place it in a box. Lee says the most likely scenario is that the box will go into a certain slot, and the customer will receive a code to open said slot, although that part is still a work in progress. A transparent window allows customers to watch their pizza being made.

Lee says once 800 Degrees tinkered with the machine, the culinary team was able to develop a pizza “we’re real proud of.” Satisfied, the brand signed an agreement with Piestro to produce 3,600 kiosks in the next five years, a commercial value of more than $530 million, according to Piestro's website. 800 Degrees will conduct an alpha test this fall and then move to a beta prototype sometime in the late spring to early summer. From there, the company will debug machines and fix aspects that aren’t consistent. By this time next year, the pizza chain hopes to have full production ready. Piestro estimates its kiosk can cut labor costs of a typical pizzeria from 28 to 10 percent, and raise profit margins from 22 to 48 percent.

“The key here is these are not frozen pies that are pre-made that go in the back of the machine,” Lee notes. “These are real, fresh ingredients that go into the machine. You choose what you want, and you choose when you want it. And then when it's ready, it's from fresh ingredients cooked fresh from this new oven that’s inside of the kiosk, and then you get your pizza fresh and hot whenever you want it. 24/7.”

With the robotic kiosk, commissaries won’t be an issue, Lee says. These facilities typically are “money sucks,” that require brands to build several retail establishments around them to break-even, but with this model, brick-and-mortar stores will serve as de facto commissaries and replenish the kiosks.

Lee lays out an example where a franchisee wants to open restaurants in a certain market. Once they are built, the operator would then place kiosks in different places, like in front of a 7-Eleven or inside a hotel lobby. The franchisee would then service the Piestro machines via their restaurants by the truckload. The kiosks come with an automated supply chain system so operators always know what needs to be filled and how old products are.

“They'll load up the truck, they’ll drive around to replenish the food in each of the kiosks, and then they'll run the restaurant,” Lee says. “And the beautiful thing there is that the commissary is actually making money because it's also a streetside restaurant and replenishing the Piestro pods, which also makes money for them.” 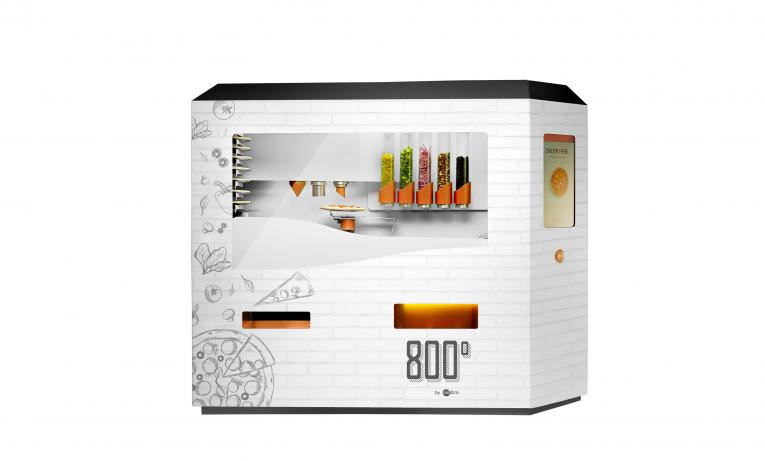 In addition to Piestro, 800 Degrees decided it was best to develop a solidified ghost kitchen partnership, an idea that's fast become widespread in recent months. In fact, the U.S. had roughly 1,500 ghost kitchens in July 2020, according to data from Euromonitor. After the pandemic began to lighten in 2021, 800 Degrees began discussions with REEF Kitchens, a company that provides turnkey delivery solutions by transforming mobile trailers into high-efficiency kitchens.

The two sides eventually agreed to open 500 delivery locations across the U.S., Canada, and other international markets in the next five years. The first outlet opened September 17 in the Miami market. Lee isn’t sure yet on the pace or specific geographies, but he can guarantee that 800 Degrees has a well-developed supply chain and that it can move as fast as REEF can.

The brand identified REEF as the ideal partner because of its capital and aggressive nature, Lee says. The company was also attracted to REEF’s business model in which it operates all of its ghost kitchens. As the pizza CEO says, “The fewer operators you have, the more likely you're going to be consistent and drive a consistent product.”

“Being I guess you could call us a brand with a small footprint, but a large shadow, we wanted to grow as fast as we could, and we felt with some of the changes we're making to our menu, into our offerings, that we offered a real opportunity for REEF to grow the brand with us,” Lee says. “And with their capitalization, with their size, with their aggressiveness, we felt like they were really good partners for us.”

“With every partnership, you have to have a good connection, and we felt like we had a great connection with these guys,” he adds. “They have a great culture, they have a great business, they're growing, and we wanted to be a part of that.”

Traditional growth is on the table, as well, the CEO says. 800 Degrees has formulated a new store prototype that cuts square footage to 1,500 to 2,000 square feet, eases operations, and lowers investment.

The prototype will sell the same items, but with new cooking techniques that create thin and crispy and classic crusts that cater more to delivery. REEF ghost kitchens and Piestro kiosks will use the same methods.