After 20 years, Freddy's is Growing Like it Never Has

The 450-unit concept will be close to a unit development record this year. In 2023, it's expected to be broken by a wide margin.

Freddy’s is only finishing up its first chapter, CEO Chris Dull says.

And what a time it’s been. The fast casual, celebrating its 20th anniversary in August, has gone from zero to 450 restaurants in two decades. The brand is the 12th-largest burger chain in America in terms of footprint and the 14th-biggest in sales, according to the QSR 50. In 2021, Freddy’s increased its system by 32 locations. The only burger concepts to open more were Culver’s, Wendy’s, and Shake Shack.

Freddy’s best opening year was 49 stores in 2018. Two years prior, the fast casual brought 47 units to market. In 2022, it will likely end up between 40 and 50 openings, ensuring a top-three slot in the record books. Next year, more than 50 are expected.

“We haven't officially given guidance, but we believe 2023 will be the biggest opening year of our history,” chief development officer Andrew Thengvall says.

Freddy’s pace of growth is ramping up, thanks in large part to Thompson Street Capital Partners, which purchased the chain in spring 2021. At that time, Joe St. Geme, one of the private equity firm’s directors, said the company would dedicate itself to accelerating franchise development. And the executive wasn’t lying. A few months after the announced sale, Thengvall was promoted to his current role from senior vice president of strategic growth and chief legal officer. Mary Coots—a veteran of Great American Cookies parent Global Franchise Group—was added as director of franchise development, and former Wendy’s executive Todd Phelps joined as director of franchise real estate.

The chain is in the process of building two, slimmer double-drive thru prototypes—one 2,800 square feet and the other 2,500 square feet. For comparison, the current build is a little over 3,000 square feet. These units will have two pickup windows on either side to enhance speed of service, and takeout/delivery orders will be accessible without going deep into the dining room. The restaurants are scheduled to be completed by late 2022 or early 2023.

The new boxes should maintain AUV while decreasing overhead costs, Thengvall says. The prototypes were developed by a committee comprising franchisees, corporate employees, and third-party vendors and contractors. The designs are in addition to Freddy’s first drive-thru-only location in Salina, Kansas, which was opened by franchisee JRI Hospitality in fall 2021.

As Freddy’s works through these prototypes, it’s continuing to explore digital menuboards and potentially in-store ordering kiosks. As of now, drive-thru accounts for 52 percent of sales and digital mixes 8 percent. To build the latter, Freddy’s rolled out its first web-based ordering platform in July and adopted a more meaningful loyalty partner. The moves are already having the intended effect, with loyalty growing from a 1 percent mix to 4 percent in a month’s time.

“We've been very mindful of the digital transformation and third-party delivery and curbside and all of the order modes that have really become a meaningful part of our business,” Dull says. “In the new prototypes, there's definitely a thought put into how we execute more efficiently the carryout component of our business that is driven by app-based and online ordering and then also the third-party delivery.” 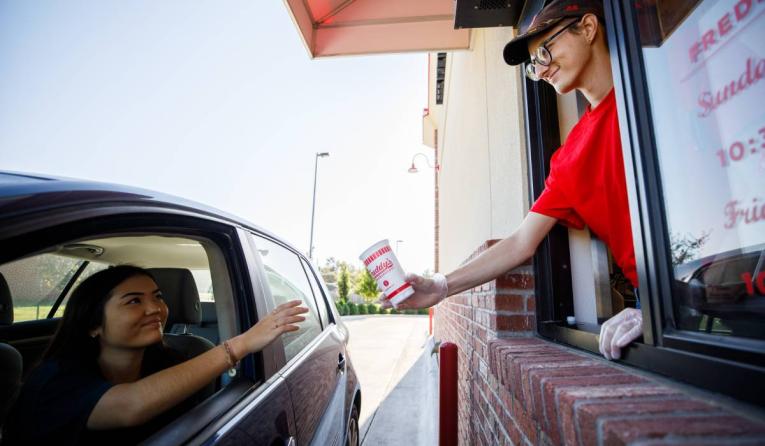 In addition to standalone, Freddy’s offers inline, endcap drive-thru, and a growing nontraditional business. The brand opened its first airport location in Oklahoma City this year, and another is in the queue. The company is also exploring college campuses, casinos, and stadiums.

In 2022, expansion is split evenly among new and existing operators, and agreements have been sold from coast to coast. In April, Freddy’s announced multi-unit agreements that will bring 64 locations to North Carolina, South Carolina, Texas, Louisiana, Illinois, and California. In May, the chain announced its debut in Fargo, North Dakota, and Sioux Falls, South Dakota. The Fargo restaurant has been one of the strongest performers in the country, and the Sioux Falls store set new records for opening week sales.

Typically, Freddy’s sells multi-unit deals that include a minimum of four stores. The brand will sell more than that depending on experience of the franchisee.

“Our 20th anniversary is coming up here. And I think as we look back historically at Freddy's, we obviously started in Wichita, Kansas, and we grew from there, but very quickly,” Thengvall says. “We found success, first in California, we opened there in the early 2010s, and then shortly thereafter in Philadelphia. And as we started to branch out, what we found is that the Freddy's products and the Freddy's way of doing business has success all over the country, the same way it does in the Midwest.”

Although restaurants still face inflationary commodity and labor expenses, Thengvall and Dull both say the franchise community remains excited and engaged. Freddy’s reported a 17.8 percent increase in systemwide sales in 2021, and franchisees experienced a 13.7 percent lift in AUV.

Dull points out that Freddy’s first franchisee opened their restaurant in 2004, and they are still developing today. The chain’s second-ever operator signed in the same year and debuted a location in 2006—they are still growing, as well. Those two franchisees will open a combined three outlets in 2022. The 11th, 12th, and 13th, operators signed in 2008, during the Great Recession.

“Our system and our growth is based on a very consistent product that we deliver and very consistent and longstanding relationships with our franchise community,” Dull says. “And these groups have been through ’08, ’09, ’10 recession. They've been through COVID now, and so as we see the macros go up and down, I believe Freddy’s is a system that is consistent and will continue to stand the test of time because of the way we do business on our three pillars—quality hospitality, and cleanliness—and also the consistency in our relationships with our franchise community. And so they're very confident in our brand, and we’re in turn very confident in their ability to execute the brand.”

From a development perspective, Freddy’s has the necessary commitments in its pipeline to reach the 800-unit goal. Now, it’s all about providing the right amount of support in three key areas—operations, marketing, and training. The company will continue adding human capital to ensure it’s giving franchisees enough tools to drive profitable revenues.

“A great brand with a great legacy and history of success and a lot of exciting new things coming to keep Freddy’s relevant and really disrupting the burger space,” Dull says. “With a product that's truly high quality and made to order and served in an environment of absolute hospitality and then a super clean environment. So we're excited about the next 20 [years].