But the new restaurant venture from NBA legend Ray Allen and his wife, Shannon, isn’t just another athlete lending his name to a business, like so many of the others. This isn’t just one more investment for a post-professional sports career. For the Allens, their new Miami-based organic-food quick-service concept, Grown, is about family, about nourishment, and about the countless other families like them looking for healthy food fast.

As Shannon Allen tells it, the idea for Grown sprouted six years ago, while Ray Allen—a 10-time All-Star, two-time NBA champion, and future Hall of Famer—was traveling as a member of the Boston Celtics. Shannon, pregnant with their fifth child, was driving to the grocery store when son Walker, who has Type 1 diabetes, needed food immediately to help with low blood sugar. After realizing that her only options nearby were fried and unhealthy food, Shannon was forced to call a chef friend, who ran some gluten-free chicken tenders out to the car from the kitchen of his restaurant.

“I remember sitting on the shower floor crying because I was so frustrated,” Shannon says of later that night. “I got out of the shower and called Ray and I was like, ‘You know what, if nobody has [the guts] to reinvent fast food, then we’ve got to do it.’”

And that’s exactly what they’ve set out to do. Since that day in Boston, the Allens have been assembling a team of business and restaurant veterans to develop a health-forward quick-service concept serving, as they call it, “real food, cooked slow, for fast people.” The core idea of the concept is to create a convenient food destination for families, dieters, and others who need cheap, healthy food in a pinch.

“It allows people to at least think for themselves and say, ‘You know, I could eat there. It doesn’t exclude me,’” Ray Allen says. “It’s not about vegetarians. It’s not about body builders. It’s about everybody—it’s all-inclusive.”

Chef Todd Kiley, the friend who saved the day for Shannon six years ago and veteran of Rainforest Café and Legal Sea Foods, relocated to Miami to help. Others on Grown’s “Kitchen Cabinet” of advisers include Tara Mardigan, director of nutrition at Fruit Street Health, co-author of Real Fit Kitchen, and former team nutritionist for the Boston Red Sox; Asha Loring, executive director of Health in the Hood; and Gabriele Marewski, founder of Paradise Farms Organic, among others.

“I know people are going to say, ‘This is awesome, Ray has this incredible career, he’s an icon … and he’s reinventing fast food,’” Shannon says. “But even beyond that, I think the story of Grown is that it was time. It’s time for this. And we’re not doing it alone; we’ve got an army of people who are standing with us, and that’s the beauty of it.”

Grown is opening its first location in Miami in March. The primary focus of the menu is organic, farm-to-table food; for breakfast, there are options like omelets, baked goods, steel-cut oatmeal, fresh fruit, cold-pressed juices, and smoothies. For lunch and dinner, there are small-batch soups, salads, sandwiches, wraps, and family-style meals like rotisserie chicken. Everything is made in-house, down to the dressings and marinades. There are no freezers on the premises; everything is made fresh.

Shannon says menu items can be made vegan-friendly (just ask for the grilled portabella mushrooms or falafel in your salad or wrap instead of meat), Paleo-friendly, gluten-free, and in a child’s portion, while Grown is also a peanut-free facility to respect those with allergies. Prices are anywhere between $4 and $18 for menu items. 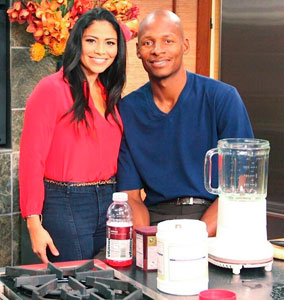 The restaurant’s design is modern but relaxed, including an open kitchen, rustic wood finishes, white and blue hues, a communal bar, and dining indoors and out. In the middle of the dining room there’s a floor-to-ceiling living wall, which includes edible and aromatic vegetation.

“When you walk into the restaurant, you get a feeling like you’re in your own kitchen,” Ray says. “When people step outside of their kitchens, they have to dumb down how they eat. … When you walk out of our restaurant, you at least feel good that you didn’t have to compromise your eating standards just because you stepped outside of your house to eat.”

The restaurant also includes a rooftop garden, where local farmers are helping to grow greens, vegetables, and herbs, leveraging Miami’s 10-month growing season. Grown even has a dumbwaiter system that delivers the fresh food from the roof to the kitchen.

Ray says one of Grown’s goals is to once again make farmers the star of the food system. “It puts the farmer back into the conversation,” he says. “The farming system has gone away from how we eat now because everything is so processed. So now, you hear a lot about farm to table; people want to know their food came straight from the ground to the restaurant and then into their mouth. This is at least giving them a semblance of knowing exactly where their food came from.”

For as much as Grown is featuring premium foods in an upscale atmosphere, the Allens don’t consider it fast casual. This is fast food through and through, and that’s not more evident than in the fact that Grown boasts a drive thru.

Shannon says it was critical to offer a drive thru so that busy parents carting their kids around could still easily access affordable, healthy meals.

“The drive thru didn’t need to go away, just what’s offered in a drive thru,” she says. “So it’s absolutely fast food, and that’s our goal: To make people’s lives easier, to make it convenient, to make it accessible, to make it affordable, and to make it great. If we can do that, then hopefully people will love it.”

The Allens aren’t looking to conquer fast food; they don’t want to replace McDonald’s. In fact, while there aren’t plans for additional locations just yet, Shannon says she can see a day when thousands of Grown restaurants sit side by side with McDonald’s all across the U.S.

All they want to do is create an option for those customers who, when needing nourishment the most, don’t have to be left wanting.

“The name is not intimidating,” Ray says. “It allows people to at least think for themselves and say, ‘You know, I could eat there. It doesn’t exclude me.’ It’s not about vegetarians. It’s not about body builders. It’s about everybody—it’s all-inclusive. So it does give access to young, old—anybody.”