The Arby's Foundation has given out $100M in grants over the years.

In the fall of 2018, Arby’s annual “National Restaurant Fundraiser” became the “Make a Difference Campaign.” There was one headline change. Several years earlier, Arby’s began keeping 50 cents of every dollar in the state where it was raised. But now, the company’s charitable arm gave local operational leadership the ability to make grant requests on behalf of nonprofits in their communities.

In other words, franchisees made the call.

This has been a category-busting evolution, Arby’s Foundation board chairman and company CMO Patrick Schwing says. Namely, it’s empowered franchisees to impact change where it matters most to them. The result being more ground-level engagement, and, on some level, enabling stores to dispel one of franchising’s greatest myths—that individual units are cogs of a corporate machine, and not small restaurants who live, breathe, and support the markets they operate in.

“I think we’ve created an opportunity for everyone to benefit at a brand level and for the local franchisees to see the value in giving back to their community and feel like that money is going to a place they could see the benefit,” he says.

An interesting turn of late, amid pandemic conditions, is Arby’s 2020 Make a Difference Campaign becoming the most successful fall effort in brand history. One key is the construct, of allowing franchisees to serve their home bases. The other is something Arby’s didn’t quite expect.

From 2017, participation was up roughly 60 percent—45 percent over last year. Guests are asked at the end of their order if they would like to donate $1 to make a difference in the lives of America’s youth. As it turns out, COVID-19 didn’t restrict the process as much as it provided fresh perspective.

“I think everybody, regardless of where you’re at, what you’re going through, what you do, knows that everybody needs a little bit of help right now,” says Joann Yoder, an Arby franchisee, “whether it’s mentally or financially or emotionally. So I think the employees—I mean they’re people, too—realize that and they have really stepped up and are really proud to be part of something bigger than themselves.”

From August 24 to September 27, Arby’s Make a Difference Campaign raised $4 million. More than $6 million will go out in grants to support both local organizations and national non-profit partners (Arby’s donates the other 50 percent to large-scale companies such as Big Brothers Big Sisters, No Kid Hungry, and Junior Achievement).

In October, the Arby’s Foundation eclipsed a broader milestone, too, passing $100 million in grants given to the community since its 1986 founding.

To celebrate, the Foundation surprised an Arby’s employee, Chanelle Whitaker from store No. 6060 in Jonesborough, Tennessee, by presenting a $10,000 grant on her behalf to a local youth-serving organization of her picking. Whitaker chose the Second Harvest Food Bank of Northeast Tennessee. Franchisee Arbico East matched the Foundation’s donation.

Yoder has spent 31 yeas with Arby’s and now directs the Brumit Restaurant Group. She says Make a Difference’s 50/50 setup amplified past efforts. And yes, it’s helped her make a big brand seem small, so to speak. “What this has allowed us to do is to have a voice in the local community so that it creates more of a bond with the brand at the local level,” she says. 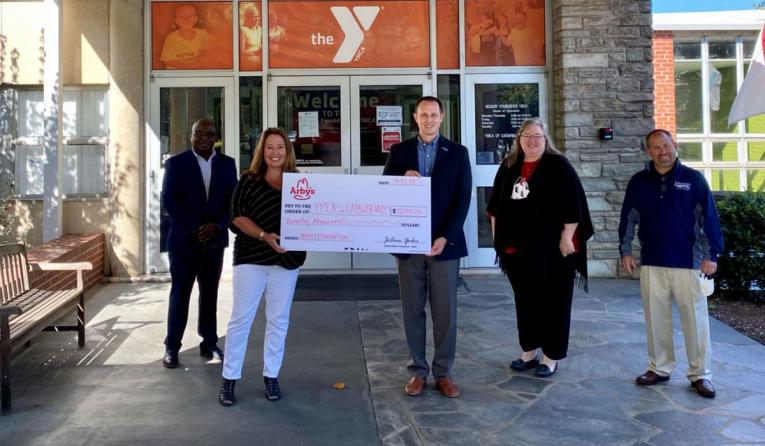 Joann Yoder has been with Arby's for more than three decades.

Schwing joined Arby’s on March 1, of all times. He arrived after 16 years with Procter & Gamble. Most recently leading Oral-B’s Global Power Brush Interactivity and Innovation division. There, he launched the Oral-B Connect product portfolio, which leveraged a host of new AI and digital technologies.

Schwing admits he didn’t know a ton about the Foundation when he arrived on the doorstep of a global crisis. But it didn’t take long for the unique nature of the program to jump out. “And it’s a program that is a huge source of pride for our entire system across franchisees and at the corporate office,” he says.

And it’s only climbed the last three years with the franchisee activation.

“From the team members in the restaurant to the franchisee community to the GMs all the way up through the Inspire [Brands] business, making this a source of pride for our entire system is really important and we think it’s a differentiator in our system,” Schwing says. Arby’s parent, Inspire Brands, also owns Buffalo Wild Wings, Sonic Drive-In, and Jimmy John’s.

Hosting this year’s event during COVID-19 is something Foundation board members discussed months ago, Yoder says. “We talked about, is this the right time? And I think we’re all a little surprised at how much everybody has come together to make this successful,” she says.

“As different of a time as it is, I think this idea that every kid deserves to dream big is something we can all rally around and agree on,” Schwing adds.

The “every kid deserves to dream” ethos serves as the campaign’s framework. It’s how Arby’s corporate landed on national non-profit partners and how franchisees select local organizations.

Schwing and Yoder sit on the Foundation’s board together. Communication between Arby’s and its franchisees has long the company’s key charitable success. The Foundation is a separate entity that runs autonomously from Arby’s base business. The board splits 50/50 among corporate employees and operators.

“We have a board that’s always going to work together toward the common good and we’ve designed intentionally so,” Schwing says.

Yoder echoed the sentiment. “The foundation has always pooled together some franchisees, corporate personal, as well as our vendor partners,” she says. “And part of that every year was getting in a ring together and talking about what’s working. What’s not working? What should we change? What should we look at differently? So it’s always been a very collaborative effort. It hasn’t ever been hey, 'we’re doing a fundraiser, raise money, and then we’ll decide what we’re going to do with the funds.”

Arby’s understands its platform needs buy-in from operators to go beyond the average result. And it begins with trust, Schwing says.

“We’ve always been able to acknowledge these dollars raised in these communities need to find a way back to serve those folks,” he says. And that’s created the partnership that we’ve been able to get today. It gives us a sense of purpose here and it’s a source of pride.”