Ampex Brands, which took over in 2021, is working on a modernized prototype that mixes experience and convenience.

When Ericka Garza became president of Au Bon Pain last year, she knew what the first question from operators would be—what are you bringing to the table that’s unique?

The skepticism lies in the fact that after Panera founder Ron Shaich oversaw the concept from 1981 to 1999, ownership switched five times, including the sandwich fast casual buying the chain again in 2017. Ampex Brands, a 400-unit franchisee of Pizza Hut, KFC, Taco Bell, Long John Silver’s, and 7-Eleven took over for Panera in 2021, marking change No. 6. Before the acquisition, Au Bon Pain stores were either closing or being converted to Panera restaurants.

When Garza did her due diligence on the brand, she saw opportunities for improvement. But more importantly, there was enough of a foundation to aggressively seek those goals. Au Bon Pain has 186 restaurants globally, including 76 franchises and 43 corporate stores in the U.S. and 67 franchised shops in Thailand. Domestically, there are stores across 21 states and Washington, D.C.

“The strength of the brand is incredible culture,” Garza says. “I knew I was inheriting a great leadership team as well as a brand that has a reputation that's got a lot of heritage when it comes to product, the food, the locations that we're at, and most importantly, the franchises that we have in the system.”

One of the biggest voids was marketing support for franchisees, including expansion of the loyalty database and promotion of menu innovation. This blind spot was filled under the direction of Beth Collins, Ampex’s first global chief marketing officer. She came in with more than 20 years of C-level experience, with companies such as Raising Cane’s and Twin Peaks.

Au Bon Pain also restructured its support center, giving employees more room to grow within the organization. The brand divided its markets, and that opened opportunities to develop new directors of operations and promote others to vice president positions.

“I think there’s something really special when you can say that you've got a team that has been in place for 20, 16, 11, 10 years,” Garza says. “The 10-year individuals being probably the youngest in terms of tenure with our brand. But to still be able to see that growth, that appetite, that energy, and want to see this company succeed—we could not be here talking about these highlights and these results without this community.”

The company then contemplated how it could develop a modern prototype that’s accessible, but also profitable for franchisees. Au Bon Pain secured a partnership with design firm Rubber & Road, which has worked with the likes of Jersey Mike’s, Chuck E. Cheese, The Halal Guys, and Ben & Jerry’s. During this process, a survey was sent to field operators and franchisees to get an idea of what was truly needed in the next iteration, and how it can do it in a way that doesn’t erase heritage, logos, and the iconic yellow coloring.

Rubber & Road redesigned the bakery-cafe’s interior and exterior, including signage, artwork, and finishes that speak to Au Bon Pain’s French roots. The concept wanted to preserve the different shopping experiences of customers. For the on-the-go consumer, the prototype adds a new ordering station, self-serve bakery, and to-go areas. For experiential guests, there's comfortable seating and more visibility in the kitchen.

Companywide rollout is expected in 2023. Earlier this year, Au Bon Pain launched a new kiosk design for its commuter and university locations.

“Creating an exceptional guest experience has always been our priority, and we developed 'Cafe of the Future' with their needs in mind,” Garza says. “Navigating the cafe will be intuitive with product placement and prominent wayfinding signage throughout the ordering process, so guests can grab delicious food, quickly. For those that want to stay for a bit, we offer a lovely space with fun details, including a sweet French 'hello' painted at the entrance and playful art using our sheet pans. We are so grateful to our partners at Rubber & Road for helping us identify this modern, genuine expression of Au Bon Pain.” 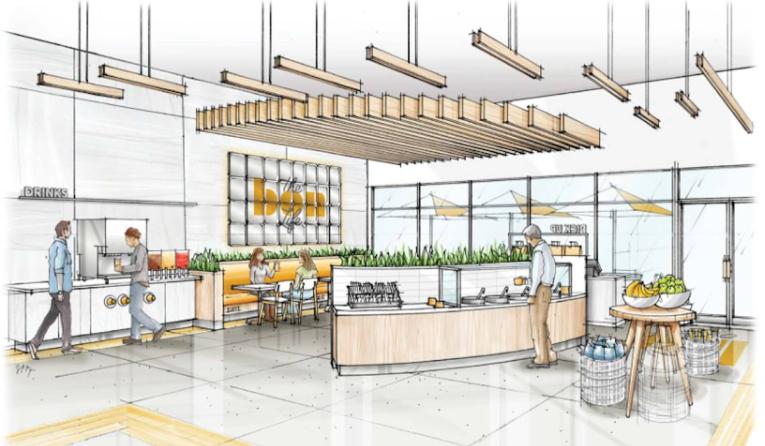 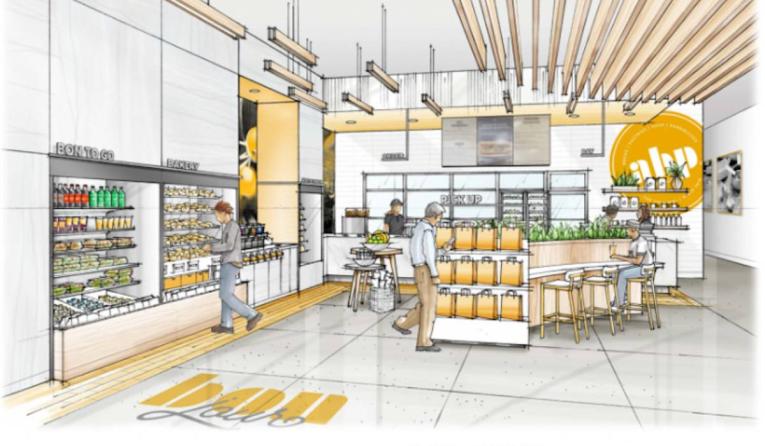 In June, Au Bon Pain’s turnaround reached a milestone when a new bakery-cafe opened at the Macy’s Queens Center in Elmhurst, New York. It’s the first corporate opening since Ampex took over and kicked off further expansion efforts inside the state. It’s the second such partnership with the well-known retail brand. Au Bon Pain has also been housed in Macy’s Herald Square in Manhattan for 20 years.

In addition to new company-owned locations, the chain purchased four franchised units in need of retuning. All of it is an effort to show operators that Ampex is willing to put in the investment, Garza says.

“One of my primary goals was going back to the basics for franchisees, and I laid out some very strong commitments,” the president says. “And my commitment to our franchisees was, we were going to grow our corporate locations. The Macy's second location, I think as a brand overall there was momentum there. It's a big deal for the brand. There has not been a new location in many, many years. And so with this one location, it really has provided opportunities for demonstration, most importantly for existing franchises and new potential franchisees wanting to come into the business.”

Au Bon Pain expects roughly nine to 10 franchise locations to open before the end of 2022. In the U.S., the brand will focus growth in core markets like Miami, New York, Washington, D.C., Pittsburgh, and Philadelphia. Internationally, Mexico is being explored, and Thailand will add five shops by year’s end. Going forward, Garza expects more franchise expansion compared to company-run development. She believes there’ll be more corporate cafes in Texas, which holds Au Bon Pain’s training center. As development marches on, the concept will continue to seek real estate that it’s known for—hospitals and clinics, universities, travel centers, and airports. The brand will likely stay away from business offices, an industry that Garza says is getting better, but has not quite recovered. Existing franchisees are looking into standalone boxes; Garza sees it as a big opportunity, but she also wants to make sure Au Bon Pain doesn’t stray too far from what’s worked in the past.

A year into the acquisition, Garza describes the Ampex/Au Bon Pain partnership as a success.

“I knew that it was going to be a lot of work, I knew that in some areas it was going to be very challenging, but I came in determined with the team that I inherited of achieving goals and setting out a strategy,” Garza says. “I can tell you here today, we are very proud of our achievements, and we're pretty confident in where we're headed as a brand. In a short time, we’ve come very far with tangible results.”

How Restaurants Can Counter Inflation with a Gift Card Program
What is the Inflationary Tipping Point for Fast Food?
Why Inflation is Making Customer Experience More Important than Ever

Sometimes, Friction is Needed to Build Customer Experiences
AI and Machine Learning Enter the Kitchen at Chipotle
Advancing Hospitality in the Post-COVID Economy

The State of Restaurants: Demand, Price, and a Race for Loyalty
Amid Inflation, Restaurants Work to Guard Value Proposition
Inflation Sends Restaurant Customers on a Hunt for Value

Robert Thompson Has an Answer to America’s Pickleball Fever
The ROI of ESG for Restaurant Brands
Restaurant Franchising After COVID: A Story of Resiliency and Rebound