The coffee shop wants to open 150 stores in the next five years.

Web Exclusives | March 28, 2022 | Ben Coley
Bad Ass Coffee
Part of the chain's expansion plans is to build in Hawaii and strengthen its connection with the islands.

Scott Snyder joined Bad Ass Coffee of Hawaii in December 2017 as a consultant tasked with improving the marketing strategy of a brand that hadn’t sold a franchise in a number of years.

The chain was founded in 1989 and started franchising on the mainland in 1995, built on its 100 percent Kona coffee from Hawaii. The chain has grown to roughly 30 U.S. shops across 13 states.

To Snyder, the name brought people in the door and the product kept them coming back, but it was clear that better infrastructure was needed to support franchise success. So in July 2019, Snyder and a group of investors purchased the brand under the name Royal Aloha Coffee Company and moved headquarters to Denver.

The group spent the rest of 2019 engaging in branding exercises, mapping out priorities, and building marketing, operations, menu, and technology. In June 2020—during the initial rise of COVID—the first rebranded store opened in West Jordan, Utah, near Salt Lake City. The location came with a contemporary logo and graphics, Hawaiian décor, and pre-packaged, branded coffees for purchase.

“Rarely do you get the opportunity to have an established brand that you can wipe the slate clean,” Snyder says. “We had a great name, we had great product, but everything else needed to be rebuilt from scratch and built from the ground up.”

The rebuild didn’t stop there, however. In those early days of the pandemic, Bad Ass Coffee didn’t have an online ordering platform. But the leadership team quickly pivoted and integrated short-term solutions that helped stores remain open while other restaurants couldn’t. The adjustment was so effective that within about four months, sales exceeded pre-COVID levels.

During that time, it also became clear that drive-thru was king. In 2020, the channel went from increasing orders by 4 percent in January year-over-year to 22 percent in December, and represented 44 percent of off-premises orders, according to The NPD Group. In the year ending October 2021, the channel grew visits by 9 percent year-over-year and by 23 percent versus 2019.

Bad Ass Coffee was largely inline at that point, with a handful of endcap drive-thru units. Snyder knew that had to change if the brand wanted to compete post-COVID.

“We needed to have a variety of models that would work with the individual franchisee for where they're at and what sort of real estate opportunity is available to them,” the CEO says.

The brand started by perfecting its existing endcap design. Then in late summer 2020, Bad Ass Coffee explored a double drive-thru concept that became the inspiration for two new prototypes.

One is a freestanding drive-thru with a full café that spans roughly 1,650 to 1,800 square feet. The first is set to open in Hendersonville, Tennessee—in the Nashville metropolitan area—in late Q3.

It's part of the largest franchise deal in company history. Under the agreement, Rothwell Development will open 18 stores in Tennessee, including four in Knoxville, two in Gatlinburg, and 12 in the greater Nashville market. There’s also an option to debut an additional 15-20 shops.

“We began working on that [freestanding prototype] the fall of 2021, knowing that we had a developer in Tennessee who was looking for real estate, was looking for dirt to build brand new buildings from the ground up,” Snyder says.

The second prototype is a double-drive thru that’s 500–740 square feet with a pickup window and no interior seating. It’s scheduled to open in Q4 2022. Snyder says this model could manifest itself in multiple ways. It could be one with two traditional drive-thru lanes and a menuboard, or it could feature one lane for mobile pickup orders. Bad Ass Coffee is also exploring other technologies that would facilitate curbside pickup.

“I think everyone is interested in the drive-thru right now,” Snyder says. “Real estate is a challenge. Whether you're a franchise or corporate restaurant brand, real estate is really challenging. It's expensive.” 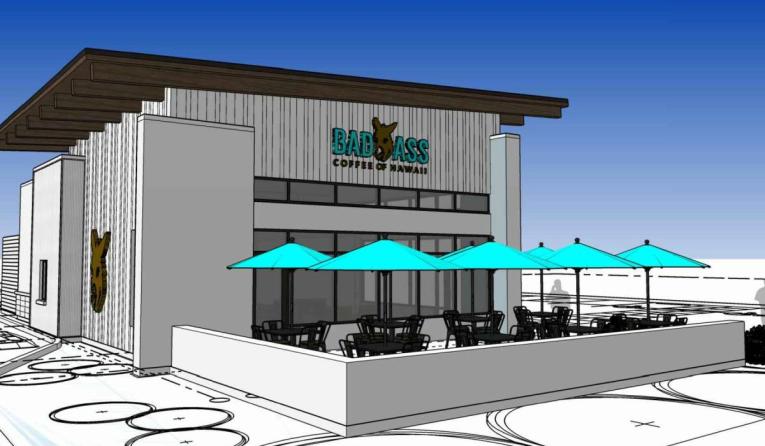 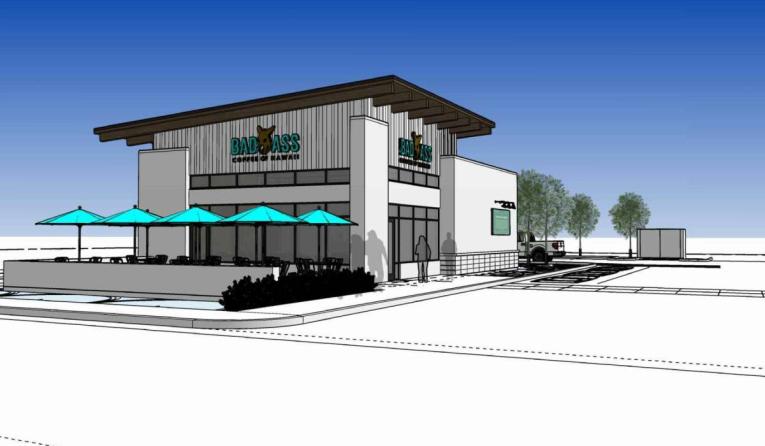 The standalone drive-thru will first open in Q3 in Hendersonville, Tennessee. 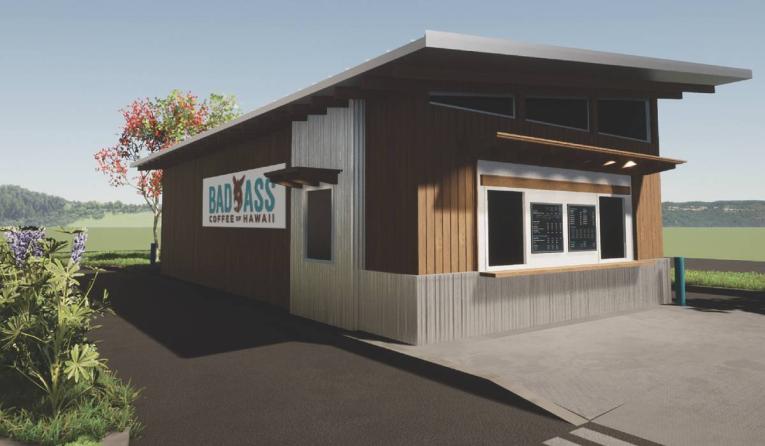 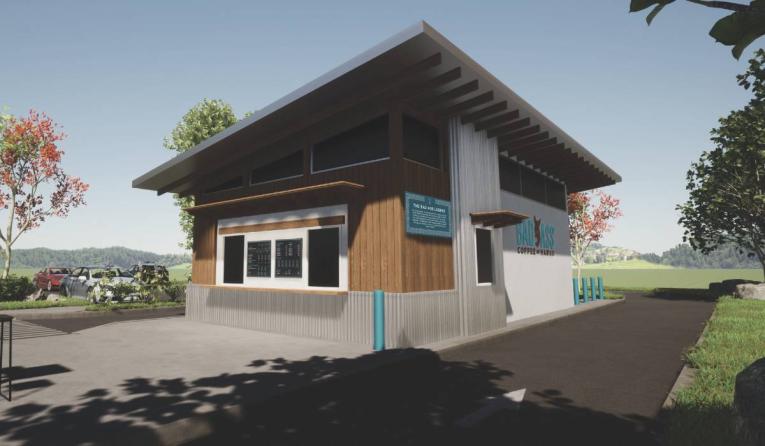 The drive-thru-only design will be between 500 to 740 square feet.

Snyder believes operators will mostly seek endcap drive-thru locations because the building infrastructure already exists and just needs to be leased. For those that are developers, he says there’s more interest in owning the building as well as the dirt, meaning they’ll lean toward freestanding buildings.

In any given market, there will be a mix of prototypes, but Snyder thinks it’s important that the first store in an area has a café.

“Whether it's an inline unit or whether it's an endcap or whether it's a freestanding store,” Snyder says. “I do think that's important, especially as the brand moves into new markets to get that full Bad Ass Coffee of Hawaii brand experience because we are very much so an experiential brand. After that, I think you can have a lot more flexibility with the store types, depending on where they're going to be situated.”

Bad Ass Coffee expects to debut 25-30 units 2022 and continue with that cadence in the years beyond. The long-term goal is to open 150 shops in the next five years. The focus will be on the Southeast and Southwest in places like Pensacola Beach, Florida, Orange Beach, Alabama, Nashville, Scottsdale, Phoenix, and Orange County, California. More openings are planned for the home state of Colorado, as well, in Denver and Colorado Springs.

The other emphasis will be for Bad Ass Coffee to strengthen its Hawaiian roots and build upon two remaining locations in Maui.

“We strive to be as authentic um as we can and we want to invest in that. That's a big focus for us,” Snyder says. “Number one, it's important to be a Hawaiian brand and have a Hawaiian presence, but number two, I think it also gives us a better first-hand experience as to what it means to be authentic because we're trying very hard and we're working very hard to be true to where this brand started.”

In light of inflation and supply chain delays, Snyder says the company has adjusted its expectations in terms of timelines of store openings. To achieve its goal of 25-30 shops in 2022, Bad Ass Coffee will  order materials much further in advance than it did two years ago.

As for the bigger goal of 150 debuts, Snyder says it will come down to alignment between management and franchisees on overall vision—what this brand is and how it’s going to evolve in the coming years.

“That helps us to prioritize what's most important to ensure that our franchisees are successful in every phase of the process,” Snyder says. “From the day they sign, until the day we open the doors and in the grand opening a few weeks later, we're committed to their success and committed to continuing to build and refine this infrastructure to justify their investment and confidence in us.”

Has Chipotle Raised its Prices Too Much?
The Future of Fast Casual in 2023 and Beyond
Supporting New Restaurant Franchisees, By Experience Level