The chicken chain started as a ghost kitchen when COVID delayed construction.

Web Exclusives | August 27, 2020 | Ben Coley
The Hatchery
The Hatchery was inspired by some of the category's biggest players.

The team had eyes on expanding its platform for three years. CEO Chris Elliott explains that FSC’s decision to enter the chicken category was informed by researching the top-10 industry growth leaders, which included Chick-fil-A, Zaxby’s, Wingstop, and Raising Cane’s. The idea behind the Hatchery was to take all those specialties—sandwiches, wings, and tenders—and place them under one roof.

The pieces were set to come together this year. In January, construction on The Hatchery began in Tampa, Florida. The new restaurant was scheduled to open in April, but the COVID pandemic effectively ended those plans as stay-at-home orders shut down construction.

Then one question was posed: What can the company do until stay-at-home orders allow construction to restart?

The answer was to temporarily transform The Hatchery into a ghost kitchen. The move gave the brand eight weeks to get consumer reactions and to test internal processes under a live environment.

CHECK OUT WHERE THE TOP CHICKEN CHAINS IN AMERICA RANK, BY SALES, AUV, AND MORE

With The Hatchery’s brick-and-mortar store now scheduled to open Monday, Elliott notes the fast casual is already hitting the mark in terms of product quality.

“We felt like to get into that competitive environment with chicken and to compete with the likes of industry leaders like Chick-fil-A, Raising Cane’s, the product quality had to be off the charts,” Elliott says. “And so the reason this thing took so long to develop was we spent so much time developing proprietary marinades, proprietary breading systems, perfecting the equipment setup—there’s just a lot that went into product development because we felt it had to have very high-quality products.”

In addition to chicken products, The Hatchery offers the Hatch Burger, a blend of short rib and brisket. The fast casual also features an all-day breakfast menu and a sandwich consisting of two fresh eggs, cheddar cheese, and two strips of smoked bacon on a brioche bun. Other notable items are a selection of salads, kid’s menu, and side items like onion rings and French fries.

The beverage lineup includes what the brand calls Smashed Lemonade—with fresh strawberries and blueberries—and Infusers, which are herb and fruit-infused water slightly sweetened with cane sugar. The menu will also include alcohol. 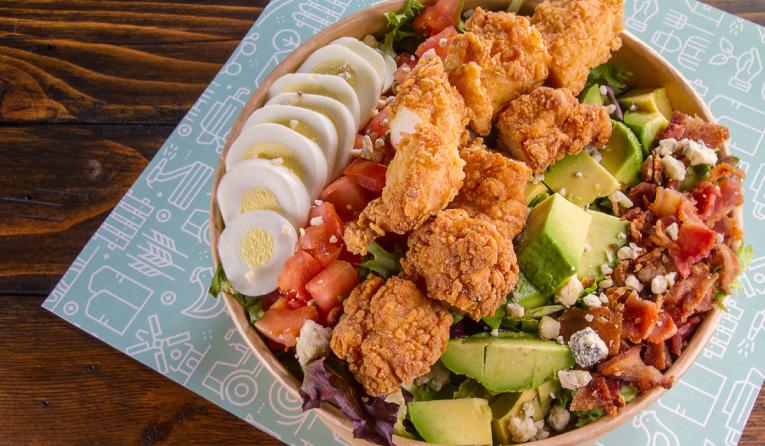 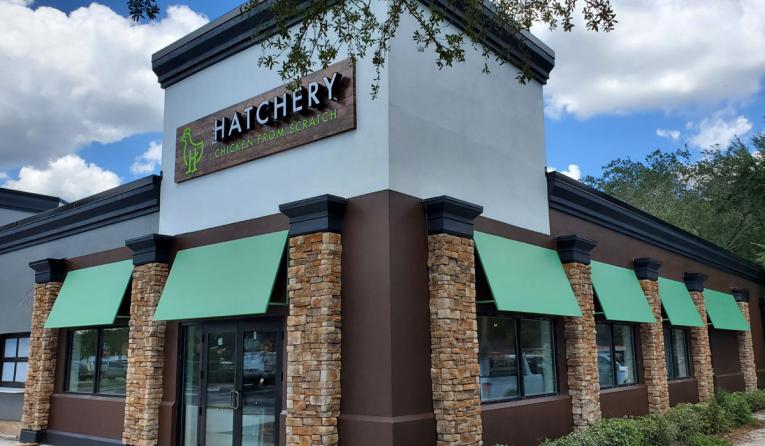 The Hatchery’s brick-and-mortar store is scheduled to open Monday.

The CEO says The Hatchery caters to a wide range of demographics. As he puts it, “We’re going for everybody.”

“The other thing in the test kitchen we were trying to get a sense of was, were we trying to do too much?” Elliott says. “And I still think that’s going to play out in the brick-and-mortar experience. The risk in doing what we’re doing is, are you trying to do too much? It didn’t feel like it in the ghost kitchen, but we’ll see what happens when we open the doors.”

The store is 2,400 square feet and seats 72. There isn’t a patio, but the company owns a business next door that does have a patio, which will be accessible. There’s a self-serve kiosk and two registers at the front counter, protected by plexiglas screens. Elliott expects off-premises to mix 30 to 40 percent, so the brand is equipped with an extensive catering menu, mobile app, and curbside and pickup options.

The decor is farmhouse chic, with materials, colors, and artwork expressing homage to the American farmer. There are outlets and USB ports in each booth, as well.

The real estate doesn’t permit a drive-thru. Elliott says it’s up for debate whether the brand will add that channel to future locations.

“We realize, particularly now since the pandemic, how well concepts with drive-thrus performed in the pandemic,” Elliott says. “That might be an option that we gravitate towards later on. And we actually built the kitchen and the product flows so that we could accommodate a drive-thru fairly easily.”

Before landing on the idea for a brick-and-mortar fast casual, Elliott says there was much discussion about opting for a virtual brand. Many restaurants have chosen this route, including Chuck E. Cheese, Applebee’s, Chili’s, and more.

FSC looked at Beef ‘O’ Brady’s and Brass Tap to see whether The Hatchery could successfully launch in their kitchens. However, the designs weren’t compatible enough.

“I think there’s going to be some successful virtual kitchen brands, but they're gonna have to be designed around that,” Elliott says. “The Beef ‘O’ Brady’s kitchens and the Brass Tap kitchens don't have the same equipment set up that we have in The Hatchery. We have pressure fryers in The Hatchery, which neither one of those brands have, and the hood systems can't accommodate the type of grill and the type of cooking platform we have in The Hatchery. So we did look at that. … We may go that route to expand The Hatchery faster, but at this point, it doesn't look feasible to do it.”

Elliott says there’s a lot of whitespace in what they’re trying to accomplish with The Hatchery. The basic strategy in the beginning—which may change after the store opens—is to build a smaller footprint that could go into an endcap or an inline location and cost somewhere between $500,000 and $700,000 and earn between $1.5 million and $2 million in annual sales.

The brand wants to enter small and medium-sized towns that may not be big enough to accommodate a large brand like Chick-fil-A.

“We’ve been very successful with that strategy with Beef ‘O’ Brady’s,” Elliott says. “… Now that’s all subject to change based on how it performs, and you may see it in places that we didn’t think it was designed to go early on, and you may see it with a drive-thru someday. All that’s going to be figured out once we see how the general public reacts to the brand and we get it fined-tuned.”