If the Louisville-based fast casual reaches the high-end of its 2023 projections, it will triple in size.

Lauren Coulter, director of franchising and development for Biscuit Belly, expected negotiation talks to go a lot differently in the face of inflation, supply chain mishaps, and a potential recession.

Instead, she’s found operators want to be in this business. The fast casual has partnered with franchisees that have made a certain number of commitments with other concepts, and they've shifted plans to build more Biscuit Belly restaurants.

Coulter owes this significant move to the six-unit chain’s unit economics. Chicken prices, a major protein on the brand’s menu, are coming down. Eggs and butter should stay high through the end of the year because of baking season, but in theory, those should fall as well once the new year hits. Average labor costs are 27.33 percent and cost of goods sold is 28.33 percent. And the average ticket is roughly $26. Food can be delivered in as little as 10 minutes, and table turns happen as quickly as 10-25 minutes, promising higher volumes. Not to mention, stores close at 2 p.m., creating a favorable schedule for franchisees and employees.

“They want to be in restaurants, they want to be in a new thing,” Coulter says. “And so we're just lucky that they're seeing the unit economics and what it costs to open a Biscuit Belly is favorable when you compare it to some of these other concepts. And I think we're definitely walking that fine line of making our spaces feel warm and fun and engaging without breaking the bank if you will. I mean recently this weekend we had a new store open and really, I felt it leveled up the interior design of the space. But nothing that we're doing is wildly expensive. It’s an exciting and cool place to be right now.”

Kentucky-based Biscuit Belly, founded by Coulter and her husband, Chad, in 2019, began franchising in 2020. The company now has six locations across Kentucky, Indiana, and Georgia, with two franchise stores in Lexington, Kentucky, and Acworth, Georgia. The company recently closed one of its Louisville locations after struggles with staffing shortages, higher cost of goods and utilities, and lower sales volumes. Despite the closure, Chad Coulter said Biscuit Belly will continue to build more in the Louisville market.

The chain projects next year to be the biggest growth on record, with 8-12 openings across Alabama, North Carolina, Virginia, Georgia, and Kentucky. Ideally, Coulter says, Biscuit Belly will eventually be able to march further west, with deals in Mississippi, Louisiana, and Texas.

There are roughly 20 stores under development. The priority is growing with existing partners who have shown eagerness to expand beyond their agreed-upon development contract, which is typically three to five units. Coulter says there’s potential that a couple of more deals could be struck before the year is over, worth about six restaurants.

Biscuit Belly primarily targets communities with plenty of tech-savvy young professional households. The chain requires 2,800 to 3,000 square feet in either an inline or endcap situation; preferably the latter so it can take advantage of patio space. The company believes its branding works in up-and-coming neighborhoods, denser downtown areas, or a newly built strip mall. 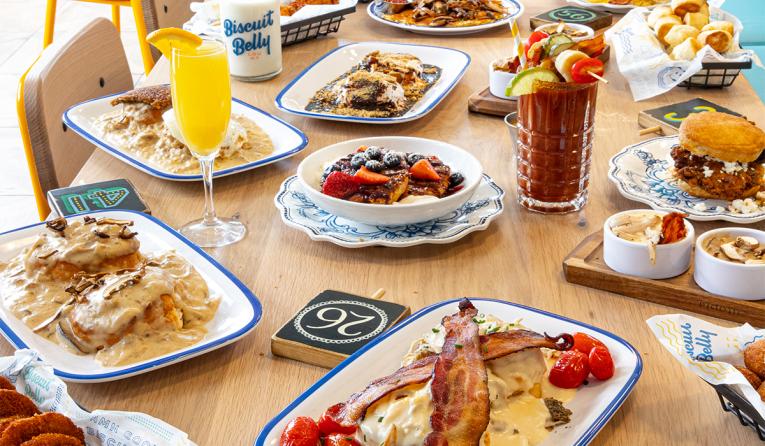 “When we say it's scratch-made, it really is,” says Lauren Coulter, Biscuit Belly's director of franchising and development. “Our people are making the jams and making the jellies and so I think some of that gets overlooked. We're just looking for somebody who knows the restaurant space, but is willing to trust that we have this plan and that we've done this well."

One store has a traditional drive-thru lane, although it hasn’t proven too fruitful because customers aren’t buying bigger items through that channel, Coulter says—like a coffee instead of a large, signature biscuit. The company’s off-premises mix ranges from 24 percent to 31 percent.

“Typically, they're getting on our app and they're ordering a big sandwich,” Coulter says. “We do offer a couple what we would call a little more traditional drive-thru options like just a chicken biscuit. We have some takes on our normal menu that are not quite as huge and just a little easier to eat in the car. It's been fun. It hasn't like blown out of the water. Our sales, the majority of them, are coming from in-store.”

Breakfast was hit particularly hard early into the pandemic because of customers straying away from their typical morning routine. But the daypart is now approaching pre-pandemic levels. In August, breakfast traffic grew 4 percent versus last year, and was within 1 percent of recovering to pre-COVID marks, according to The NPD Group. Quick service, accounting for 87 percent of this traffic, saw visits grow 5 percent year-over-year and 1 percent versus 2019. Thirty-seven percent of quick-service breakfast orders were sandwiches, an increase of 4 percent against 2021 and 14 percent compared to 2019.

For Biscuit Belly, pre-pandemic comparisons are a little more difficult to parse through because it only had two stores before COVID, the second opening December 2019. However, the chain is now beginning to lap price increases it implemented a year ago, and sales are still as high as 20 percent year-over-year.

“That's just wild. We're continuing to see the growth,” Coulter says. “I think we finally over the summer got into a decent place of people who are going to be going back are back. And I think that we've done a good job servicing them and keeping them happy and keep them coming back and definitely getting into the catering space a little bit more. Meeting people where they are has been fundamental I believe to our growth.”

Coulter recognizes the restaurant business isn’t for the faint of heart, so Biscuit Belly is searching for experienced food and beverage operators who understand the challenge. Preferably ones that already operate multiple concepts and are familiar with franchising relationships. Some current partners even have 28-30 stores, far exceeding Biscuit Belly's footprint.

There have been instances where the company brought in people who haven’t been in the restaurant space. After Coulter invites them to work a weekend shift, the reality hits pretty hard, she says. Biscuit Belly is more than a “pull it out of the bag” type of operation. That’s why consumers continue to be interested and sales keep rising.

“When we say it's scratch-made, it really is,” Coulter says. “Our people are making the jams and making the jellies and so I think some of that gets overlooked. We're just looking for somebody who knows the restaurant space, but is willing to trust that we have this plan and that we've done this well and also people who are willing to grow with us. Ideally, they will develop an area. We don't want anybody to be on an island alone right now and I just really think that's important for the growth of our company overall.”