Bojangles Dreams of Becoming the Next Global Chicken Brand

The chain thinks it will cross 1,000 stores in the next three years.

The first leg is foundation, which is about running flawless operations while maintaining speed of service, product quality, and maintenance of facilities. The next support beam is modernization—bringing relevancy to the brand, both inside the store and outside the four walls through an omnichannel strategy. The final revolves around growth of top-line sales and unit count.

That’s how Bojangles plans to expand beyond its 775 restaurants across 18 states. Right now, the chain is primarily known throughout the Southeast, with strongholds in the Carolinas, Virginia, and Georgia. But Bojangles wants to shed its status as a regional brand and promote contiguous growth to areas like Dallas, Houston, Orlando, Pennsylvania, New Jersey, and New York.

Bojangles wants to become a global chain, with goals of opening 100 restaurants per year.

“We have over-hired across the organization to be a national and international brand," Costa says. "Probably 80 percent of my time is focused on domestic growth. And as we embark into the second half of the year and 2022, the other 20 percent will increase on the international front. But we will be crossing the 1,000 mark in the next three years approximately. We want to be a national brand. That's what we're building toward, and the team we put in place, everyone we've hired—our dreams are big.”

The quick-service brand is in a position to accomplish those feats with three profitable dayparts and an AUV of $1.9 million. Bojangles is also in the chicken category, which Costa says is the fastest-growing protein domestically and internationally. To his point, chicken entrees at U.S. restaurants increased 4 percent in the year ending April 2021, according to The NPD Group.

The brand is setting this bar for itself almost three years after being sold for $593.7 million to Durational Capital Management and The Jordan Company. Before that, the chain was public for roughly three years. At the time of the transaction, same-store sales declined 0.2 percent in the previous quarter, with a 0.8 percent drop at corporate units and a 0.1 percent slip at franchised stores. To kickstart a turnaround, the chain rolled out a “restaurant portfolio optimization program” to close underperforming stores and refranchise others.

“We spent two years fixing processes, tools, and becoming a lot more analytical or scientific on our approach to go-to-market and building the right tools, processes, and hiring the right team,” Costa says. “And I think right now we're in a good place from the way we think about prospecting, screening franchisees, training franchisees. Our training program today is six months. [Before] the new team, it was a fraction of that number. We pride ourselves on identifying good operators, training them the right way, and empowering them to run great restaurants.” 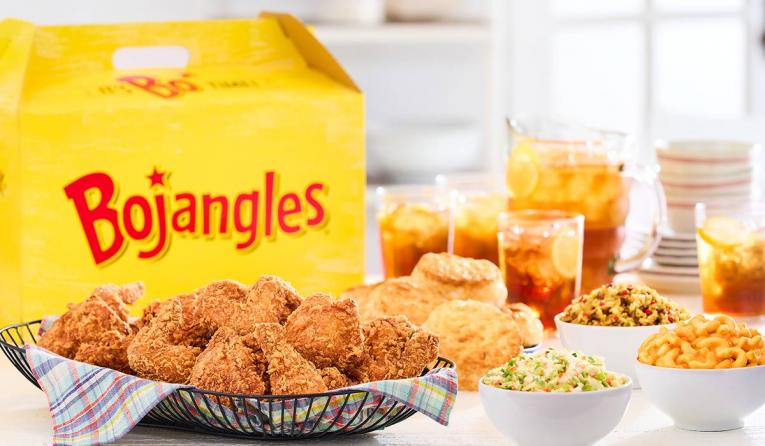 Bojangles searches for franchisees who work inside the restaurant each day and meet with customers and employees. It also prefers individuals/groups with capital, perseverance, and a large, diverse restaurant portfolio. Each new operator learns the ropes through a 26-week training course at the chain’s “Bo University” training facility.

The first big franchising deal of 2021 came when Bojangles signed a development deal with longtime franchisee Jeff Rigsby to open 45 stores in the next seven years. Rigsby, who has been a Bojangles franchisee for 20 years, will build stores in core markets Georgia, Kentucky, North Carolina, South Carolina, and Tennessee, and construct 15 units in new market Columbus, Ohio. In addition to this agreement, Rigsby acquired 16 company-run locations to become the largest Bojangles franchisee at 92 units. He’s projected to reach 100 stores by 2022.

A couple of months later, Bojangles announced a “40 and 40” deal with Chaac Foods to open 40 new stores and acquire 40 corporate locations. The new units include 20 in Georgia, five in Tennessee, and 15 in Orlando, Florida. The company-operated stores are based in Georgia, South Carolina, and Tennessee. Then in June, Bojangles signed franchise agreements with Sajib Singha and Asish Baidya of SAT Restaurant Group and Khalid Siddiqui of LASH Foods to open three stores each in the Dallas and Houston markets, respectively. While the franchisees grow those stores, Bojangles will add 15 company-owned stores in the Dallas-Fort Worth area. The first franchised stores are planned for the first half of 2022, and the first corporate location will debut as early as Q1 2022.

Of the franchisees approved to grow, 100 percent are expanding right now. Costa expects future development to be split 50/50 between new and existing franchisees. Company-run stores are expected to grow, as well. Bojangles currently has more than 270 corporate locations, and hopes to reach a point where it can open 30 per year.

“It just brings a different level of credibility when you're able to tell your franchise system that you are the largest franchisee,” Costa says. “It gives us the ability to understand and manage the P&L. It gives us the ability to understand the challenges of labor, of product shortages, of everything that we're facing right now when it comes to remodels and reinvestment and investing in new equipment and new technology.”

“A lot easier to say we are doing it ourselves for 275 restaurants versus some of the franchisors out there that are asking franchisees to write a check and they are not writing a check themselves,” the executive continues. “So we want to test everything ourselves first. We want to make sure it's the right decision for the brand. And then the conversation is a lot easier if we already have almost 35, 40 percent of the system that we can make that change.” 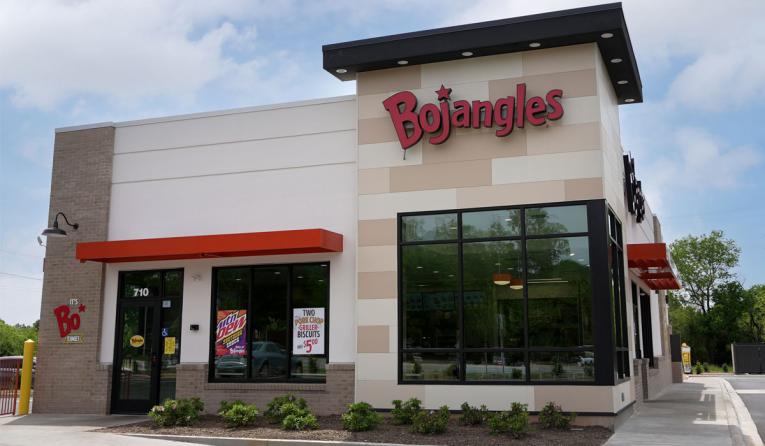 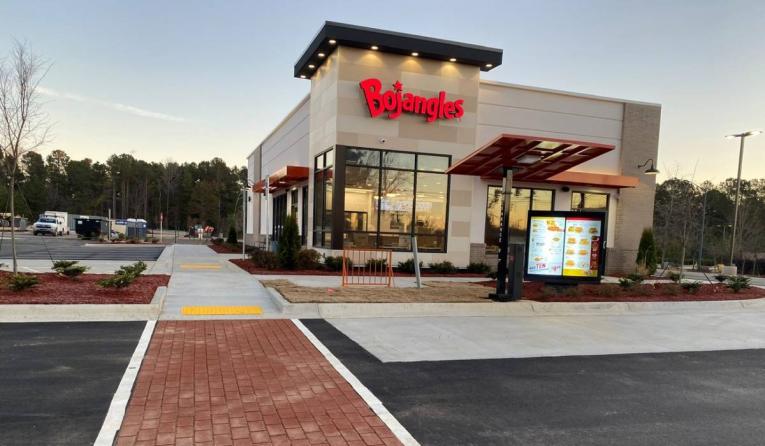 Bojangles provides franchisees with real estate flexibility with a host of development choices including the basic freestanding building—which comes in three different sizes—drive-thru only, endcaps, in-lines, express, and mobile units. In the next few months, Bojangles will test a ghost kitchen, as well.

While the chain goes after franchisees and development, it’s ensuring the brand remains relevant. In August 2020, Bojangles revealed that it was dropping the apostrophe at the end of its name and relaunching the brand with new advertising, packaging, menu boards, uniforms, in-store visuals, and a refreshed logo. CMO Jackie Woodard told QSR that Bojangles evolved its logo to “create more distinctiveness through an ownable, timeless design that leverages the colors it’s been known for over the last 40+ years. The majority of consumers, who participated in our focus groups, preferred the new logo. They said it strikes the perfect balance between incorporating Bojangles’ heritage and moving the imagery forward.”

The modernization won’t stop there. Costa says the brand is preparing to release a new design called “Genesis.” The Bojangles executive says the buildings will open in the next 60 to 90 days and are “completely different” from stores of the past.

The time to grow is now. Or as the chain loves to say, “It’s Bo Time.”

“The short-term dream is to be a national brand,” Costa says. “It's contiguous growth. It's dominating the trade areas where we serve our customers with different options from drive-thru only to in-line to endcaps—becoming a national brand and eventually a global brand. At our pace right now, we’ll cross the 1,000-store mark. From there it’s growing to 2,000, 3,000, 4,000 and so on.”

“And It's thoughtful. It’s supportive,” he adds. “It’s opening regional support centers to support our franchisees. It's owning a lot of company-owned stores, so we know what the P&L feels like and what the challenges are. And it's creating density so you can have enough marketing dollars to promote the brand and attract consumers."