Bolay Builds a Brand on Entrepreneurial Spirit and Family

Chris Gannon's father, Tim—the cofounder of Outback Steakhouse—has been there every step of the journey.

There’s a well-worn story of Tim Gannon’s lucky saddle. He sold it for $250 so he could muster enough money to drive to Tampa Bay and start Outback Steakhouse. He had $37 left in his pocket when he did so. Decades later, Gannon bought the saddle back for $2,200 after the seller asked for $22,000.

The saddle eventually was gifted to Gannon’s son, Chris, in front of a packed auditorium.

It just happened to be the same year Chris needed some restaurateur magic of his own. In 2015, Chris decided it was time to follow his father’s path more literally. He was a franchisee of a fast-food brand and firmly “in the business.” But he wasn’t an entrepreneur. Tim is best known in restaurant circles for creating the Bloomin’ Onion, arguably (although there isn’t much argument) the most famous appetizer ever concepted.

And Chris felt that familial pull. So he flew out to California and spent two weeks studying brands. He snapped 1,000 pictures and tried food across every category.

“I just went to dad, and I go, ‘dad, I think I’m ready to start a concept,’” Chris says. “He goes, ‘let’s do it.’ And I just remember thinking, really? You’re 68 years old and you still have that entrepreneurial spirit. Let’s do it. That’s the eternal optimist in him.”

Chris knew he had the pedigree and one of the best advice wells one could draw from. Yet failure was daunting, financially risky, and a very real possibility.

According to industry consultant Pentallect Inc., fast-casual sales growth slowed to between 6 and 7 percent in 2017 from around 8 percent the year before. Growth hovered between 10—11 percent in the previous five years.

So there was real evidence quick-service’s darling segment, surged out of the Great Recession’s lowered barriers for entry, which, in turn, inspired as many new concepts as it did retract overleveraged ones, was starting to crowd to the edges.

This was visible enough by Bolay’s name. What does it mean? It actually doesn’t signify anything specific. Chris, his wife, and his best friend, wrote it down on a napkin at an airport. “Try creating a name these days,” he says. “Everything is pretty much taken or used in a hashtag or something.”

Bolay’s future, however, was decided before its name was. Chris saw an end-cap, main and main site pop up on the market. He entered the ring with established competitors and tried to defy traditional odds. New concepts don’t generally even vie for A-plus sites. They start in B and C real estate and work up. Or pilot a food truck, or some other brand vehicle, to earn a reputation and bring that to a developer.

Chris didn’t have any of it. He sat in the office of the complex’s young landlord, told him about his idea, and won him over with passion. “I remember the iconic moment,” Chris says. “He goes, ‘what’s the name of this concept?’ And I go, ‘I don’t have that yet. But it’s going to be great. And I promise you I’m working on it and trust me, I will not fail.”

Chris believes if he didn’t get that lease, at that juncture, Bolay probably would not have started. It would have taken too long to find another one. Chris was still working.

“Looking back, the stars aligning and some things happen, and yes, everything comes down to hard work and knowledge. But a lot of things also have to have a little bit of luck,” he says.

Bolay took just six months to open, which it did February 2016 in Palm Beach Gardens.

After a recent Kendall, Florida, location the brand now has 17 stores, in just under four years.

And Chris credits his father in more ways than one. Tim, who also helped found chicken fast casual PDQ, didn’t just give Chris his entrepreneurial drive and blessing. He became “the uncle” in the room during Bolay's early days, Chris recalls. Tim would share anecdotes and advice, but never told his son what to do. Essentially, he was a family figure who wasn’t an authority figure. 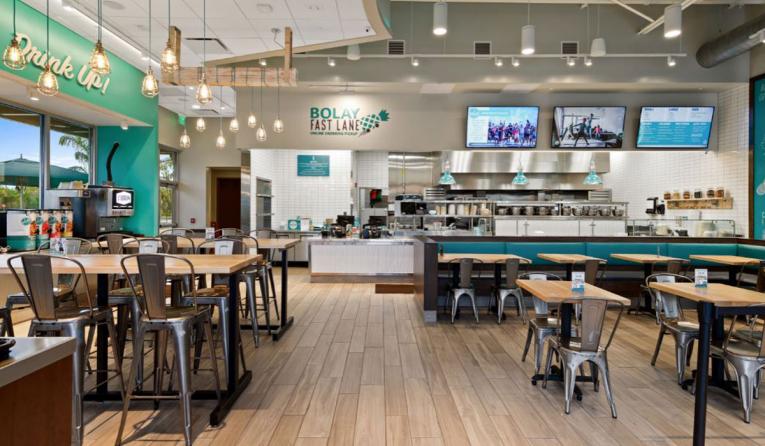 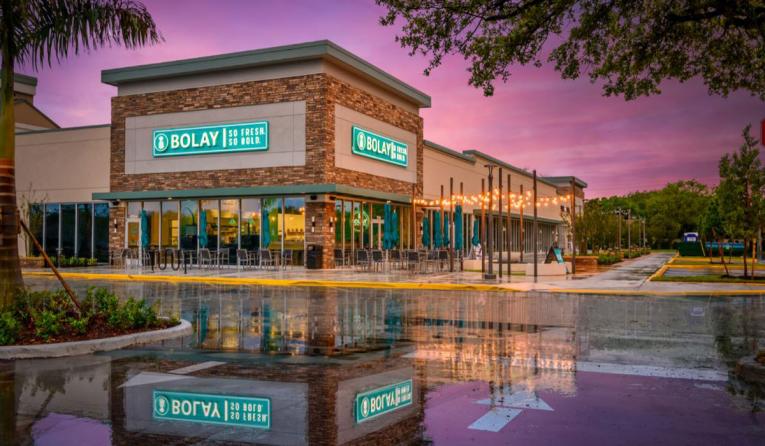 Bolay recently opened its 17th location and plans to reignite growth this year.

Chris realized quickly how detail-oriented restaurant creation was. Everything from the napkins to the color palette on the walls to cup sizes, portion control, pricing, and bathroom sink finishes. “There would be a couple [decisions] where I would just get to the end zone with and I needed another person to roll that idea off of,” Chris says. “And luckily, I had one of the greatest restaurateurs I know of, and that’s my father.”

Just this past year, Chris, who is 37 years old, was named an Entrepreneur Of The Year 2020 Florida Award winner by Ernst & Young LLP (EY US). It’s an honor Tim famously earned nationally in 1994 by beating out AOL. Other past recipients include Starbucks’ Howard Schultz and Chris and Robin Sorensen, founders of Firehouse Subs.

“To have a father inspire a son and have the son follow in the footsteps, and to be graciously humbled with the award, is just special,” Chris says.

What Chris appreciates most about the recognition is that it wasn’t a birthright, although it’s turned out to be something that runs in the family. Tim didn’t hand Bolay down to Chris. He wasn’t given the keys to “the family business.”

Instead, he created Bolay from scratch, just like his father did with Outback. “You can give somebody food or you can teach them to hunt. And my father taught me how to hunt in some shape or form,” Chris says. “And you can’t give your kid any better knowledge than to teach them how to go earn a living and go be an entrepreneur versus just hand them a business.”

Outback’s early imprint is all over Bolay. Firstly, the saddle is at the corporate office to be rubbed for good luck. But namely, it’s the culture angles Chris has tried to emulate.

In its first three years as a company, Bolay took team members to the Bahamas on partner trips. He tries to square away budget each year excursions.

Bolay also hasn’t sold to private equity or done any raises. They’ve scaled through bank debt and internal cash flow. “That’s the beauty I have, I got to see and watch Outback grow and understand their regional management teams and their systems and their processes and checklists,” he says. Naturally, Outback is part of Bloomin’ Brands publicly traded empire today. However, its managing partner system and early culture ticks were the stuff of restaurant legend.

Bolay says he studied the history, as well as that of Chipotle and Chick-fil-A. All to develop a people-first playbook that allows him to think forward. Chris says he looks three or five years in advance of every decision. And so he goes and hires for what he envisions Bolay becoming, not necessarily what it needs to survive on the day-to-day.

Chris’ wife asks him if they should be bringing in more money at this point. “Hey, no, we’re building [I tell her]. It’s a constant reinvestment into your people and into your physical plans and growing,” he says.

Bolay had an appetite to scale from the outset. It went from one restaurant to two in nine months. The following year, three opened. The next, four. Every year, Bolay doubled in size. It had five restaurants and then brought seven to market the following calendar.

It’s a Bolay tradition to dump buckets of ice water on new leaders’ heads, like the crew just won the Super Bowl, when they open stores. Chris says it’s a fun practice, or “hidden gem of Bolay,” but speaks to something broader as the brand continues to expand. “It’s just a sign of what our culture is deep within the roots of Bolay,” he says. “… Not just a culture, but a winning culture.”

After a COVID-19-strapped year, Bolay plans to go back on the offensive in 2021. Chris thinks they’ll open between 5–7 restaurants and then enter fresh markets in 2022. Bolay hasn’t left Florida yet. That should change. He hasn’t landed on a trade area, but is looking at a few Southeast options, from Atlanta to the Carolinas to D.C. to Nashville.

“But we’re going up in [2022[ and looking for talent,” he says, noting Bolay is searching for fresh hires, technology to construction to operational partners and area managers, as it plots course for the future.

“I urge anybody to check us out because we are growing,” he says. “We’ve got that Outback beautiful culture with our new fast casual great work-life balance spin.” 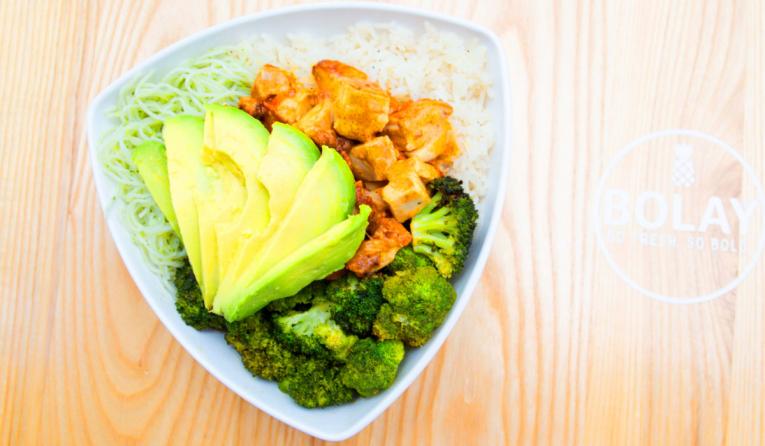 COVID puts Bolay to the test

This past year provided Chris the highest and lowest points of his professional career. Even Tim couldn’t offer a guidebook for coronavirus.

“The best advice he gave me, he goes, ‘Chris, just make this company the company you dreamed of. Take some time to rip off some Band-Aids on some things you didn’t have the courage to [before],” he says.

Bolay, being a fast casual, weathered the storm better than some restaurants. It had a digital presence and systems in place to serve off-premises occasions. And Florida was one of the country’s looser states in terms of restrictions, and one of the quickest to reopen (and stay open).

Still, Chris says he was often presented with a bad decision and a worse decision. So he’d write down his choice and ask what it would look like in three to five years so he wouldn’t knee-jerk react. “Take a moment, take a step back, and think about three to five years from now, and how much worse it was going to get,” he says.

As things improved, Bolay paid employees back their salaries, and even provided an interest payment it put it into everyone’s 401Ks.

Chris took that chapter out of Chick-fil-A founder Truett Cathy’s book. “I don’t do this to brag,” Chris says. “I tell you this because it was the best moment of my career so far.”

Chris says it brought Bolay closer as an organization because it was the first true test. The brand enjoyed pretty calm seas, relatively speaking, to this point. COVID forced Bolay to tighten systems and protocols and emerge a stronger company.

Bolay stayed open through the crisis so it could avoid the start-stop challenge that burdened so many operations. It was able to keep vendor relationships going because of it and Chris says they’ve paid everyone back “everything that was owed.”

“We probably have 100 vendors per restaurant. Each one of them relying on a small portion of us,” he says. “And that’s why we really pushed to keep the trickle on so they would have hope that there was still something coming small. Small is better than nothing.”

Coming out of COVID, the goal hasn’t changed. Bolay wants to mimic the low-and-slow growth model of culture-first brands.

“We’re back in the game,” Chris says.