Chipotle's CDO: We Have So Much Room to Grow

Chipotle is working on the customer experience, inside and outside of its restaurants.

Tabassum Zalotrawala surveyed the growth opportunity at Chipotle and saw plenty of headroom. But this wasn’t just a numbers game. As CEO Brian Niccol said in February, the brand’s new chief development officer was being handed unparalleled flexibility, by Chipotle’s standards, to think through access points. Among the many changes during Chipotle’s ongoing resurgence, this is where the biggest chance for further progress lies.

Chipotle is still in the early days of becoming a brand that delivers on convenience. Reducing friction across multiple channels has been one of Niccol’s top targets from the day he arrived and declared Chipotle “invisible” in the marketplace. Part of that was marketing and a need to lead culture, not react to it. It was also a reflection of where Chipotle fell behind counter-service competitors. Delivery. Loyalty. Online ordering. Drive thrus. These were all points of purchase glossed over during the fast casual’s up-and-down lifecycle.

Zalotrawala says she was drawn to the job first by Chipotle’s reputation and what the brand stood for—authenticity, transparency, and a commitment to ingredients unrivaled in its sector. But she wasn’t walking in selling food, which is why the fresh vibe and runway of Chipotle’s growing footprint was so alluring. Despite its history and size, the 2,500-unit chain, these days, has a very start-up feel to its structure. Beyond the new energy of the executive suite, the brand is doing things pundits probably thought it never would. And Zalotrawala’s role is front and center in changing that physical landscape.

“We have so much room to grow with innovation,” she says. “With the work that we’re going to do around the restaurant experience, this was an opportunity I couldn’t pass up.”

Chipotle laid the framework last year for a company-shaking 2019. Already, the results are paying off. On April 1, the brand hit a 52-week high on the stock market of $715.62—133 percent above its 52-week low. While Wall Street is a fickle mistress that doesn’t always mirror reality, the number tells a compelling story. That rise represented Chipotle’s highest mark since 2015, when a 14-state E. coli outbreak slashed more than half of its market cap. If you look back to November 2017, a PR hit from “Supergirl” actor Jeremy Jordan, who posted a picture on Instagram blaming Chipotle for an illness, sent the brand’s stock tumbling as much as 5.9 percent to $263, the lowest figure in almost five years.

The narrative has completely changed. Chipotle turned in same-store sales growth of 6.1 percent in the fourth quarter of fiscal 2018—its highest in six periods. It crushed analyst estimates of 4.49 percent. So did revenue of $1.23 billion, which sailed $1.194 billion. In response, the brand’s stock took a double-digit jump in after-hours trading that afternoon. 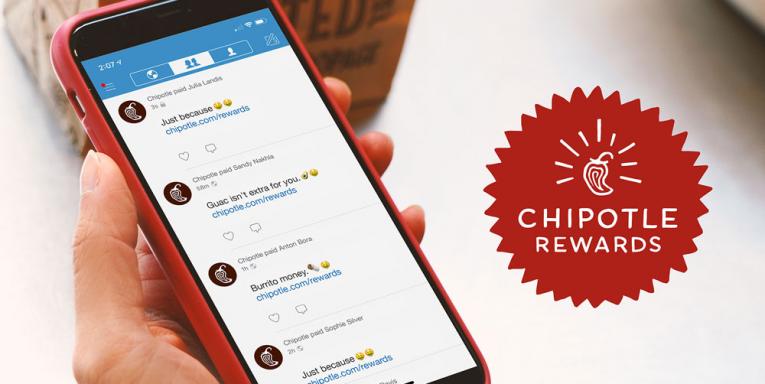 Either way, there’s definitely a new buzz around the legacy brand.

Zalotrawala says the excitement throughout Chipotle’s new California headquarters has been infectious. “There’s fresh talent and new energy, and there’s also existing talent that have true passion for the brand,” she says. “And there’s tremendous openness to evolving and innovating, which is unique.” 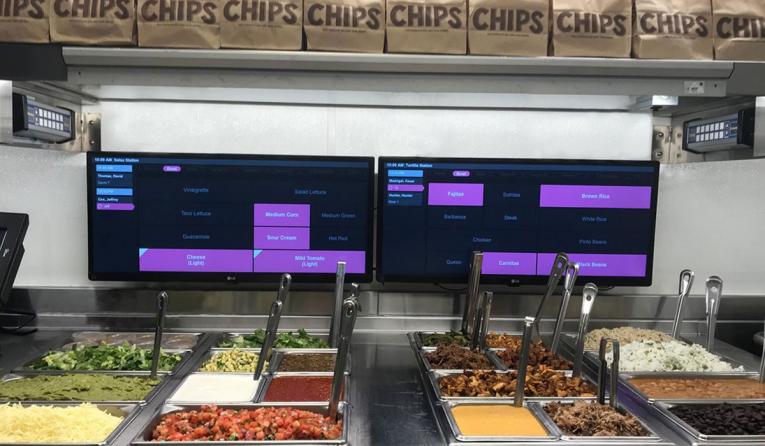 Second make-lines have made a huge difference for Chipotle this past year.

One of the biggest changes in 2018 was implementing tech-enabled second make lines throughout Chipotle’s system. In February, they were added to roughly 1,000 units, with plans to nearly complete the entire system by the end of 2019. They’re intended not just to speed up service and handle the extra volume of off-premises and digital orders, but also to improve execution. Chipotle digitalized many of the make-lines with visual screens that guide staff through the order to ensure that it’s more accurate.

Why was this so critical? As much as it was geared toward improving restaurant-level execution on the day-to-day, it was also a predictive play. Just look at these numbers. Chipotle could have been flooded in its own success without supporting infrastructure.

Digital sales boomed 66 percent in Q4, year-over-year, an acceleration from the 48 percent it saw in Q3. Digital sales totaled $158.6 million in the quarter and represented 12.9 percent of sales.

And this was all pre-loyalty program.

It comes back to accessibility and convenience, Zalotrawala says, and improving throughput for operators while also satisfying a changing consumer. These factors are becoming increasingly important as times shift for Chipotle. Channels are opening up that were brick-walled before. Whether it’s people dining inside, picking up, ordering online, or accessing third-party, there’s far more chaos in each location than there used to be. There was a time when Chipotle’s biggest issue was trying to keep lines of customers moving in store.

“It becomes that much more important now to create an experience that’s seamless. Regardless of where you’re dining or operating, we need to make sure they have a good experience,” Zalotrawala says. 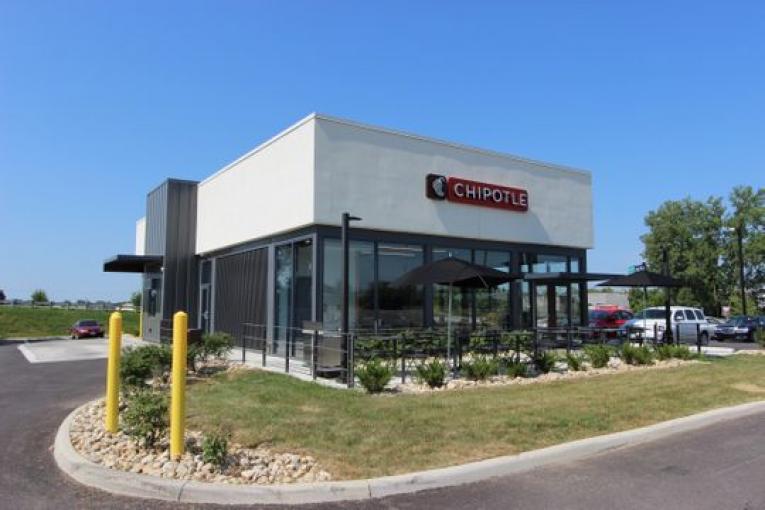 There's no ordering at Chipotle's new drive thrus. It's strictly for digital pick-up.

Chipotlanes are a vibrant example. The brand famously bucked this quick-service staple for decades because, essentially, it was too fast-food-y in nature. Chipotle didn’t play in that space and saw the drive thru as one area to take a stand. Yet a new generation of guests, one that often values speed over human interaction, called for a rethinking of past principles. Chipotle could meet guests here, in the drive thru, but also do it according to its own terms. In February, Niccol said, there were 10 restaurants testing the Chipotlanes. Unlike typical drive thrus, guests order ahead in the app or on Chipotle’s website, similar to how Dunkin’s next-generation model caters to rewards members. It provide another access point at the restaurant where a customer doesn’t have to get out of their car. They just pull up to a window. An employee has a quick conversation with the guest. It’s a set pickup time. “And then what happens is, literally, it’s like, I’m here for my burrito. Out the window comes your burrito, and you never get out of your car,” Niccol said.

Early tests showed a higher mix of digital sales and total restaurant business. Chipotle plans to build a few dozen more this year, with a mix of freestanding and end-cap builds. This will, in part, lift new restaurant investment by an average of about $860,000 in 2019.

Basically, Zalotrawala is looking through an open door at what Chipotle could become. That includes where it can grow and what the new fleet of stores might look like, which is something you couldn’t say about Chipotle for some time.

“We continue to hear this: The No. 1 reason that consumers eat elsewhere is because they don’t have the convenient access to Chipotle,” Zalotrawala says. “So there you go. Now, we’re developing those means and ways to make it more convenient. And really my role, I have laser focus on advancing Chipotle’s continued growth. Not just the numbers but really creating a restaurant experience no matter what venue type it is. Create a seamless experience for both guests and our operators.” 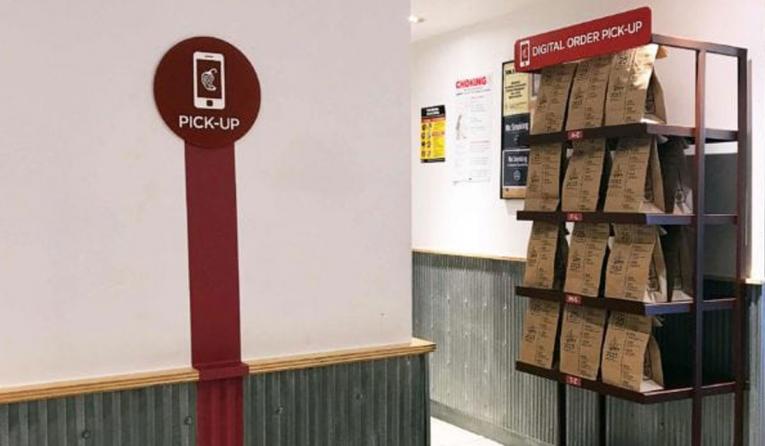 Chipotle's pick-up shelves serve as marketing tools as much as logistical ones.

Niccol tells the story of a downtown Denver restaurant that cut a window into the wall near the kitchen door, not far from the register. The operator put a digital pick-up sign above and suddenly saw digital sales boom double digits within the first few weeks. In addition to the accessibility, it was an in-store marketing tool that courted awareness. Chipotle dived into the issue systemwide and found that more than half of its customers had no clue they could even order ahead for pick-up. Given the brand was working on launching delivery at the time, among other changes, this was a pretty alarming disconnect.

Chipotle looked at adding similar windows and realized it wasn’t logistically feasible. Instead, it devised self-serve shelves and a sign overhead.

Like the tech-enabled make-lines, Chipotle’s new leadership set about installing these digital pick-up shelves last year. They were also in about 1,000 units by February, with plans to hit all locations by mid-2019. The main goal is for customers who order online or via the app to be able to walk in and easily find to-go orders. The collateral effect is showing in-store guests they can do so.

Zalotrawala says installing both elements has been a monumental task. “But everyone understands and appreciates how important this is for the company,” she says. “So I think as you start to see our new restaurant openings, what we’re excited about is, how do we integrate some of these key pieces into our store design. Our existing restaurants weren’t built for these points, these channels of revenue. But our new ones will be.”

Chipotle can now integrate these changes and also think ahead about what the guest might want, or how the foodservice experience needs to change in the coming years. Really, the CDO post at Chipotle is, in many ways, more dynamic than it’s ever been.

In June, Chipotle announced it would close 55–60 underperforming locations as it revamped the system. The brand reached the 2,500 milestone in February and said it’s growth trajectory was back in the fast lane. It plans to open 140–155 restaurants this year. Much of that will be weighted toward the second half of the year—10 percent in Q1, 25 percent in Q2, and the rest thereafter.

And as Zalotrawala noted before, many of Chipotle’s innovation spots will follow a new-build approach, including drive thru. “Chipotle does not have a one-size-fits-all business model,” she said. “So the way the concept is designed gives us tremendous flexibility to be in various kinds of venues and various sized footprints, and I think there’s the beauty of this.”

Where to Turn for Menu Innovation? Try Getting Creative with Sides
Burger King to Enter Chicken Sandwich Wars, Two Years in the Making
Menu Innovation Hasn’t Missed a Beat at Noodles & Company

The Role of Private Equity in a Post-COVID Landscape
There’s Always Room for Another Great Restaurant
Restaurants in 2021: Technology and Hospitality Search for Balance