The first test locations are scheduled to open in March 2023.

Web Exclusives | April 20, 2022 | Ben Coley
Focus Brands
The menu will include classics from Cinnabon and Carvel and a mashup of both brands, like a Center of the Roll Sundae.

The love for Cinnabon is strong, says Kristen Hartman, president of special category at Focus Brands.

Consumers have repeatedly told the company more access is necessary. As it stands now, the chain is historically linked to nontraditional locations—most notably mall food courts and kiosks. That space has served Cinnabon well over the years, Hartman says, and there’s plenty of whitespace for additional locations.

But there’s a big world outside of malls, airports, and travel centers. As Focus navigated through the pandemic, the company felt it was time Cinnabon move to the streets and play bigger than its 37-year legacy.

“As we started to think about that, we thought, OK, we want to continue to grow in the right malls and nontraditional locations, but moving streetside meant that we wanted to really take the opportunity to expand the brand and what it stood for and the number of times people would visit,” Hartman says.

The conversations have been years in the making. Focus leveraged consumer research to understand what people thought of each specialty brand individually (Cinnabon, Auntie Anne’s, Jamba, Carvel) and how they might perform branded together.

When Cinnabon and Carvel as a bakeshop/creamery was suggested, Hartman says the idea “just lit people up” in online focus groups. The participants ideated with Focus, helping it formulate what this concept could entail.

Out of those meetings, Cinnabon Swirl was born.

Instead of creating two signs as seen in typical co-branded concepts, Focus went with “Cinnabon Swirl” as the main attraction and “Featuring Carvel Soft Serve” as the secondary piece to expand customers’ minds, Hartman explains.

“We wanted them to see the sign and go, ‘Hmm. I know I love Cinnabon, and I love Carvel and I love ice cream, what's in there?” the executive says. “It sets off that idea of discovery and exploration.”

Cinnabon will have its classic rolls and either Minibons or BonBites, while Carvel will have its cones and cups. Potential new menu items include peanut butter and jelly and mint chocolate chip ice cream sandwiches and mashups of Cinnabon and Carvel, like a Center of the Roll Sundae.

The concept's architecture and decor will feel like a “beautiful marriage between the two brands” in terms of space and color palette, Hartman says. To develop this vision, Focus partnered with Sterling-Rice Group, a consultancy agency that’s played a role in brand refreshes for both Cinnabon and Carvel.

“They really had all of the thinking behind both of those brands, so they could bring it together,” Hartman says. "I want it to feel like a community gathering place. I want it to be where friends and family can come together and just enjoy some Cinnabon goodness and some ice cream. So that gathering aspect is important. I think that it should be a place that kids want to go after school, families want to go in the evenings, families want to go on Saturday or on Sunday—just that little sweet treat retreat.” 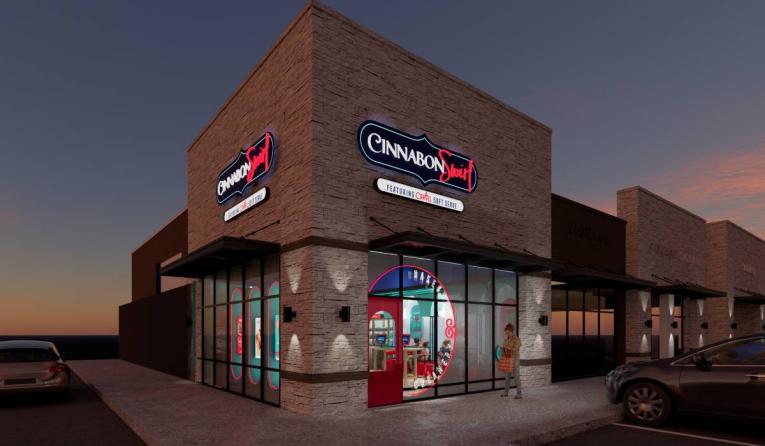 Focus is planning to roll out a couple of test locations in March 2023. The company is currently turning renderings into actual building prototypes, operationalizing all aspects of business, and identifying potential franchisees, who will likely be existing operators.

Exact geography hasn’t been determined yet. The East Coast, Northeast (Carvel’s core market), and Florida have all been considered. At the same time, Hartman says franchisees from the Western U.S. are “super energized” about the concept.

“What we know about Carvel is that people in the Northeast and Florida and other parts of the country, they know and love the brand, but our ability to expand outside of core territory for Carvel, that is the opportunity that Cinnabon unlocks because Cinnabon has such broad awareness and there's a draw to Cinnabon, and so that will help Carvel grow in non-core territories,” Hartman says.

“The advantage for Cinnabon is the advantage of ice cream,” she adds. “It's just such a big category. It's going to add frequency. When you put the two things together, that's where you really capture people's imaginations.”

Cinnabon Swirl was revealed to the entire Focus system in early April during the company’s biennial global conference in Orlando. As part of a food expo one night, operators had an opportunity to visually grasp what Swirl will look like and taste some of the potential menu items.

At that culinary event, Hartman recalls many discussions with franchisees who said they know of the best place to put a Cinnabon Swirl.

“It made me super happy,” Hartman says. “Everyone that we've shown this to, including consumers or people internally, like our board, everybody's reacted in such an enthusiastic, positive way. So I was feeling like we were going to get a lot of positivity from the franchisees, but it was really gratifying to see the positive response that we got.”

Although Cinnabon will soon move to new pieces of real estate, that doesn’t mean mall setups will disappear or be ignored. Similar to the restaurant industry, which saw hundreds of thousands of stores close during the pandemic, the executive believes there will be a reshuffling among malls, with the poorest-performing units shuttering. The additional demand will strengthen the locations left standing.

Hartman has seen this movement in action, with stores based in C-rated malls experiencing successful sales. Outlet centers are seeing favorable results, as well, because of customers gravitating toward the outside shopping environment. Hartman also notes that major developers like Simon Property Group are continuing to invest and fortify these spaces with the right type of retail. 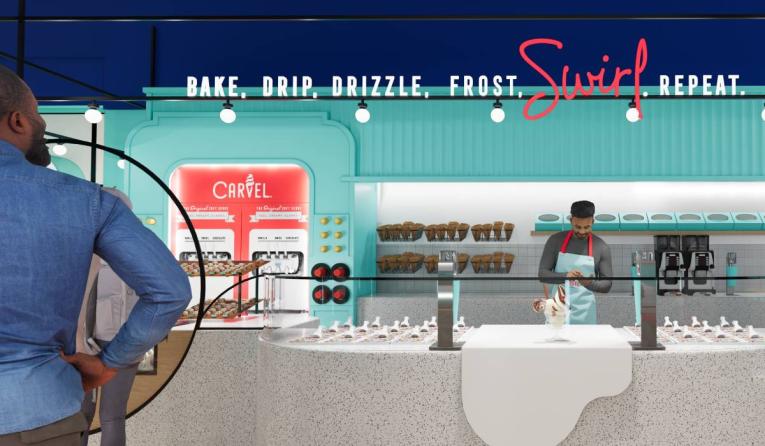 Cinnabon Swirl will likely enter the mall space in addition to traditional units.

“When we were conceiving it, our head was solely on this being streetside, but when we presented this to those first franchisees, they were the ones that schooled me, and they were like Kristen, this has a place in malls and we're going to need more space for it than the typical Cinnabon,” Hartman says. “The square footage will need to be a little bit bigger, but they're like, this has the potential unlock for more business in malls, so let's make sure that's a part of the plan.”

Those same operators also let Hartman know that drive-thru should be part of future development plans. Hartman foresees indoor or patio seating and an experiential atmosphere for Cinnabon Swirl, but she also recognizes convenience has becoming an overwhelming consumer preference during the pandemic. Drive-thru, which represented 52 percent of off-premises traffic in the year ending October, increased visits by 9 percent year-over-year and by 23 percent versus two years ago, according to The NPD Group.

Most of the planned menu items will work well through the channel, and a big percentage of business will be retail, such as Cinnabon’s Cinnapacks and Carvel's multi-serve ice cream cakes, pints, and sandwiches. The pent-up demand already exists, Hartman says. In Prescott, Arizona, Jamba and Cinnabon are beside each other in a shopping strip, but only Jamba is available via drive-thru. The franchisee says 15-20 cars per day ask to order Cinnabon via drive-thru.

“Once we get the prototype done for the first location, we're definitely going to start working on how we would add a drive-thru,” Hartman says.

Focus is continually researching how its specialty brands fit together. The company went through a similar process with Auntie Anne’s, a brand facing more saturation in malls than Cinnabon, Hartman says.

The group paired the pretzel concept with Jamba, and opened a streetside location in Atascadero, California, toward the end of 2019. Focus followed that up in 2021 with Auntie Anne’s first drive-thru in Wylie, Texas, in partnership with Jamba. In some instances, like densely urban New York City, there’s opportunity for tri-branding, like Auntie Anne’s, Cinnabon, and Carvel.

“We feel like we're in this really fortunate position because we've got these four amazing brands,” Hartman says. “I get really excited when I think about the potential that we unlock through what we're doing with dual branding. It will never be instead of opening our standalone locations. There's so much room for growth for those; it's just in addition to all of that growth that we're already experiencing.”