April was the company's best month on record.

While COVID was unfortunate in countless ways, there were some benefits, says Clean Juice CEO Landon Eckles.

What he means by that is, individuals thought more about their health and how they can improve their state of being. They’ve seen people get sick from viruses due to underlying issues. Eckles knows that as well as anyone since he and his wife, Kat, founded Clean Juice five years ago as the first and only USDA-certified organic juice bar franchise.

The numbers don’t lie, either. The 105-unit chain exceeded expectations by increasing same-store sales 7 percent in Q1, including a 24 percent lift in March. The second quarter is shaping up to be even stronger. April was the best sales month in company history, and it appears May is going to quickly re-set the record.

“People are starting to take their health into their own hands, which is what we're there for,” Eckles says. “We want to provide a healthy product. Instead of going out and get a cheeseburger and fries for lunch, come get a smoothie, come get an acai bowl. People can get a wrap. All certified organic and super healthy. ... And so there is this big trend towards health and wellness, and I only think it's going to increase, and that wave is just going to keep growing.”

Like most brands, digital channels played a significant role in Clean Juice's record-breaking growth. Off-premises mixes more than 30 percent, and third-party delivery is a crucial part of it. Clean Juice launched delivery about a year and a half ago, and now it’s earning roughly $200,000 per week through those channels. The brand partners with all major third-party players as well as delivery through its native web/app.

Eckles also attributes Clean Juice’s success to menu innovation and expansion. When the chain conducted a national market research study, the company performed well in terms of how consumers feel about the brand, but respondents also made it clear they want more options. That’s a message Clean Juice took to heart—the chain is more than just a juice bar, Eckles says. It is creating more awareness around its wraps, salads, and acai bowls, which consumers gravitate toward during the lunch daypart.

In March, Clean Juice introduced dragon fruit as its spring LTO, with a pitaya-based smoothie named The Spring One, and a seasonal acai bowl called “The Dragon Fruit Bowl.” The brand also rolled out a Create Your Own combo option and a new Breakfast Combo that gives guests the choice of a Breakfast Wrap and Purity Coffee or Avocado Toast and Purity Coffee.

Another budding growth driver is the new Cleanse Club subscription launched in January. Eckles says Clean Juice has always offered juice cleanses, but never in a structured manner. The subscription program fixes that and allows guests to purchase juice cleanses, pick them up each month on a certain day, and develop a consistent routine. There’s a beginner program that includes four cold-press juices featuring Orange, Sweet Green, Yellow, and Red organic juices. Then there’s the standard program, which lets customers select six cold-pressed juices among four choices: The Original Cleanse, The Immunity Cleanse, The Energy Cleanse, and the Anti-Inflammatory Cleanse.

“It's grown every single month, which we're excited about,” Eckles says. “I think as we do things to promote that offering and to just create more awareness around it is really important. We understand that there's a little bit of education piece just in terms of not just educating around cleanses, but how the whole program works, and so it's taking a little time to build that to educate our guests. But as they're learning more about it, they're signing up more for it, so that's the goal.” 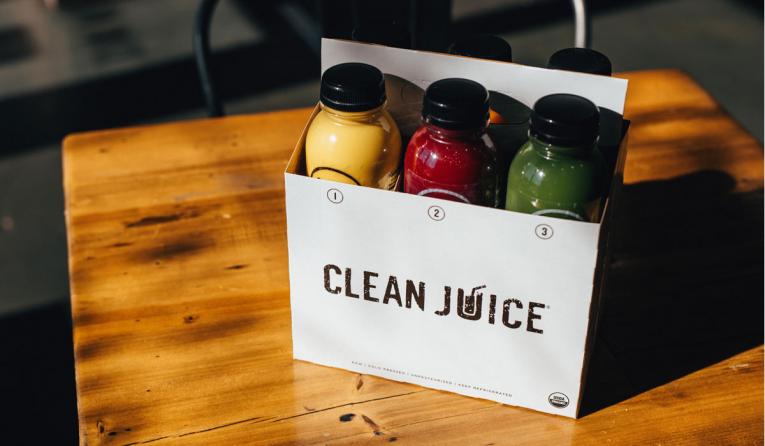 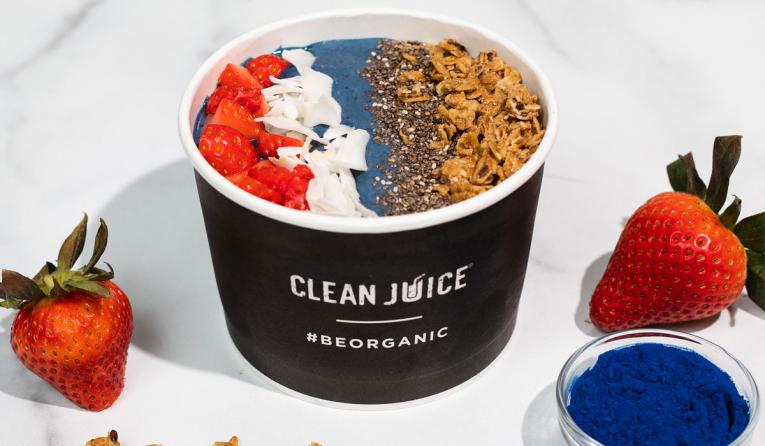 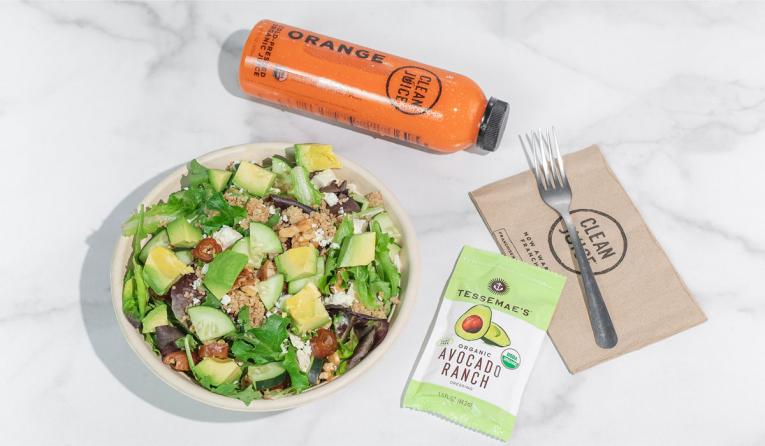 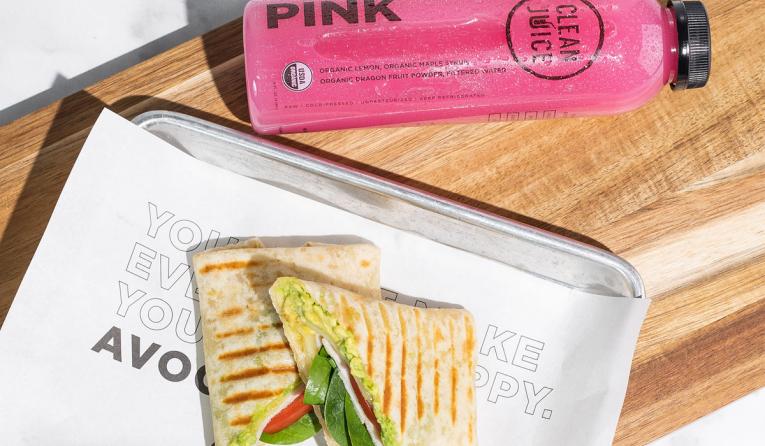 “We just want to keep giving guests what they want,” Clean Juice CEO Landon Eckles says. “We want to give you a great experience. We want to give them the type of food they want, all around being healthy and organic, which is our mission."

Because of the soaring sales and increasing consumer interest, franchisee interest has never been higher, Eckles says. Typically, Clean Juice brings in franchisees who have never run a franchise or owned a restaurant before, but the passion is there. Many times, they can only afford to open one store. But now, many operators are beginning to look at future development and buying even more locations this year. In 2020, the chain opened 29 franchise stores and it projects 35 more for 2021.

In Q1, Clean Juice awarded 15 locations—25 percent more than what it expected. Eckles says the chain is on pace to surpass that number in the second quarter. The company has 60 locations under development, leading the CEO to believe Clean Juice will have its best year ever when it comes to development and awarded units. Clean Juice is open in 23 states, and has awarded locations in 28. The brand prefers to plant a flag in a certain market and then open multiple units in the area to build brand density. The company finds that when several locations are open, guest acceptance accelerates and supply chain becomes more efficient.

“We will occasionally open just one store in a market, but many times it's because we have a franchise, he was doing multiple units to get the first door open, and then they have several in development behind it,” Eckles says. “So we want to grow the territories that we’re in as well as looking at new territories that makes sense for us from a logistics standpoint and demographic standpoint.”

Of the 105 open locations, 13 are company-run. Clean Juice is planning one corporate location within the next year, which will include a celebrity partnership. The store will be in Florida, where the company already owns four stores. Going forward, Eckles expects the franchise/corporate split to remain about 90 to 95 percent.

“I do believe that we need to own and operate and run our own stores just so we always have our thumb on how the operations are going, our thumb on the challenges that are out there,” Eckles says. “I think that it's really hard to sell a business that you're not running. So even if it's a smaller amount, we will always own stores here at Clean Juice. They do provide a nice income back to the company. And so, it is a part of our strategy, but at the same time the franchise buzz and opportunity and excitement is there. It's just we can scale the business faster through that, and so that's a massive focus of ours.”

It’s true that Clean Juice is surging, but that doesn’t mean it isn’t feeling the ongoing labor crisis. Eckles believes the situation will change soon, especially with students returning home from college. The turning point is particularly key for Clean Juice since summer months are usually its highest sales months. Supply chain has been affected too, but the CEO knows Clean Juice doesn’t have a unique problem. Like he says, “If Chick-fil-A can be affected by it, we can all be affected by it.” The good news is that the issues are minor and haven’t changed business in any material way.

It’s a cliché, but Eckles truly believes “the sky’s the limit” for his brand in 2021. Clean Juice is continuing to answer the call for menu diversity by testing new categories like toasted sandwiches and super sides, not to mention the "incredible brand partnerships" that are forthcoming. He’s confident 2021 will be Clean Juice’s best year on record, and he’s willing to bet 2022 will be even greater.

“We just want to keep giving guests what they want,” Eckles says. “We want to give you a great experience. We want to give them the type of food they want, all around being healthy and organic, which is our mission. We feel like if we can do that and partner with great franchises along the way and put them in awesome locations that Clean Juice is definitely going to continue to build that national presence that we're building.”