The 87-unit brand plans to open its first drive-thru this year—far ahead of schedule.

Web Exclusives | April 15, 2021 | Danny Klein
MOOYAH Burgers, Fries & Shakes
Accessibility has been everything during the past year-plus of COVID-19.

MOOYAH president Tony Darden is among those restaurant leaders who believe consumer behavior has changed for good. Yet it’s not the “new normal” after-shock so many prescribe to. Guests will return to restaurants as vaccines spread and herd immunity materializes, he says. They’ll start gathering in groups again.

But where they won’t revert to pre-pandemic ways is convenience.

“At the end of the day, folks, the convenience that people experienced through the pandemic, whether that be through third-party delivery or drive-thru or curbside, we believe that is going to continue to drive people’s behavior,” Darden says.

Darden’s sentiment was echoed in a recent report from website, e-commerce, and marketing company BentoBox. The company polled roughly 1,000 diners and found that even as restaurants begin to reopen in-person service, consumers are not going to simply change their habits when it comes to takeout and delivery. A year-plus long trend isn’t going to dissolve.

Despite more restaurants reopening and warmer weather returning, nearly eight in 10 (79 percent) current delivery/takeout customers said they would continue to order at the same frequency they do now.

Three of the culprits behind this reality, or why customers planned to maintain present behaviors, was vaccine eligibility (25 percent, and this should improve), hesitancy to resume normal dining habits (34 percent), and convenience (74 percent).

As Darden suggested, there are factors in this movement, and then there’s the lasting trigger.

According to BentoBox, convenience was “especially important” for diners who order out most frequently, as 86 percent of consumers who order takeout or delivery four times per week picked “convenience” as their main motivation. Ease of ordering was highest among the 35–49 (50 percent) and 50–64 (55 percent) age groups.

It’s an understandable reaction, Darden says. When COVID-19 clamped dine-in channels, it forced guests into new ones. And in a lot of cases, ordering options they won’t abandon just because they can. Once you order ahead via app and pick up off a shelf, for instance, will you want to queue in line again?

“Think about it. The convenience of being with your family and being at home, with everybody working from home, nobody wants to go out and get dinner,” Darden says. “Nobody wants to go and get groceries or have groceries delivered, so you just order a meal that’s fully ready, shows up at your door. I think it allows for more things to happen in that family dynamic.”

For MOOYAH, the 87-unit chain was fortunate enough to have delivery rolled out across its system by the end of 2019. A partnership with Olo and its Dispatch platform, loyalty, curbside, and online ordering were all key elements of 2020’s pandemic response.

However, COVID compressed elements of MOOYAH’s five-year plan to win. Namely, one lead initiative Darden jotted on a whiteboard in his office back in 2019—the concept of adding drive-thru.

Initially, it was likely a 2022 project for MOOYAH. But thanks to COVID’s acceleration, MOOYAH plans to bring the first to market later this year, with two or three, potentially even four, open by the time the chain enters its fiscal Q4. 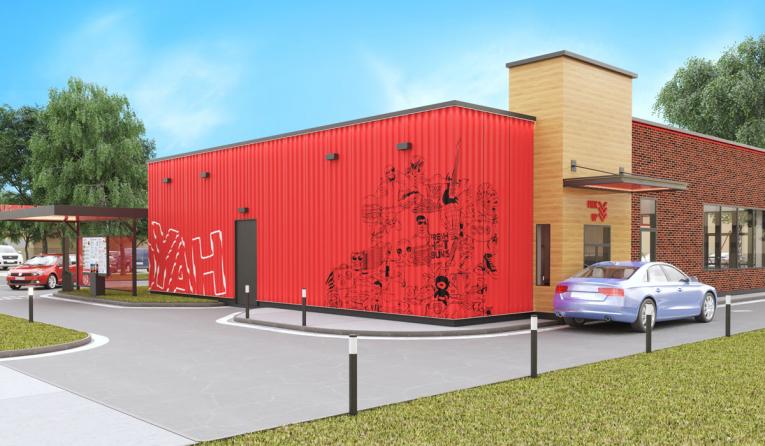 MOOYAH's drive-thru will focus on the guest experience.

“Obviously the urgency of the pandemic, consumer behaviors, pulled that forward for us,” says Darden, who joined MOOYAH in May 2019, succeeding Michael Mabry. Darden previously served as COO at Taco Bueno. Before, he worked 10-plus years at Panera Bread.

MOOYAH’s decision, while sped up, won’t be rushed. One of the reasons the brand was ready to move forward was because of where it is now. Darden says MOOYAH hit 2022 goals already for digital and loyalty transactions (digital mix is sticking about 10 percent higher, year-over-year, in reopened stores). And it tightened operations in an effort to lower wait times, thanks in part to better employee scheduling and an investment in upgraded cooking equipment that makes burgers faster and heats up quicker between orders. New grills offer more usable space to handle added volumes. Larger fry stations, too. “Those things allow us to have the capacity to execute larger hours,” Darden says.

Additionally, although not “earth-shattering news,” he adds, MOOYAH implemented a new kitchen display system that provided corporate visibility into franchisee’s speed of service. The KDS gave MOOYAH a window in. With that data in tow, it could now target areas of improvement, spotlight throughput, and make sure something like a drive-thru was feasible without sacrificing quality. Communication between cashier and kitchen improved. Darden says the KDA enabled employees working the register to completely focus on the guest to make sure they get the order right.

Pre-rollout, MOOYAH employees would talk to customers, turn around, and call down those orders. It was a cool, unique, and fun process, Darden says, but it wasn’t ideal for the future. “We believe, and I believe, that predictably is important and in order to scale MOOYAH, we’ve got to be predictable in terms of our guest experience, our speed of service, the accuracy that we have,” he says.

To the labor point, MOOYAH introduced scheduling software so operators could coordinate and deploy hours more effectively. To make sure peak hours and shoulder periods were staffed correctly. Having the right people in the right places at the right times, Darden says.

Darden says, fully staffed, it should take MOOYAH another three or four employees to run a drive-thru location.

Essential in that process, though, will be trying to replicate MOOYAH’s brand strengths at another ordering point.

An example is Chick-fil-A, a brand that often ranks toward the bottom of speed metrics in drive-thru studies. Yet it’s guest sentiment scores are always through the roof.

“They’re just so busy and people stay engaged. And they engage you,” Darden says. “They’re certainly one to model yourself after in terms of how to do that.” 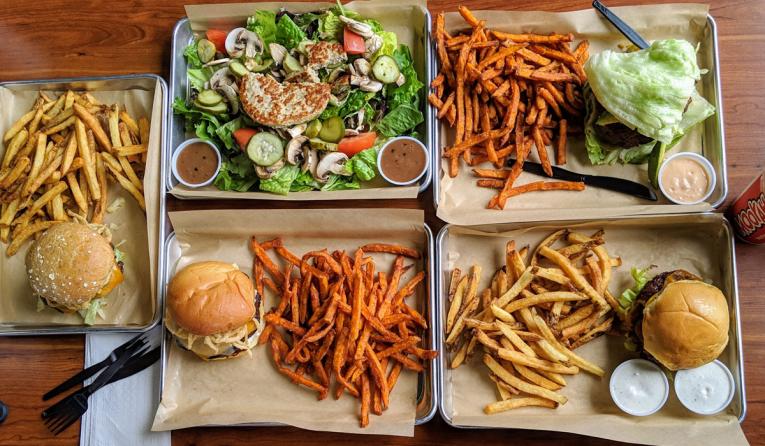 MOOYAH's better-burger standing it something it continues to guard closely, and will do so at the drive-thru as well.

In one specific element, MOOYAH will open drive-thrus with technology to take orders and payment outside, like Chick-fil-A, In-N-Out, and others. Employees roaming and “busting the line,” to better the overall experience.

“But it really boils down to hiring, and as franchisor our job is to give our franchise owners the tools from an end-to-end perspective, in terms of sourcing and hiring and training and developing their team members so that by the time they come through and have interacted with all of our development tools, they’re a brand ambassador for MOOYAH,” Darden says. “So whenever we train our folks, we push to have them come out of that program as brand ambassadors.”

It’s something that will be a top-down directive. However, it has to feed itself from the bottom up, or it won’t endure.

These guest-facing employees will need to believe in the quality of food, experience, and what MOOYAH stands for. And that’s what will fuel the chain’s drive-thru training and hiring mindset.

“If you want a competitive advantage in the drive-thru, obviously technology is there and food quality and speed of service and all that—those are pillars. But the thing that differentiates that experience are the folks who take you through the ordering process and then deliver your food and take payment and things like that,” Darden says. “We’re focused on that part of it.”

Drive-thrus, at least currently, won’t be a retrofit program for MOOYAH. The company will focus on new builds, preferably end caps with a drive-thru. It’s also in current talks, Darden says, with people about freestanding locations.

MOOYAH also ignited a model refresh program in 2019 through a partnership with Madrid-based company Livit. It addressed third-party delivery flow, creating separate entries and exits for off-premises and dine-in, plus a closed-off kitchen. Digital menuboards and modular seating arrangements were part of the build as well.

Renovations have been completed at five locations so far, with plans for another 10 this year.

Of the drive-thru prototype, Livit said in a statement it’s “drawn on the brand personality to generate the materials and graphics to achieve a perfect match with the interiors to build a strong emotional connection with guests and create a holistic 360 degree guest experience.”

Like a lot of chains at this current COVID juncture, the most beneficial real estate available appears to be second-generation sites. And brands riding momentum could have a leg up getting in.

MOOYAH plans to be one of them. The brand started to comp positive, year-over-year, in August. It hasn’t gone negative since, and was up 5.6 percent in its most recent period, according to a recent FDD.

Looking on a two-year basis (to factor in 2020’s strange nature), MOOYAH is up more than 17 percent.

Just one of MOOYAH’s 87 restaurants are company-run. It expects to open 15 total locations this year, with half coming from current franchisees. Darden says MOOYAH plans to open 20 next year and 23 after that.